Poltorak - Poroshenko: "Peter, do not!"

April 11 2018
37
The statement of Petro Poroshenko about the regular change of the format of the punitive operation was perceived both in the Donbass and in Ukraine as an obvious threat to the people's republics. 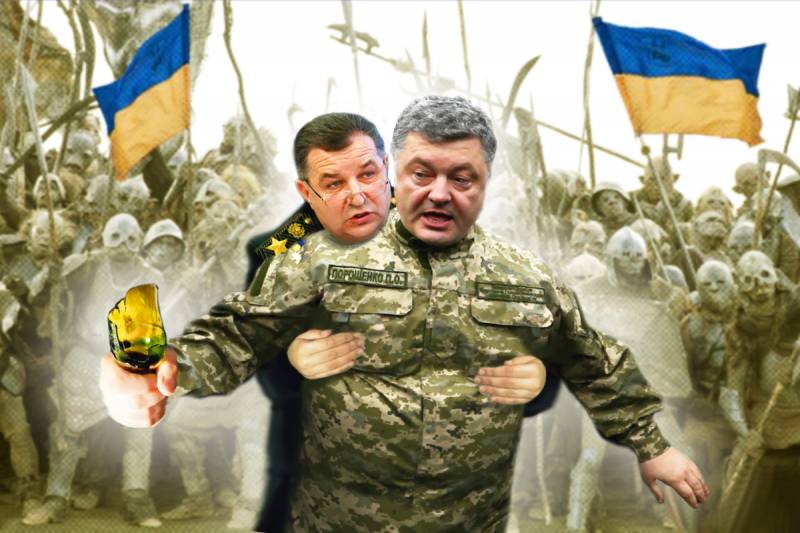 Recall that the leader of the Kiev junta at a press conference in Vinnitsa said the following:

“The date of completion of the ATO will be in May. Because we are moving to a different format of the country's defense in accordance with the adopted law on the reintegration of Donbass. We are introducing completely new, more effective measures using the armed forces. ”

But if in Donetsk and in Lugansk Poroshenko’s speech was rather indifferent, then the statement of their commander-in-chief seemed to be seriously alarmed by the top of the Armed Forces of Ukraine.

In any case, the next day, the head of the defense department of Ukraine Stepan Poltorak announced that almost 80 thousand Russian military were concentrated near the “Square” borders, ready to strike Ukraine immediately.

For the “particularly blunt”, the Ukrainian military leader said bluntly that the conflict in the Donbas could escalate into a “full-scale aggression of the Kremlin.”

That is, the Minister of Defense has publicly stated that the intensification of hostilities against the people's republics in connection with the change of the ATO format or for another reason will inevitably cause retaliatory actions on the part of Russia.

Moreover, judging by the overall tone of Poltorak’s speech, he does not value the possibility of the Ukrainian Armed Forces to resist the Russian operation to enforce peace. In other words, Poltorak’s speech was kind of addressed to the “Supreme Commander”, and it sounded like this: “Petya, don't!”

The cause of Poltorak’s alarm is obvious: he is better than anyone else, realizing that the Ukrainian Armed Forces are not able to fight the Russian army, but the possibility of their victory over the forces of the people's republics is a big question.

Recall that the other day the Ministry of State Security of the Republic of Lithuania on its official website published the report of the American experts, who evaluated the level of combat effectiveness of the Armed Forces of Ukraine. The Americans familiarized the commanders of the Ukrainian formations with the results of this study (this is how the document actually went to Luhansk Chekists).

According to the conclusions of the Americans, “there is a low level of military discipline, general and specialized training, as well as motivation for military service, including in the ATO zone ".

According to the observations of US experts, at the level of "soldier-sergeant" there is a failure to follow orders and orders of commanders, alcohol abuse, drug use. At the level of junior officers, there is a discrepancy to the positions held due to lack of training. Officers of the level “battalion commander, regiment” are not able to fully carry out the tasks of command, including due to the high degree of corruption.

General conclusion: “... at the first stage of the armed conflict, Russian means of destruction will destroy more than 70% of the personnel of the Armed Forces, as well as all combat and military transport aviation».

It is noteworthy that, based on the data of this report, Poltorak asked the secretary of the National Security Council of Turchinov to persuade the United States and NATO to provide the Ukrainian Armed Forces with additional material assistance "to eliminate the identified deficiencies." Also, the United States and the European Union must pay for the missions of “senior commanders for internships at the central headquarters of the NATO forces in Europe.

Leaving aside the farmer practicality of Poltorak and the intention of the Supreme Command of the Armed Forces of Ukraine to immediately proceed to personal "European integration", we note that the report data is quite objective.

On a low level of combat readiness of the Ukrainian formations, information comes from numerous sources.

Thus, the official representative of the People’s Militia of the LPR, Andrei Marochko, once again stated that the intelligence services of the Republic "continue to receive information about the low level of the moral and psychological state of the militants of the armed forces of Ukraine." “Despite the rotational events held a week ago, cases of alcohol consumption and, as a result, gross violations of military discipline, offenses and suicides, are recorded in the 53 subunit of the separate mechanized brigade,” the lieutenant colonel noted.

It is noteworthy that the measures that the commanders of units and subunits are trying to use to improve discipline, often have an even more devastating effect on it than the misdeeds themselves.

For example, in the Ukrainian media and social networks, the state of emergency was actively discussed, which occurred in one of the connections of the Supreme Court of Ukraine. In the 54 Brigade, two officers were subjected to savage violence "for drunkenness." In the eyes of all the personnel, including their subordinates, the major and the captain were tied with scotch tapes to the “pillars” and left in this form for some time, giving people around them the opportunity to mock up the unfortunate people and photograph this process on smartphones.

Similar methods in armed formations have been practiced since the spring of 2014, that is, from the beginning of the punitive operation of the fascist junta against the population of Donbass.

The problem of drunkenness and drug addiction assumed a mass character in the revolutionary army. Victims of drunken clashes, surrogate alcohol and injuries associated with the abuse of strong drinks, in the hundreds, if not thousands. There are many reasons for this.

First of all, it should be noted that a significant part of the militants, both in “regular” formations and in voluntary karbats, are declassed elements, criminals and homeless people, for whom alcoholism is an integral part of “anamnesis”.

In addition, the very fact of participation in the fratricidal war is quite conducive to drinking, causing an urgent need to drown the pangs of conscience in alcohol.

Historical experience suggests that drinking has always been one of the main problems of the formations involved in punitive operations.

Be that as it may, the struggle against drunkenness in the troops of the Kiev junta took on forms almost as terrible and ugly as the causes generating it.

Although almost two-thirds of the punishers “thump” and “sit on the needle,” not everyone got under the revolutionary “disciplinary measures”, and not even the drinkers themselves.

“Initiation” into “avatars” is the so-called translation of some soldiers suffering from alcoholism into representatives of the “caste” of the outcasts in the Ukrainian armed forces.

Initially, the “avatars” were simply poured over with green paint, then they began to put them in cells or put them into earthen “zindans”. Sometimes bullying and humiliation were even more radical.

The avatars that have passed through such a “dedication” occupy the lowest position in the “food chain” of the Ukrainian formations, similar to the status of “left out” in places of detention. They are forced to do the dirtiest and hardest work; they can be beaten and humiliated by any “full-fledged” colleague.

The described case of “initiation” into the “avatars” of officers is unusual, since previously privates or sergeants were usually subjected to executions. The episodes of the massacre of officers of such a high rank became known for the first time. We also note that this incident, moreover, which did not take place in some Aydar’s Makhnov’s, but in a completely regular connection of the Armed Forces of Ukraine, speaks of the destruction of the military hierarchy, without which the army turns into a gang, into a gathering of armed criminals.

Note that the problems of violation of military discipline, including those associated with drunkenness, are present to one degree or another in all armies of the world without exception. However, they are solved, as a rule, by quite adequate measures, not related to the bullying and humiliation of the violators. These mechanisms work perfectly and efficiently, and there are no difficulties for their application in the APU.

The fact that Bandera prefer to maintain discipline with such creative methods suggests that they are not so much interested in the result as in the process itself.

It is no secret that many punishers, having tasted the taste of human blood, are so addicted to violence that they no longer imagine their existence without it. And when, due to the lack of full-scale hostilities, and because of the increased fighting efficiency of the Donbass defenders, the punitive handlers do not have “separators” on which to tear themselves away, they assign their “brothers” to the role of victims.

To this we can add that the APU is a broken army, with an undermined morale, fearing its opponent, not trusting its command and political leadership of the country.

Kiev propaganda can talk as much as possible about the victorious Ukrainian army, which stopped the “Russian hordes” and defended Europe, but the troops know perfectly well how things really were. And they categorically do not want to feel again the full rage of the Donbass defenders.

Over the last couple of years of sluggish war in the Donbas, a significant part of the armed forces of the Armed Forces of Ukraine went through various courses and trainings organized by NATO instructors. Large sums spent on the purchase of new weapons, the reorganization of the army, the creation of effective supply chains.

However, all this, judging by the report of the American experts, did not greatly strengthen the Ukrainian Armed Forces, and did not strengthen them, as Poltorak’s appeal indicates, faith in victory.

Ctrl Enter
Noticed oshЫbku Highlight text and press. Ctrl + Enter
We are
Situational analysis of the death of the MH17 flight (Malaysian Boeing 777), made on the basis of engineering analysis from 15.08.2014Reports from the militia of New Russia for 27-28 September 2014 of the year
Military Reviewin Yandex News
Military Reviewin Google News
37 comments
Information
Dear reader, to leave comments on the publication, you must sign in.