The situation in Syria. "Bearded boys" perked up a terrorist spirit?

April 10 2018
17
39 buses with militants "Jaish al-Islam" and their family members left the city of Eastern Guta Duma. The population of Aleppo came to a demonstration in support of the CAA and the government of Bashar al-Assad. Reports about it FAN with reference to Syrian sources. 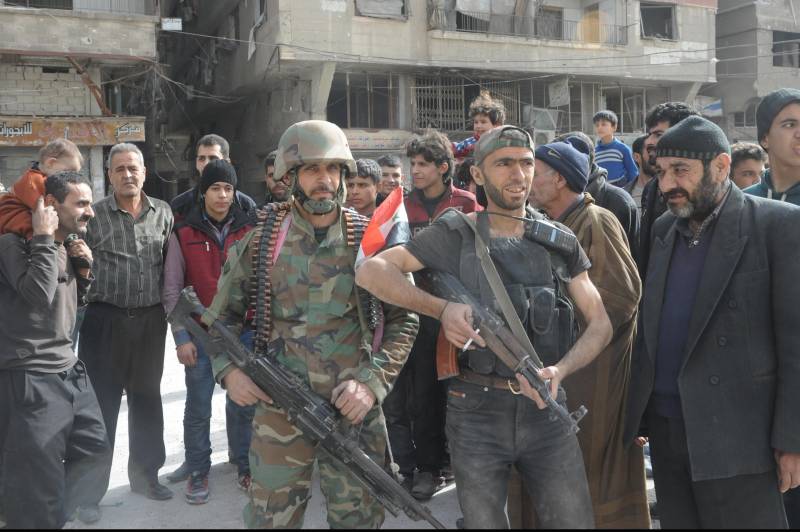 During the day, in accordance with the agreement, militants of the opposition group Jaish al-Islam released the prisoners and began to leave the Duma. By the end of the day, 39 buses with radicals and their families left the city. Former militant prisoners were evacuated to the territories of the province of Damascus controlled by the Syrian Arab Army (CAA).

The Syrian army fired at the points of deployment of radical opposition groups in the area of ​​the settlement of Khuvain (Aleppo Province). Also, clashes between the CAA and the militants were noted near the settlements of Zamar and Jazraya in the south of the region. Throughout the day, a rally was held in the provincial capital in support of the CAA and the government of Bashar al-Assad.

The T-4 airbase, located in the east of the province of Homs, was subjected to a missile strike. According to the Ministry of Defense of the Russian Federation, two Israeli Air Force aircraft attacked the positions of the SAA with eight guided missiles. The Syrian army’s air defense systems shot down five, but three missiles still reached the target. As a result of the incident no one was hurt. One of the military sources said that some time after the missile attack of the location of the SAR government forces, the terrorists of the “Islamic State” attacked (* IG, the group was banned in the Russian Federation).

In the south of Idlib, the operation of the Russian Aerospace Forces and the Syrian Arab Army (CAA) against Dzhebhat al-Nusra (prohibited in the Russian Federation) continued. Russian pilots attacked the positions of terrorists in the vicinity of the settlements of Al-Nakir, Al-Hibat and Horsh Abdin. Under cover of military aircraft, government troops attacked the points of deployment of radicals near the settlement of At-Taman. In the suburb of the administrative center of the region, an explosion thundered: the explosive device, which was put in the car, detonated. As a result, two civilians were killed, several others were seriously injured.

The Russian Aerospace Forces and the SAA continued to strike at Al-Nusra deployment points in the north of the Hama province. CAA under the guise of Russian aviation conducted artillery shelling of terrorist positions in the vicinity of Al-Latamina and Kafr Zeta.

Ctrl Enter
Noticed oshЫbku Highlight text and press. Ctrl + Enter
We are
A coalition led by the United States is preparing a hybrid strike on Syria. "Green berets" seen in the "el-Babskiy bridgehead"Full Syria summary for 24.03.2017 of the year
Military Reviewin Yandex News
Military Reviewin Google News
17 comments
Information
Dear reader, to leave comments on the publication, you must sign in.