April 6 2018
29
Operation Consent, which 75 carried out Soviet and British troops years ago, does not receive much attention from historians. Nevertheless, to call it “secret”, as in the era of the Cold War, the Western mass media hastened, there is no reason. 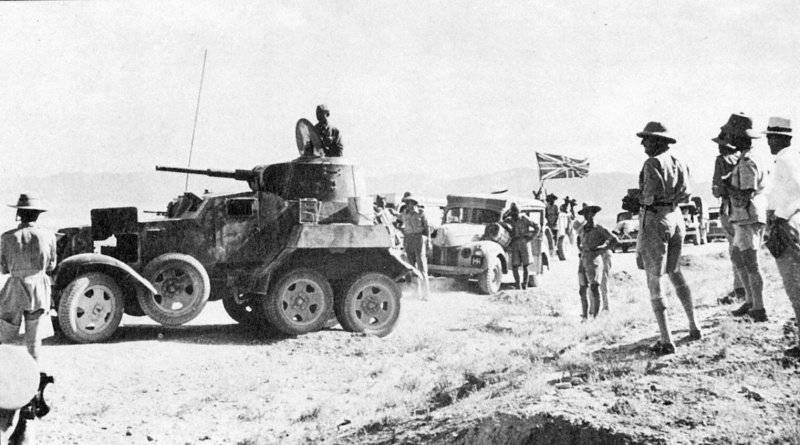 It is quite clear in his correspondence, first published only in 1957, that both Stalin and Churchill mention the deployment of the Red Army troops in Iran. In the first official Soviet stories The Great Patriotic War also said about this in passing. Otherwise, it would be quite difficult to explain why Tehran was chosen as the place for the first Big Three conference.

This highly dubious victory is uninteresting to military specialists, and even diplomats who, with surprising promptness, agreed on the very idea of ​​a “double invasion”, have nothing to be proud of. Moreover, the long-term consequences of the operation “Concord” turned out to be too ambiguous not only for Iran, but also for the USSR and Great Britain.

After a month and a half since the beginning of the war, having suffered a series of heavy defeats, the Red Army achieved relative stabilization on the Soviet-German front. After a stubborn and bloody Smolensk battle, the Germans were preparing for an offensive in Ukraine and near Leningrad, which gave the Soviet command an opportunity to strengthen the defenses in the Moscow sector. The Soviet headquarters continued to pull up reserves from Siberia and the Far East, but it was out of the question to transfer combat-ready units from Azerbaijan and Central Asia.

The real threat of joining not only Turkey, but also Iran to the German-Italian bloc remained. The Shah state, which was customarily considered almost a British colony, suddenly turned into a potential ally of Hitler Germany in just a couple of years. At least, the pro-German sentiments surrounded by Rezah Shah Pahlavi, who had been reigning for a decade and a half, did not embarrass anyone at all. How this Nazi diplomats and intelligence officers managed to achieve this is still a mystery even for specialists. But in fact, the Soviet Union and Britain, which had just become allies in the anti-Hitler coalition, were quite unexpectedly faced with the need to do something with Persia.

The allies in Persia, officially renamed Iran only in 1935, had something to protect. Thus, the British, just two years before, had completed the construction of the Trans-Iranian railway, which provided them with not only the possibility of free transportation of Iranian oil, but also a direct connection of Interfluvelands with Indian possessions. As early as May 1941, a rebellion in Iraq was suppressed, which almost threatened transit and military supplies through the Persian Gulf. In turn, the USSR was interested in ensuring reliable protection of the Baku fields from the south, and at the same time continuing to contain neutral Turkey.

But the main reason for the efficiency of the allies was still Lend-Lease. Washington immediately with the outbreak of hostilities in Russia made it clear that it was not against supplying it, like England, with weapons, ammunition and military materials. Among the possible supply routes, Persian was not even considered at first, but the Allied specialists were able to evaluate its convenience and cheapness very quickly.

It is characteristic that in August 41 didn’t declare any war to Shah Reza. For a start, he was simply offered "to take on its territory" allied forces, after having expelled German agents from the country. But the aging Shah proudly refused, although the proposal was clearly one of those that were easier to accept.

The situation worsened, Moscow and London did not rule out the possibility of a pro-German coup in Tehran, although they had no idea that it was in August 1941 that Admiral Canaris, the head of the Abwehr, secretly arrived there. 25 August Moscow sent Tehran the last note with reference to paragraphs 5 and 6 of the current Treaty with Iran from 1921, which provided for the Soviet troops to enter in case of a threat to the southern borders of Soviet Russia.

And on the same day the invasion began. Soviet troops, like the Transcaucasian Front under the command of General Kozlov, who moved from the territory of Azerbaijan, and General Trofimenko’s Separate Central Asian 53 Army, which operated from Turkmenistan, showed almost no resistance. And this is despite the formidable Shah memorandum and a whole series of conflicting orders to the troops. The case was limited to several clashes with the border guards and the landing on the southern coast of the Caspian Sea, where they managed to capture the entire Iranian Caspian fleet: the Shah's yacht, several boats and boats.

The air supremacy of the Red Army Air Force was complete, although it was not actually required. However, the chairman of the Iranian parliament said that the "red falcons" allegedly bombed Tabriz, Mashhad, Ardabil, Rasht, Bender-Pahlavi and other cities. There were eyewitnesses who spoke about the bombing of the summer camps of the military academy in the suburbs of Tehran Larak. However, from declassified not so long ago Soviet sources, it became clear that all "combat" work aviation came down to conducting reconnaissance and scattering leaflets. At that moment, when almost every cartridge was counted, no one would hide the necessary consumption of ammunition.

The entry of British troops into Iranian territory passed with far greater complications. With the seizure of the port of Bender-Shahpur, already in our time in a revolutionary manner renamed Bender-Khomeini, a real battle broke out. The German gunboat was sunk, after the bombing, the oil terminals were burning for several days. The British had to bomb and resist Iranian units, airfields and even some localities.

But it took literally a few days to advance to Tehran both the Russians and the British. Despite the fact that the Iranian units opposing the Allies capitulated on both fronts, the Shah tried to "defend" the capital. However, the invaders preferred to a bloody assault ... a change of the Shah. He lost support even from the inner circle of Shah Reza on the throne was replaced by his son Mohammed Reza-Pahlavi, sociable, less arrogant and already popular among the people. His candidacy seemed to suit everyone immediately. The abdication of the old Shah and the accession of the young Shah happened on September 12, and already on September 16, in order to maintain order, Tehran still included parts of the allies.

After an almost “bloodless” invasion and the accession of the new sovereign, the situation in Persia stabilized very quickly, especially as products and goods from the USA and other countries began to flow into the country, as if in a burden to supplying lend-lease. Of course, almost 100-percent cleansing of the country’s territory from Nazi agents also had a positive effect, although public opinion in Iran, if you could talk about it at all in those years, almost immediately turned towards the Allies.

Meanwhile, the situation on the Soviet-German front again became threatening, which forced the Soviet command to withdraw all the air units from Iran, and then a significant part of the 44 and 47 armies of the Transcaucasian Front. Only 53-th separate Central Asian army was detained there for several years, passing through it thousands of recruits from Central Asia, from Altai and from Transbaikalia.

It is interesting that, despite the “peaceful” nature of the invasion, and as if forgetting about Stalin’s established warm relations with the new Shah, during the war years, the Politburo addressed the issue of “developing success in the Iranian direction”. Thus, according to some memoirists, with the light hand of Beria and Mikoyan in the Soviet occupation zone, they even tried to create the Mehabad Kurdish Republic. Moreover, it is also to “single out” South Azerbaijan as an autonomy. However, Stalin did not dare to so cheekily tease Britain and Churchill personally. The leader of nations did not forget that the Iranian corridor for lend-lease supplies remained hardly the main supply artery of the entire southern front of the Red Army.

Another confirmation that there was no talk of any occupation is the fact that the Soviet troops, that is, the very same 53-I separate army, stood in Iran only until May of the 1946 year. And that is mainly out of fear of a possible strike from Turkey.

Ctrl Enter
Noticed oshЫbku Highlight text and press. Ctrl + Enter
We are
Diplomats of the People's Commissariat of Defense: on the eve and during the warSecret Voyage
Military Reviewin Yandex News
Military Reviewin Google News
29 comments
Information
Dear reader, to leave comments on the publication, you must sign in.