The tragedy of Soviet prisoners of war 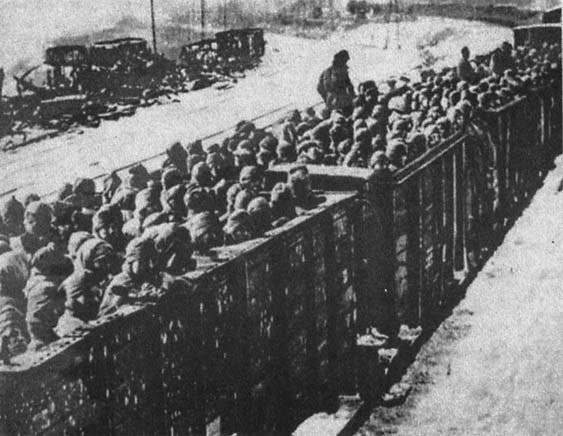 One of the worst pages stories World War II - this is the fate of Soviet prisoners. In this war of extermination, the words "captivity" and "death" became synonymous. Based on the goals of the war, the German leadership would prefer not to take prisoners at all. They explained to the officers and soldiers that the prisoners are “subhumans”, the eradication of which “serves progress,” besides, there will be no need to feed extra mouths. There are many indications that the soldiers were ordered to shoot all Soviet soldiers, with rare exceptions, not to allow "human treatment of prisoners." The soldiers carried out these instructions with German thoroughness.

Many unscrupulous researchers accuse the Soviet army of low combat efficiency, comparing the losses of the parties in the war. But they miss or do not specifically pay attention to the fact of the magnitude of the killings of prisoners of war directly on the battlefield and later, during the passage of people to concentration camps and their detention there. They forget about the tragedy of civilians going from east to west, who went to their recruiting stations, to the place of assembly of units. The mobilized did not want to be late, did not know anything about the situation at the front, many did not believe that the Germans could penetrate so deep into Soviet territory. Thousands and thousands were destroyed by the German Air Force, tank wedges, were captured and were shot without even getting in their hands weapons.

According to Christian Streit, a professor at the University of Heidelberg, the number of Soviet prisoners of war destroyed by Wehrmacht compounds immediately after the capture was measured by “five, if not a six-digit number.” Almost immediately, the Germans killed the political leaders ("commissars"), Jews, and the wounded. The wounded Red Army men were killed right on the battlefield or in hospitals that did not have time to evacuate.

The terrible fate of the female military. Wehrmacht soldiers received instructions, in which they were ordered to destroy not only “Russian commissars”, but also Soviet women soldiers. Women of the Red Army were outlawed. De facto, by their harmfulness, they were equated with the “incarnation of evil” —commissioners and Jews. For Soviet-born girls and women wearing nursing uniforms, nurses, doctors, signalers, etc., it was much worse than death to be captured by the Nazis. The writer Svetlana Alekseevich gathered in her work “The War Doesn’t Have a Female Face” testimonies of women who have passed through the war. In her book, a lot of evidence about this terrible truth of World War II. “The Germans didn’t take prisoners of military women ... we always kept the last cartridge for ourselves - to die, but not to surrender,” one of the witnesses of the war told Alekseevich. - We got a nurse taken prisoner. A day later, when we beat off that village, we found it: eyes were gouged out, the chest was cut off ... She was put on a stake ... Frost, and she is white and white, and her hair is all gray. She was nineteen years old. Very beautiful…".

It was only in March 1944, when it became clear to many in the Wehrmacht general that the war was lost and war crimes would have to be answered, an order was issued by the Supreme Command of the Armed Forces (RCC), according to which the captured “Russian women prisoners of war” should be sent after checking by the Security Service in a concentration camp. Up to this point, women simply destroyed.

Methods of destruction commissioners planned in advance. If political workers were captured on the battlefield, they were ordered to be liquidated “no later than in the transit camps”, and if in the rear they were transferred to Einsatz commands. Those Red Army men who were “lucky” and were not killed on the battlefield had to go through more than one circle of hell. The Nazis did not provide assistance to the wounded and sick soldiers, the prisoners were taken by prisoners to the west. On the day they could be forced to go 25-40 km. Meals gave very little - 100 grams of bread per day, and even then not always, not everyone had enough of it. They shot at the slightest disobedience, killed those who could not walk anymore. During the convoy, the Germans did not allow local residents to feed prisoners, beat people, Soviet soldiers who tried to take bread, shot them. The roads where the columns of prisoners passed were simply littered with their corpses. These “death marches” fulfilled the main goal - to destroy as many “Slavic subhumans” as possible. During successful campaigns in the West, the Germans transported numerous French and British prisoners exclusively by rail and road.

Everything was thought out very well. In a rather short period of time, healthy people turned into half-corpses. After capturing the prisoners for some time kept in a temporary camp, where selective executions, lack of medical care, normal nutrition, crowding, illness, weakened people, broke their will to resist. Exhausted, broken people were sent further down the stage. There were many ways to "thin out" the ranks of prisoners. Before the new stage, prisoners could be forced to make a “march” several times at any time of the year and weather. Those who fell and could not stand the “exercise” were shot. The rest were driven further. Often arranged mass executions. So, in the middle of October 1941, a massacre occurred on the Yartsevo-Smolensk section of the road. The guards without a reason began to shoot the prisoners, the others were driven into the broken tanks standing by the road, which were poured with fuel and set on fire. Those who tried to jump out were immediately shot. Under Novgorod-Seversky, during the convoy of a convoy of prisoners of Red Army, the Nazis separated about 1 thousand people sick and weakened, placed in a barn and burned alive.

People were killed almost constantly. They killed the sick, weakened, wounded, recalcitrant, to reduce the number, just for fun. Einsatzgruppen and sonderkommando SD in the transit camps conducted the so-called. "The selection of prisoners of war." The essence of it was simple - all the recalcitrant and suspicious were destroyed (subjected to "execution"). The selection principles for the “executions” were different, often different from the preferences of the particular commander of the Einsatkommando. Some made the selection for the elimination of "racial characteristics." Others sought out Jews and Jews. The third destroyed representatives of intelligentsia, commanders. For a long time they killed all Muslims, circumcision did not speak and in their favor. Officers were shot, because the overwhelming majority refused to cooperate. There were so many things to be destroyed that the guarding of the camps and the Einsatzgroup did not cope with the “work”. Soldiers from nearby formations were attracted to "executions." And they gladly responded to such proposals, there was no shortage of volunteers. The military was strongly encouraged for executions and murders of Soviet citizens. They were given holidays, raised, even allowed to celebrate with military awards.

Part of the prisoners was taken to the Third Reich. In stationary camps, new methods of mass destruction of people were tested on them. The first few hundred prisoners arrived at the Auschwitz concentration camp in July 1941. These were the tankers, they were the first who were destroyed in the German death camps. Then came the new party. In the fall of 1941, Soviet soldiers captured the technology of killing with the help of Cyclone-B gas for the first time. There is no exact data on how many POWs were liquidated in the Reich. But the scale is terrifying.

The arbitrary killings of Soviet prisoners were legalized. The only one who was indignant against these actions was Admiral Wilhelm Canaris, head of the intelligence and counterintelligence department. At the end of September 1941, the chief of staff of the Supreme Command of the German armed forces, Wilhelm Keitel, received a document where the admiral expressed fundamental disagreement with the “Rules” regarding prisoners of war. Canaris believed that the order was drawn up in general terms and leads to "arbitrary lawlessness and murder." In addition, this situation was not only contrary to the law, but also common sense, led to the decomposition of the armed forces. Canaris’s statement was ignored. Field Marshal Keitel put the following statement on him: “Reflections correspond to the soldiers' notions about the knightly war! Here we are talking about the destruction of the world. Therefore, I approve of these events and support them. ”

Hunger was one of the most effective methods that allowed to destroy people by the masses. Only in the fall in the camps for prisoners of war began to build barracks, before that, most were kept in the open. At the same time 19 of September 1941 of the year at a meeting with the head of the army’s supply and equipment, it was established that 150 prisoners could be accommodated in barracks designed for 840 people.

In the autumn of 1941, the Nazis began to transport masses of prisoners by rail. But from this the death rate only increased. Mortality in shipments reached 50-100%! Such high efficiency in the destruction of "subhumans" was achieved by the basic principle of transportation: in the summer, people were transported in tightly closed wagons; in winter - on open platforms. The cars were filled to the maximum, they were not supplied with water. A train from the 30 cars arrived at the Most station in November when not a single living person discovered them. About 1500 corpses were unloaded from the train. All the dead were in the same underwear.

In February, 1942 of the year, at a meeting in the military economy management of OKW, the director of the labor administration department reported the following figures: from 3,9 million Russians who were at the disposal of the Germans, only 1,1 million remained. Thus, only in November 1941 - January 1942 yy approximately 500 thousand died. This is not only the Red Army, but also other Soviet people who were driven into prison camps. In addition, we must take into account the fact that hundreds of thousands were killed immediately after the battle, were killed during the escort to the camps.