April 7 2018
108
The first supreme commander-in-chief of the Russian army of the First World War, Grand Duke Nikolai Nikolayevich (junior) is a very colorful and extraordinary person. The grandson of Emperor Nicholas I and the son of Grand Duke Nikolai Nikolayevich (senior), Commander-in-Chief of the Russian army in the Russian-Turkish war 1877-78, he was a born warrior - as they say, to the bone. The knowledge gained at the General Staff Academy (graduated with the Silver Medal), large-scale experience of military service, and military distinctions became major milestones in the formation of the future commander and administrator.


We do not aim to review the whole life of the Grand Duke (this is the mass of works written in this article — it suffices to recall the fundamental work of quartermaster-general Stavka Yu. N. Danilov), his political and military career (including issues related to the subsequent appointment of the commander-in-chief of the Caucasian Front and the failed new High Command in March (1917). Let us dwell only on some aspects of the latter, primarily concerning the activities of Nikolai Nikolayevich as the first commander-in-chief of the army in the first, most crucial stage of the great war. 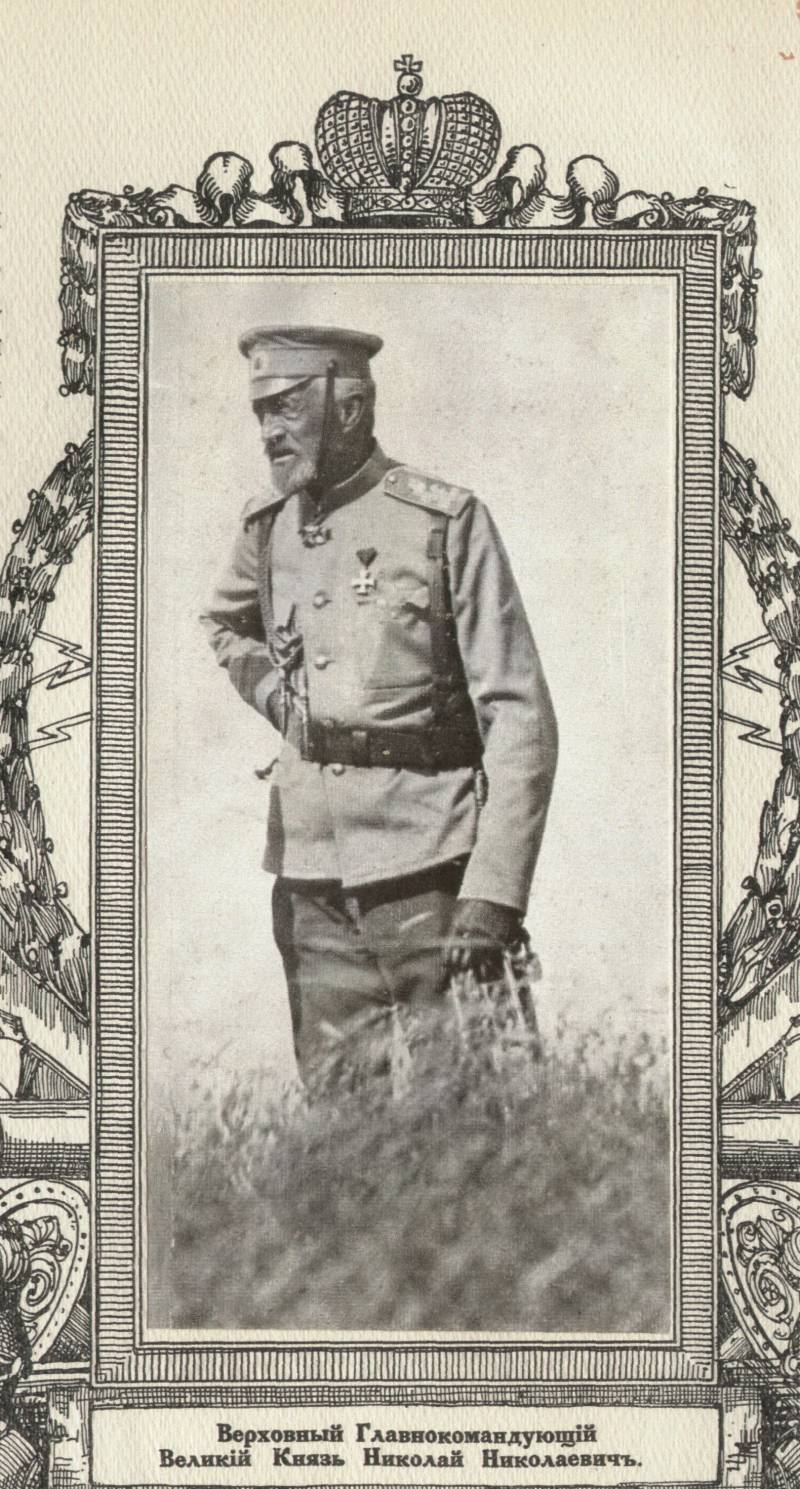 1. The great war in the images and paintings. Issue 1.

Nature endowed the Grand Duke with a clear mind, clarity of thought, a strong will and, what is most remarkable, an infinite faith in the Russian people. And he was constantly improving his knowledge - moving along the path of service to the Motherland.

Deserving military distinctions in the fire of the Russian-Turkish war, the Grand Duke successively passes through all the officers' officer posts in the Hussar Life Guards regiment, right up to the post of commander of the latter. And very soon, from the regiment headed by him, other parts begin to take the example: with regard to the methods and techniques of training, both combat and tactical.

The next stage of the Grand Duke’s career was the command (from December 1890) of the 2 Guards Cavalry Division. Soon the compound also became a role model - now for the entire Russian cavalry.

In 1895, the Grand Duke Nikolai Nikolayevich is appointed to the post of General-Inspector of the Cavalry. This position allows the Grand Duke to unleash the organizational talent in full force and apply his knowledge and experience throughout the empire.

The Inspector-General does not disregard a single issue relating to both the education and training of cavalry. He began his activity with reforming the horse repair system, and under his leadership a corresponding repair provision was issued. Then issues of armament and combat training are resolved - and not only the skills of possession of cold weapons, but also the ability to conduct accurate fire from rifles and machine guns. Yet the main attention of the Grand Duke is directed to the tactical training of cavalry - this issue has become a priority. Without exaggeration, it can be argued that the excellent condition of the Russian imperial cavalry, in which she left for world war, is the merit of the Grand Duke. How great is his contribution to the tactical training of the Russian cavalry - as demonstrated by its actions during the First World War. As one of the officers recalled, largely due to the pre-war preparation “In 1 World War I know examples of the attack of our cavalry on infantry: the Akhtyrka hussars in the battle of Dembio, with the active support of the fire of the Turkestan Mounted Battery; the sacrificial attack of the Mitau hussars of Neradov; The Turkmen cavalry regiment during the Brusilov offensive; The 3 Squadron of the Belarusian Regiment of Hussars, for the revenue of the 14 th mounted battery. The artistic pen of the late gene. Krasnova described Zaamurtsev attack. Before my eyes, Pavlograd Hussars and the 2-th Don Cossack Regiment were sent to attack in the battle of Goryungof, but the attack choked, as the German infantry took refuge in the forest, from which the Germans did not allow their Xnumx horse batteries to stick out their nose. If the Grand Duke had been present during these attacks, his heart would have rejoiced. In these brilliant actions of the cavalry, he would have seen the results of that education and combat training, on which, being a Gene, had worked hard. Insp. Cavalry "(Levitsky A. Ordinary Service at the Grand Duke Nikolai Nikolaevich (Personal Memories) // Military Story. 1956. No. 27. C. 14-15.).

Each step of the career of the Grand Duke made him more and more popular among the troops.

Exceptional merit in the position of Inspector-General of Cavalry and in the troubled months of 1905 put the Grand Duke to the post of Commander-in-Chief of the Guards and the St. Petersburg Military District.

It was in this post that the Grand Duke worked right up to the start of the world war. The education and training of troops, the renewal of the commanding staff of the Guard troops, the improvement of the living conditions of the units, the concern for the expansion of military knowledge among the officers of the Moscow district - the district commander tried to take care of all the issues.

The natural qualities, upbringing, education, regular work and thoughtful study of military affairs created the Grand Duke in the military environment a well-deserved image of the first military leader of the empire.

And when, by the will of the Sovereign Emperor, the Grand Duke was called to the post of Supreme Commander, this was received with deep satisfaction both in the palaces and in the peasant huts. 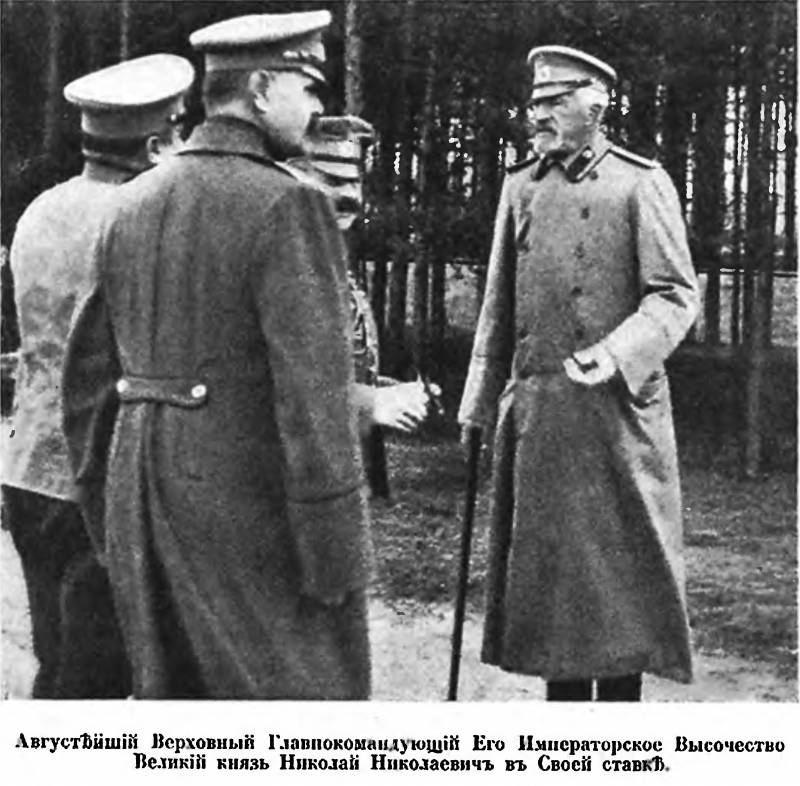 The mobilization plan left the post of Supreme Commander vacant until the declaration of war. This circumstance did not allow the Grand Duke Nikolai Nikolayevich to participate in drawing up a plan of war, and also to select in advance the officials of the headquarters of the future Headquarters - which could not but affect the strategic initiative and operational work of the Grand Duke in the first days of the war. 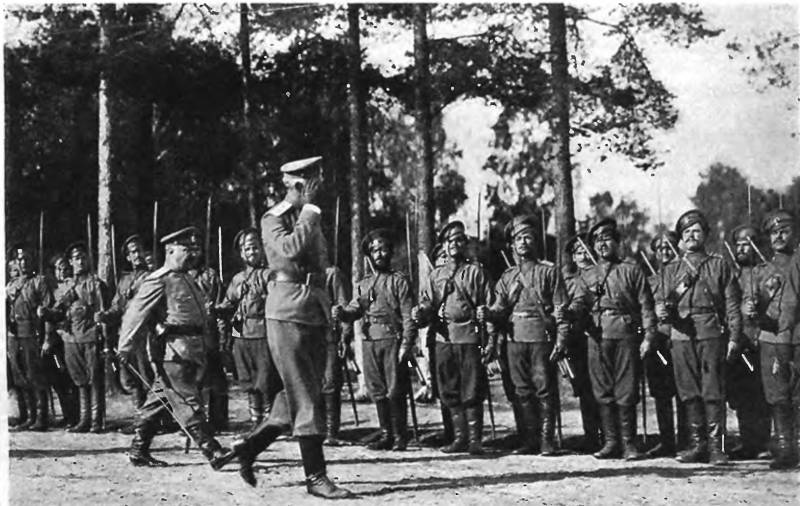 The will of the Grand Duke was manifested in the adoption of his first and very important strategic decision. Already in the evening of August 13, 1914, in the Headquarters, anxious information was received about the state of affairs in A. Samsonov's 2 Army. Three days later, on August 16, a catastrophe in the 2 Army became an indisputable fact for BHQ. The failure of the 2 Army - the death of its central corps and the rapid rollback of the flank - actually destroyed the front on the Narev River.

The German 8 Army opened up prospects for threatening the backs of the Russian 4 and 5 armies - the right-flank armies of the South-Western Front, who were already failing in battles with a stronger Austrian grouping. Thus, the 4 Army fighting the Lublin was threatened by the Austrian 1 Army, and the 5 Army broke up into groups of corps and retreated under the onslaught of the Austrian 4 Army. 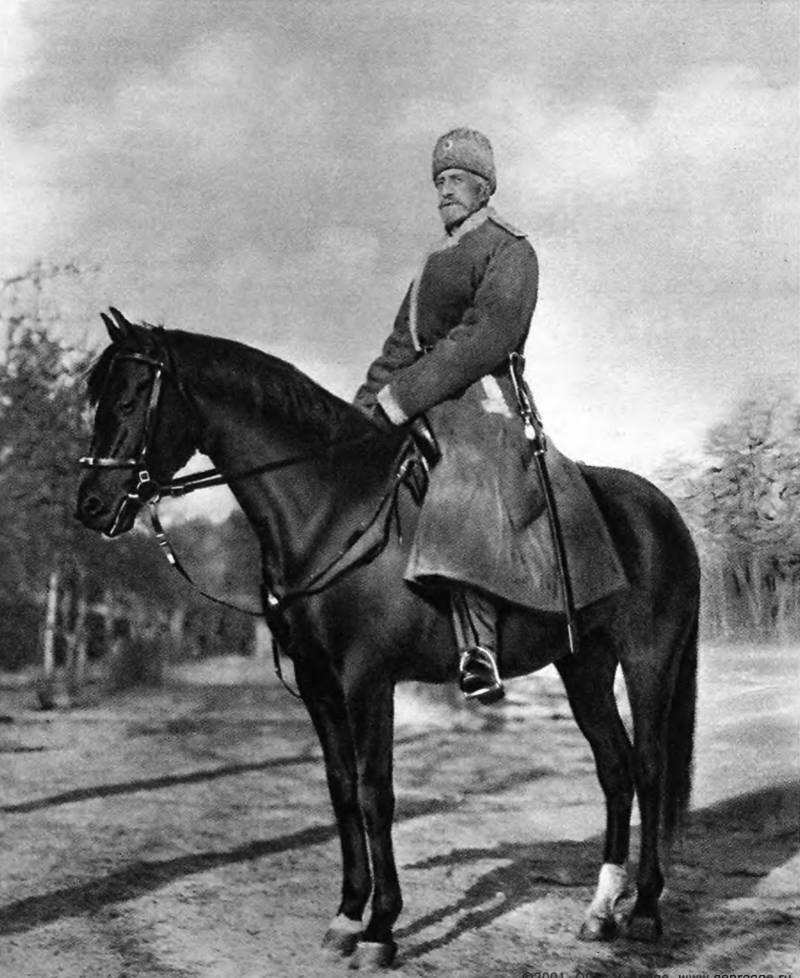 Thus, the strategic situation that had developed by the evening of 16 on August, for all the armies of the North-West and for the right-flank armies of the South-Western front was extremely unfavorable - moreover, threatening the collapse of the entire Russian front.

And the Grand Duke made a remarkable decision - which later led to the victory over the entire Austro-Hungarian army (after all, 4 / 5 had focused it on the Russian front). 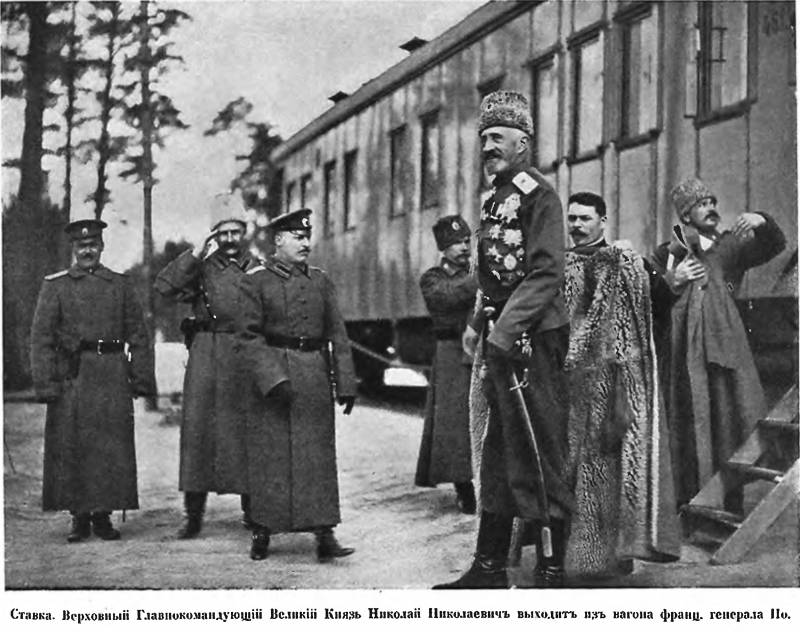 What is the essence of this decision?

Before Glavkoverkhem two possibilities opened up.

The first is the withdrawal of armies to the Bug River. This led to the abandonment of the Advanced Theater - Russian Poland. Not a planned evacuation - but a quick abandonment with the loss of huge resources. One doesn’t have to prove - what harmful consequences would such a decision have for the country and the army.

The second opportunity required to continue the Battle of Galicia. It was necessary to collect all the free reserves in one mass - to deliver the main attack.

And the Grand Duke gathers all free forces on the right flank of the South-Western Front. The bid sends new corps to the 4 Army - including the best ones (the Guard and the 3 Caucasus Corps) and delivers a crushing blow to the Austrian 1 Army V. Dunkl. Also on the right flank, a fresh 9 army is being formed. This counter-maneuver by reserves has key consequences - and leads to a strategic breakthrough of the 3-s right-flank armies of the South-Western Front (4, 5, and 9). 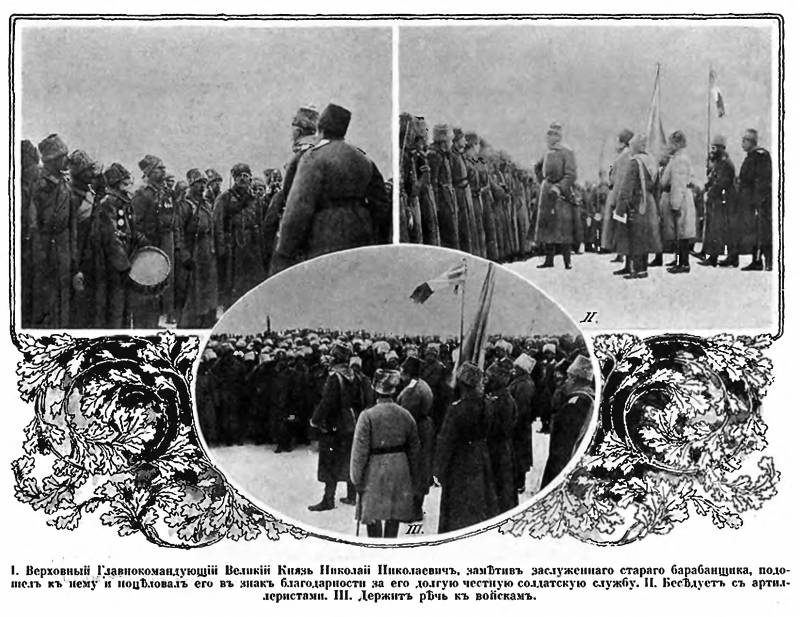 The consequences of the Galician victory proved to be very favorable. The Austro-Hungarian army was never able to fully recover from this defeat during the whole war - it needed more and more German troops, which were increasingly mixed with the Austrian forces. Formed a kind of Galician "corset". The East German Front, respectively, is demanding more and more new corps - many of which were intended to stand up against Russia's allies in the Entente. Failures in East Prussia are erased before the result of the Galician victories.

The public rejoiced - and the name of the Grand Duke was on everyone’s lips. 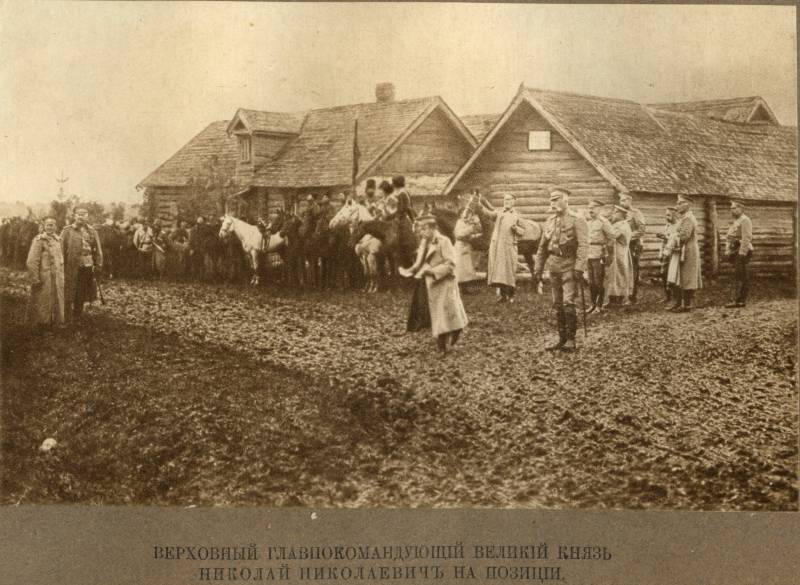 Another result of the Galician victory was that in the process of the battle the army believed in its Glavkoverha, and the latter - in the troops.

The second most important strategic decision of the Grand Duke - to strategic castling - allowed in October (we wrote about this in detail - see Strategic castling) to win on the middle Vistula - during the Warsaw-Ivangorod operation. The decisions of the Stavka made it possible in November, during the Lodz operation, to thwart the operational plans of P. Hindenburg and his chief of staff E. Ludendorff. In the latter case, there was also a reshuffle of the Russian 5 army - and it did not allow the Russian 2 army to be surrounded. Moreover, they managed to achieve the encirclement of a large bypassing group of German troops.

All three counter-maneuvers of the Grand Duke (Galician, Warsaw-Ivangorod, Lodzin), our enemies recognize the best examples of Russian military art in general and military art in particular. The allies in the person of Marshal F. Foch also consider, for example, Lodz’s counter-maneuver to be “a wonderful manifestation of the art of war”.

With active offensive actions, the Grand Duke tied the initiative of the German command on his Western front, and the actions of the Russian troops invariably diverted more and more German corps to the Eastern Front.

It is believed that World War I gave military stories 2 named after talented commanders of the first magnitude: F. Foch and P. Hindenburg. We will take the liberty to replace P. Hindenburg (whose decisions were also largely determined by the activities of E. Ludendorff) with the Grand Duke Nikolai Nikolaevich. After all, during the Battle of Galicia, the Grand Duke crushed the strategy of F. Conrad Gettsendorf, while during the autumn operations of 1914 in Poland - the strategy of the tandem of P. Hindenburg - E. Ludendorff.

And it is obvious that in many respects the basis of the loss of World War I by the German world lies in the leadership decisions of the first Commander-in-Chief of the Russian army in the field - Grand Duke Nikolai Nikolayevich the Younger. 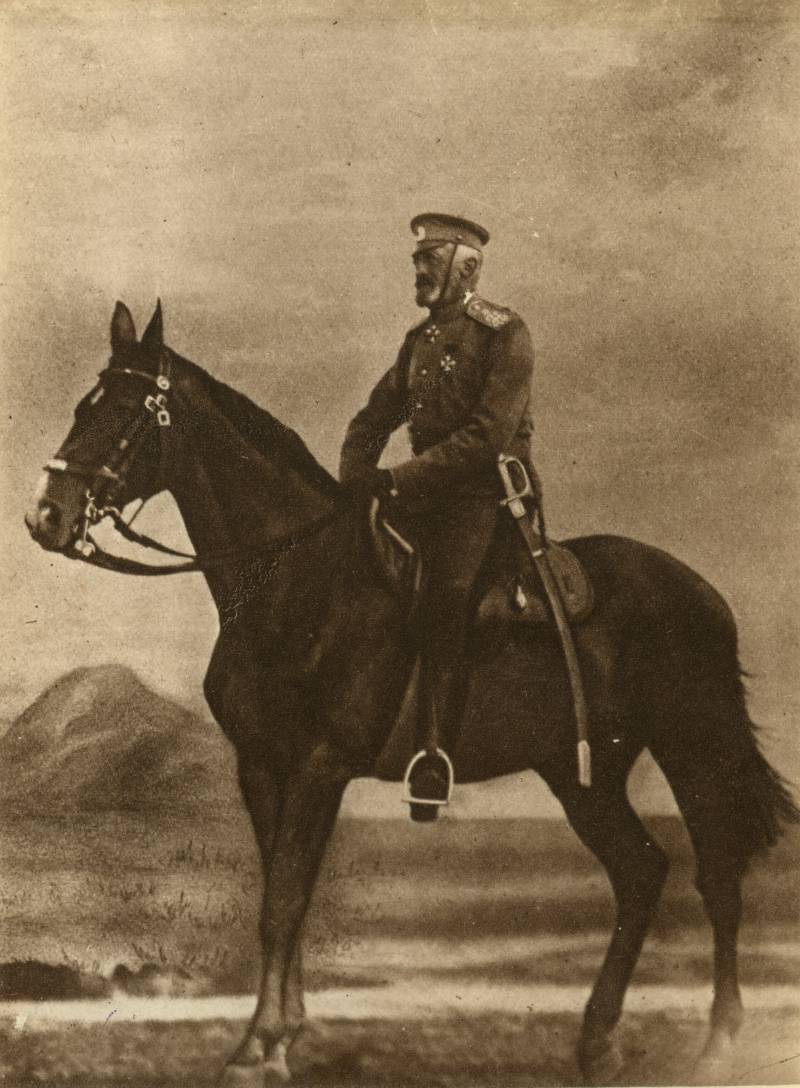 Ctrl Enter
Noticed oshЫbku Highlight text and press. Ctrl + Enter
We are
“Let down our villages and our cities”140 years of the heroic defense of Shipka
Military Reviewin Yandex News
Military Reviewin Google News
108 comments
Information
Dear reader, to leave comments on the publication, you must sign in.