Again the hunger strike, or Whose prison is better?

March 24 2018
48
The well-known ex-prisoner of the “Russian regime”, the former punitive of the “Aydar” battalion, the former idol of the Ukrainian nationalists along with MEPs Nadezhda Savchenko is again in the dungeons. But this time it is no longer Putin’s “totalitarian dungeons”, but the “European” dungeons of post-Maiden Ukraine quite well.


History repeated: Nadezhda resorted to her favorite method of protesting and correcting the figure. At a meeting of the Shevchenko district court of Kiev, where she was elected a preventive measure, she said she was starting a new hunger strike. 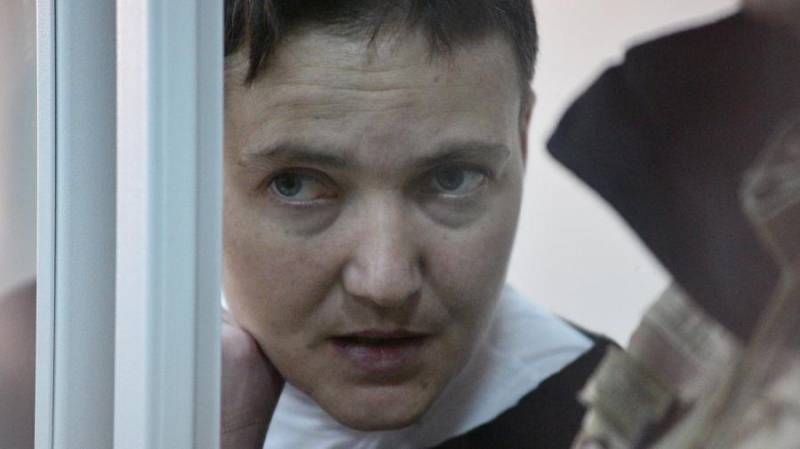 She was allowed to talk to reporters. The prisoner shared her impressions of the first night in the Ukrainian prison and complained about the conditions of detention. “What kind of European integration are we talking about?” Asked Savchenko. According to her, in the Ukrainian prison is worse than in Russia, and in every corner "human dignity is humiliated":

“In the SIZO I do not have a single zone in the cell where human dignity would not be degraded. I can not get undressed so that they do not shoot the video camera, I can not go to the toilet, so as not to remove the video camera. In principle, in some moments it is even worse than the enemy's detention center. ”
It is easy to guess that by “enemy” she still means Russia. The country where the president was pardoned. Where liberal activists stood up for her and wore gears for her when she was not starving. And where she was not filmed on the toilet. And yet - in Russia, she was not threatened with capital punishment - life imprisonment (it does not apply to women. And in Ukraine - it threatens.

The accusations made against the Ukrainian “heroine” dropped from the pedestal are serious. Perhaps the softest of them is “Disrespect for the President of Ukraine”. The rest even sound ominous: the preparation of terrorist acts in the Verkhovna Rada and the government quarter, an attempt to seize state power, incitement to destroy the leaders of the state.

The prosecutor also said that Savchenko had F-1 grenades in her bag, with which she wanted to undermine herself. Just something is not undermined. Perhaps it was the fruit - one must eat before a hunger strike, then.

More specifically, Nadezhda Savchenko is accused of contacting the previously arrested Ukrainian negotiator with the People’s Republics, Vladimir Ruban. He, in turn, is accused of transporting weapons from the DPR, ostensibly to commit terrorist acts in the government quarter. According to the investigation, the weapon he was carrying was for her, for Hope. Moreover, photos came up in which she, along with Ruban, burns some papers in the park (according to the investigation, there must be plans for a coup).

Despite such serious articles, the "terrorist" made a break: they allowed him not to be in a glass "cage", but to sit next to the defenders.

When declaring a hunger strike, the “heroine” remembered how it was in Russia and said: “It’s not scary for me, I’ve been through this”. She noted that in the Russian SIZO she spent six days of dry hunger strike and an 83 day routine.

Only one thing was silent: under normal conditions the human body would not sustain such a hunger strike. She survived due to the fact that she was provided with all the necessary medical assistance - such as not every free citizen of Russia (for example, living in a village) can receive. She was given various nutrients and did everything possible so that she did not die.

At least, from modesty Hope definitely will not die. She still considers herself a hero:

“If I remain in prison, I will show you once again what the people of Ukraine are and what a hero is”
Will the Ukrainian authorities take care of the hungry people as much as the Russian authorities did? Time will tell. Most likely, it is necessary, because her death is still not very profitable Poroshenko, fearing a military coup. Although the “bloody pastry chef” did not conceal that he was glad to arrest the one whom he personally handed over to the star of the Hero of Ukraine. He wrote on his Facebook page:

“I am grateful to the staff of the Security Service and the General Prosecutor’s Office for the lives of people saved as a result of the prevention of mass terrorist attacks and the Russian special operation exposed against Ukraine.”
Ironically, commented on the situation around Savchenko, the official representative of the Russian Foreign Ministry, Maria Zakharova, reminded the OSCE of the arrest of Verkhovna Rada deputy Nadezhda Savchenko.

However, “democratic” Europe has a new toy now. All news the tapes are “clogged” with a British spy, former GRU officer Sergei Skripal. On the basis of the case of his poisoning, widespread bullying of Russia has been launched. The noise is almost the same as then - during the hunger strike of Nadezhda Savchenko in the Russian pre-trial detention center.

Will they not forget, in the midst of these hot battles, about their former "screen star"? About the one that complains about the conditions of detention in the SIZO, “forgetting” what the conditions of the prisoners were, in which she personally participated in torture. About that, in the opinion of many, looks almost the most "decent" among this freak show.

At least, one of those who warmly sympathized with Savchenko while she sat in the “Russian torture chambers”, actress Liya Akhedzhakova, managed to speak out. This time she is much more restrained and cautious in her statements:

“I do not dare to say anything, because this is a different country, other laws and none of my business. No one in Russia has the right to react to this. I sympathize with her very much, and not with those who arrested her. ”

There are, however, those who offered her political asylum. It turned out to be ... the authorities of the Lugansk People’s Republic, on the territory of which it committed its crimes. And about. The head of the Ministry of Foreign Affairs of the LPR, Vladislav Dane, stated:

“If Savchenko threatens to lose her freedom, she can turn to the LNR for political asylum. We promise to consider this issue. ”

But surely Nadezhda, when spitting into this well, did not plan to drink from it. And she wants attention and protection from other forces - those whose generous handouts are pretty spoiled. Who created her worldwide fame and held hunger strikes in solidarity with her. There is only one problem - these forces are much more loyal to the Poroshenko regime than to the Russian authorities. So it is unlikely that now deputies of the European Parliament and other world celebrities who were starving for Hope, will repeat their gesture. And starving alone is not so pleasant. Well, let's see how long it will last this time. According to a court ruling, at least 60 will have to sit in jail for the next few days.

Ctrl Enter
Noticed oshЫbku Highlight text and press. Ctrl + Enter
We are
Yulia and Nadia are ready to lose Poroshenko?Reports from the militia of New Russia for 7 September 2014 of the year
Military Reviewin Yandex News
Military Reviewin Google News
48 comments
Information
Dear reader, to leave comments on the publication, you must sign in.