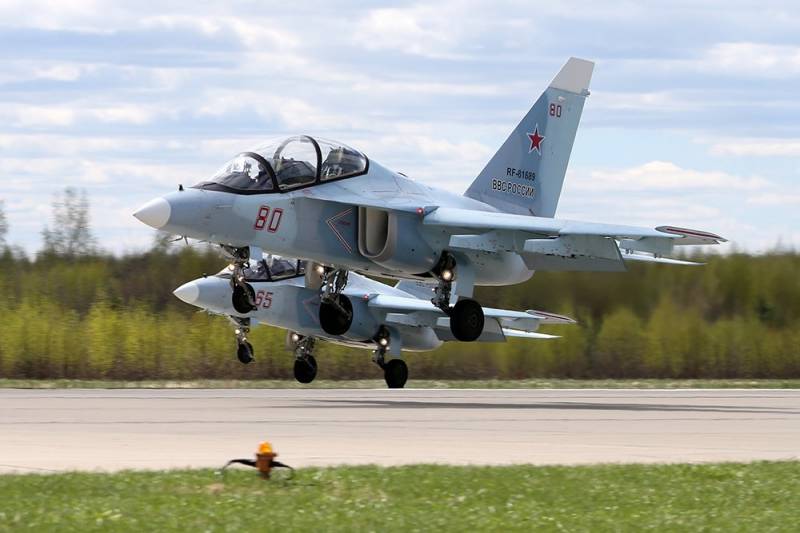 According to the information, “a series of record flights was conducted at the aerodrome of the LII. M.M. Gromova in the period from 17 to 26 in October 2016 g; The crews included test pilots Hero of Russia Oleg Kononenko, Hero of Russia Oleg Mutovin, Andrey Voropaev, Vasily Sevastiyanov.

The Russian and world record for the rate of climb to different heights with and without payload in the class of serial turbojet ground-based aircraft with take-off weight from 6000 to 9000 kg (subclass C-1f according to the classification of the International Aviation Federation), the release says.

Record flights demonstrated the outstanding capabilities of the Yak-130 and the skill of our test pilots,
said the deputy general director of OKB A.S. Yakovleva ”Hero of Russia Roman Taskaev.

Recall, the combat-training aircraft of the new generation Yak-130 is designed "for training and combat training of flight personnel, as well as combat use in simple and complex meteorological conditions for air and ground targets." According to its characteristics, it is close to the performance of modern fighters at subsonic flight speeds, which allows solving the problem of training pilots for 4-th and 5-th aircraft.

Ctrl Enter
Noticed oshЫbku Highlight text and press. Ctrl + Enter
We are
A new world record on the helicopter MI-38 installed in Serpukhov districtIn the coming years, about 300 Su-30MKI fighter jets will be exported
Military Reviewin Yandex News
Military Reviewin Google News
34 comments
Information
Dear reader, to leave comments on the publication, you must sign in.