March 14 2018
177
The tragedy that occurred in the veterans house in the city of Yontville (California) caused the intensification of the usual controversy between supporters and opponents of toughening weapon legislation, as well as the usual harsh criticism of those and others against the authorities - local and federal. 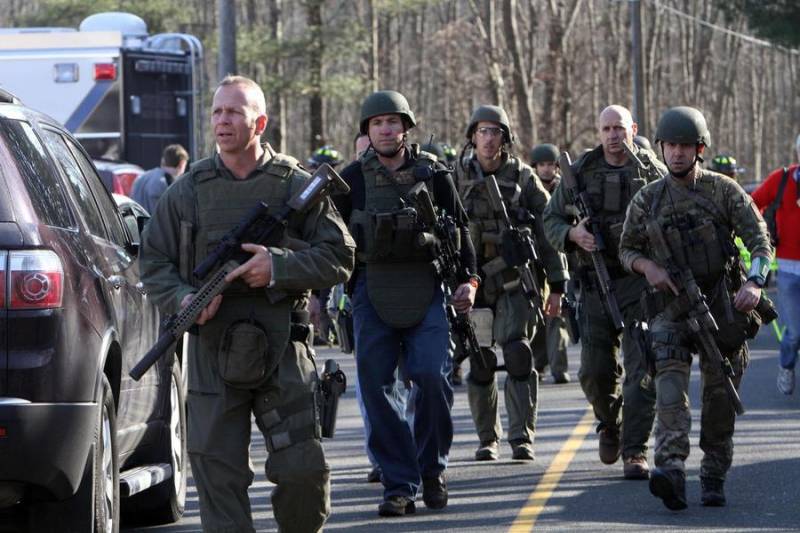 Recall, X-year-old Albert Wong, armed with a rifle, a participant in a program to rehabilitate the military who served in Iraq and Afghanistan, shortly before the tragedy, was excluded from participation in the program to cope with the effects of post-traumatic stress disorder (PTSD) and took three hostages from the veterans home. Later, all three women, as well as the suspect in the crime, were found dead.

In the context of the ongoing controversy, the National Infantry Association of the USA (NRA), which after each such crime the liberals declare almost the main culprit, redirects the accusations to the authorities.

“The law-abiding members of the NRA have nothing to do with the failure of the school security service, the poor performance of the American mental health service, the failure of the national express check system, or the brutal mistake of the federal and local law enforcement agencies,” the organization noted after the previous tragedy in the Florida school that claimed 17 life man.

In turn, the accusations and criticism, from left and right, make the authorities, both federal and state, take some steps. The effectiveness of which is in advance of doubt.

So, after the aforementioned tragedy, Trump urged to tighten the check of people who sell weapon.

“Regardless of whether we are Republicans or Democrats, we must focus on strengthening the checks on biographical data!” He wrote on Twitter.

However, almost the majority of criminals who committed massacres had an immaculate biography. In addition, not all murderers used legal, officially bought weapons.

In the US, such a number of pistols, rifles, rifles and assault carbines in the hands of the population, that it is not a problem to arm yourself illegally.

Moreover, the authorities are well aware that any toughening of weapons legislation, up to a total ban on weapons, will only aggravate the situation, since it will turn, if not all weapons in the hands of law-abiding citizens, its majority into an illegal one. What eloquently shows the experience of other countries. Moreover, even the legal circulation of weapons in the United States is such that it is simply impossible to track the movement of a great many “barrels”. And, accordingly, to withdraw them is also not realistic.

Incidentally, California, where the crime occurred in the house of veterans, a state with one of the most anti-weapon laws in the United States, which, as we see, did not prevent the killer to realize his plan.

And this is just the technical side of things. Tightening predictably provoke a protest of a significant part of the country's citizens. Which today traditionally do not show great political activity. In addition, it will deal a heavy blow to the interests of the producers and sellers of weapons, ammunition and related products, which occupied a prominent place in the country's economy.

Thus, toughening of the weapon legislation, while it risks causing many problems of a criminal, political and economic nature, will not have a special effect. It is absolutely certain that the president will not be able to boast of a quick solution of the problem, and will not be able to write success in this matter into the asset of his future election campaign.

But at the same time, it is necessary to somehow depict the response to what is happening, if only to avoid accusations of inaction, and not to further aggravate one’s already difficult situation.

So, Trump's requirement to tighten “biography checks”, or the decision of Florida Governor Rick Scott to adopt a local act of raising the age limit for acquiring small arms from 18 years to 21 (for which the NRA has already filed a lawsuit against Scott) rather, to imitation of "tightening". With the help of which, they are trying to satisfy the liberals demanding the "disarmament" of the Americans.

However, even conservative citizens, who stand a mountain behind the Second Amendment to the US Constitution, which guarantees the right to keep and bear arms, do not remain without consolation from the authorities.

So, Trump supported the proposal to arm teachers (as a means of preventing school shootings), and the Governor of Florida provided teachers with the right to conceal weapons in schools, which was strictly forbidden before.

According to the established norm, they will be required to undergo the necessary training and testing. However, the final decision on whether teachers will use the new regional act will be taken by the schools themselves in the state of Florida.

Of course, the idea of ​​entrusting teachers with the tasks that law enforcement agencies cannot cope with looks strange, to say the least. However, in the United States, armed citizens quite often prevent crime, and people who are far from the practice of anti-terror units may find this measure practical. In fact, neutralizing a criminal in a school whose students have been turned hostage requires the highest professionalism that cannot be achieved by “preparing and testing” for teachers. And his absence will inevitably lead to greater sacrifices.

In the context of this decision, now, after the staff of the rehabilitation center has been shot, it will be necessary to arm psychologists working with veterans suffering from PTSD. There, you see, it will be the turn of the sellers of supermarkets, cinema workers, hospital staff, waiters, and so on.

That, obviously, will not contribute to a reduction in the circulation of weapons. And it will further undermine the state monopoly on violence, which has already become a fiction in the United States.

In other words, all that the US authorities can offer in the matter of countering the massacres is an imitation of real steps. Moreover, even these simulations only worsen the situation. The more imitate, the worse and worse the situation.

It is noteworthy that in the US there are quite a few people who are well aware of the causes of what is happening. The fact that the problem is not so much in arms, as in the people who use it, in their mental and spiritual state.

For example, a serious attempt to understand the problem was made by famous director Michael Moore. In his picture Bowling for Columbine, he argues that the level of armed violence is caused, above all, by the atmosphere of fear in American society that distracts people from real problems — social and political — and provokes mistrust and hatred for each other.

In addition, he conducted a direct correlation between mass executions and war crimes committed by American soldiers abroad. In the case of the house of veterans in Yontville, we see confirmation of Moore’s version, the most direct one. Americans who participated in unjust, inhuman wars, learned to kill and with damaged consciousness, use acquired skills at home.

Timothy McVeigh, John Robert Newman, Micah Javier Johnson, Gavin Long, Ivan Lopez, Nidal Hassan - these are some of the names of the American military who committed the massacres of their fellow citizens.

Recall that the American Themis, since the time of the Vietnam War, is doing everything to release the US military from responsibility for war crimes, or at least minimize the punishment. Not surprisingly, this gives rise to a feeling of impunity, which leads to the fact that aggression, in the end, turns against compatriots.

However, reducing the cause of armed violence solely to the problems of US external aggression and the lawlessness of the US military would be an obvious simplification of the issue.

It is important that mass executions are nothing more than one of the symptoms of the illness of American society. And his treatment requires a fundamental change in the very foundations and principles of the existence of the society and the US state. Which, of course, looks unrealistic.
As a result, American leaders simply try not to seriously touch the problem of armed violence, which is increasingly threatening to form, in the belief that within the existing political system, any step aimed at resolving it will only worsen the situation. This position in chess is called zugzwang. However, if chess cannot be abandoned, the US authorities try to remain in place, portraying in the eyes of the public efforts to prevent mass violence.

Ctrl Enter
Noticed oshЫbku Highlight text and press. Ctrl + Enter
We are
Situational analysis of the death of the MH17 flight (Malaysian Boeing 777), made on the basis of engineering analysis from 15.08.2014What America has come to
Military Reviewin Yandex News
Military Reviewin Google News
177 comments
Information
Dear reader, to leave comments on the publication, you must sign in.