March 10 2018
47
The large-scale NATO exercises “Trident Juncture”, scheduled for October of this year, have not so much military as much propaganda significance. 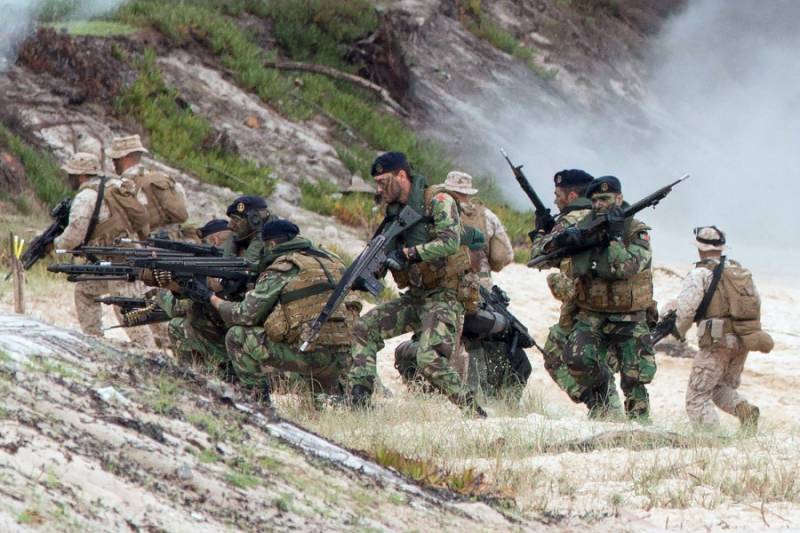 So, it was officially announced that in the autumn of 2018, the NATO countries would hold large-scale exercises near the borders of Russia, in which 45 will attract thousands of servicemen. This was announced by the commander of the US Marine Corps, General Robert Neller.
"This autumn, in October, there will be big NATO exercises, perhaps the biggest amphibian exercises that were held at the height of the Cold War and were called Trident Juncture," said Neller at a hearing in the US House of Representatives. He clarified that it is planned to attract dozens of ships and aircraft. According to him, the maneuvers will be held off the coast of Norway.

The number of fighters declared for these exercises, the planned participation of large amphibious forces fleet (of course, American) and the fact that the maneuvers, apparently, will be led by the command of the US Marine Corps, certainly makes an impressive impression. Especially for the layman, not dedicated to some essential details.

On the surface, you can see only what is beneficial to emphasize the United States itself - the massive participation of the American armed forces in preparing for the defense of the European continent from the allegedly preparing "Russian aggression". And really - outwardly, everything looks very beautiful.
To the shores of Europe, tens of thousands of American marines are instantly deployed on huge amphibious ships, which immediately engage in battle with the “Russian invading forces” and give them a fitting rebuff.

For all the quite obvious unscientific nature of the NATO "hypothesis" of Russia's intention to conquer Europe, we will consider, however, how well-off the military scenario declared by the Americans is in principle. The question is by no means idle, since it cannot be ruled out that under the guise of "European defense", NATO's offensive operations against Russia itself will actually be worked out.
First of all, it is necessary to answer the question - why did the US marines appear on the tip of this NATO trident?

An objective response in itself indicates that it is not from a good life. The fact is that the US armed forces have completely dystrophic ground forces, which are permanently not ready for a big war with a serious opponent. Not to mention the option of instant response to any enemy attacks, for example - in the same Europe.

The only thing that the Americans have at hand is able to run with a rifle in their hands on the battlefield, this is the Marines. Which, for this unenviable reason, is “a hole in every hole”, replacing defective ground troops practically everywhere where it is necessary to stand up for America’s interests. As a result, "tanned scruffs" are now fighting as the most common "infantry" anywhere, from Syria and Iraq, to ​​Afghanistan, who has never seen the ocean-oceans.

On this occasion, even a peculiar crisis of military-strategic thought arose in America. The essence of which is that she had two infantry armies at once - one almost incapable of beating the enemy on land, and the other, which for a long time had no reason to do the same from the sea.

But Americans are practical people. And they, of course, did not begin to break and take to the scrap something, for which dozens of years of overwork and hundreds of billions of bureaucratic dollars failed. That is - the Marine Corps. They began to actively look for a new wide field of activity for him. And, it seems, still found!

This was the field of Europe, morally suffering on the basis of a permanent expectation of the inevitable Russian attack. Since the Americans simply do not have normal, and at the same time sufficient for a powerful life-saving breakthrough towards Europe land forces, the bet was obviously made at the ILC, which, in essence, still had nothing to do.

And which may well be useful in this sense. If you do not want to go to the dump stories for complete uselessness. After all, it has already reached the point that the newest American universal amphibious (!) Ships of the “America” type eliminated the amphibious decks necessary for landing of marines on the enemy shore and replaced them with aircraft hangars! That is, there is a threshold of the collapse of the very concept of landing operations from the sea.

Thus, the American marines are given saving for themselves and, at the same time, the honorable mission to portray from themselves that very “long arm” of America, which will reach everyone and give everyone shortenings.

True, it is very doubtful that they would succeed in a real war. First of all, because, as the Pentagon generals themselves admit, over the decades of the almost complete absence of amphibious landing operations, they have grown up a whole generation of marines who are familiar with the amphibious assault force only from textbooks. And what this leads to could be seen on the teachings of that series “Trident Juncture", which only took place in the 2015 year.

Then the US Marines made a training landing on the Portuguese coast. From what happened as a result of this, almost the whole world laughed. American "all-terrain" Hummers, barely jumping out of the hovercraft landing craft, immediately bogged down with all the wheels in the beach sand. And soaked marines, instead of vigorously attacking the "enemy", were forced in the most shameful way to drag these stubborn mechanical donkeys on themselves.

What will happen to this unlucky army when disembarking an enemy’s real coast, if they cannot even capture a peaceful beach, it is not hard to guess. Moreover, even the American military science itself has invented such a frightening term as the “restricted access zone”, which refers to the fortified enemy coast, which promises nothing to the paratroopers, except for an early burial. It is precisely the presence of such zones in almost all land-dangerous areas, for example, that distinguishes the coast of the Russian Federation. When attempting to storm it, the American airborne assault vehicles will be exposed to a lethal threat long before they approach the landing area.

For example, hypersonic presented recently by the world public by Vladimir Putin aviation the “Dagger” missile system can turn any amphibious compound of the US Navy into a continuous decoration of a horror film at a distance of two thousand kilometers. That is, long before aviation from the American aircraft carriers escorting the landing forces becomes combat-ready. Which itself can be destroyed with exactly the same hypersonic speed.

Therefore, at least, the current excursions of the American landing craft look strange, with hundreds of Marines aboard, to the Black Sea, where they are trying to depict vigorous activity right under the nose of Russian anti-ship missiles. Which, in general, do not care what other newer devices for their detection are installed on American destroyers. Anyway, knocking down these missiles in the very near future will be almost impossible.

This circumstance alone forces us to exclude, as quite incredible, the scenario of the American invasion of Russia from the sea, wherever. As for the "protective function" of the US CPM, as a tool to protect Europe from the notorious "Russian aggression", there is clearly no need to pin hopes on it.

Firstly, because the US Marines, in its essence, are lightly armed infantry, which practically does not have at their disposal heavy systems of land weapons, including major combat tanks. Which in itself makes it very unstable in the face of a full-fledged land invasion army.

And secondly, no matter how beautiful the American marines are, the warheads should not be forgotten that even their total number is about 200 thousand people, of whom not more than one-third are ready for an immediate throw across the ocean into Europe, these are not the forces which can play a key role in any serious European turmoil. And by the time the United States will be able to deploy its full-fledged army of wartime, it may turn out that it will have time only to the cold feet of its European allies. Which is unlikely to become warmer because the heroic corpses of American marines will lie next to them.

Thus, if we summarize the above, we will have to admit that it is scheduled for Europe in October this year. NATO's militarist performance with the US Marine Corps in the leading role, from a military point has almost zero value. And it is nothing more than a populist demonstration of Euro-Atlantic solidarity, designed for an audience with weak nerves and not too savvy in military strategy. To the number of which neither Russia nor your humble servant have any relation.

Ctrl Enter
Noticed oshЫbku Highlight text and press. Ctrl + Enter
We are
Situational analysis of the death of the MH17 flight (Malaysian Boeing 777), made on the basis of engineering analysis from 15.08.2014Results of the week. “In our cooperative, the board is always agreed”
Military Reviewin Yandex News
Military Reviewin Google News
47 comments
Information
Dear reader, to leave comments on the publication, you must sign in.