Syria and Russia on the verge of the failure of the "Afrin Round". The Pentagon and the SDF are considering opening a "second front" 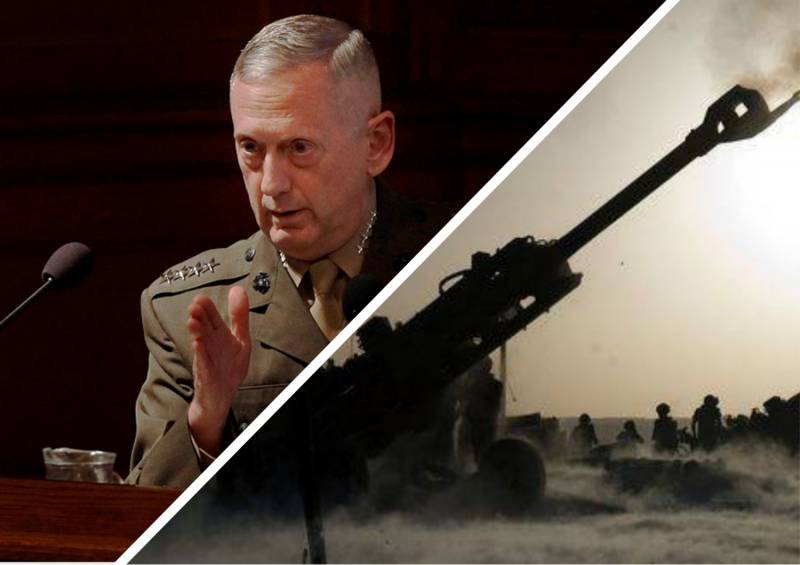 News marked “urgent” come from the headquarters of the international coalition of Syrian Kurdistan. Against the background of a huge number of operational and strategic signs of preparation for applying a new massive missile attack by the US Navy to the most combat-ready units of the Syrian army with the subsequent launch of the “carousel” of SDF hybrid collisions with the CAA at Deir-ez-Zor with forces At-Tanfa is very important news can be considered the beginning of the development of the command of the "Syrian Democratic Forces" (SDF) large-scale offensive operation controlled by pro-Turkish formations "el-Babsk th "bridgehead. This is reported in the news block of the online map of syria.liveuamap.com with a link to informed sources in Manbij and Hasek.

To do this, the SDF is removing a large number of fighters from fortified areas officially holding back the powerful “left-bank enclave of ISIS” east of Es-Souvar, which, logically, can lead to a weakening of the defensive barrier against the pseudochaliphate and its further spread on the eastern bank of the Euphrates. Using this false information, representatives of the US Armed Forces command are trying to blur the eyes of the world community, using the false method of stating that "they warn the SDF field commanders about the consequences of distraction from fighting ISIS." But we all know for sure that there is already a non-aggression agreement between the Americans, the Kurdish SDF detachments and the command link of the IG in the “West Coast enclave”. In the role of the enemy, this enclave is presented by the Americans only for the media. In reality, the terrorists are gradually filtered out of this huge boiler and along the Essaouvar-Haseke highway are being transferred to American training camps in northeastern Syria as “cannon-fodder” for the newly formed “Syrian Army”. paramilitary component for hybrid operations against Syrian government forces. Other layouts here are completely excluded. Now let us return to the situation with the storming of the “El Babskii bridgehead”, which we briefly mentioned in our previous work.

As it became clear a week earlier, the Pentagon and the YPG territorial units in Manbidzh cooperating with him thoroughly examined the situation with the unwillingness of Bashar al-Assad to send full-fledged units of the Syrian Arab Army to Afrin at the official level: to great regret, all military support was limited only by the arrival of many kilometers of convoy forces. NDF (National Defense Forces) militias and Hezbollah troops. At the same time, all actions to protect Syrian sovereignty in Afrin were only yesterday’s statements by Bashar al-Assad that “the introduction of popular forces into Afrin is natural when there is aggression from outside”. It is quite clear that it is impossible to save the lands of the Kurdish canton from the pro-Turkish FSA and the Turkish armed forces alone with statements of this kind.

Taking advantage of this vague position of the Syrian leader and military leadership of the CAA, the Syrian Democratic Forces and the US Central Command decided to preempt and win an unconditional victory in the “Afrin Round” by introducing the SDF units in the canton and then covering them with F-22A and Squadrons "Strike Eagle" from the Turkish army. What is remarkable, in this case, Washington "kills three birds with one stone":

- gets full control over Afrin (after the transfer of thousands of anti-tank weapons to the Afrin detachments of YPG / YPJ and the start of fire support from the US Air Force against FSA groups), after which the border areas captured by the pro-Turkish forces will be released;
- becomes a “hero and liberator” for the local Kurdish population (Yezidis, Arabs, Christians), receiving his loyalty and sympathy, in addition to the support of any military-political initiative coming from the Trump administration;
- finally “expels” Damascus and Moscow from the military-political agenda in the north of the Aleppo Province. Such an extremely unpleasant and painful prospect looms in the coming weeks / months ahead.

At times, the more unpleasant consequence of the emergence of the military infrastructure of the US Armed Forces in Afrin will be the mutually beneficial cooperation of the latter with the cells of Tahrir ash-Sham and the Free Syrian Army in the occupied Idlib gadyushnik. Numerous negotiators and other obscure individuals representing the headquarters of the Western coalition and the US Armed Forces will have the opportunity to bribe terrorists in Idlib, following which pro-American forces can easily move throughout the Idlib Gadyushnik, up to the eastern border of Latakia province. And there certainly will be no time for jokes. Why? The distance from the FSA / en-Nusra-controlled city of Kafr Nabudah to the Hmeimim airbase is just 50 km, which means that one can expect unceasing exhausting attacks of homemade drones, "equipped" with various explosive bags, fragmentation warheads, mines with contact fuses and t .d As you remember, the massive use of self-made short-range drone UAV against Avb Hmeimim and PTEC Tartus has already taken place on the night of January 6 2018. 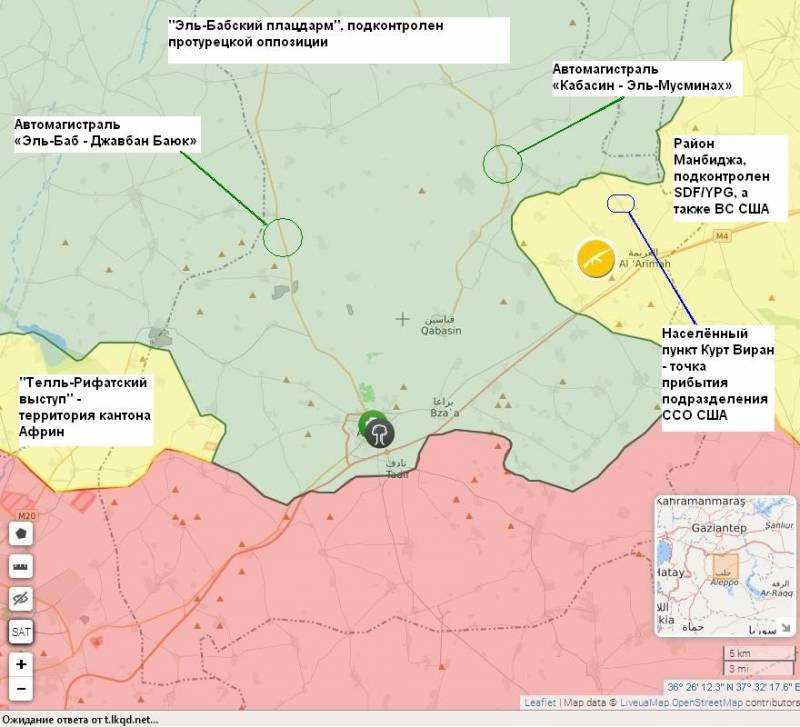 Let us return to the military-political and tactical part of the breakthrough of the “corridor” from the “El-Arimah ledge” to Afrin. As it was possible to understand in a few days, a possible operation of the coalition forces and the SDF is planned in such a way that the mosquito of the nose does not undermine. The first thing that was done was to search for the most tactically advantageous positions for the start of an offensive operation, as well as reconnaissance of the transport interchange, at which advanced units of the Free Syrian Army in the area of ​​Kabasin and Al-Bab receive reinforcements, fuel, and ammunition from the Turkish border . This road junction is two highways: Kabasin - El Musminah and Al Bab - Javban Bayuk. The fire control of these highways with the Riper attack drone, as well as the Apache Longbow AH-64D attack helicopters at the time of the SDF, will make it possible to completely cut off the arteries of the FSA supply through the Kabasin-El-Bab line.

As we indicated above, the actions of the army aviation with the direct support of the SDF, they will be hiding behind the Raptors in conjunction with the E-3G AWACS aircraft, which are barraging around the Euphrates. The Green Berets, who arrived in the village of Kurt Viran back in late February, carried out reconnaissance of sections of the contact line to launch the offensive, which our agencies reported 6 days ago. The advancing forces from Manbij’s SDS will need to storm a stretch of only 23,5 km from Al-Bughaz to Khirbat al-Duwara (the latter is located in the canton of Afrin), after which a huge stream of pro-American troops YPG and SDF will flood into Afrin. At this point, Damascus can forget about these lands in the province of Aleppo. To prevent such a scenario is possible only by the speedy introduction of the official military contingent of the Syrian Arab Army in Kurdish Afrin. And this needs to be done as quickly as possible, because the US defense department has already announced the bad influence of the Olive Branch on the protracted operation against the IS and even officially canceled all operations against the IS within the Euphrates (despite the undisguised abundance of weapons), which means the denouement close as ever.

Ctrl Enter
Noticed oshЫbku Highlight text and press. Ctrl + Enter
We are
A coalition led by the United States is preparing a hybrid strike on Syria. "Green berets" seen in the "el-Babskiy bridgehead""Euphrates fist" CAA under the threat of "Meyadinsky boiler." Important facts are not in favor of reducing the Armed Forces in Syria
Military Reviewin Yandex News
Military Reviewin Google News
66 comments
Information
Dear reader, to leave comments on the publication, you must sign in.