Putin "showed the movie" to the West

March 2 2018
344
President Vladimir Putin’s message to the Federal Assembly of Russia 1 in March 2018 of the year was the message of the United States and the entire collective West, in general, a response to sanctions, attempts to isolate or surround Russia and, finally, the US’s “de-escalation by nuclear escalation” strategy, that is, the threat of tactical nuclear weapon on your own. 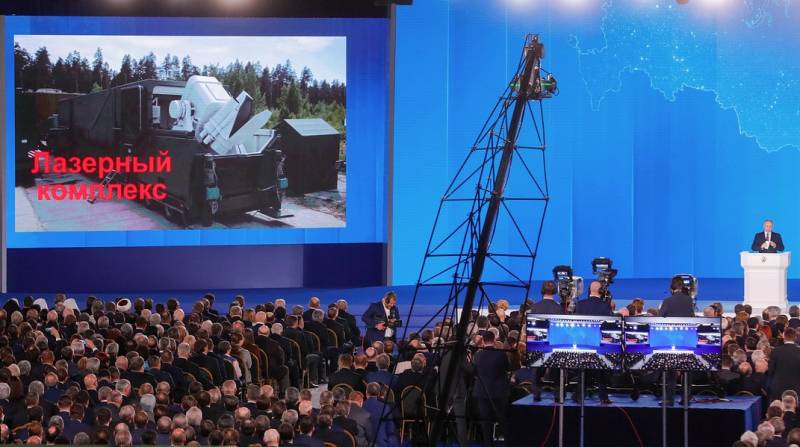 Putin answered all this in his message: Russia has a hypersonic nuclear, laser and other types of high-precision weapons equipped with small-sized nuclear power plants. "That's enough for today." Demonstration videos of the new weapons were shown, and this was a very impressive movie.

"There is nothing like this in the world," Putin added, and Defense Minister Sergei Shoigu then called the American missile defense system "an expensive umbrella full of holes."

Vladimir Putin called this Message of the Federal Assembly of the Russian Federation "milestone". This was the US message, comparable to the Soviet Union's installation of missiles in Cuba during the Caribbean crisis in 1962. “Putin has declared world war on the world,” some world media are now shouting, others are talking about Putin’s “stunning statement,” Bloomberg called Putin’s speech “a show of force and a tough US warning.” Our politicians, on the contrary, say that now "there will be no war." Like after the Caribbean crisis.

Putin’s speech at the Manezh can be easily put on a par with his Munich speech, 2007, when he called the United States "a comrade wolf who eats and does not listen to anyone." “Nobody listened to us, listen now,” Putin said. And they didn’t listen to 2004, what did they do all this time?

US President Barack Obama has blatantly lied to us that missile defense in Romania and Poland is directed against Iran and the DPRK, and not at all against Russia. NATO "peacefully" expanded to the borders of Russia, until it expanded to Ukraine, and the European Union embarked on a Euro-association of Ukraine in the 2014 year.

The world has long been at a fork, and not through the fault of Russia. "We did not leave the missile defense." In 2014, the United States and Europe crossed the red line in Ukraine, inspiring and supporting a coup against the legitimate authority of President Yanukovych. We did not cross the red line, so do not let us retreat.

Now it is clear why Russia, with 2014, is pulling the "Minsk rubber", and is silent on insults and rudeness of our Western colleagues. Russia was arming and now "everything happened", most recently, at the end of last year. A nuclear-powered cruise missile was tested at the end of the 2017 of the year. Putin himself controlled the creation of new types of weapons, spokesman Dmitry Peskov said.

Now Russia is offering the US talks, but from the position of the newest weapons reached by Russia. After the Caribbean crisis, detente began with the recognition of the mutual military parity of the parties, so there is a chance of a new detente in relations with the United States.

In “60 minutes” Nikita Isaev, the ex-president of the “Football Academy”, again distinguished himself with his speech in the spirit of Smerdyakov from Dostoevsky's novel. Nikita admitted that "the United States has the right to be a world gendarme." And our Ministry of Foreign Affairs defamed that he could not agree with this gendarme, that is, did not give him a bribe in the form of concessions. And now, instead of agreeing with the world gendarme, we gave him our latest weapons. Nikita wanted to serve the world gendarme, and now he received a complete bummer, and he was moaning about the backward Russia in sudrydakovsky, he was not at all pleased with our small-sized nuclear power plants.

Coincidentally, Gazprom refused to allow Naftogaz of Ukraine to supply gas to 1 in March due to the fact that an additional supply agreement was not signed, and returned the prepayment. And he accused the Stockholm arbitration of double standards in a lawsuit with Naftogaz. Perhaps this is not a coincidence, but a new economic policy of Moscow, and not only in relation to Bandera’s Ukraine.

Ctrl Enter
Noticed oshЫbku Highlight text and press. Ctrl + Enter
We are
Results of the week. "Everything! Kina will not be! Electricity is over! ”Putin March 18 will deliver a message to the Federal Assembly on the Crimea
Military Reviewin Yandex News
Military Reviewin Google News
344 comments
Information
Dear reader, to leave comments on the publication, you must sign in.