Armageddon 2018 of the year: soon on the entire planet

March 2 2018
66
Who will win the 2018 battle of the year? Where are those good forces that will save the planet and overcome the chaos spreading around the world? Maybe this is the Chinese? Or is it the Americans? But do old poles matter in a new multipolar world? There is only one way to restore stability in a complex world, which is characterized by inequality of forces and technologies: to abandon confrontation and move to a policy of compromise. But states will prefer war. 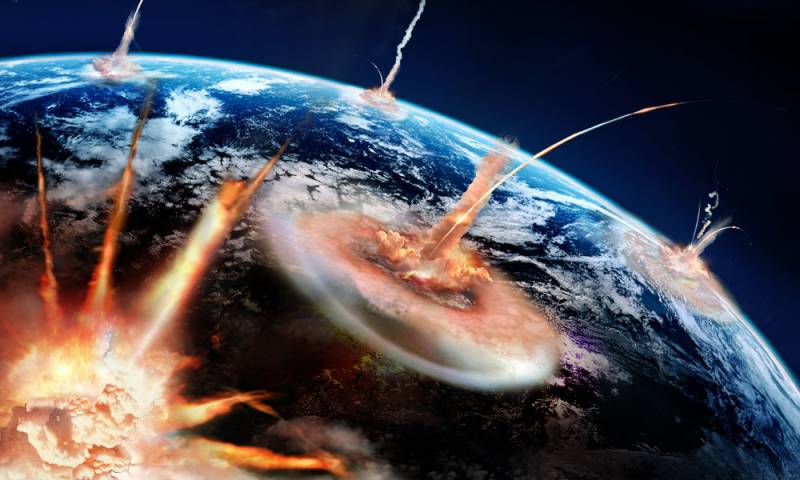 Mr. Sidhu is a professor at the Center for Global Issues at New York University and a senior nonresident research fellow at the Brookings Institute.

The expert is convinced that the first among intrastate conflicts is the war in Syria and "around it", in which Russia, the USA, Iran, Israel and Turkey participate. It is quite possible "serious escalation" of the conflict.

After the negative predictions made on the eve of 2018, after the publication of the annual World Risk Report 2018 of the World Economic Forum and after discussing global order issues at the annual Munich Security Conference at the highest level, it became clear that 2018 promises to become devastating, dangerous and full of chaos, ”as promised by the forecasters.

First, domestic conflicts are intensifying. The expert varies them from urban violence to terrorism, from the seizure of uncontrollable spaces by extremist groups to separatist movements and, finally, the most terrible - civil wars.

These conflicts, in his opinion, are already characteristic of all continents. Mainly in conflicts used shooting weapon, as well as light weapons. However, the use of chemical and biological weapons was observed in some conflicts. In most of these conflicts, the victims were innocent civilians, the author points out.

Secondly, interstate conflicts and wars between regional subjects that are fought by proxy grow. The confrontation of global powers, including the states possessing nuclear weapons, is growing. Among them is “chaos with military intimidation” in and around Syria with the participation of Russia, the USA, Iran, Israel and Turkey, where serious escalation is possible, the expert believes.

Iran and Saudi Arabia collide in a similar way with each other: this happens in Yemen.

In the meantime, China is challenging all the powers that have interests in the South China Sea. Disputes over territories include “various interpretations of international norms and laws”.

Combined with weapons modernization programs and doctrines that allow the use of nuclear weapons, the nature of emerging inter-state conflicts contributes to global chaos leading to a nuclear clash. Indeed, the latest “Nuclear Policy Review” published in the United States caused many to be afraid: what if the “nuclear world” would give way to the “nuclear war” in 2018?

Third, there are many old and new international threats that no single country can cope with. They range from pandemics (for example, recent outbreaks of Ebola and Zika virus), natural disasters (tsunamis and earthquakes), climate change, global criminal networks, international extremist organizations, and cyber attacks spreading across the planet.

The latest UN report on North Korea showed: despite strict sanctions, Pyongyang was able to circumvent restrictive measures thanks to "a complex distribution network that passed through China, Europe, Russia and Malaysia."

Such trends regarding world security are exacerbated by several new factors, which also contribute to global chaos, the author continues.

First, it is the emergence of ultranationalist populist leaders and governments that put their own states at the forefront and challenge globalization as a whole.

Such a nationalist policy led to the fact that some of these states abandoned international agreements and treaties to which they had previously joined. Moreover, many of the nationalist leaders either openly rejected multilateralism and pluralism, or questioned international processes, norms and institutions.

Secondly, the multipolar world as such is slipping into chaos. The modern world is moving towards political, economic, technological and regulatory multipolarity, but at the same time the ability to project power throughout the world (and thereby ensure global security) remains in the hands of one, perhaps two, powers: the United States and China, which is increasingly mentioned as one of the leaders.

Although countries like India can form new rules of global governance, they are not able to enforce them. If the new powers are not able to contribute to global security, then multipolarity will retain its "problematic".

Thirdly, such multipolarity is also manifested in decision-making on most domestic, regional and global issues. This is due to the emergence of many stakeholders in the decision-making process at the national, regional and global levels. These stakeholders, including civil society, the private sector, foundations, individuals and cities, not only give rise to problems, but also support the global confusion with their solutions.

Fourth, the rapid pace of development and diffusion of technology creates the possibility of increasing the influence of individuals, small groups and weak states. This can create asymmetric competition.

Nationalism, multipolarity and multiple stakeholders create, as a result, an “almost insurmountable gap between new technological capabilities and the ability to create norms and institutions to manage them.”

The question of propaganda stands apart. It has always been a "key tool of destruction," the author notes. This has been the case, at least in previous global conflicts. But today there are global social networks. Their activities bizarrely blend objective messages with fake ones. The networks involved the army "trolls". All this opens up the possibility of cross-border influencing millions of people and creates new threats instantly. This is especially noted when they talk about Russia's interference in the US 2016 election of the year.

The tendencies listed by the author indicate that global chaos is approaching a “dangerous phase”.

If you look into history, then you can see only two ways to restore world order. The first is the corresponding leadership and the emergence of statesmen who would like to invest political and diplomatic capital in restoring the world order. It depends on the willingness of key leaders and nations to make compromises and return to cooperation.

The second way is confrontation, which is aimed at strengthening the power of one people through the infringement of other peoples. This approach "often seeks a military solution," indicates Mr. Sidhu, and it is this approach that "often becomes the lot of weak populist leaders with strong armies."

Expert opinion: global trends in 2018 show that the planet is on the second path.

If you read Mr. Sidhu between the lines, it will become clear: by “weak populist leaders with strong armies,” he means Russia. Russia is only incidentally mentioned in his material, but all Western politicians are unanimous about the modernized and dangerous Russian army in a weak Russian economy. And this expert can not be "in trend."

And Russia has already been appointed the main culprit for the coming chaos. Where and by whom? In the White House by Mr. Trump.

The other day, Donald Trump accused Russia of pursuing a policy against US interests and declared a split, disagreements and chaos that could be Moscow’s goal.

“If this was Russia's goal - to create a split, disagreements and chaos in the US, then, with all these hearings in committees, investigations and hatred between the parties, they succeeded beyond their wildest expectations. They burst out laughing in Moscow there, ” wrote American president on Twitter.

Previously, recall, US special prosecutor R. Muller and the federal grand jury accused thirteen Russian “trolls” led by E. Prigozhin of interfering in the election of 2016 of the year.

The idea of ​​appointing a “guilty” person responsible for the chaos in the world has always been attractive to a leading world power: by rushing to point your finger at any “bad guys”, you can sign up as a fair judge and decision maker of the world.

And not without reason tseerushniki with experience count them. American intervention in foreign elections is an acceptable and useful act, sowing democracy and freedom. Russian is not allowed to do anything like that. Just because they are “bad guys” in the language of the scouts.

Observed and commented on Oleg Chuvakin
- especially for topwar.ru
Ctrl Enter
Noticed oshЫbku Highlight text and press. Ctrl + Enter
We are
Inequality in education. Only affordable education will make Russia a strong state.Results of the week. "This is not for you ..."
Military Reviewin Yandex News
Military Reviewin Google News
66 comments
Information
Dear reader, to leave comments on the publication, you must sign in.