March 1 2018
64
Chief of Staff of the United States Air Force David Goldfein, made a statement that suggests the resuscitation of the legendary American program "Star Wars". 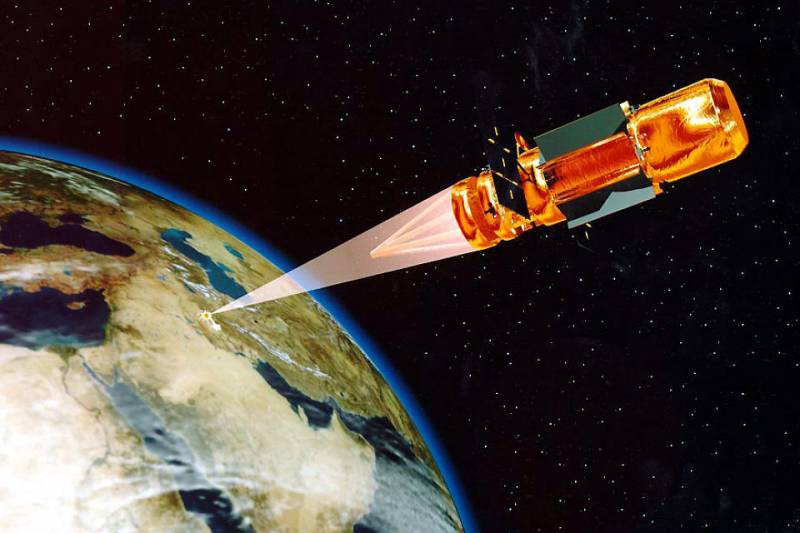 Speaking at the Symposium of the Air Force Association in Orlando, he announced that the war in space was a matter of the near future.

“I believe that we will strike from space in a few years. And we are the arm of the army, which must lead the joint hostilities in this new contested territory. This is what the country requires, ”the Air Force Chief of Staff said, adding that the United States needs to achieve superiority in outer space.

This is not to say that this performance was especially unexpected. In November of last year, Chief Goldfein, US Air Force Secretary Heather Wilson, during a briefing at the Pentagon, announced that her agency was going “to consider space as a space for conducting military operations.”

“We are promoting modernization in the field of space in order to increase our power in all areas of our activities,” the minister said at the time.

However, we recall that at the end of December 2017, space launches in the interests of the US military were at risk. This happened due to the fact that SpaceX, United Launch Alliance (ULA) and Aerojet Rocketdyne (AR), the US aerospace companies, which carried out orders to launch military satellites, allowed numerous, sometimes catastrophic disruptions in work.

To this we can add that, according to American experts, cited in The Wall Street Journal, technical and financial problems will force the Pentagon to use Russian RD-180 rocket engines at least until the middle of the next decade, that is, several years longer than originally intended. .

Also in the United States is not being conducted and is not even planned (at least until today), the development of shock weapons for action from space. Moreover, experiments of this kind are prohibited by congress. Such today there are prerequisites for American "space superiority."

At the same time, it should be noted that the statement by Goldfein referred to us in the 80-s of the last century, and to the Star Wars program or Star Wars or Strategic Defense Initiative (SDI), which was then proclaimed by the Reagan administration.

She suggested the creation of a missile defense system, the main part of which should be the most powerful lasers placed on orbital satellites. This utopian, unrealizable project, among other things, had to force the USSR to recognize Star Wars as the greatest threat, and start spending huge amounts of money on countering the mythical danger.

Unfortunately, the Soviet leadership ignored the opinion of Russian science about the categorical impossibility of creating such a system, and fell for this American bait. Huge funds were wasted, causing enormous damage to the USSR, which may have been one of the reasons for the “perestroika” and the collapse of the country that followed it.

So the current declaration may be a prelude to a noisy propaganda campaign around the next American “miracle weapon”, in order to draw our country into the next arms race, force it to fight ghosts and overrun in this pursuit.

Although, hoping to lure Russia a second time into the same trap a second time is probably somewhat naive.
In addition, behind a statement about the impending war in space, there may be the desire of the US Air Force command to extract additional funding for its own, more realistic projects.

Note that the budget of the US Air Force for space programs this year is 7,75 billion dollars, which is 20% more than in 2017. Next year, this item of expenditure is planned to increase to 8,5 billion.

Air Force Minister Wilson, speaking of the increase in allocations, noted that additional investments could go to the "cost-effective modernization" of space development. Sounds somewhat mysterious. However, if we look at the experience of the PIO, we can recall that, not having achieved the initially stated goals, it brought big dividends to the Americans, not only geopolitical ones. Within the framework of the “space wars” program, a lot of interesting research was carried out, a lot of advanced developments were created, and new technologies were mastered, which formed a big foundation for the development of the high-tech sector of the American economy in the 90 years. And it is quite possible to recognize such modernization with all grounds as “economically viable”.

SOI was not only an experimental platform, but also a profitable business project, funded by the US allies, on a “voluntary - coercive” basis.

Most likely, the performance of David Goldfein and should be considered in this vein.

As for real military space programs, the United States has a weapon capable of shooting down satellites - the Aegis Combat System. Russia and China have similar systems. But this is not a space, and ground (air, sea) weapons to fight with satellites.

Ctrl Enter
Noticed oshЫbku Highlight text and press. Ctrl + Enter
We are
Situational analysis of the death of the MH17 flight (Malaysian Boeing 777), made on the basis of engineering analysis from 15.08.2014Results of the week. “In our cooperative, the board is always agreed”
Military Reviewin Yandex News
Military Reviewin Google News
64 comments
Information
Dear reader, to leave comments on the publication, you must sign in.