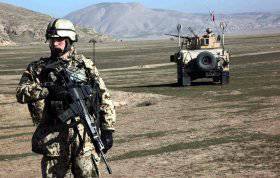 Ukraine is ready to consider the possibility of providing transport aircraft for the transport of NATO troops from Afghanistan, said Foreign Minister Konstantin Grishchenko. "Our transport aviation there is still no alternative for large-scale transportation within the framework of major operations of the alliance, "Grishchenko wrote on his page on Twitter.

The Foreign Minister also noted that today "once again he was convinced that the three words that characterize our interaction with NATO are intensity, pithiness and mutual benefit."