Is Vladimir Plakhotnyuk a mystery man or a semi-finished system?

February 15 2018
15
Sometimes it seems that the Moldovan authorities are in some kind of unofficial competition with their Ukrainian colleagues in the inadequacy, but the odiousness of their decisions. The broadcasting of Russian TV channels will be banned, the ambassador will be recalled from Moscow for “consultations”, the Moldovan language will want to be renamed into Romanian, it’s true, to at least smear the rails along which independent Moldavia is drifting towards Bucharest.


Only one thing remains unchanged - the name is Plahotniuc, which pops up every time in the Moldovan politician after another excesses. Moreover, thanks to the media, Plakhotnyuk is a sort of Moldovan Fantômas, only without a mask. Even the Moldavian press often calls Vladimir Plakhotnyuk a “Moldavian puppeteer”. But what is known about him?

Vladimir Plakhotnyuk was born on January 1 1966, in the village of Pitushk, Kalarashsky district, Moldavian SSR. In 1983, he graduated from high school in the village of Grozesti, Nisporeni district. But to remain the first guy in the village of Volodya did not want to. And then he went to the storming of the capital - "I came from the village, the train brought." In 1991, he graduated from the Technical University of Moldova at the Faculty of Food Technology, with a degree in engineering. Later, he will receive more than one degree and not one “higher education”. When he was engaged in all this is somehow unclear, therefore accusations of purchasing diplomas sound very plausible in this context. But what did the young Moldavian young man do while “gnawing the granite of science”?

And here begins an interesting. Since 1991, Plakhotnyuk has been working in the Center for the Prevention and Rehabilitation of Juvenile Victims of Violence “Minor”. The guy seems to be sowing a reasonable, kind, eternal ... But, according to his opponents, including the political opponent Sergey Mokan, it was then that he made his pimped slavery empire. Thanks to a series of beauty contests and other similar events, as well as influence inside the Minor center, which had plenty of defenseless and weak-willed victims, Plahotniuc arranged for the supply of live goods to Europe. 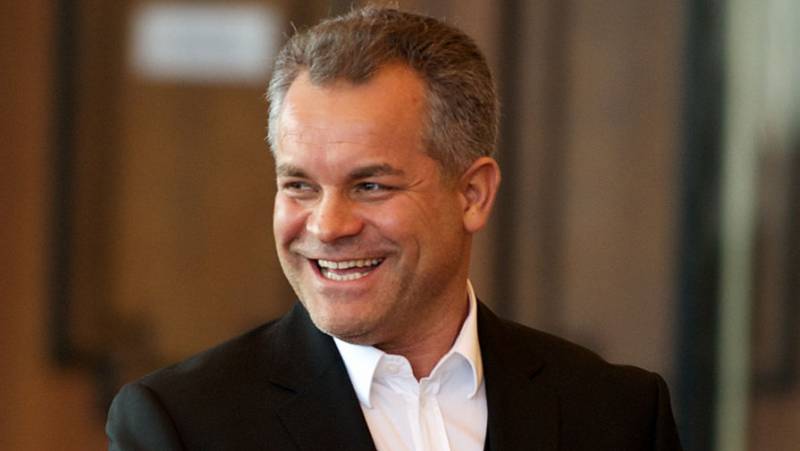 Again, according to his opponents, Plahotniuc cleverly used the pimps business to create his “intelligence network”, blackmail officials and politicians greedy for strawberries, and also just to build friendly bridges. Probably after a good sex and a pair of three glasses of Moldovan wine such bridges are much easier to induce. Soon, on the basis of the Minor office, the company Minor SRL emerges, later renamed Finpar Invest SRL. And begins the march of "businessman" Plahotniuc in Moldova. In parallel, Volodya works as an economist in the essentially foreign company Euro Est Hundel Ltd Moldov. In 1995, this man-orchestra founded the American-Moldavian financial group Angels, and already in 2001-m, Plahotniuc creeps into a more than popular and profitable business - he becomes the commercial director of the company for the import and sale of oil products Petrom Moldova. Later, it will turn down the banking sector of Moldova in the form of the largest bank Victoriabank.

It was then that Volodya met Oleg Voronin, the son of the then Moldovan President Vladimir Voronin (the leader of the Communist Party of the Republic of Moldova). By the way, after the father was shoved off the presidential throne, Oleg revised his views on his old friend. As a result, Voronin made the following statement, in essence, confirming some of the charges that were being charged to the former comrade:

“Where is he, all those deals that I allegedly concluded by force before 2009 of the year?” All of them have Plahotniuc. It was he who put his hand on them in his own manner, after which he spread rumors that I was doing this. In the days of the Communists, he hid, abusing my trust and the confidence of some leaders of the PCRM. Now he does not abuse anyone's trust: he acts directly, in the manner of raider attacks. ”

However, at the time of his tender friendship with Oleg, Plahotniuc goes back to the top of the Moldovan economy. He really becomes a collector of companies of various activities. The only constant is one thing - an extremely muddy path to mastering these same companies and the indispensable scandals.

In what only teflon Volodya was not accused. Both in the actual raider seizure of the Tutun CTC tobacco factory, and in the illegal seizure of control over wine and bakery plants and factories, and in the privatization of a whole list of enterprises (State Enterprise Moldova Railways, State Enterprise Stations and Bus Stations, State Posta Moldovei, SE "Registru", SE "Radio Communications", etc.) that used to belong to the state, etc. No less scandalous and became история with Volodya gaining control over Victoriabank.

In the 2005 year, Plakhotnyuk, according to the former director of Victoriabank Victor Turcan, came to him with a proposal, as they say, impossible to refuse. Victor Turcan testified:

"He (Vladimir Plakhotnyuk) announced his intention to acquire a controlling stake in the bank and warned that if I interfered with this, they would destroy me, promising to organize the nomination of charges of bribery, participation in smuggling against me weapons, drug.

As a result, Victor Turcan was indeed arrested. And it soon became clear that Viktor, who seemed to be so vehemently defending the bank and his place, lost his shares. Therefore, when some experts say that without the knowledge of Plakhotnyuk in Moldova and the vegetable shop will not open, this is not too far from the truth.

Finally, it becomes clear to Plakhotnyuk that since money comes as a bonus and power, then it’s time to go directly into government offices, not through an acquaintance. Since 2001, Volodya is in full swing into political activity, but so far from the back door. The media becomes aware that the main investor of the Party of Communists of the Republic of Moldova was ... Plahotniuc. Why did oligarch Plakhotnyuk merge in such ecstasy with the communists? Because the leader of the party was the president himself - Mr. Voronin. No ideological friction is pure business. 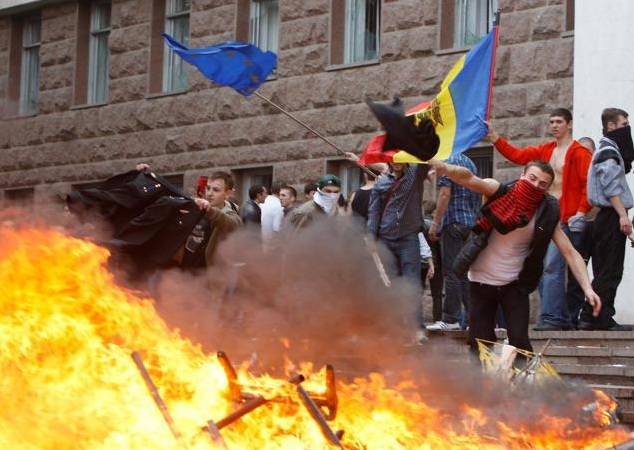 The riots that swept Chisinau in 2009 year. And the indispensable flag of the EU

In 2007, the wind changed. It became known that it was not the local obedient internal organs that were intimidating Turcan that began to look after the Moldovan Fantômas, but Interpol, suspecting Plahotniuc of a dozen different feats (from the connection with international crime to drug trafficking). Soon Voronin Sr.’s throne was reeling, despite the fact that Mr. “Communist” had just recently seemed omnipotent. By the way, the question is whether Plakhotnyuk and his capital are involved in removing the mass of aggressively hysterical youth on the streets of Chisinau in 2009, the year remains open. Anyway, Voronin resigned his powers as head of state, and the following year, Plahotniuc was included in the party list of the Democratic Party of Moldova. Presumably, the decision to include in his principled and infallible democratic ranks of the former friend of the president’s son, whose resignation took place against the background of unrest no worse than Maidan, was exclusively disinterested? 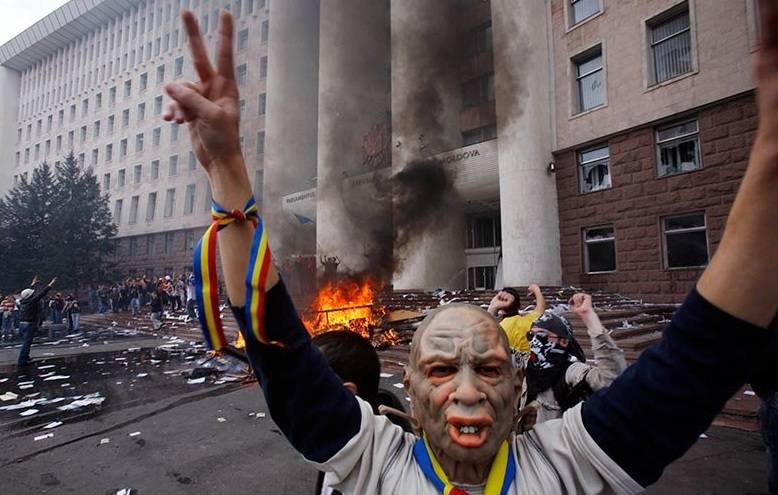 The Democratic Party of Moldova adheres to the ideas of liberalism and Euro-Atlanticism, which is undoubtedly more convenient for Plakhotniuc. And most importantly, for the West, Volodya turns from a parochial feudal lord with a dark past into an ideological and political ally. The rhetoric of Vladimir Plakhotnyuk is practically no different from the speeches of his “colleague” from Ukraine, Petro Poroshenko - here there are various “reforms”, and the eradication of corruption, and, of course, the most important “carrot” for the population, i.e. joining the EU. After all, according to Volodya, Europe is the cultural and geographical home of Moldova. Here it is.

It should be noted that Plakhotnyuk is an exceptional organizer and organizer of various schemes. Within a few years after the entry into the PDM party, Plahotniuc, other citizens from neighboring parties, apparently not wishing to “fall out of the cage,” pulled themselves up to it. Vladimir himself quickly cleared his way to the chairmanship of the party and in 2016, he headed it. But according to the old habit, he still prefers not to go out openly to the main roles. Plakhotnyuk is not a prime minister, not a chairman of parliament, not a president (which is problematic in principle because of the low rating of this famous gentleman). And why does he need it? Pavel Filip, former general director of the notorious Tutun CTC and PDM member, Andrian Candu, the chairman of the parliament, is often Prime Minister, and again a member of the PDM, according to Moldovan media. And, thanks to the hard work on the role of the president, his status in modern Moldavia is relegated to a wedding general. So, if the title Fantomas Plakhotnyuk has not yet earned, then his nickname "puppeteer", assigned to him by the media, is fully justified.

For the sake of truth, to consider Vladimir as a certain phenomenon would be incorrect. Since most often such people are just a product of the environment in which they were formed. For example, if it were not for the collapse of the USSR, then perhaps we would have known citizen Khodorkovsky as a “fiery Komsomol member”, and later on a “staunch party member”, i.e. would choose Misha most profitable career. But what we have.

And Mr. Plahotniuc is by no means worse than his entourage. Just a talented guy turned out to be intriguing than rivals. By the way, these same rivals for the interests of Russia, in my humble opinion, are no better than Volodya himself. First of all, if the political elites of Moldova didn’t have the stigma in the cannon, they wouldn’t let Plakhotniuc come to power, given the lack of popular support for this person. Of course, except for those screaming crowds that can now be bought wholesale and retail. Secondly, for example, citizen Mocanu, an ardent opponent of Vladimir, had not only the dubious honor of participating in the Transnistrian massacre on the side of “independent Moldova”, but, according to him, he is ready to repeat this “feat” again. For such people stretch long tracks. And no matter how violently Mocanu and his Antimafia movement were, he was just the unlucky version of Plakhotniuk. By the way, Mocanu himself does not even hide the fact that he does not declare a part of his income - this is such an “anti-mafiazi”.

For Russia, however, only one thing is important - to know the weaknesses of a Moldovan politician and, as usual, keep the powder dry.

Ctrl Enter
Noticed oshЫbku Highlight text and press. Ctrl + Enter
We are
Reports from the militia of New Russia for 27-28 September 2014 of the yearResults of the week. "Well, do not change me because of every idiot!"
Military Reviewin Yandex News
Military Reviewin Google News
15 comments
Information
Dear reader, to leave comments on the publication, you must sign in.