Turkish march in a waltz tempo 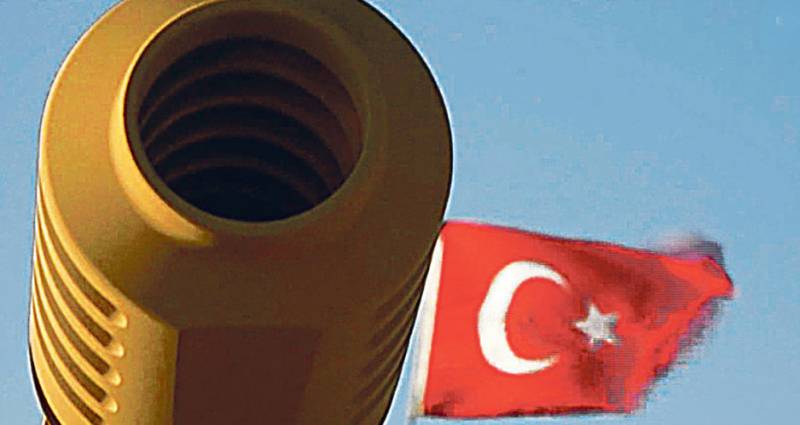 Operation Olive Branch continues for a second week. The goal is to clear Afrin from the Kurdish formations, a region in northern Syria.

Since the outbreak of hostilities, the units of the Turkish armed forces and the detachments of the Syrian opposition supporting them have achieved some success. But in general, the "Olive Branch" is going quite slowly. This gave the reason for many foreign experts to state that the Turkish group does not cope with the tasks. Let's try to figure out what is happening in Afrin.

Currently, the Turkish group completes a sweep of the territory in the border area. Most likely this was the task of the first stage of the Olive Branch (“Unkind“ branch ”). In a similar scenario, Ankara acted during Operation Euphrates Shield: clearing the border, the Turkish command creates a kind of buffer zone. Two targets are being pursued. The first is to secure the territory of Turkey from raids by Kurdish troops, the second is to create a basis for further hostilities.

At the time of writing, the units of the Syrian Free Army, supported by Turkish special forces and tanks occupied the height of Barsaya - 860-meter hill. His capture marked the beginning of the second phase of the operation - the fighting in the area of ​​the capital of the Kurdish enclave.

Barsaya is an important natural obstacle to Afrin, covering the city from the north. In the coming days, developing tactical success, the Turkish group will begin to “spread its elbows” - to capture the nearest heights and gain a foothold on them. And then the Turks will transfer artillery there, the fire of which can effectively hamper the actions of the Kurdish formations both in Afrin itself and in its suburbs. With a high degree of probability, we can assume that the Turkish group will not go to storm the city yet. Its task is to shackle as many Kurdish troops as possible in Afrin itself and on the approaches to it and inflict maximum damage to them with artillery fire and aviation blows.

Dilemma for the Kurds

Loss of Afrin can be a serious ideological defeat for the Kurds, but under the domination of the Turkish artillery and aircraft, his defense will cost too much. Especially given the fact that the attackers do not intend to protect civilians. Therefore, soon the Kurds will have to solve a difficult task - to leave Afrin, or at any cost not to give it up. To keep, you have to beat the dominant heights, including Barsaya. If the Turkish group has a powerful artillery fist, heavy armored vehicles and aviation support, the task is rather difficult. But doable, the experience is. In the course of Operation Euphrates Shield, Kurdish forces were able to successfully defeat the SSA positions taken by them from the SSA militants several times. So, in August, the 2016 in the battles in the area of ​​Jerablus, the Kurds threw back the "green infantry", even supported by tanks. The fire of the Kornet ATGM even managed to destroy several M60 of the Turkish armed forces.

It was thanks to the strong defense that the Kurdish forces were then able to stop the attack on Manbij. True, the situation was saved by US intervention. It is possible that the leaders of YPG are counting on the same development of events. To bind the Turkish group with stubborn battles in the hope that Washington will demand that Ankara stop, as it was in August of 2016.

It should be noted that at the tactical level the Turkish group acts slowly. Before the start of the offensive, Kurdish positions are handled by artillery and aircraft. And only then tanks and “green infantry” (detachments of the SSA) come into play. This is not done by chance. Kurdish positions are saturated with anti-tank weapons. Already in the first days of the “Olive Branch”, American anti-tank systems Javelin, European Milan and even German anti-tank grenade launchers Panzerfaust appeared on video and photos from the battlefield.

Therefore, before the start of the operation, the Turkish military had developed a tactic to combat the Kurdish “faunters”: the positions found were subjected to continuous artillery fire, and under its cover, SSA troops began to gradually approach the positions of the Kurds. When the "green infantry" takes a comfortable position, Turkish tanks begin to move. Armored vehicles open fire with the maximum distance provided by their fire control system. Tanks are approaching, and the SSA fighters go to the assault. 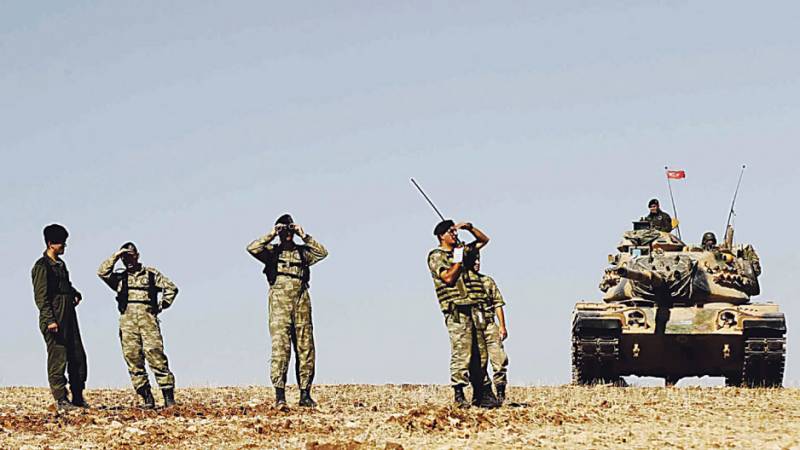 Such tactics nullify the superiority of the YPG in anti-tank weapons. True, the Kurds often prefer not to get involved in the battle and withdraw as soon as the shelling begins. But the Turkish military are trying to get around the Kurdish positions in advance and put barriers in the way of their withdrawal. However, this tactical technique is not always effective - the Kurds often knock down the barriers of the "green infantry". It was during this collision that two Turkish special forces recently died.

At present, Ankara has officially recognized the loss of only two military personnel of the 1 commando brigade. Photos of their bodies were published by Kurdish information resources. The statements of YPG about numerous Turkish losses and the destruction of armored vehicles have not yet been confirmed. In particular, January 27 reported a downed Turkish helicopter. But it soon became known: there is no question of the death of the car - the attack helicopter T-129 ATAK (a joint development of the concern AgustaWestland and the Turkish Aircraft Building Corporation) came under fire from the ground. Judging by the video published by the Kurds, the crew of the T-129 did not even understand that they were firing at him. The machine continued to iron the Kurdish detachments that were withdrawn from positions.

"Green infantry" lucky much less. The exact losses among the soldiers of the Free Syrian Army are not yet known, but the numbers are already double-digit. However, this is not surprising: the SSA performs the most complex tasks — it takes Kurdish positions by storm and stands in barriers.

It is not yet clear what losses the YPG detachments have suffered since the start of the Olive Branch. The Turkish military and the propagandists of the SSA talk about hundreds of dead. January 27 The Turkish Ministry of Defense reported the destruction of 552 Kurdish militants. Surely the figure is greatly overestimated, but the losses of the Kurds clearly exceed those of their main enemy - the SSA detachments.

The pace is not important

Why are the Turkish military acting so slowly? The answer is obvious: their task is to maximally clear the enemy from the territory along their border, physically destroy the maximum number of enemy personnel and knock out their equipment. Rather, this kind of work does not resemble decisive throws in the style of Manstein and Guderian, but rather a fight against zombies in the book of Max Brooks, World War Z. In the book, the troops went very slowly, constantly stopping to clear the whole neighborhood from the zombies.

Ankara is well aware that by occupying settlements in Afrin, it will not be possible to break up the YPG units. Yes, the activity of the enemy will be reduced, but the Kurds and their anti-tank weapons will not go anywhere. In order to keep cities and towns, garrisons will be required, which means you need to control the roads, constantly patrol. It is impossible to give everything to the “green infantry”, the level of training and discipline of the SSA units are very low. Therefore, in Afrin will have to keep the Turkish contingent. But this development of the situation does not suit Ankara.

Therefore, the Turkish military are trying not to occupy the territory, but to maximally tie up the enemy with battles and inflict maximum losses on him. The main thing is to knock out the Kurds with a rich military experience and break the back of YPG.

What can the Kurds oppose to Turkish plans? As already mentioned, they have only one option: to conduct decisive battles and hope for diplomatic support from the United States and the United Nations. But surprisingly, such a scenario at hand and Ankara. You want to want the Kurds, but you have to go into battle, demonstrate determination and the will to win, and suffer losses accordingly.

How will the Olive Branch affect the situation in Syria? Let's start with the fact that even before the beginning of the civil war, the Kurds already had their armed formations, as well as unofficial bodies of local self-government, which little listened to the government of Bashar al-Assad. Therefore, with the beginning of the confrontation, the Kurdish troops quickly destroyed the Syrian government bodies and in fact created their own state.

Why did this happen? The reason was the war in Iraq, launched in US 2003. Syria from nearby countries poured a stream of militants who were eager to fight with the Americans. They moved along three main routes that converged at Deir ez-Zor. The first through Lebanon and Damascus, and the other two - through the Turkish border and the territory of the Kurds. In order not to let militants into Iraq, the Pentagon and the CIA began to secretly form groups of Syrians and Kurds that would hunt for “transit countries”. It was these detachments that later developed (not without the support of the United States) into armed formations. Then the authorities were formed on their base. We must not forget that since 1991, the Kurds have taken the most pro-American position in the Middle East region: in 2003, it was they who became the force that, with the help of green berets, defeated Iraqi forces in the north of the country.

Ankara is clearly not planning to leave its military contingent in Syria. The question remains: how will Turkey behave after the end of the operation? Perhaps, the liberated territory will be transferred to the SSA. But it is possible that Turkey, Russia, Syria and Iran will come to an agreement and a demilitarized zone will appear in Afrin. But for now, the main events of the Olive Branch are ahead.

Ctrl Enter
Noticed oshЫbku Highlight text and press. Ctrl + Enter
We are
A great interview with Sergey Lavrov: about Ukraine, Obama and IranWhat you didn't want to know about England
9 comments
Information
Dear reader, to leave comments on the publication, you must to register.