Turkish aircraft for advanced training of pilots made the first flight


The development of the Hurkus family of aircraft has been going on since 2006. The first flight of the training version of the aircraft - Hurkus-A - took place in August 2013. This aircraft is designed for light civil aviation, as well as for the initial training of pilots. Last year, the aircraft successfully passed certification. 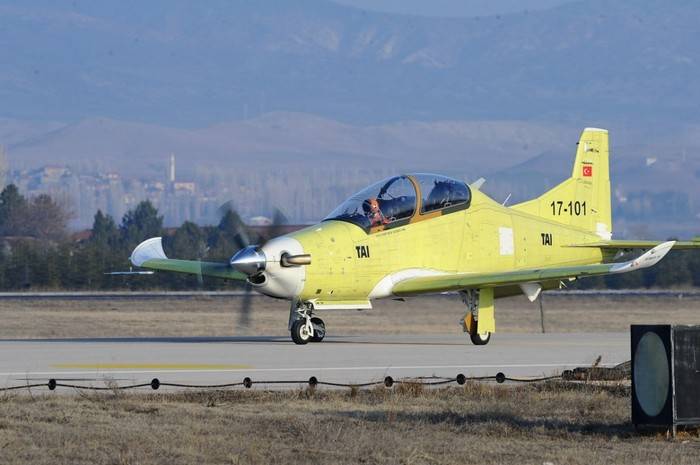 Hurkus-A is equipped with a PT6A-68T turboprop engine with a power of thousands of horsepower 1,6. The aircraft is capable of speeding up to 574 kilometers per hour and flying at altitudes up to 10,6 thousands of meters. The new Hurkus-B is made on the basis of a training aircraft of initial training, but received exclusively military systems, as well as a dashboard similar to jet aircraft.

Version Hurkus-B has a hundred kilograms less weight than the previous aircraft. In general, according to the company-developer, the new aircraft turned out to be more maneuverable. This version of the training aircraft will be delivered only to the troops. Details about the first flight of Hurkus-B are not disclosed.

In addition to versions A and B, the Hurkus family of aircraft will be replenished with versions C and CG. The first is an assault aircraft, which was demonstrated in February 2017. The CG version is a combat aircraft for the coast guard service.

In November last year, it became known that the company Turkish Aerospace Industries will develop a jet version of the turboprop training aircraft Hurkus. New development called Hurjet. As expected, the preliminary draft design of the aircraft will begin in the near future.

As expected, the jet Hurjet will be able to reach speeds up to 1,2 Mach numbers (about 1,5 thousands of kilometers per hour) and fly at altitudes up to 13,7 thousands of meters. According to pre-approved plans, the new aircraft will make the first flight in 2022. In service with Hurjet will have to replace outdated training aircraft T-38 Talon, reports "N + 1"