January 24 2018
3
The breakthrough of the sabotage and reconnaissance group of a conditional enemy to the Khalino airfield was blocked by a special forces unit during an exercise in the Kursk region, reports press office Western District. 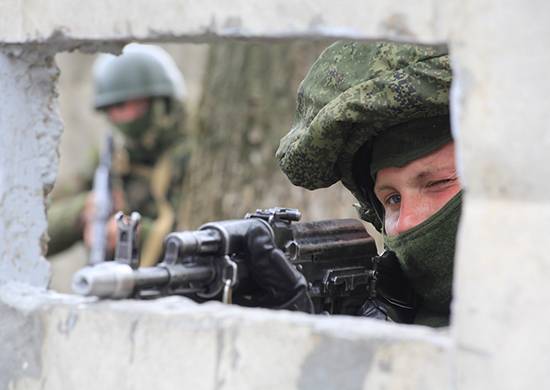 The enemy’s goal was to destroy the runways and aviation techniques.

It is reported that "previously deployed from the Tambov region military personnel of a separate special-purpose unit took reserve aerodromes under protection, where the MiG-29MT and Su-30MM fighters were redeployed according to the flight tactical exercise plan."

Applying the Strelets reconnaissance, control and communications complexes, the close-range stations of the SBR “Fara” special forces uncovered the movement of the “saboteurs” and engaged them in battle. Targets were hit at distances to 700 by fire sniper pairs using SSS rifles, Kord heavy machine guns and an armored personnel carrier fire complex,
says release.

The tasks of patrolling the area, arranging ambushes and “secrets”, making raids and capturing prisoners were also worked out.

Ctrl Enter
Noticed oshЫbku Highlight text and press. Ctrl + Enter
We are
Machine guns "CORD": new samples of the famous familyWeekly summary (14-20 of October) on the military and social situation in the DPR and LPR from the Mage military officer
3 comments
Information
Dear reader, to leave comments on the publication, you must to register.