January 26 2018
120
The 6 Rifle Regiment of the 2 Rifle Division is one of the best rifle regiments of the Russian Imperial Army. Part of the glory of the glory was the participation in Lutsk 1916 breakthrough.


Let's look at the picture of the regiment's participation in this historic offensive, based on the combat documents of the unit.

On May 22, in 4 hours, artillery, bombers and mortars opened heavy fire - it lasted most intensively until 10 hours. The fire was also fired on the whole day of 22 on May and on the night of 23 on May. 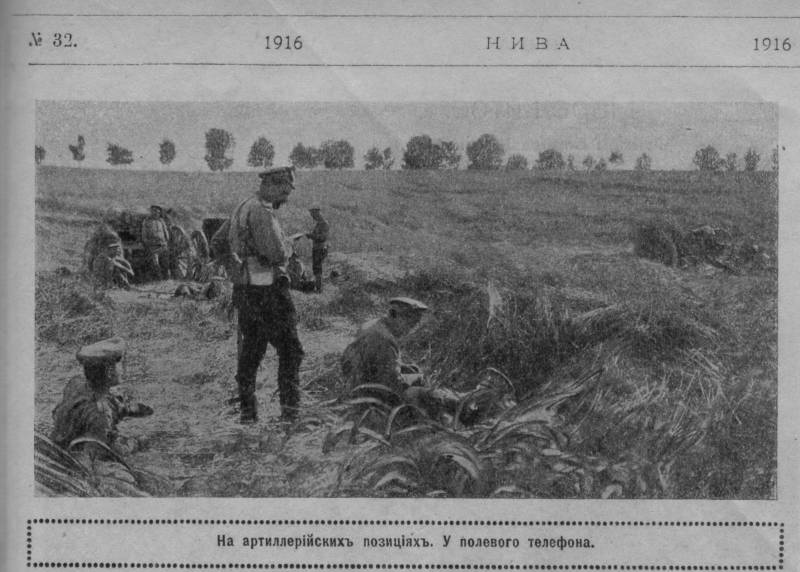 With well-aimed Russian artillery fire, by 16, the 22 watch in May destroyed a wire fence in front of the first line of enemy trenches. The enemy moved to the second line of his trenches, leaving in the first line of small groups of soldiers with machine guns. 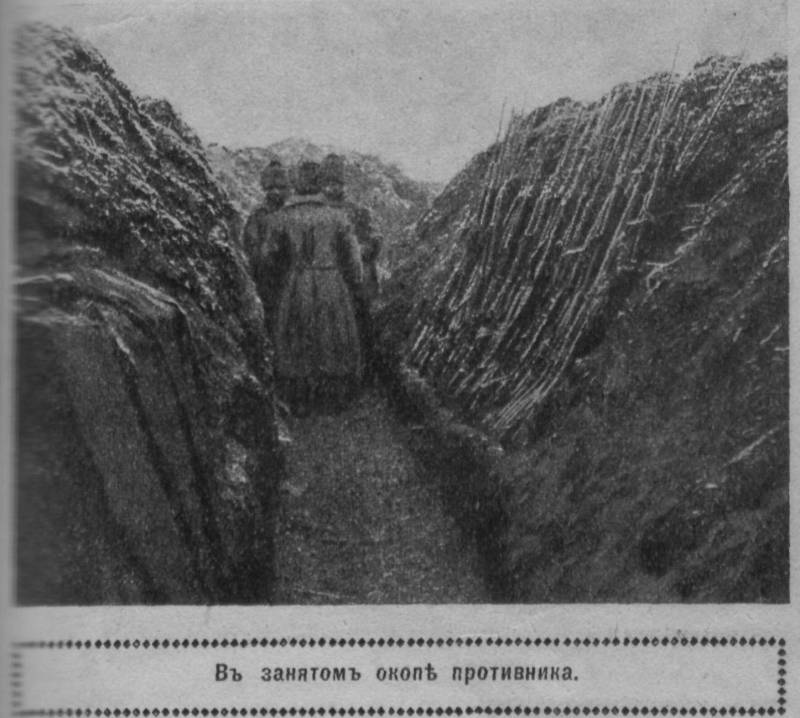 Throughout the night, artillery and artillery fire prevented the enemy from restoring destroyed artificial obstacles (only in some areas he managed to throw out the slingshots - but in the morning of May 23 they were pulled down by artillery).

On the morning of May 23, artillery, bombers and mortars again opened heavy fire at the first lines of the trenches and enemy barriers, which lasted until 9 in the morning - an hour of infantry attack.

Exactly in 9 hours, the first line (wave) of Russian shooters jumped out of the trenches, and after it, a minute later, the second. Their seats were immediately taken by the 3 and 4 waves. The latter were ordered to support the first - depending on the situation.

Simultaneously with the appearance of Russian fighters on the parapet, the gunners moved their fire to the third and fourth lines of the Austrian trenches. The first and second rifle waves swiftly attacked and captured the first line of enemy trenches. The 4 battalion companies, without stopping on the first, second, third and fourth lines of the trenches, immediately took up a position ahead of the fourth line of the enemy - moving swiftly and sweeping away everything in their path. 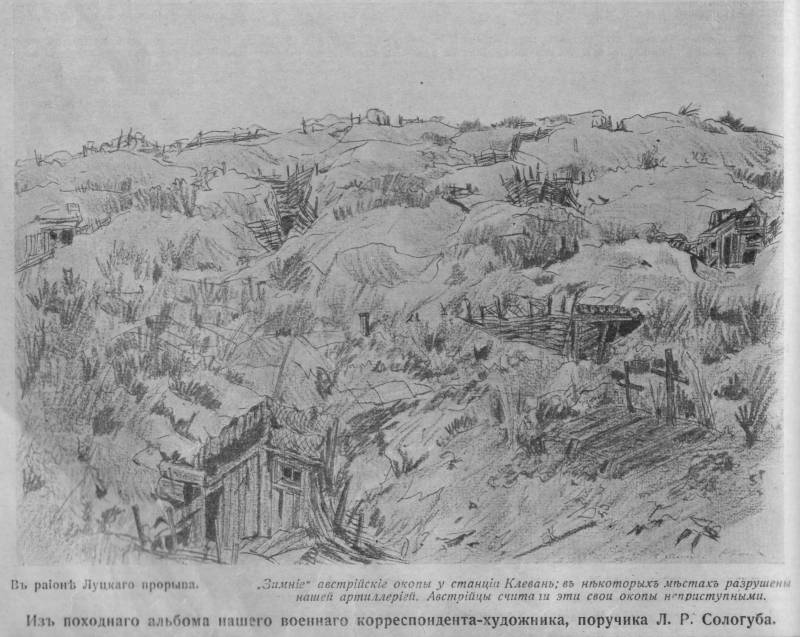 At 16 hours, the 1 Battalion received an order to support the attack of the 4 Division by attacking the enemy’s left flank. Fulfilling this order, the 3 Company and the Half Company 1 Company attacked the enemy in the rear and captured the 15 officers, the 400 of the lower ranks and the 1 machine gun. After this attack, the enemy, who was keeping himself in the forward trenches, despite the breakthrough of the 6 Infantry Regiment, rushed back and, pursued by the 4 Division and the shooters, began a disorderly retreat. The Austrians began to surrender in masses. 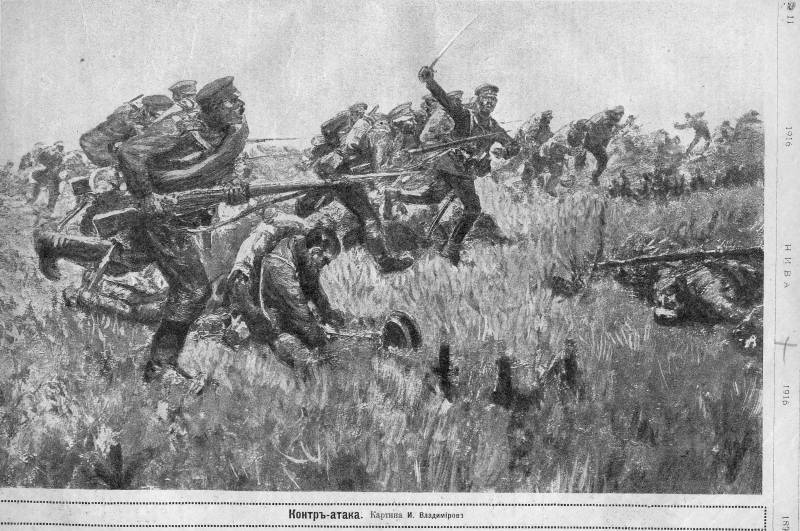 The other half-company of the 1-th company, acting to the left of the 3-th and 4-th battalions, together with the companies of these battalions, rejected the enemy, covering the artillery battery. And the enemy battery (it was written about it above) was re-captured by half-men of the 1-th company, 10-th and 16-th companies. Having occupied the height southeast of Pokashevskaya grove, the regiment began to dig in — it was necessary to secure the occupied space behind it.

In the battle 23 th May at the places. Olyki 6 Rifle Regiment captured 6 guns, 6 machine guns, 2 mortar, 2 bomb bomb and many prisoners - 33 officer and 1473 lower ranks, as well as projectiles, engineering property, etc.

The next day, the regiment pursued the enemy, moving west - through the village. Pokashevo, Khorlupy and Romanovo. Reaching der. Kopche, the arrows stopped for the night, setting up the 3 battalion and the reconnaissance team on the der. Poddubtse.

Having received the order to pursue the enemy in the north-west direction, following through dd. Poddubtsy, Vorokhov, colony of the Bush, on the 25 of May at dawn the regiment continued the offensive.

At 6 in the morning hours, the 1 th battalion, marching in the vanguard, cramping enemy cavalry and guards, met with resistance from the enemy on the der line. Borukhovo, Cherry. The enemy took a position and dug in.

Having advanced under a hurricane rifle, machine-gun and artillery fire to a distance of 200 - 300 steps and having advanced a company of 2 battalion and a reconnaissance squad to extend the left flank of the enemy, the 1 battalion went on the attack. The enemy tried to stop the attackers with fierce fire - but an energetic attack of the seven companies and scout teams put him to flight. The company, which advanced to attack the left flank, attacked the enemy from the rear - this finally broke his tenacity, and he almost entirely in the 6 section, then the rifle regiment surrendered. In total, 16 officers and 953 lower ranks were captured in this battle, one machine gun was captured, a lot of telephone equipment, weapons and cartridges. The battlefield was littered with dead and wounded Austrians. In pursuit of the remnants of the broken enemy and passing der. Borukhovo, the regiment stopped and put itself in order, and then continued to move in a westerly direction - to the colony Gushcha. 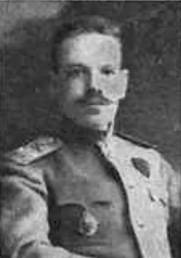 Colonel Ivanov Ivan Vasilyevich. Commander of the 6 Rifle Regiment, holder of the Orders of St. George of the 4 degree, St. Vladimir of the 3 degree with swords and St. George weapons.

Under the strong rifle and artillery fire of the enemy, the regiment's chains, supported by the 2 battery of the 6 rifle artillery division, crawled to the enemy fortified positions to the distance of 300 steps, and rushed into the attack, picked up by other parts and reserves. After a few minutes, the companies of the 1 Battalion broke through the wire fence and, knocking over the defenders of the fortifications, captured the latter. Following the battalion that broke through 1, the rest of the battalions of the regiment rushed. The 1 and 2 battalions captured 4 officers, 423 lower ranks and 1 machine guns.

After this breakthrough, the Austrians in the whole area have a stake. Teremno backed away - to Lutsk. Two artillery harnesses rushed along the Lutsky Highway, but without guns abandoned by the enemy. The 1 and 2 battalions pursuing him opened fire with machine guns and fired at them, which further exacerbated the panic.

The 3 and 4 battalions, having crossed 5 25 hours on May on the left bank of the r. Styr, began to push the enemy from the city of Lutsk in the north-west direction. The Austrians tried to stay in the city - to destroy their warehouses.

The commander of a left-flank 10 company, warrant officer Kalashnikov, noticing in the outskirts of Lutsk with. The Red, burning, large quartermaster warehouse, on its own initiative, rushed along with the company in a village. Red and interrupted both the arsonists and the Austrians who were guarding the warehouse. Having taken possession of the warehouse, the 10-i company and several scouts of the 4-nd division began to extinguish the fire, and then, leaving the man with the ensign at the 30 guard, the company continued to follow the battalion.

The 6 regiment in the morning 8 was ordered, acting on the enemy's flank, to facilitate the crossing of the 8 and 7 rifle regiments. To accomplish this task, the 6 th regiment was given two battalions: one from the 8 th, and one from the 7 th rifle regiment. The battalions, having crossed the bridge, moved forward, and under their onslaught the enemy began to retreat. Around 700, the man surrendered to the battalion of the 8 Infantry Regiment.

The 6 th infantry regiment was at the forefront of the Lutsk breakthrough - being the flagship of its combat sector. The losses and trophies of the regiment speak of the skillful action of the unit and the courage and heroism of the officers and shooters. During the period of the battles from 22 on May to 2 on June 1916, the losses were: 4 officer and 128 lower ranks killed, 15 officers and 1267 lower ranks. The trophies for the same period: 53 officer and 3024 captives in the ranks of the healthy and 3 officer and 214 in the lower ranks of the wounded, as well as 6 guns, 7 charging boxes, 8 machine guns, 2 bomb, 2 mortar, 1 flamethrowers, I went to the table, and I went to the table. , ammunition and engineering property. 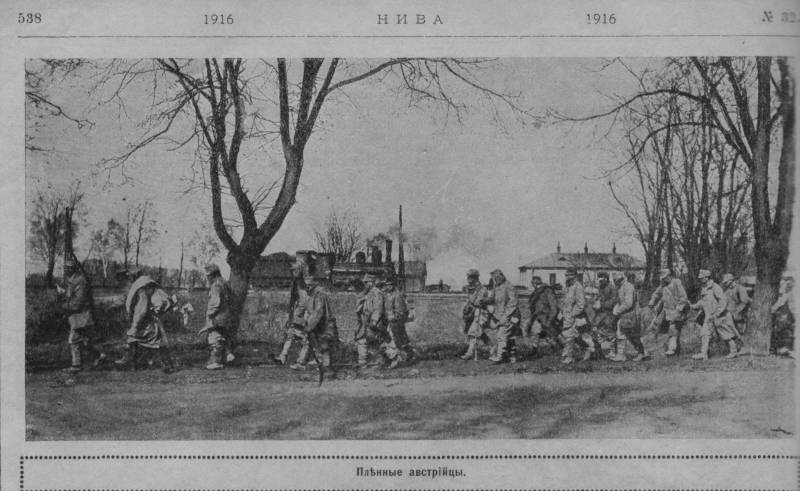