The genius of Kurchatov protected the country from nuclear aggression 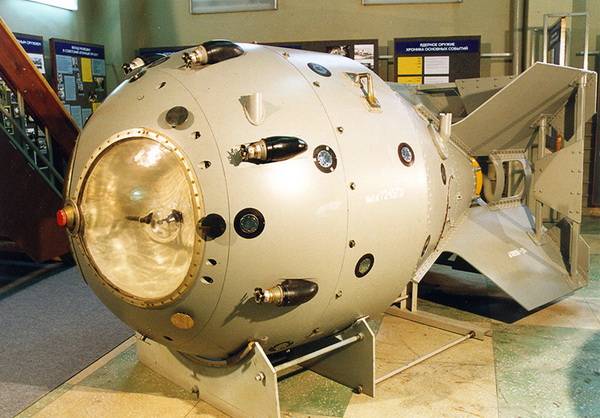 The layout of the first Soviet atomic bomb "RDS-1".


Sometimes there are such coincidences in life that it only remains to think about it - is it a coincidence? 12 January 1903 was born in the city of Sime, Ufa Province, the future academician Igor Vasilyevich Kurchatov (1903 – 1960), three times Hero of Socialist Labor, scientific director of the Soviet atomic project was born. And on January 12, 1907, in Zhytomyr, the future academician Sergey Pavlovich Korolev (1907 – 1966), twice Hero of Socialist Labor, head of Soviet rocket works, was born.

The creation of the Soviet nuclear missile shield is closely linked with these two names. Under the leadership of Kurchatov, the first atomic and hydrogen bombs were created, and under the leadership of Korolev, the G-7 was developed - the intercontinental ballistic missile P-7. But this is no coincidence, but the logic of the era explains the fact that two outstanding sons of Russia worked in the same team, taking the threat of US atomic bombings from the Motherland and laying the foundations for guaranteed restraint of aggression against Russia.

Moreover, the figure of Kurchatov personifies the elimination of the US atomic monopoly.

Kurchatov became the head of the atomic project from the very first days of its inception - from 1943, but the whole previous biography of the scientist led him to this and was a preparation for the main business of life - turning the Soviet Union into a great nuclear power. 5 March 1938, a group of leading members of the Leningrad Physical and Technical Institute of the USSR People's Commissariat of Mechanical Engineering sent the Chairman of the USSR Council of People's Commissars V.M. A letter to Molotov, which began with the words: “Dear Vyacheslav Mikhailovich! The scientists of the Leningrad Physical-Technical Institute appeal to you with a request to help resolve the issue of great importance to Soviet science. It is about the development of research in the field of the structure of the atomic nucleus and the technical basis of these works ... "
Scientists wrote about the need to build a cyclotron in the USSR (there were five of them in the USA, they were built in England and France), and the questions posed convincingly testified that Russian science is acquiring first-class qualities, reaching the world level. Among those who signed the letter were such future luminaries of Soviet atomic physics as A. Alikhanov, D. Skobeltsin, L. Artsimovich, A. Alikhanyan, B. Dzhelepov, J. Frenkel, but the second — immediately after the signature of the LPTI director Academician A. Ioffe — stood signature of Igor Kurchatov. And - by right. By that time, Kurchatov had fully manifested himself in both of his guises: a prominent scientist and a promising organizer of scientific work.

After the start of the war, Kurchatov was seconded to the active fleet, where in 1941 – 1942 he carried out work to protect ships from magnetic mines, being also a scientific consultant to the General Directorate of Naval Shipbuilding. And 10 March 1943, he is appointed head of a special laboratory number 2 - the germinal structure of all Soviet atomic work. It was not just a good, but an unmistakably right choice. Back in 1940, the “Joffe’s dad” offered to lay the leadership of the emerging uranium problem on Kurchatov’s 38-year-old “as the best expert on the issue”.

Much has been written about Kurchatov, but I will cite an excerpt from the preface of the well-known physicist and gunsmith of the Hero of Socialist Labor Lev Feoktistov to the first volume of the Atomic Project of the USSR collection of documents and materials edited by L. D. Ryabeva: “About I.V. Kurchatov is often referred to as the organizer of science and the nuclear industry. This is something unsaid. Kurchatov is first and foremost an eminent scientist, on whom the country has entrusted a great mission. Read his numerous letters to the government, reports, appeals to intelligence, and in front of you there is an image of a man who, even then, at the very early stage, understood everything and very clearly formulated it. It was the responsibility of the choice (then far from unequivocal) of the shortest path that leads to the goal, which was imposed on him and on no one else. ”

Time really was the deciding factor. The atomic bombings of Hiroshima and Nagasaki in August 1945, and the US “atomic” blackmail policy generated by their success, clearly showed that the Soviet cities could already wait if Russia did not acquire its own nuclear shield and sword of retaliation as soon as possible. The atomic project of the USSR was a collective feat of millions of people, one way or another connected with it, but the work of its supervisor was also a feat - not only scientific, but also civil. The key to ensuring success was the creation of the production of a “product” - weapons-grade plutonium. Kurchatov carried out the general scientific management of atomic works and was also the scientific director of the plutonium combine No. 817 in the Urals. 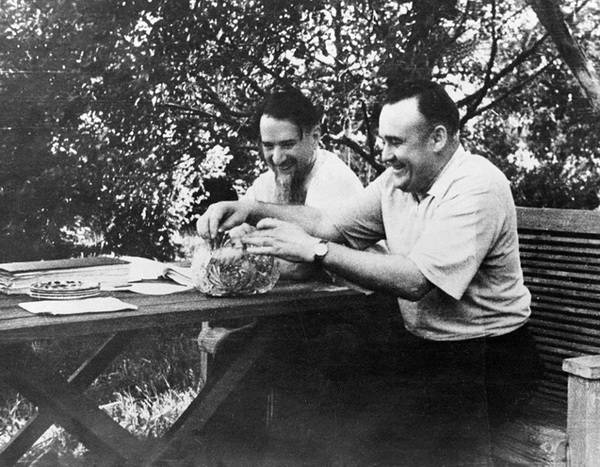 And this is what 24 of June 1948 reported to the Vice-Chairman of the Council of Ministers of the USSR Comrade Beria L.P. - to the curator of the atomic project and the chairman of the Special Committee - authorized by the USSR Council of Ministers at plant No. 817, General I.M. Tkachenko: “Academician Kurchatov I.V. sometimes ignores all safety rules and precautions (especially when something goes wrong) ... Comrade EP Slavsky (the chief engineer of the plant, later the MSM minister, three times Hero of Socialist Labor. - S. B.) behaves even more imprudently. So, 21 Jun. Comrade Kurchatov descended on the elevator to the minus 21 meter in the moisture alarm room at the time when his activity was over the 150 permissible doses. The security guards of the Ministry of State Security attached to it, without being instructed in this regard, and the staff of the radiometric service, bowing before his authority, did not interfere with Comrade. Kurchatov ... Since his visits to the infected places are not caused by any necessity, I personally asked Comrade. Kurchatov to be more cautious in the future ... I ask your instructions ... "

And Beria personally and strictly warned the "violators" - in the name of their own health. But Kurchatov did not protect himself. In 1949, the first Soviet atomic bomb, RDS-1, was successfully tested, in 1953, the first hydrogen bomb, RDS-6, and in 1960, the atomic industry lost its living legend, Kurchatov, who is so well known to Beard. Igor Vasilyevich died on February 7 in Barvikha, during a quiet conversation on a one-on-one bench with Yuli Borisovich Khariton - Arzamas-16 scientific adviser. More 12 January, they together celebrated the fifty-seventh birthday of Igor Vasilyevich, and less than a month later Kurchatov was gone. In the 1959 year, he spoke at the XXI Congress of the CPSU and, as if summing up the results of the test “session” of the 1958, said: “The Soviet Army received an even more powerful, more advanced, more reliable, more compact and cheaper weapon". But from now on Igor Vasilyevich could no longer realize his plans, and not only in the sphere of defense. His performance in England in 1956 about the work in the USSR on controlled thermonuclear fusion caused a sensation far beyond the scientific community.

The unexpected death of Kurchatov has become a huge loss for all nuclear scientists, both professional and personal. Much later, the prominent Soviet designer of nuclear weapons, Professor D.A. Fishman, Hero of Socialist Labor, to whom Igor Vasilyevich presented the Lenin Prize in 1959, wrote: “No, Igor Vasilyevich is remembered not through household and other trifles, but above all with his enormity in everything: as the greatest scientist, as a Citizen and Man ... Unprecedented purposefulness , the scale and clarity of thinking, special insight, demanding of oneself and others, the ability to listen and speak aptly, confidently and convincingly created an exclusively creative atmosphere subordinating and mobilizing everyone around him to solve the most difficult and puzzling tasks. Igor Vasilievich knew how to captivate like no other and therefore became the undisputed leader with unquestioned authority at all levels ... A captivating intelligent half-open smile, a sparkling and inquisitive look, an original beard made his entire appearance incredibly soulful and beautiful, making him unwittingly admire him even during the most serious conversations . And the conversations that he often led directly in the workplace were of such a nature that a feeling of camaraderie was created, as if someone came to consult you or advise in a good way. ”

If you look at the fate of Kurchatov not through the prism of awards and posts, but in essence, it becomes clear that all the years of his conscious life were for him, above all, years of continuously increasing responsibility and pressure. The awards were only derived from this load, the natural result of tremendous efforts, the crown of which was the security of the Motherland, guaranteed to be protected by a nuclear shield.

Ctrl Enter
Noticed oshЫbku Highlight text and press. Ctrl + Enter
We are
Chernobyl notebook. Part of 3Overbomb
10 comments
Information
Dear reader, to leave comments on the publication, you must to register.