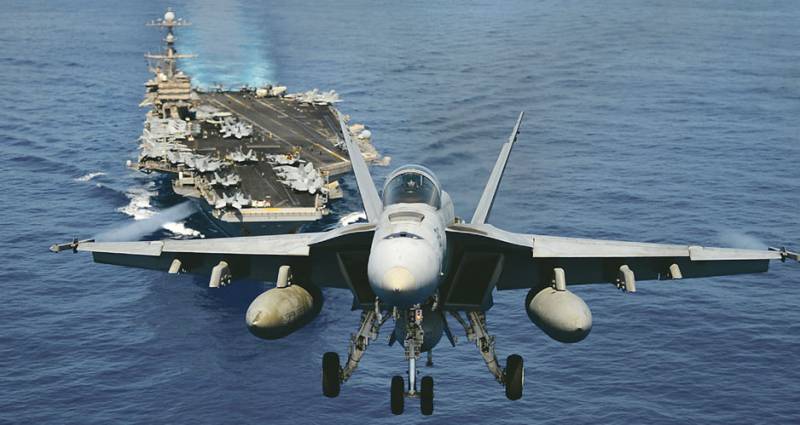 The strategy of the American administration, promulgated by Donald Trump on the eve of the New Year, at first glance is not so much a doctrine intended for implementation as a propaganda document. The spirit of the slogan “America is above all” literally permeates all sections.

However, this is only the outer shell. In essence, the document is aimed at solving a much wider range of tasks to preserve America’s leadership in the world. The strategy says openly: “We must convince opponents of our ability and readiness to defeat them and defeat them in the event of an attack on the US, and not just punish them for such an attack.” Thus, an application was made for preparation for a total confrontation.

War in the new edition

The idea of ​​total war is not new. Trying to understand the nature of the military revolution of the turn of the 18th and 19th centuries, the eminent German theorist K. Clausewitz made the first distinction between limited and total war.

She, in his opinion, has two kinds. “The dual type of war is manifested, firstly, in cases where the goal is to completely defeat the enemy, with the intention either to destroy him politically, or only to disarm in order to force him to accept any peace conditions; secondly, when the goal is limited to certain conquests in order to leave them behind or to use them in the form of an exchange item during peace negotiations. ” Clausewitz gives preference to the first species, the most decisive, fully responsive and philosophical understanding of war, but considers both species with all their intermediate degrees.

He divided wars into total and limited ones not by the criterion of the scale of hostilities, captured territories or the number of dead, but by what should be understood by “victory”, which is its measure, the ultimate goal. In this context, the ultimate goal of a limited war is to force a favorable compromise, and the total goal is to destroy the enemy as a political entity. In the first case, the measure of victory is the conclusion of a deal that is more advantageous for the winner and less successful for the defeated, in the second - the surrender of the enemy.

The new US strategy is focused on preparing for the destruction of the enemy as a political subject and its complete surrender, that is, it is based on the idea of ​​total war. Fitted with this far from new idea, the analysis is ominous: “The most serious threat to the United States is the Russian nuclear potential.” Such ideas have been repeatedly forwarded by Americans during the days of the classic cold war, but today they are acquiring a new reality.

The authors of the strategy plan a wide range of actions against primarily Russia and China. The main thesis of the document: Moscow and Beijing entered an era of rivalry with the United States, trying to select "geopolitical advantages and change the international order in their favor", make "their economies less free, less fair, increase military spending, control information to suppress their societies and expand own influence. "

Concerned about the insufficient freedom and fairness of the economies of geopolitical rivals, the United States plans to deliver a major blow to Russia, which, as a "revanchist state," seeks to "restore the status of a great power and strengthen the sphere of influence along the borders." To this end, according to the authors of the document, Moscow uses various tactics using both military and informational influence, intervenes in the internal affairs of countries around the world, conducts information and cyber operations. The strategy faithfully lists the forces and means used for these purposes: state Russian media, users writing comments for money, exotic trolls and bots that create false profiles in social networks are not forgotten.

At the same time, the document is silent about the actions of the United States in Iraq, Afghanistan, Syria, Southeast Asia and the Balkans, making an attempt to lay the main blame for undermining international security on Moscow. The combination of ambitions with a growing military potential creates instability in Eurasia, where the risk of conflict due to incorrect calculation from the Russian side increases, it is stated in the strategy. On the continent, according to the authors of the document, Moscow is trying to drive a wedge into the transatlantic alliance of the USA and Europe, uses subversive methods to reduce America’s credibility, and weaken the EU countries and structures.

It is surprising that the authors concluded that the calculation of previous US administrations that the inclusion of Russia and China in international institutions would make them more open and loyal was not justified.

What is it about? The stake has always been on attempts to subordinate the whole world to American dictatorship and to isolate geopolitical rivals as much as possible. A few excerpts from the US National Security Strategy, promulgated in February 2015: “The United States will use military force, if necessary, and unilaterally, when our long-term interests so require. Nothing can replace America’s leadership either in the face of aggression, or in the matter of universal human values ​​or national security. ”

The only difference is that the Russian Federation in the new Strategy of the United States criticized much tougher than before. Yes, and Russia is mentioned in the text of the document ten times more often than in previous 2010 and 2015 strategies. However, the authors leave, if not the door, then a narrow gap for interaction with Moscow “in the areas of mutual interests”. In presenting the document, Trump, in particular, referred to the episode of cooperation between the CIA and the FSB, thanks to which it was possible to prevent the terrorist attack in St. Petersburg. “This is how it should work,” said the US president.

Thus, the document, in addition to the clearly propaganda component of individual passages, reflects the general mood of the United States to strengthen global leadership based on strength. The strategy recognizes the dubious honor of the authorship of the United States in introducing sophisticated subversive methods into international practice: “Our opponents studied American methods of warfare and began to create such forces and means that help to deprive us of the advantages and take advantage of our weaknesses. Our opponents and rivals have learned to act skillfully on the verge of the norms of international law, without crossing the threshold of an open military conflict. ” Therefore, the document says, “we must increase the possibilities of deterrence and intimidation, convincing opponents that they will not achieve their goals by force and other forms of aggression.” As a priority, “such systems will be developed that exceed weapon adversary in its deadly action. " This refers to the improvement of nuclear strategic and tactical forces, the deployment of missile defense, the adoption of the WTO systems. “The United States should reverse the recent decisions to reduce the size of the armed forces and increase it, while simultaneously upgrading the army and increasing combat readiness. We need a modern and sustainable forward-based system, as well as operational and mobile forces capable of operating anywhere in the world. ”

The task is to work out steps to solve the “new forms of conflict,” including economic and political aggression in the context of an “era of competition,” where the main opponents of the United States are Russia and China. “The Ministry of Defense should develop new operational plans and concepts that ensure victory without guaranteed superiority in the air, at sea, on land, in space and in cyberspace, including in the context of actions against threats that do not reach the level of open military conflict. We must develop the ability to conduct combat operations with irregular armed formations. ”

Our tactics for their strategy

In Moscow, the new US National Security Strategy was called imperialistic, demonstrating Washington’s reluctance to abandon the unipolar world. Of course, Russia cannot agree with this attitude towards our country. In Beijing, it was considered that the document was written in the spirit of the Cold War and contains “evil slander”. China will not develop at the expense of others, but it will never give up its legitimate interests, the Chinese Foreign Ministry said, adding that "cooperation is the only right choice for the United States."

Given the three main threats to American national security declared in the strategy — the ambitions of Russia and China, the danger posed by the “rogue states” of Iran and the DPRK, and international terrorism — there remains a high probability that Washington will continue its foreign policy course without significant adjustments.

Anti-Russian sanctions will be strengthened, subversive operations will be carried out, while military pressure will increase. We should expect the US to withdraw from the Treaty on the Destruction of Medium and Small-Range Missiles (INF), and to strengthen support for this initiative from NATO allies.

Non-forceful methods will be used fully against Russia, associated with targeted informational and psychological impact on the minds of ruling elites and the entire population of the country, the creation and support of partisan and other irregular formations, inflating ethnic conflicts based on organized crime and terrorist groups.

The cumulative effect of the US and NATO war preparations used by them of the subversive technologies of the hybrid war and the "color revolutions" requires urgent countermeasures.

Ctrl Enter
Noticed oshЫbku Highlight text and press. Ctrl + Enter
We are
The world we leave, the world we enter, and the world between themTheories of War
9 comments
Information
Dear reader, to leave comments on the publication, you must to register.