Before whom did Erdogan squander "AWACS"? Break Russian-Turkish relations can move into a hot phase 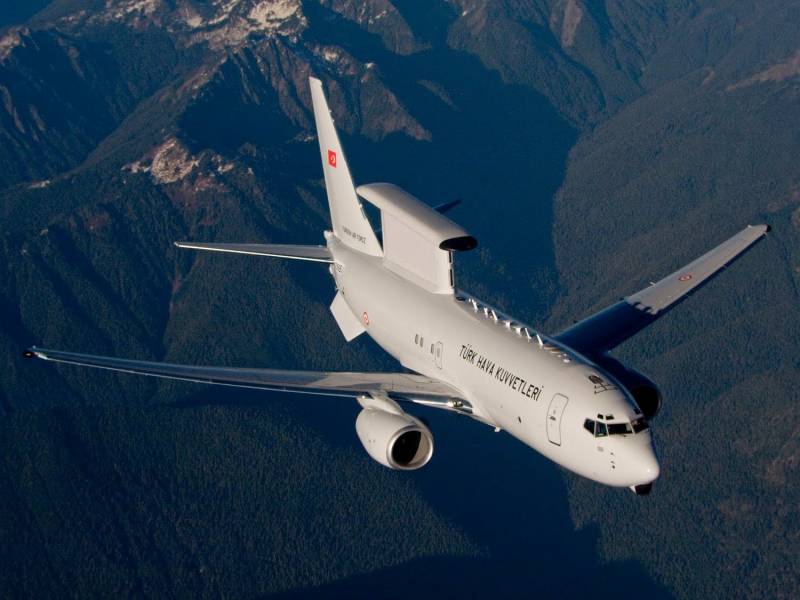 An extremely alarming scenario for the division of the territory of the Syrian Arab Republic was outlined immediately after the suppression of government forces (using tactical and strategic aviation The Russian Aerospace Forces, as well as the Russian Navy) of the last large ISIS fortified areas (IS, banned in the Russian Federation) in line with the Euphrates, as well as numerous defenders Jabhat al-Nusra and IS in the western province of Idlib. While the Syrian government forces, together with specialists from the Russian army, are doing everything possible and impossible, freeing up the strategically important Abu Duhur air base in Idlib, and also continuing to develop an offensive in the northern operational direction to close the large tactical cauldron Jebhat al-Nusra ( banned in the Russian Federation) in the provinces of Aleppo and Hama, Washington fluently forms a new army of many thousands to oppose the SAA, as well as contain territorial claims of Ankara to the lands of Rozhava (Syria Who Kurdistan).

The formation, called the New Syrian Army, will be represented by thousands of ISIL and Dzhebhat an-Nusra militants who have fled from half-hens, as well as representatives of the Kurdish Syrian Democratic Forces, who are armed with fairly modern small arms and anti-tank weapons, and also take wing of the US Central Command. To legally substantiate such actions, the White House and the Pentagon are already planning to deploy an impressive diplomatic corps in Rakka and Hasek this year. It turns out that the statements made by Russian President Vladimir Putin at the end of the APEC summit, as well as by UAR President Bashar Asad after the withdrawal of a part of the Russian military contingent from Avb Hamim and other military facilities in the country, unfortunately, do not quite correspond to reality. Recall that in their December statements, the leaders of the states noted that thanks to the operational actions of the Russian Aerospace Forces and the CAA, they managed to save Syria’s territory. In reality, only about half of the territory today is under the control of the army of Bashar al-Assad; the rest is firmly assigned to the pro-American SDFs (around 25-30% of the territory), rebels from the pro-Turkish “Syrian Free Army” and “moderate opposition” in the provinces of Aleppo, Idlib, Darya and Homs (around 20% of the territory, including the US Marine Corps under control 55-kilometer safety zone on the Jordan-Syrian border).

The most difficult and unpredictable situation today is around the Kurdish canton of Afrin, which is actually a large tactical cauldron of the Kurdish YPG detachments, separated from the Rozhava by a large enclave subordinated to Ankara "Free Syrian Army". Skillfully manipulating the fact of cardinal disagreements between the current Syrian leadership and Rozhava regarding a military-political settlement, Turkey has been trying to find arguments for a forceful cleansing of the weakened Afrikan canton, deprived of military-technical assistance from Washington and other regional Kurdish cantons (Jazir, Kobani and Shahba). Ankara’s worst nightmare today is a possible Kurdish breakthrough of the tactical “corridor” from the Manbij area towards Afrin, where the ultimate goals will be: the return of the Afrin canton to Syrian Kurdistan, as well as the likely further release of the Kurdish forces in the “New Syrian Army” to the Mediterranean coast . In the current situation, only the possession of the port infrastructure can help Rozhava to build more or less stable trade and economic relations with Western countries, and for the Americans to export tens and hundreds of thousands of barrels of oil from the Al-Omar oil field). But in the above breakout attempt there is an important feature.

The catch is that to reach the Mediterranean coast, the Kurds in the SDF and the New Syrian Army need to attack not only through the northern part of the Idlib governorate controlled by the SSA and regular units of the Turkish army, but also through the 13,5 km section of the province Latakia, controlled by the Syrian government forces. The implementation of such a plan absolutely does not suit either Moscow or Damascus, since this will ensure the full development of the Rozhava as a powerful regional player with the support of Washington. It is on these "strings" that Erdogan is trying to play, preparing the operational and tactical base for stripping the canton of Afrin. Also, the Turkish president is trying to play on the moment that the States continue to supply the Kurdish SDF with a new large batch of TOW-2B anti-tank missile systems and other weapons that can later be used against the Syrian armed forces on the west coast of the Euphrates. At the same time, the sweep Afrin is brought under the operation “Euphrates Shield”, which was started earlier.

In early January 2018, the operational situation in the vicinity of the canton became noticeably aggravated. A few days before Recep Erdogan’s loud statements about the preparation of an offensive “backbone” for the attack on Afrin, the Turkish Armed Forces ordered the transfer to the territory of the friendly enclave of the “Free Syrian Army” (FSA) in the province of Aleppo ( Aleppo batteries of the Improved Hawk anti-aircraft missile system, photographs of the elements of which were published on the Turkish and Western Internet in early January. Only one assumption can be made on this score: the “I-Hawk” complex is deployed exclusively for the “muscle game” demonstration purpose. The whole "trick" here is that the YPG / YPJ units do not have manned tactical aircraft and cruise missiles that could become targets for the Hawk, and the territorial reconnaissance unmanned aerial vehicles are capable of flying at low-altitude lines (less than 30 m), which are inaccessible to the I-Hawk anti-aircraft missile system due to the imperfection of the parabolic radar station for illumination of AN / MPQ-46 targets, as well as the semi-active radar guidance system of the MIM-23B SAM system, which has a low interference immunity Reflections of a centimeter ray of illumination from the earth / water surface.

Even if we take into account the fact that the support of the Kurdish National Self-Defense Detachment will be provided by the “New Syrian Army” under the cover of tactical aviation of the US Navy and Air Force operating at low (45-150) and medium (4-7 km) altitudes “Improved Hawk” missile complex will be in such a collision a loser, since the AN / MPQ-46 target illumination radar can “capture” only one air target, while a massed rocket-air strike involves the use of several dozen strategic / tactical wings. missiles RGM-109E «Tomahawk Block IV» type and / or AGM-158B «JASSM-ER». Even an anti-aircraft missile regiment of several “I-Hawk” complexes cannot cope with such a large number of air objects. Another important technological feature is that the sensitivity of the semi-active radar homing head of the MIM-23B SAM system allows you to work on objects with EPR within 0,1-0,2 square. m, while the effective reflective surface of the “JASSM-ER” may not even reach the 0,08-0,1 square. m

If the Turkish Air Force command seriously planned a clash with YPG units in the Afrin canton or the rest of Syrian Kurdistan (with state support), not one “sickly” battery would be thrown into the territory of “moderate opposition” and SSA to the margins of the obsolete anti-aircraft missile complex "I-Hawk", and at least a few of their units for the implementation of multi-channel work on aerial targets. In addition to the transfer of the Hawks to the province of Aleppo, there was another interesting event that occurred on January 11 of the year 2018.

In particular, quite suddenly, in the airspace above the Turkish silt of Gaziantep, a flight of a Boeing 737 AEW & C Peace Eagle aircraft was recorded, which scanned the airspace over Syrian Kurdistan using a multifunctional 2-way AFAR- MESA S-band radar, which allows tracking up to 180 VCs at a distance of 350-500 km. This became known from a Western online resource / tactical news syria.live.ua.map cards with a link to the online flight monitoring portals of aircraft with transponders turned on.

The activity of whose tactical aviation was attempted to be tracked by the operators of the Peace Eagle by the Turkish Air Force is not yet known, but the already growing conflict between the pro-Turkish “Free Syrian Army” and the government forces of Syria over the territories defeated by “Dzhebhat al-Nusra” is already well visible. For example, on January 12, 2018, pro-Turkish militants of the SSA (FSA) conducted a successful local offensive "jerk" in the direction of the settlement. Al-Hiyara, beating him from the Syrian Arab Army. Moreover, SFA formations in the northern part of the province of Hama shot down our Orlan-10 UAV, which conducted reconnaissance of the Dzhebhat al-Nusra positions near the rebels. And this is a very alarming “indicator” of Erdoогan’s playing a double game.

At the same time, the remarkable situation is that the Kurdish canton of Afrin up to 11 in December 2017 was attended by units of the Russian military police that were deployed on 8 in September. They had an excellent sobering effect on Ankara, and it would not be difficult to return them to duty. Such a move would be extremely advantageous for Moscow, because the capture of the pro-Turkish so-called "moderate" Afrin promises a further rampant "moderate" pseudo-caliphate throughout the north of the SAR (up to reunion with the friendly "boiler" north of Homs). This only means that adequate interaction with the YPG troops in the canton of Afrin will make it possible to moderate the very dangerous imperial habits of Turkey with respect to the Syrian Arab Republic.

Ctrl Enter
Noticed oshЫbku Highlight text and press. Ctrl + Enter
We are
War in Turkish KurdistanRozhava - the land of the Soviets. How do Syrian Kurds fight and build a new world?
36 comments
Information
Dear reader, to leave comments on the publication, you must to register.