January 16 2018
58
ULA Corporation (United Launch Alliance) (USA), one of the most famous developers and manufacturers of space technology in the world, the joint venture Boeing and Lockheed Martin, for about 2 years, has been developing the Vulcan launch system Make the output of satellites cheaper and more accessible. It is assumed that the system will seriously compete with the reusable Falcon 9v1.1R rocket (R from the English. Reusable, reused (reused) Elon Mask).


Instead of returning the entire first stage, ULA engineers offer to return only its engines. The reuse of rocket parts is a key component of the Vulcan. In ULA, reuse is NOT in the soft landing of ALL of the first stage. Instead, it is proposed to return only a small, but the most expensive part of the stage - the engines, it is easier and cheaper. One of the leaders of the ULA on this occasion said the following: "It is not always the most difficult thing in a rocket is the most expensive."

Before the Elon Mask launches on the market, ULA was a monopolist and charged the launch price for the full program without embarrassment. With the advent of Mask, the price of launches decreased significantly (from $ 110 million to $ 60 million) and part of the launches from ULA passed to Mask, and a substantial part. For fun, it can be said that the development of the Vulcan rocket takes place under the motto of Star Wars: "The Empire Strikes Back." I read that work on the creation of reusable rockets began in ULA a long time ago, almost at the beginning of 2000's, but then stopped. They were then monopolists and it didn’t make any sense to reduce the launch cost. We must pay tribute to the Mask - drew the attention of the whole World to reusable rockets, and how!

Before continuing the story about the Vulcan rocket, I want to remind you, for those who are not in the subject, the characteristics of the first (returnable) stage to the Falcon rocket 9v1.1R and the return technology. In the first stage, the 9 Merlin 1D engines are installed, with increased thrust and specific impulse. A new type of engine received the ability to throttle from 100% to 70% and, possibly, even lower. Changed the location of the engines: instead of three rows of three engines used layout with the central engine and the location of the rest around the circumference. The central engine is also installed slightly lower than the rest. The scheme is called Octaweb, it simplifies the overall device and the process of assembling the engine compartment of the first stage. The total thrust of the engines is 5885 kN at sea level and increases to 6672 kN in vacuum, the specific impulse at sea level is 282 s, in vacuum 311 c. The nominal run time of the first stage is 180. The height of the first stage is 45,7 m, the dry mass of the stage v1.1 is around 23 t and around 26 t for (R) -modification. The mass of the placed fuel is 395 700 kg, of which 276 600 kg is liquid oxygen and 119 100 kg is kerosene. Mass of one engine Merlin 1D: 450-490 kg. The mass of 9 engines is approximately 4,5 tons, it is 17,3% of the DRY mass of the first stage. The technology and return path of the Falcon 9 v1.1R is shown in Figure. 1. 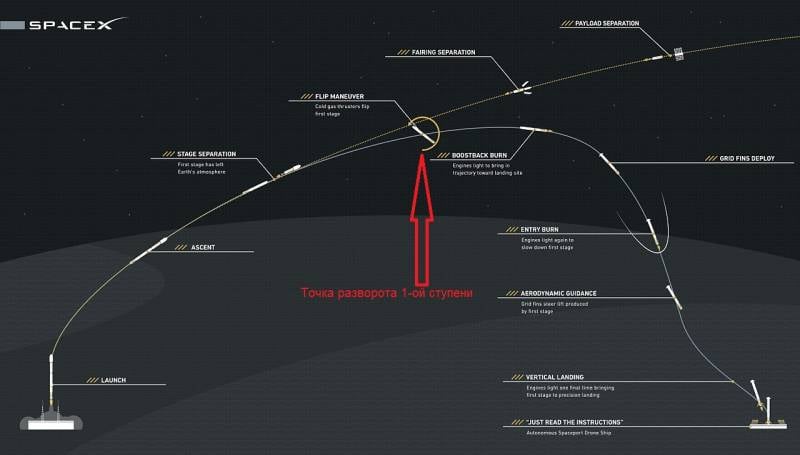 From the diagram it is clear that for the landing of the first stage on the folding supports it is necessary to turn it engines forward, i.e. turn around its axis, and for this, the Falcon 9 v1.1 needs to be supplemented with the equipment of turn and landing systems, which was done:

1. The first stage is equipped with four folding landing racks used for soft landing. The total weight of the racks reaches 2100 kg (this is almost half the weight of all 9 engines for which all this was started).
2. Navigation equipment is installed to exit the runway to the landing point (you must get exactly to the site in the OCEAN);
3. Three of the nine engines are designed for braking and received an ignition system for restarting;
4. At the top of the first stage, foldable lattice titanium steering wheels are installed to stabilize the rotation and improve controllability during the descent stage, especially at the time when the engines are turned off. The titanium handlebars are slightly longer and heavier than their aluminum predecessors, they increase the ability to control the stage, withstand high temperatures without the need for an ablative coating and can be used an unlimited number of times without inter-flight maintenance.
5. In the upper part of the step, an orientation system is installed - a set of gas nozzles that use the energy of compressed nitrogen to control the position of the step in space before the release of trellis controls. A block is located on both sides of the tread, each with 4 nozzles directed forward, backward, sideways and downward. Downward nozzles are used before three Merlin engines are launched during stage deceleration maneuvers, the produced pulse lowers the fuel into the lower part of the tanks, where it is caught by the engine pumps. The titanium grids and the gas nozzle block of the orientation system (flagged) before and after landing are shown in photo 2. The paint under the nozzles did not peel off because the energy of compressed nitrogen was used.

For landing, SpaceX leases TWO spaceports — the Air Force base at Cape Canaveral (LC-13) on the east (Atlantic) coast and Vandenberg base (SLC-4-West) on the west (Pacific) coast. Accordingly, offshore platforms are used by TWO, each of which is a converted barge. The engines and GPS equipment installed on them make it possible to deliver them to the necessary point and hold it, creating a stable landing ground, but the weather affects the possibility of a trouble-free landing. SpaceX has two such platforms, because the width of the platforms does not allow them to pass the Panama Canal from Vandenberg Base to Cape Canaveral.

The engine descent of the entire first stage reduces the MAXIMUM payload of the launch vehicle by 30 – 40%. This is due to the need to reserve a significant amount of fuel for braking and landing, as well as additional weight of landing equipment (landing supports, lattice steering wheels, a reactive control system, etc.). Let me remind you that rockets do not always start with 100% load, incomplete loading is almost always and averages from 10 to 17%.

Let us return to the story about the technology of returning engines Vulcan rocket. The landing technique is shown in the figure 3. 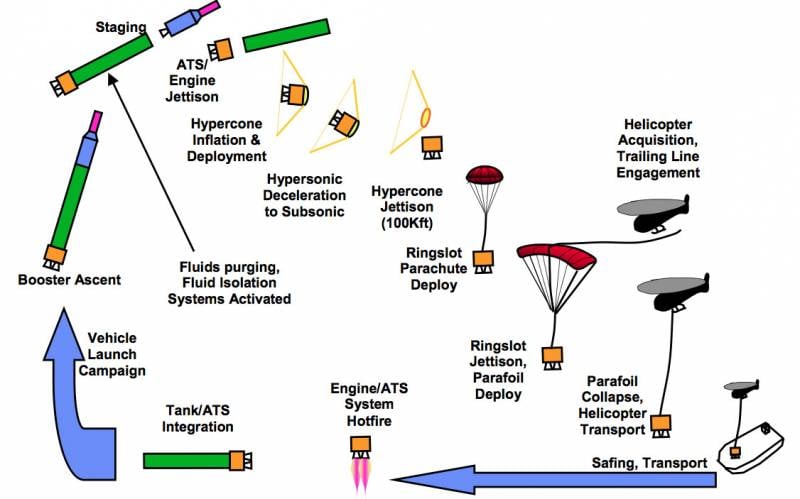 The technology is called Sensible, Modular, Autonomous Return Technology (SMART - smart, quick-witted). Marching and steering engines will be caught in the air, this is the most expensive part of the first stage. The ULA plan is for the lower part of the rocket to disconnect after completion of the first stage. Then, using inflatable thermal protection, it enters the atmosphere. Parachutes will open, the helicopter will pick up the engine block and land with it in any place convenient for this - neither landing space centers, nor floating barges are needed. In SMART technology, additional landing equipment that reduces the payload mass consists of only a parachute and inflatable thermal protection. Helicopter pick-up of parachute loads, a common technology in aviation and astronautics. About 2 million such operations have been completed in the world, and they continue to be carried out. 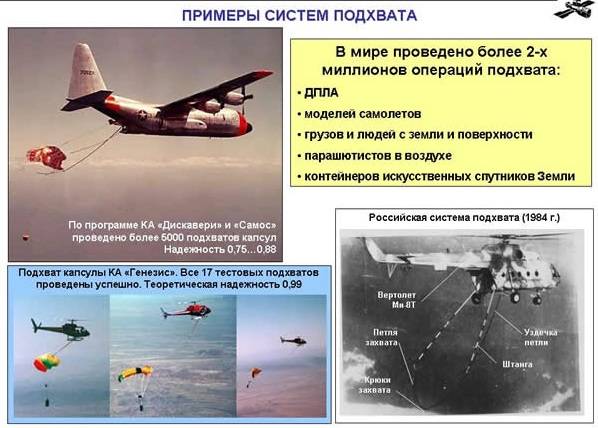 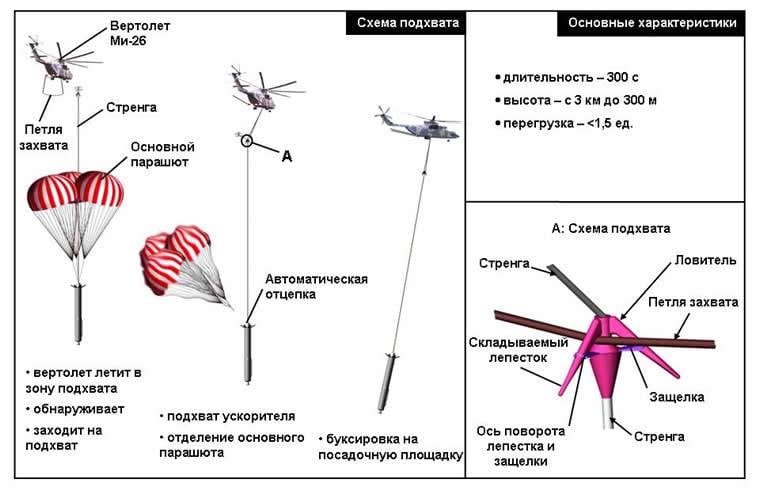 Manufactured by ULA Delta 4 and Atlas 5 (Atlas 5 still flies on our RD-180 and will fly at least until 2019) modular, Vulcan will also be modular with different sizes of head fairings or with additional starting accelerators, which will allow if necessary increase productivity. Modularity distinguishes ULA from other players in the US market (our Angara is also modular): SpaceX has the usual Falcon 9 and the planned heavy version, Arianespace can offer only Vega and Soyuz, but there are no gradations. The volcano will be available in 12 medium to heavy versions. The rocket will be available with head fairings of either four or five meters in diameter. In the first option, you can put up to four solid-fuel boosters, in the second - up to six. In the latter case, the rocket will become an analogue of a heavy modification of the Delta 4.

The first launch of Vulcan is scheduled for 2019 year. It will be implemented either with the help of two Blue Origin BE-4 engines on liquefied gas, or with a pair of more traditional kerosene Aerojet Rocketdyne AR-1. The creation process is quite expensive, so the rocket will be developed in several stages. We are talking about billions: specific figures are not called, but historically it is known that the development of a new rocket engine costs 1 billion dollars, and the start of work on a new rocket is approximately 2 billion.

Ctrl Enter
Noticed oshЫbku Highlight text and press. Ctrl + Enter
We are
Interview: Dmitry Konanykhin about the "macaroni monster" Ilona Mask seriouslyWhat you didn't want to know about England
58 comments
Information
Dear reader, to leave comments on the publication, you must to register.