Monkey with a grenade, or "Javelins" for the APU 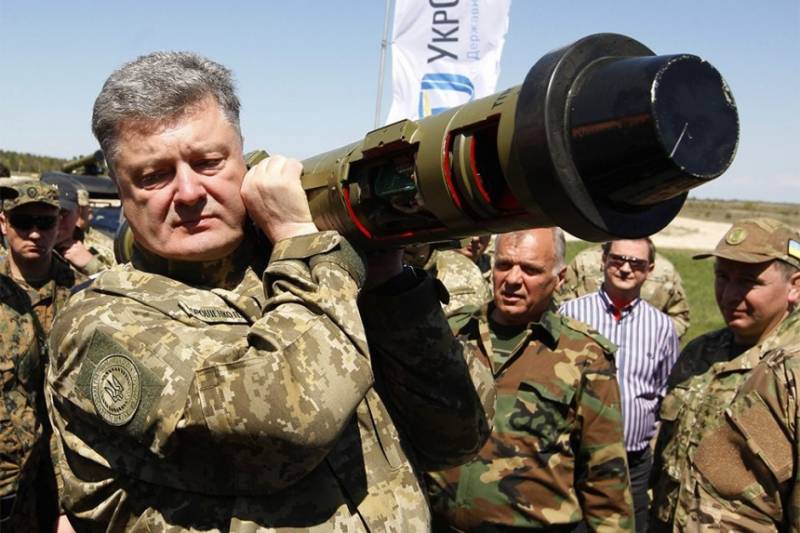 First of all, there is a reality - since the collapse of the USSR on the territory of the former Ukrainian SSR, by means of more or less democratic elections, it was not possible to bring the openly Russophobic regime to power. Moreover, the results of the first bloodless coup showed that the population of this territory does not lend itself to accelerated re-education, does not value the efforts of "all civilized humanity" and does not want to sing hosanna to the progressoristic efforts of this very "humanity."

Contrary to the wishes of the progressors, but even of the “bad” Russia (which supplied Yulia Tymoshenko and allocated about $ 15 billion to her in the pre-election year, 2009 - in the form of discounts on gas, prepaid transit, Firtash gas, etc.) , an irresponsible population voted worthless Yanukovych. Preferring a thief, a coward and not a Russophile openly anti-Russian politicians. To restore "historical justice "had to organize a second, now bloody, Maidan.

And no matter what anyone said, he was supported by all. Many Western politicians personally came to support the "peaceful protesters", with the light of the burning "Berkut" and the poor fellows, conscripts. The foreign ministers of Poland, France and Germany personally put their signatures on the guarantees of peaceful completion of the Maidan. And in the following months they overwhelmed Kiev not only with congratulations and assurances in support of “people's power”, but immediately, without waiting for Poroshenko’s appointment as president, allocated the first tranche of 4,5 billion dollars through the IMF.

In the next few months, neither trees cut at Khreshchatyk, nor executions in Kharkov (March 14) and Mariupol (May 9), nor the burning of people in Odessa (May 2), nor the bombardment of the center of Luhansk (June 2), the US, EU and their Allies to the established power did not change. Moreover, formally, as they say - de jure - to this day, they all have not changed their attitude towards the current regime. And this is logical.

After all, we know perfectly well that any "law becomes obsolete at the time of its adoption." Any power we have chosen (even if actually chosen) is worse than we expected and does not justify the hopes placed on it.

And the Kiev regime is no better. And no worse. He was brought to power by those who weapons in the hands of overthrew Yanukovych. Tyagnibok, Klitschko, Paruby, Yatsenyuk, Turchinov, Yarosh, Belitsky, Paruby, etc. - all of them, and many others, are the current authorities. No Communists, separatists and other "enemies of the Ukrainian people" leaked to the government. Reciprocal accusations and revelations of “Putin’s agents” are nothing more than the usual struggle for power within the regime.

The USA, the EU and their satellites are also a sin to complain. It is to these particular people that they helped from the first days of Maidan. It was these militants who were being prepared in Galicia by the first “revolutionary” head of the Security Service of Ukraine, Nalyvaichenko. The West helped the same regime, sending both ministers and Saakashvili himself, and a battalion of the name of Dzhokhar Dudayev formed in the EU, and thousands of advisers, military, experts, CIA employees sent it to help precisely these “people.” And tens of billions of dollars and euros, sniper rifles and Hummers, radar and expired suhpayki - also this mode.

And you shouldn’t blame everything from a sore head to a healthy one and blame Russia and President Putin personally for the fact that in the West “they wanted the best, but it turned out as always.” No matter how big and strong Russia may be, Russia is not able to resist the combined power of the United States, the EU, NATO and their numerous allies "in the struggle for Ukraine". Moreover, in the West they were well aware and initially prepared for the fact that "Russians do not abandon theirs," that obviously weaker Russia will still struggle as much as it did with what the "civilized West" arranged for it in southern Russia. , in the city - "Mothers of Russian Cities".

They knew, prepared, crushed and crushed by sanctions. And they have on the ruins of Ukraine that they have. For almost four years of the rule of the leaders of the Maidan was not built NOTHING. That destroyed and stolen abound. But nothing is created. Unless the mechanism of corruption extermination is perfected to perfection. And Russia is not to blame for this — such allies and servants of the West. The best bow and cookies are not for sale.

And if you look impartially on the past years, we will see the same process of awareness, which occurred in the West after the first Maidan. From unconditional support of Yushchenko and Tymoshenko in 2004-2005, to gradual detachment in subsequent years. And in the 2009 year, Yushchenko was practically unshakeable. All these heroes of the Orange Revolution, by the time, snapped between themselves, completely disappointing the West.

"Do not justify the high confidence."

The same thing is happening today. Even the dates are the same. In the West, organized and supported Maidan are not fools. They understood that not everything will turn out, that the material got mediocre, "the best of the worst." Understood, but played by those who were available. And if the size of financial, political, economic and military assistance was reduced, then for an objective reason - in the West they realized that the material turned out to be even worse than the calculated one - self-interested, greedier, stupid ... but simply often mentally ill.

That is why today the West is tightening its screws, closing the full-flowing river of macro-financial assistance to a tiny credit stream, restricting the supply of weapons to rifles, UAVs (without numeric codes), old Humvees and other “non-use” that allow the media to write about support and the next “breakthrough” but really not affecting anything.

A striking example is the hysteria that lasted for several years, with the expectation of supply of Javelin anti-tank systems. By the end of last year, even the figure was voiced - as many as 35 PUs and more 200 missiles. Then they suddenly started talking about replacing them with the ancients, another 70 of the year, Tou ATGM. And yesterday it turned out that

There are no plans to sell or transfer TOW to Ukraine

- said the representative of the press service of the Pentagon Johnny Michael.

In fact, it doesn't matter at all whether Tou or Javelins, 35 PU or 50. It does not even matter whether they are delivered or not. Much more important is the simple fact that organized and paid, and taught, and supported Maidan and all subsequent disgrace, the West is disappointed.

Yes, they brought to power the best of those who could be found in Ukraine. Yes, they helped this for years ... hmm ... people to keep in power and achieve the stated and really desired goals. Yes, they did not build illusions and did not expect much. But by the year 2018 in the West they realized that of all the desired goals they had achieved only one - they ravaged and practically destroyed Ukraine.

Yes, that was one of the goals. No one was going to pay for her transformation into a prosperous EU member state. We would like to - even in the 90-e paid. The goal was to disrupt Ukraine from the Russian orbit and turn it into a beautiful bridgehead - a formally independent Russophobic state. The eternal irritant of Russia, its worst enemy. With bases and missiles, with a million-strong army. Reliably overlapping any land route from Russia to the EU.

The dream and plans are not realized and it is already clear that they will never be realized.

And if so, why spend money? The West is realistic - for the further destruction of Ukraine and the transformation of this territory into the ruin of the Javelins, and money is not needed. The ruling regime has a quarter-million army that does not want to fight, and the same number of murderers, punishers and scum in other armed structures, from the SBU to the frankly illegal gangs of pravosekov.

Hating each other, fighting for a piece of power, for a pack of dollars or for the opportunity to knock out a place at the back of the trough with the hope if not to get rich, then time to get out of the country "as a particularly valuable frame", all these post-western western feeds successfully accomplish the task minimum, since for more they are not capable. Destroy as much as possible, stretch the dying as long as possible - that's good.

Therefore, there will be no US, and even more so the EU to overstrain and supply the regime. Now in the West there is another task - how carefully, without losing face, to distance ourselves from what is happening on the ruins of Ukraine. So that you can talk:

I'm not guilty, he came!

Ctrl Enter
Noticed oshЫbku Highlight text and press. Ctrl + Enter
We are
Dmitry Medvedev. Russia and Ukraine: life under the new rulesWill Yulia Tymoshenko merge again? Material from the series "Maidan Leaders"
22 comments
Information
Dear reader, to leave comments on the publication, you must to register.