Troops Smoke and Flame. Part of 3. The brainchild of the Russian emperor

January 16 2018
55
Founder of taking flamethrower weapons The Russian Emperor Nicholas II became the arsenal of the Russian army and the formation in its structure of specialized flame-throwing units.


The last Emperor paid great attention to armaments, and the flamethrower weapon, a novelty of that time, was no exception. 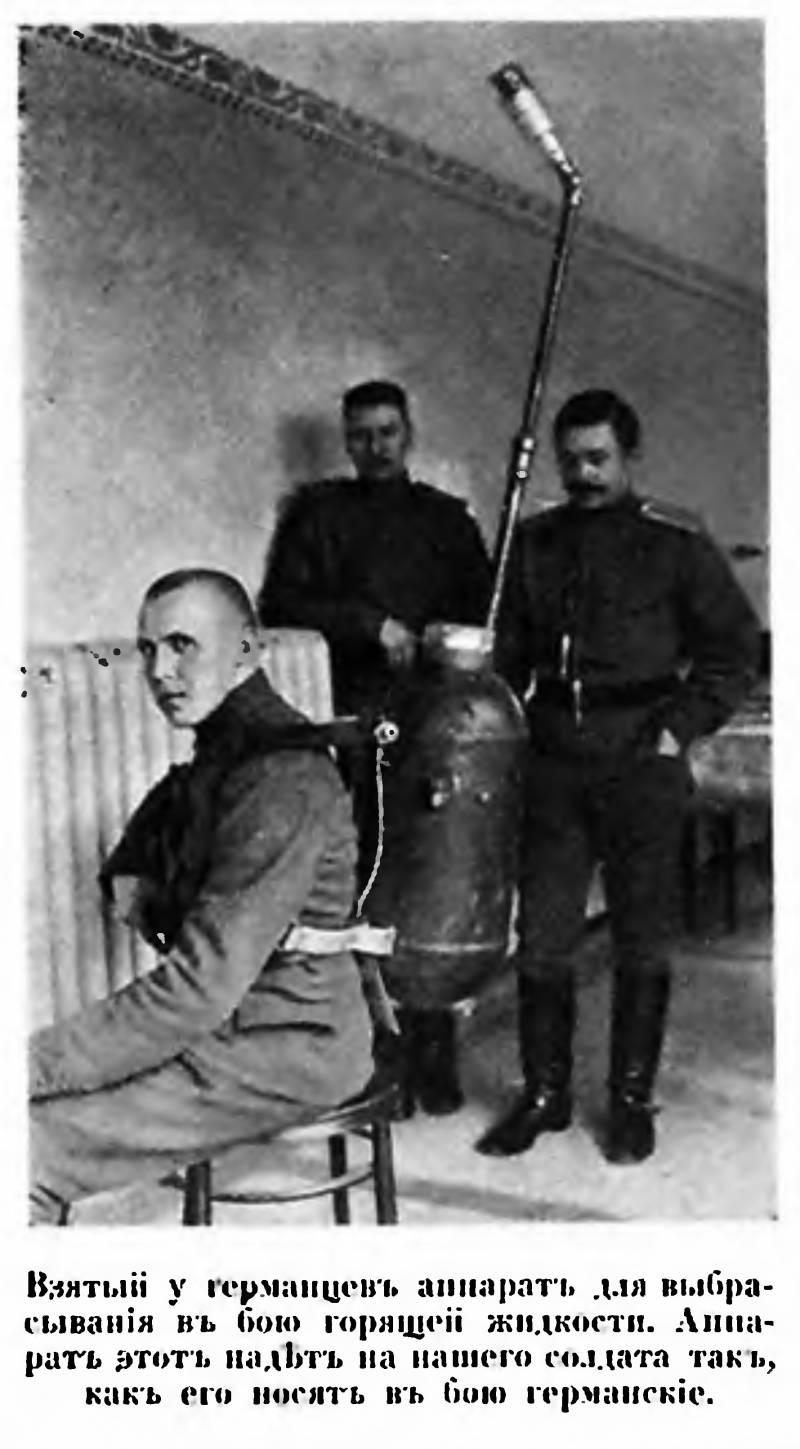 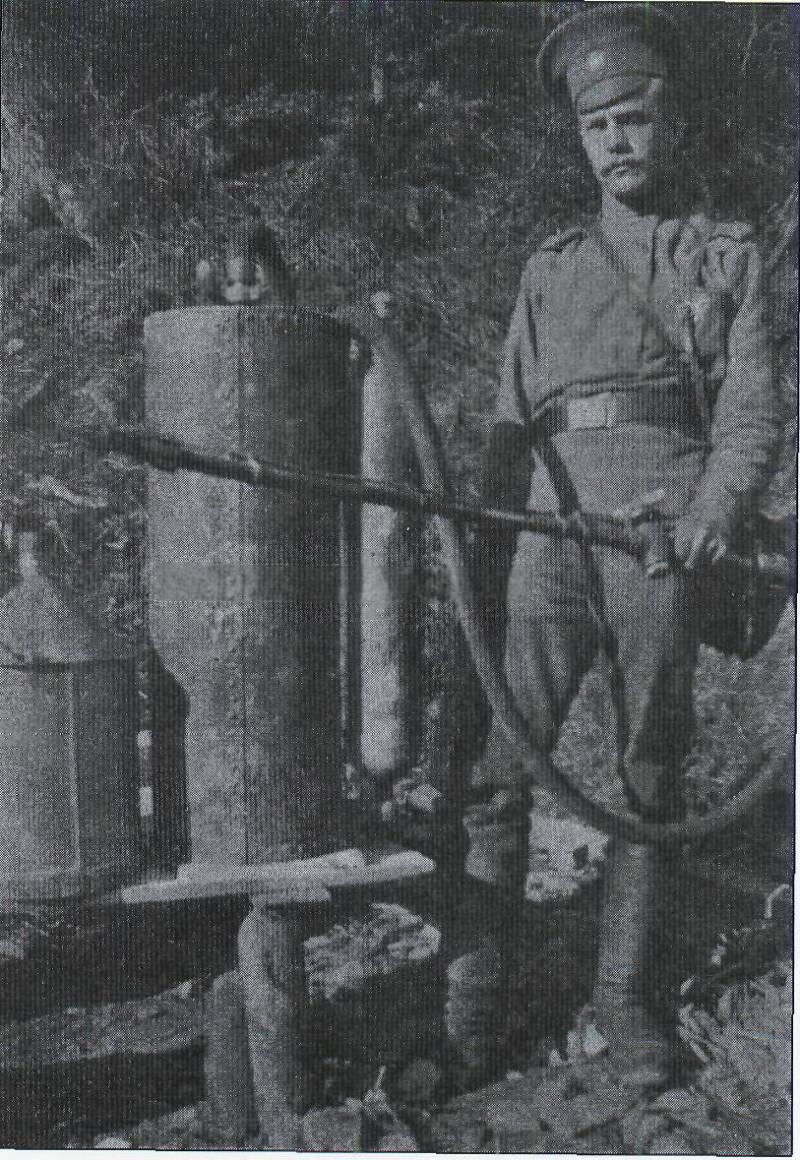 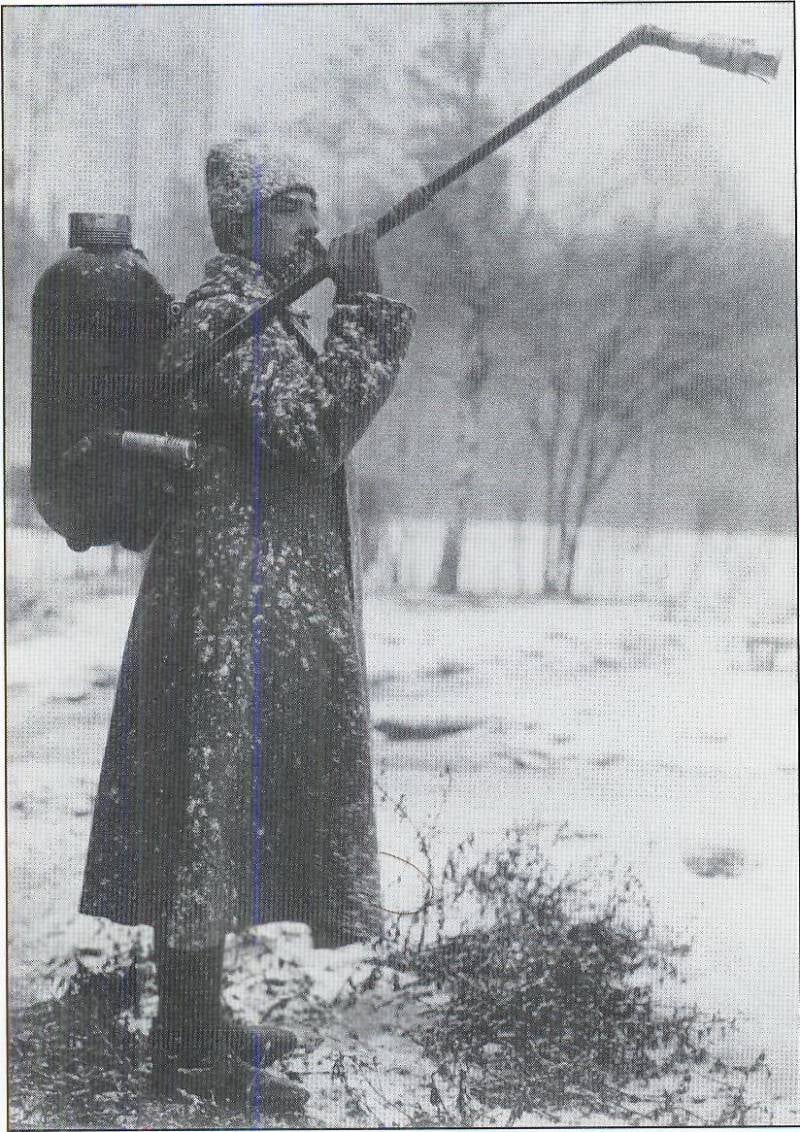 When in May 1915, the Main Artillery Committee decided that the adoption of flamethrowers by the Russian army was inappropriate, it was the decision of Nicholas II that allowed further study of the flamethrower issue.

In September, 1915, just a month after the Emperor occupied the post of Supreme Commander-in-Chief of the Army in the Army, 20 tests were carried out on the excavation of the Gorbov’s backpack flame thrower. And in February 1916, an order was issued for the manufacture of 1500 such flame throwers.

19. 02. 1916. The Emperor authorized the establishment of the Military Chemical Committee of the Main Directorate of the General Staff - he had to carry out the functions of supervising the production of gas masks and monitor the training of troops in countering the enemy’s chemical weapons.

And 08. 03. 1916 on the Yakobshtadsky bridgehead 5-I Army Lieutenant-General V. I. Gurko in the Naroch operation for the first time uses a new weapon - gas grenades and flamethrowers.

On April 3, the Emperor establishes the Chemical Committee of the Main Artillery Directorate, whose 3 department was in charge of the flame-throwing weapons. The Committee included officers, scientists and representatives of non-governmental organizations. An 3-company training fire-chemical battalion is being formed (9 officers, 20 non-commissioned officers and 645 privates). 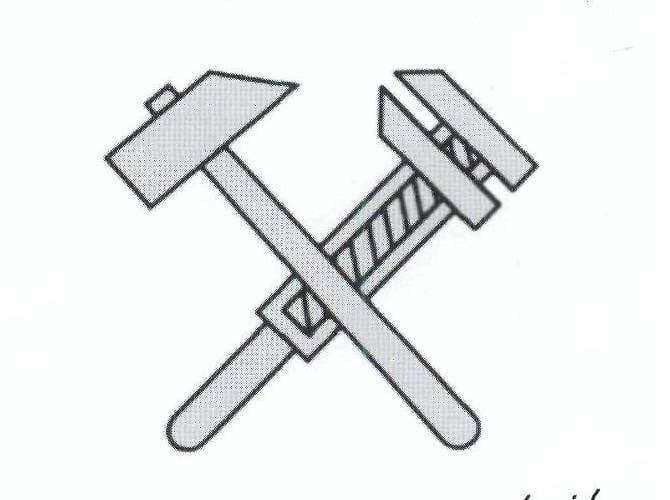 62. The emblem of the educational fire-chemical battalion. Photos from the book. Thomas Wictor Flamethrower Troops of World War I., 2010. 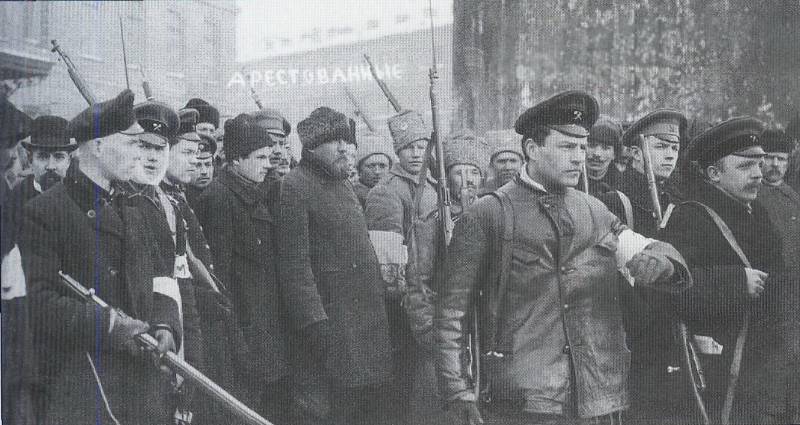 63. Instructors of the Training Fire-Chemical Battalion. Photos of the period of the October events 1917, Petrograd. The emblem has migrated from the disappeared epaulettes to the band around hats. Near the black with a light green vypushkoy. In addition to studying flamethrowing, the battalion trained 14-ti army chemical command specialists on gas warfare and smoke screen installation. Disarmed by the Provisional Government in July 1917 for pro-Bolshevik sympathies, units of the battalion took an active part in the October Revolution. Ibid.

So, 28. 04. 1916, Mr. Nikolay II was present at the ground tests of the Tilly-Goskin flamethrower. The Emperor has posted a corresponding entry in his Diary. [Diaries of Emperor Nicholas II. M., 1991. C. 584.]. The importance of the fact of testing a new weapon is evidenced by the fact that the next day, in a letter to the Empress, Nicholas II returned to the question of a flamethrower test. [Platonov, O. A. Nicholas II in secret correspondence. M., 1996. C. 529.]. 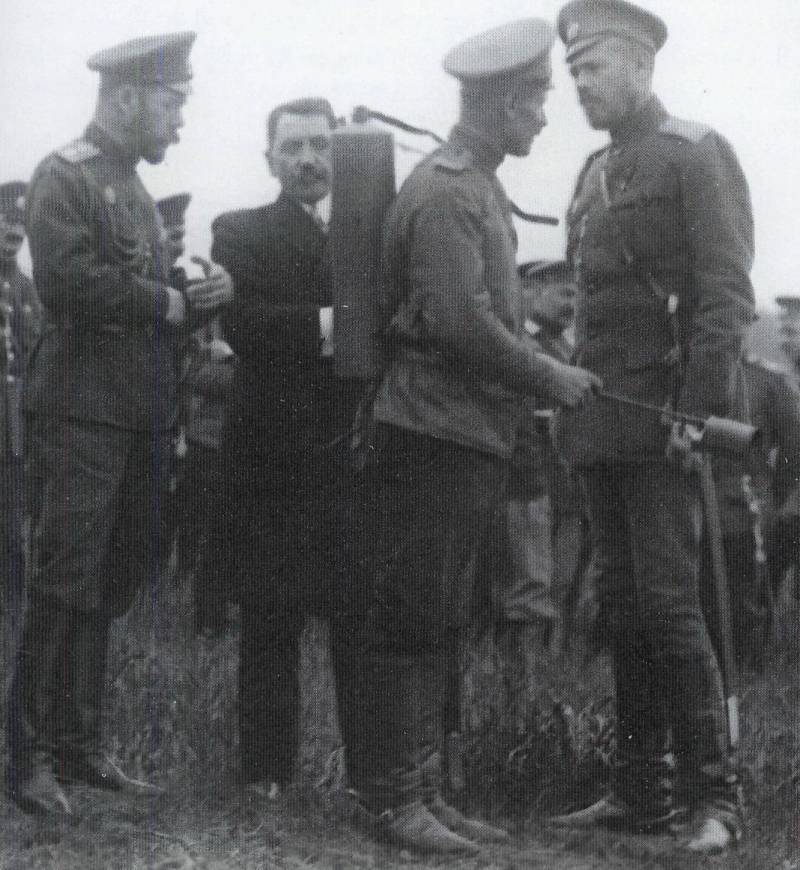 64. Nicholas II (leftmost) on the tests of the Tilly-Goskin flamethrower, April 1916. Ibid.

The decisions of the Emperor influenced the changes in the structure of the Russian army. It was decided to form teams of heavy flamethrowers. These teams were to be given to armies (at first, their number — by the number of armies — 13) and fronts. But by the end of 1916, flamethrower teams equipped with light flamethrowers appeared in the troops of the current army. It was decided to include them, as well as machine-gun teams, in the regiments - these teams were to become an important tool of fire confrontation. The flamethrower team had to be active both in the offensive and in the defense - and the presence of such units in the infantry units was especially important during the period of positional warfare. The armament of such a flamethrower team - 12 knapsack flamethrowers and 4 - 37 mm trench guns. The flamethrower team included an officer and 29 of the lower ranks. The creation of flamethrowing teams began in the fall of 1916, starting with the divisional level (one flamethrower team per infantry division), and then planned to descend to the level of the regiment. In order of priority, flamethrower teams equipped the troops of the following fronts: Caucasus, Western, South-Western and, finally, Northern. 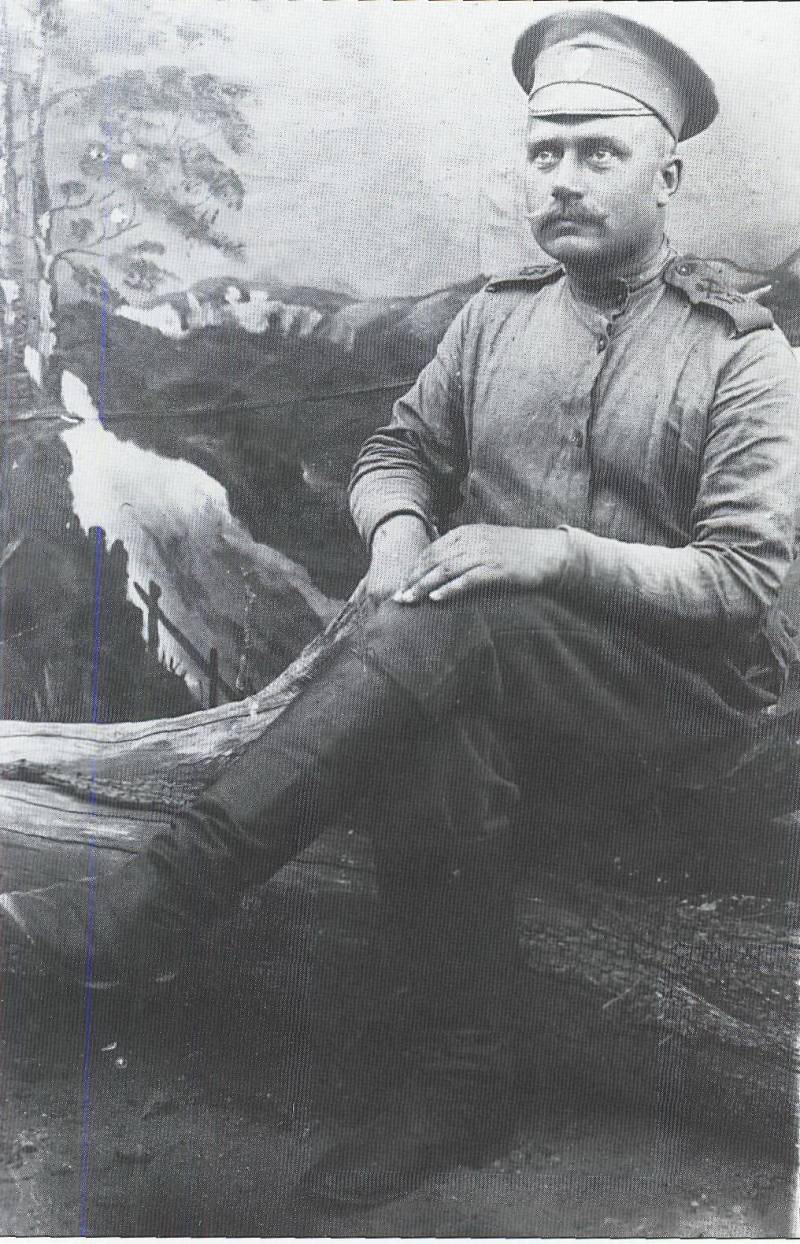 65. Russian sapper, a fighter of one of the chemical teams. Ibid 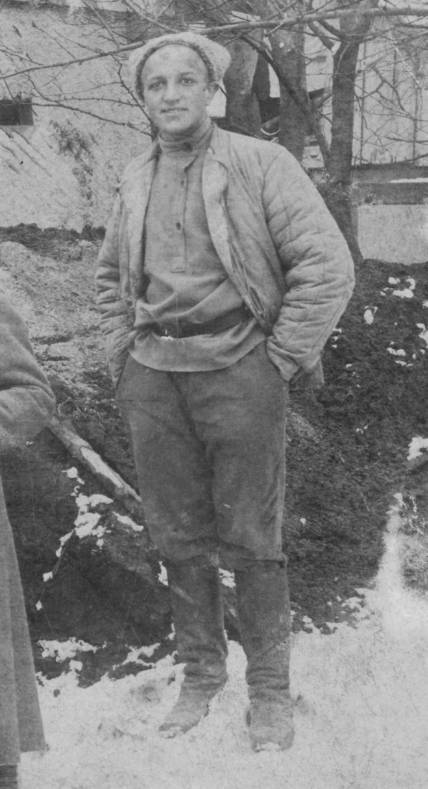 66. The mining engineer of the 1 Army Chemical Team. Ibid

11. 09. 1916 was a landmark order for the flamethrowing troops of Russia. He ordered the creation of flamethrower teams in a number of regiments of the Army in Action - 12 Guards, 16 Grenadiers and 208 primary infantry. Appeared 236 flamethrower units - at the level of the tactical (regimental) level of the Russian army. December 5 was ordered to form 3 powerful stationary flame-throwing batteries - for the defense of key sectors of the front. The structure of such a battery included 4 powerful trench flamethrowers (systems of Tovarnitsky, Vincent and General Ershov) with 6 officers and 128 sappers. 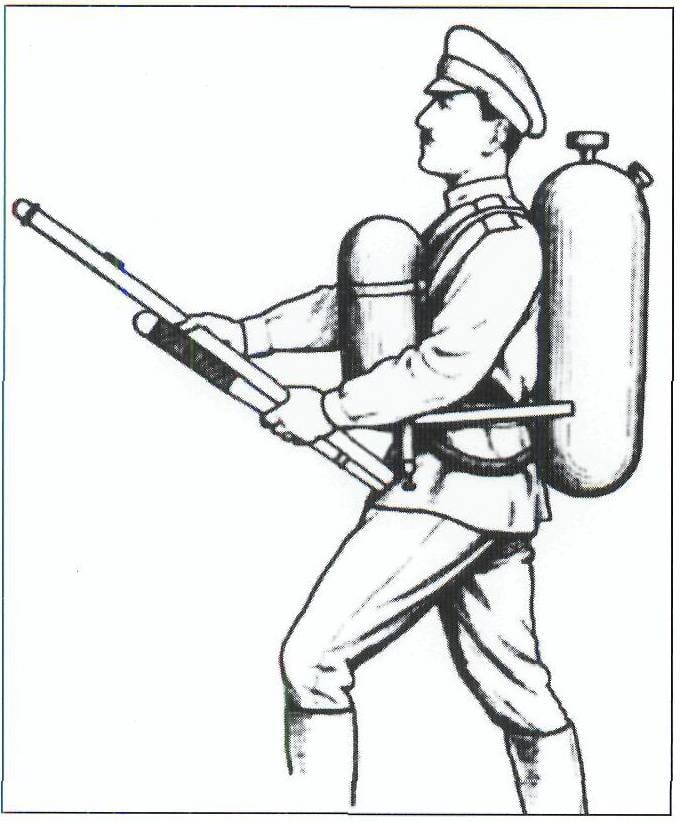 The decision of the Emperor and the Supreme Commander Nicholas II was of key importance for this process.

Flamethrowers should not only hit manpower and equipment, but also have a moral impact on the enemy - which was very important. Observing some technical backwardness of the Russian army from the enemy in certain positions, the Emperor during the war paid special attention to the adoption of technical innovations for the use of Russian troops. The war, marked by an unprecedented use of technical means of warfare, led to the rise of national science and technology.

In the middle of 1916, the backpack flame-throwers of the systems of the designers Tovarnitsky and Aleksandrov were put into service. At the same time, Russian engineers Strandin, Povarnin, and the Capital invented a high-explosive piston flamethrower. The flamethrower weighed about 16 kg (curb - 32,5 kg). 35 - 50 flame throwing range. The combustible mixture was pushed using the pressure of powder gases, while in comparable foreign flame throwers (which had lower characteristics), the mixture was usually ejected with hydrogen and compressed air, carbon dioxide and nitrogen. Named after the first letters of the names of the designers, the ATP flamethrower at the beginning of 1917 passed the tests and went into mass production. The use of pressure of powder gases for the release of fire mixture is the basic principle of the functioning of flame-throwing weapons until now. 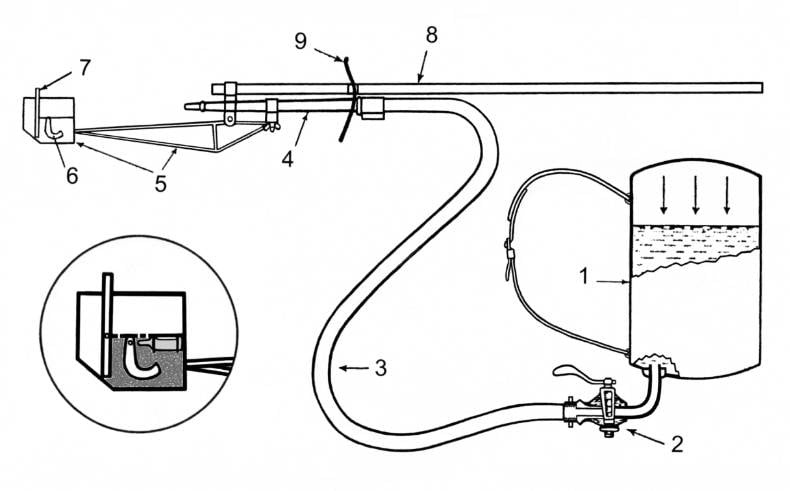 69. Explosive flamethrower ATP. Entered the Russian army at the beginning of 1917, ibid. 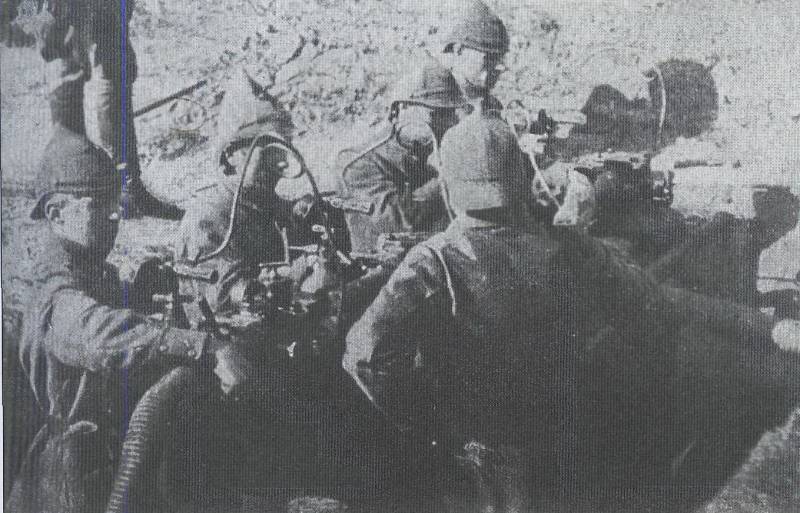 70. The Red Army at the Vincent Flamethrower Battery, 1920-ies. Russia managed to get 36 of such batteries. Ibid 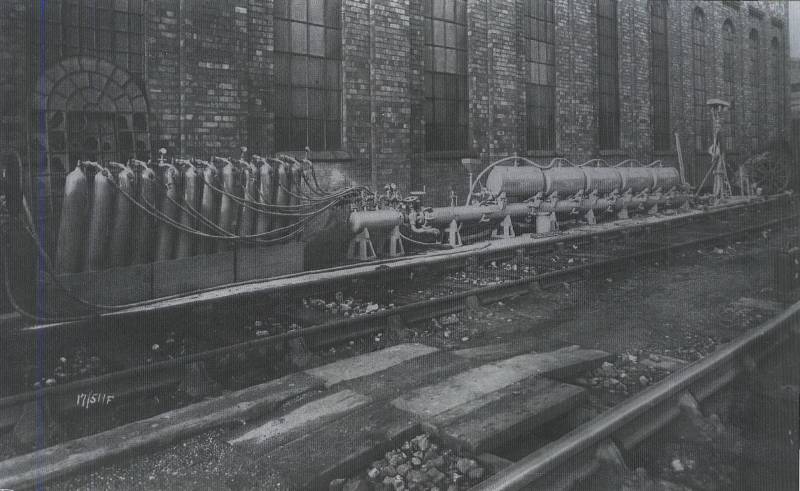 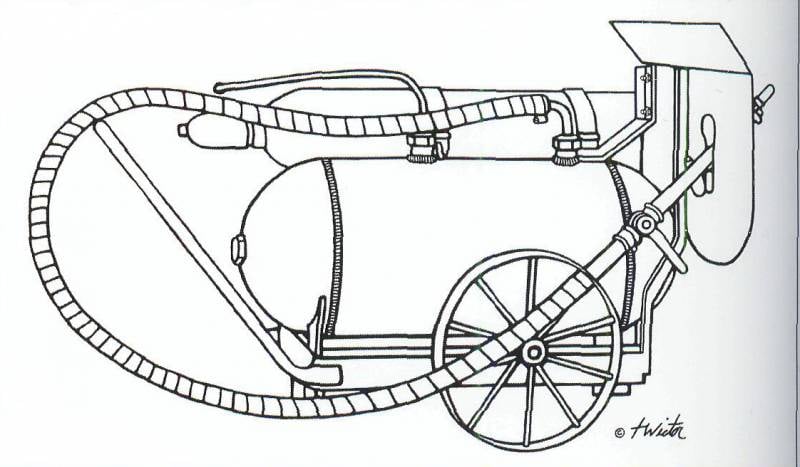 But…
It happened историяthat the completion of training for divisional and regimental flame-throwing teams coincided with the abdication of the Emperor. Headed and disorganized Russian army began to plunge into chaos ... 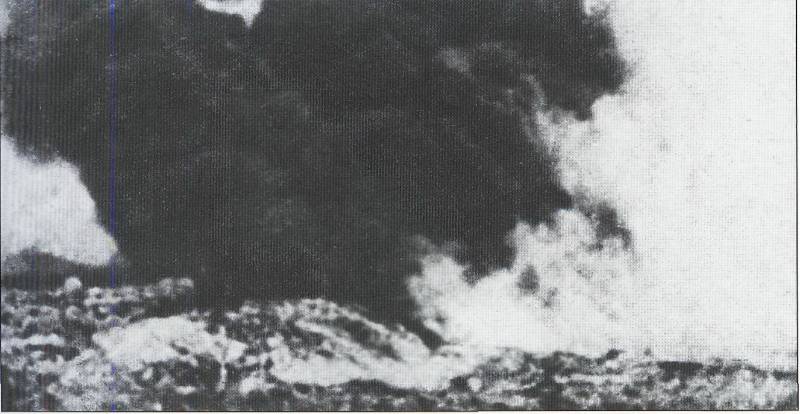 73. The poor quality photo shows the knapsack flamethrower of the Russian army in action. On the head of the flamethrower (in the lower left corner) of the photograph is a steel helmet of the Russian modification (sample 1916) of Adrian’s helmet 1915. Flame-throwing teams, as well as assault companies and machine-gunners, were equipped with such helmets in priority order. Ibid 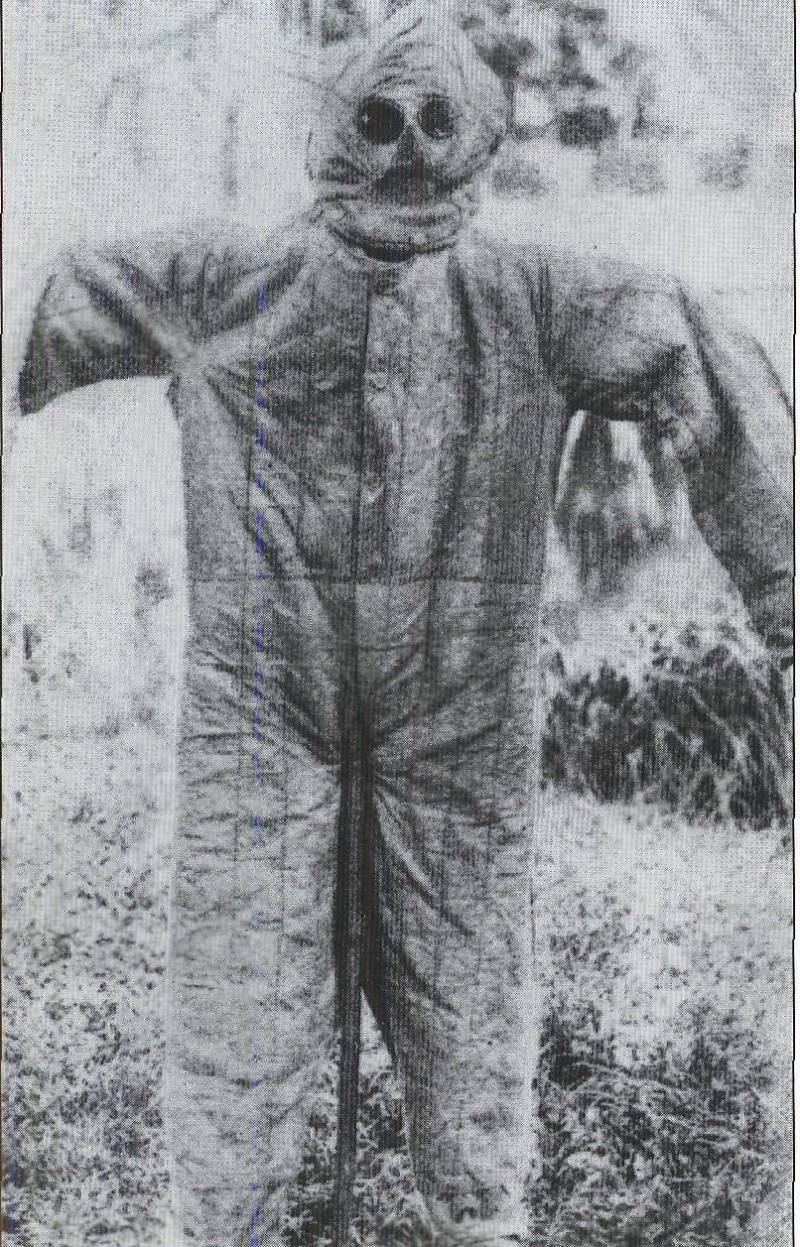 Not being able to complete the formation of full-time flame-throwing units of the Army, the General Staff decided to unite the units and units of the gas and fire war: to form special flame-throwing units within the Chemical teams. The latter were supposed to be temporarily attached to infantry regiments to solve specific offensive or defensive tasks, returning to the chemical teams after the completion of operations.

Units equipped with knapsack flamethrowers, participated in the fighting in the summer and autumn of 1917. Russian troops not only used flamethrower weapons, but also developed tactics for its use. 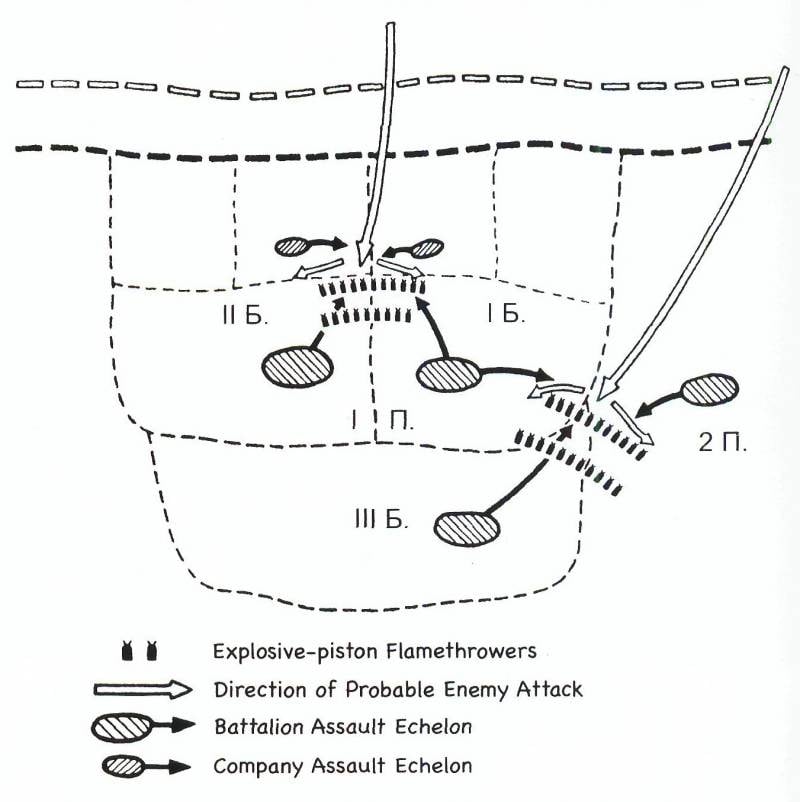 75. The use of ATP in the defense. Tactical scheme. Ibid

In the middle of 1917, three batteries of trench flame throwers finished their training and went to the front.

6 June 1917 The Supreme Commander ordered the formation of a flamethrower unit with one regiment of each infantry division. Each of the 14-ti chemical teams was supposed to organize courses - in order to teach the infantrymen to use flame-throwing weapons. Instructors from the Fire-fighting Chemical Battalion were sent to each army.

On June 17, on the first day of the 1917 June offensive, the 7 Army chemical team carried out a flamethrower attack — a blow was struck against the positions of the German 104's reserve infantry regiment near Březan. After an hour-long artillery preparation, sappers-flamethrowers under the cover of a smoke screen moved forward. And behind them rushed waves of infantry. But the Germans repulsed the attack with heavy fire of artillery, mortars, grenade launchers and machine guns. The repeated attack was frustrated — the enemy’s strong fire did not allow him to leave the trenches. Then an artillery strike was struck against the German positions, and then a gas balloon attack was carried out. 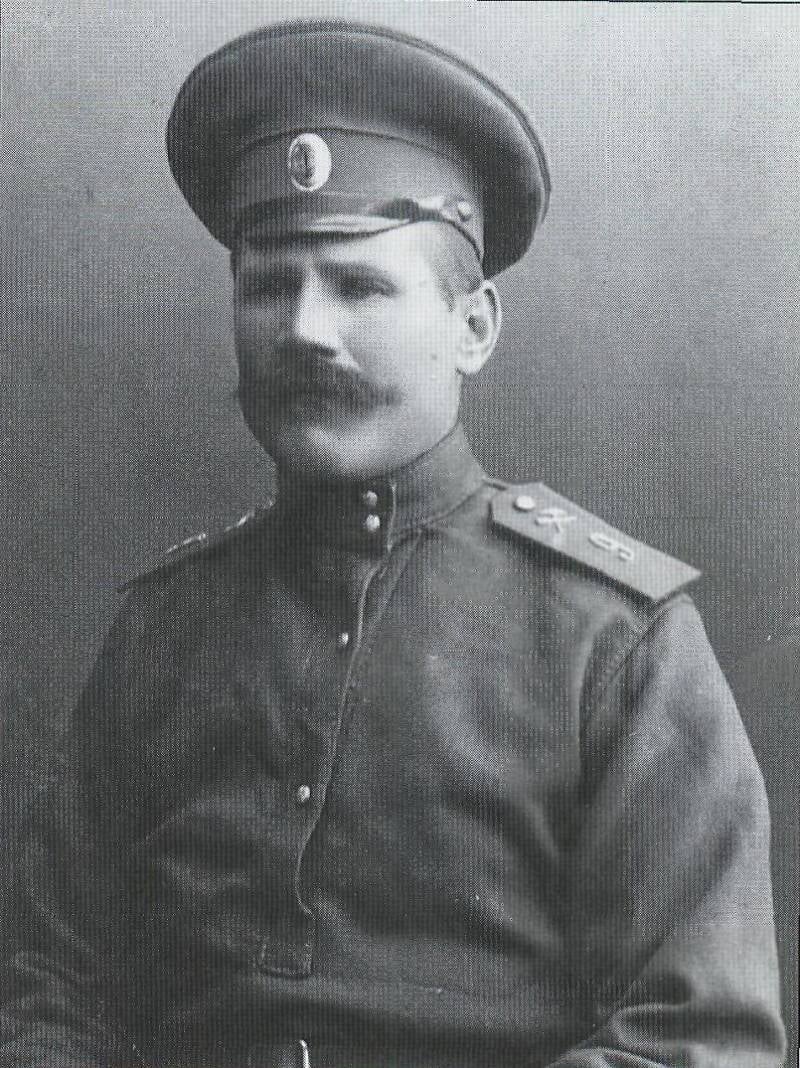 Other information about the use of flamethrowers during the Summer Offensive is not available - although this weapon was certainly used in other sectors of the Russian-Austro-German front. There is no information about the inclusion of flamethrower units in the composition of the shock and death units. In September 1917, the chemical team will be reorganized into chemical companies numbering 240 people each. 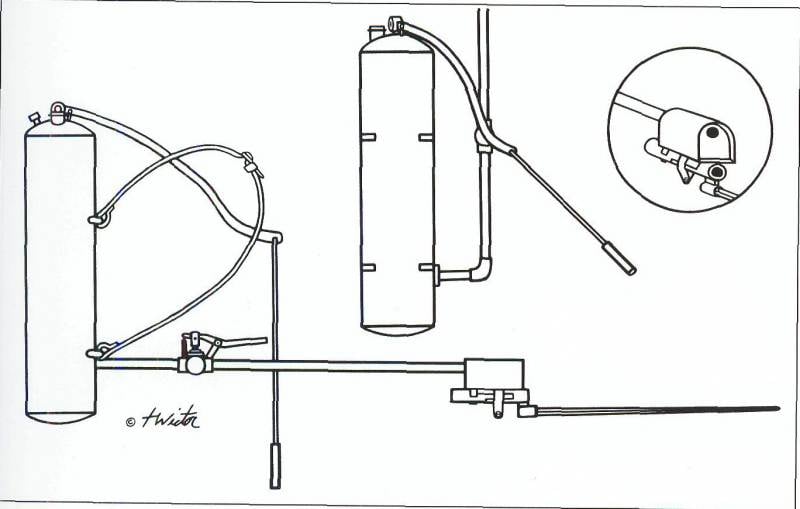 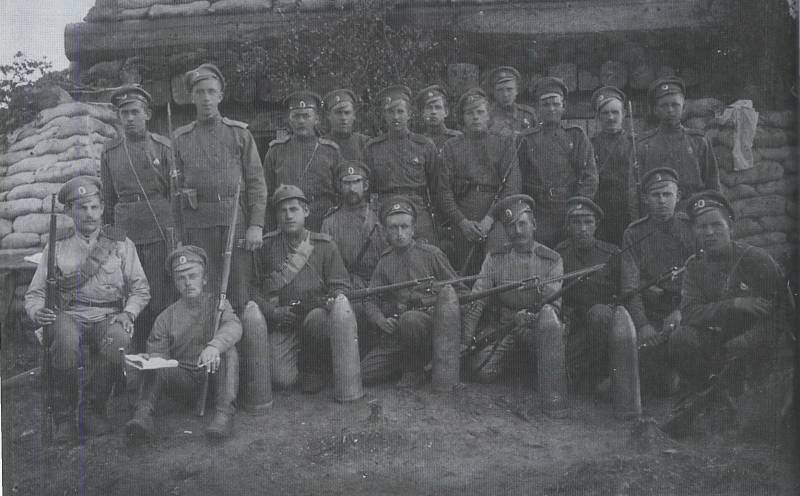 78. Russian infantrymen. Arisac rifles are armed, some in steel helmets. In accordance with the order of Glavkoverha from 6 June 1917, the flamethrowing units were to be formed in the part of the infantry regiments of the Russian army. Ibid

Ctrl Enter
Noticed oshЫbku Highlight text and press. Ctrl + Enter
We are
Reports from the militia of New Russia for 27-28 September 2014 of the yearAbout 58 thousand new rocket flamethrowers RPO PDM-A entered the 2 Army
55 comments
Information
Dear reader, to leave comments on the publication, you must to register.