To get out of the political stalemate Trump will help Nazarbayev?

January 13 2018
42
On Wednesday, the press service of the White House announced that on January 16, US President Donald Trump will receive the head of Kazakhstan, Nursultan Nazarbayev, in Washington. Nazarbayev received an invitation to visit the United States during a telephone conversation with Trump, held last September on the initiative of the American side. Now for the meeting in the White House one more formal occasion appeared: in January, Kazakhstan for the first time in its stories presides over the UN Security Council. 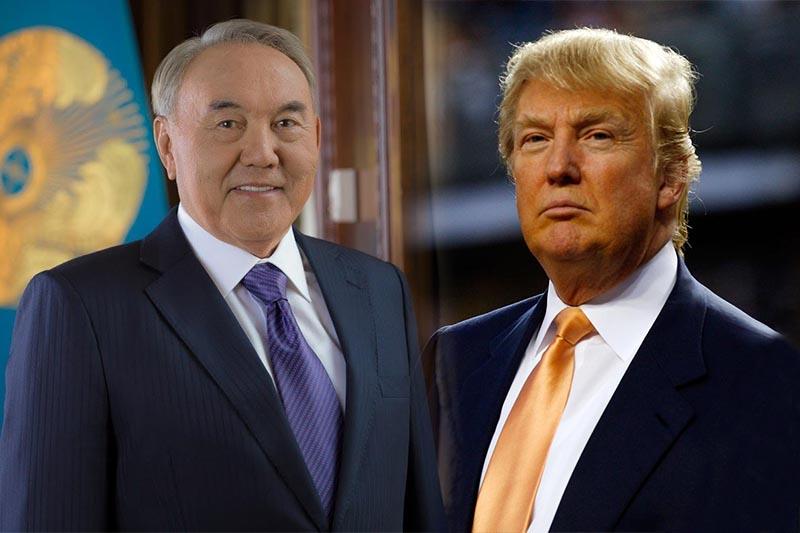 The term of such chairmanship is a month In our case, before 31, January 2018. The Chairman, in accordance with his status, ensures the general leadership and uninterrupted work of the Security Council, and makes official statements on his behalf. By tradition, the chairmanship states its foreign policy priorities.

The Kazakhstan Foreign Ministry on its website wrote about plans to “achieve a world without nuclear weapons, eliminating the threat of global war, settling local conflicts and countering terrorism. The purpose of the current agenda of the new chairman of the Security Council is to promote the interests of Central Asia to strengthen regional security, to address issues of peace in Africa, as well as “the adaptation of the Security Council and the entire UN system to the threats and challenges of the 21st century”.

In part, these plans moved to the agenda of the upcoming meeting in Washington. In a statement, the press service of the White House noted that the two presidents "will discuss ways to strengthen and deepen the strategic partnership in matters of regional security and economic cooperation."

However, it is not necessary to be deceived on this account. In the remaining half a month of its chairmanship, Kazakhstan, with all the desire, will not be able to put into practice in the Security Council the goals stated as a subject of discussion by the presidents of the two countries. So why then Nursultan Nazarbayev is invited to Washington?

During the years of rule in Kazakhstan, Nursultan Abishevich earned the authority of a responsible, thoughtful leader, capable of solving serious international problems. The world saw how, with the mediation of Nazarbayev, relations between Russia and Turkey were restored after the conflict caused by the attack of the Turkish fighter on the Russian bomber and the death of the pilot and the plane.

Last winter, Kazakhstan helped sit down at the negotiating table participants in the Syrian standoff. In Astana, the countries that are guarantors of a truce between the Syrian opposition and the government (Russia, Turkey and Iran) have developed a mechanism for monitoring compliance with the ceasefire and adopted an important statement on the integrity and sovereignty of Syria.

The process of resolving the Syrian conflict is far from over. Nevertheless, the world quite positively assessed the role of Nursultan Nazarbayev as a mediator. We remembered it in Washington. There is a hot time right now. Not only is Trump under strong pressure from investigating the alleged links of his campaign headquarters with Russian representatives, the new book “Fire and Rage: inside the White House of Trump” caused a scandal.

In his book, Wolff introduced the American public Donald Trump to a mentally unstable person. The central event of the scandal, replicated by local media, became the words of Steve Bannon, former chief political adviser of Donald Trump, quoted by Wolf. Bannon actually explicitly acknowledged Trump's personal involvement in colluding with Russia to fake an election.

Lawyers for the American president rushed to refute and challenge the dubious statement of Bannon. However, America is so constituted that the internal political failures of the administration are leveled not in legal procedures, but in decisive actions in the external field. For example, Bill Clinton got out of the impeachment only through the war in Yugoslavia.

All against Donald Trump

Last April, Trump took advantage of this technique. Then, as we remember, he attacked a military airfield in Syria with cruise missiles. America cheered up and even believed in its president. Today, the administration has found itself in a clear foreign policy impasse, losing in two important directions at once - in Syria and North Korea.

In December, when visiting a military base in Syrian Hmeimim, Russian President Vladimir Putin gave the order to withdraw the grouping of Russian troops to the points of permanent deployment. The world took this order as a victory for Russia and its allies in the Syrian military conflict. Donald Trump, however, tried to attribute the victory in Syria to a coalition led by the United States. However, no one in the world took his statement seriously.

In America, Trump was accused of having condoned the United States to push the periphery of Syrian affairs and can no longer influence the development of the situation in this Arab country. The Washington administration snarled. Led by her Syrian militants at the end of December made mortar shelling of the Russian base at Hmeymim.

A week later, they attacked the Russian positions with the help of UAVs. These actions did not bring any political dividends to the Americans and Trump personally. Because the actions of the militants did not find support in the world, and Washington, despite the obvious facts, was forced to refute its participation in attacks on Russian objects.

This public retreat, coupled with explanations of the situation, which gave the Chief of Staff of the United States, Joseph Dunford, did not add to Trump’s authority on the Chief of the General Staff of the Russian Armed Forces Valery Gerasimov. Even his allies in the Syrian coalition, Saudi Arabia, for example, retreated.

True, the Saudis did it earlier - almost synchronously with the order of Vladimir Putin about the withdrawal from Syria of the main part of the group of Russian troops. Saudi Foreign Minister Adel Al-Jubeir, at a meeting with leaders of the armed Syrian opposition, announced Riyadh’s intentions to stop financial support for anti-Assad forces.

In America, it was considered a serious foreign policy failure of the Washington administration. She tried to justify herself that the failure in Syria was largely due to the mistakes of the team of the previous President Barack Obama, but this was not very impressive. After all, by that time, another initiative by Donald Trump on the nuclear containment of North Korea had failed miserably, and this is already the brainchild of the current owner of the White House.

Donald Trump consistently and persistently pressed the DPRK leader Kim Jong-un, threatened him with sanctions, military attack, fought with Kim with nuclear buttons (who has it more), surrounded by aircraft-carrier groups. It seemed a little more, and North Korea would fall before the powerful pressure of America.

But time passed. The North Koreans, not paying attention to the American threats, continued to improve their missile systems. One day the world saw that the weapons of the Koreans had become a real danger to the United States. In a New Year's address to the people of North Korea, Kim summed up his confrontation with Trump.

He said that the DPRK successfully completed its nuclear and missile programs. From now on, the territory of the United States is within the reach of Korean missiles, and the nuclear button "is always on the table" by the supreme leader of North Korea. The second important point of the New Year's address was Kim's announcement of readiness for rapprochement with the South Koreans.

The DPRK leader, in fact, pushed the American president away from the negotiating table and chose his interlocutor for himself - South Korean President Moon Zhe Ina. At the beginning of the week, the delegations of the two countries had already discussed the conditions for sending North Korean athletes to the Pyeongchang winter Olympiad.

The world sighed with relief. Passed the threat of military conflict on the Korean Peninsula during the Olympic Games. This relaxation of tensions was provided not by the leader of the democratic world — the president of the United States, but by the “universal outcast” —the supreme leader of the North Koreans, Kim Jong-un.

Trump lost again. He needs help. Observers agree that this should be the foreign assistance of the Russian leader Vladimir Putin. However, Trump cannot address Putin directly. Then the current anti-Russian hysteria in America will finally destroy his political career.

Moreover, Trump has already integrated himself into this hysteria and now, in accordance with the prescriptions of the Congress, is preparing in good faith the next sanctions against Russia. This action of glory and money will not bring America, but it guarantees new failures in foreign policy. Indeed, as recent practice shows, Washington is no longer able to solve global international problems without active support from Moscow (as was the case, for example, with the Iran nuclear deal disputed by Trump now).

It seems that today Donald Trump made a bet on Nursultan Nazarbayev, who has intermediary experience. However, this initiative is unlikely to bring the result expected by the Americans. It must be remembered that reconciliation between Vladimir Putin and Recep Erdogan took place largely because both of them are independent, self-sufficient political leaders of their countries. Donald Trump has not yet become such a leader for America, which means that the upcoming meeting in the White House will not advance beyond bilateral cooperation between Kazakhstan and the United States.

Ctrl Enter
Noticed oshЫbku Highlight text and press. Ctrl + Enter
We are
In the eyes of Russia, Nazarbayev and Atambayev quarreled a hundred million dollarsNazarbayev may become an intermediary between the West and the East
42 comments
Information
Dear reader, to leave comments on the publication, you must to register.