Indonesia: A Tidbit for ISIS

January 11 2018
6
The responses of events in the Middle East reached Indonesia, with such a force that they began to pose a threat to the security of the country. Indonesia, with a population of 250 million, is the largest Muslim country and, at the same time, the youngest, based on the number of young people in the population (according to this indicator, it is second only to Pakistan). And not only the future but also the present development of the country depends on whether the Islamic majority of the country maintains religious tolerance or swears allegiance to jihad. 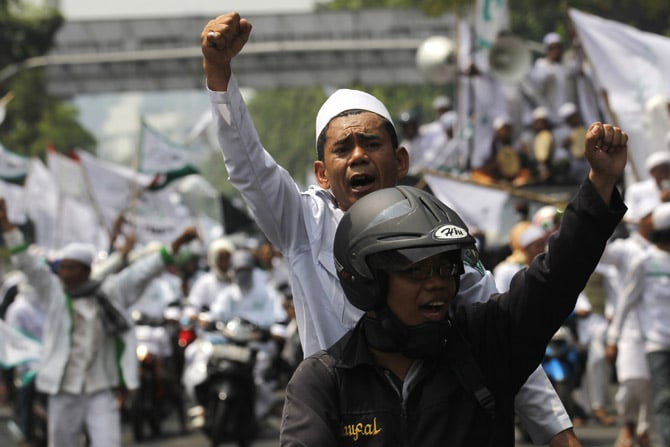 In September of this year, the ASEAN countries issued a statement condemning the ISIL terrorist group and expressed their solidarity with international action to combat it. And this was done not so much under the influence of the international community concerned about the development of the situation in the Middle East, but rather based on the interests of their own security in the light of the spread of the influence of radical jihadists in the countries of the region. The most vulnerable position in this respect is Indonesia.

And there is an explanation. There are terrorist Islamist groups of the jihadist type in the country that are ready to support ISIS, as demonstrated by the video messages of their leaders posted on the Internet. They openly call on Indonesians to weapons in the hands of fighting on the side of ISIS, in whose ranks there are at least 200 immigrants from Indonesia today. As a rule, these are young people in the return of 20-30-years, educated and fairly wealthy, who were captured by the ideas of creating an Islamic caliphate. And the fact that the struggle for it today is conducted in Syria strengthens their belief in the correctness of their choice, which is based, according to analysts from the Indonesian Institute for Political Analysis of Conflicts, on eschatological ideas, according to which the last battle before the end of the world will be held in Shan country ( this is one of the names of Syria in Islam).

The recruitment of future militants is carried out in different ways: preaching in mosques and the dissemination of religious literature of the jihadist persuasion, social networks, local radical Islamic groups. Fertile ground for recruiters are students, including those studying abroad, particularly in Turkey, which is the main transit country (they get there on tourist or student visas, as well as within humanitarian missions), through which Indonesian jihadists are sent to Syria .

The threat of spreading the influence of ISIL in Indonesia with the concomitant strengthening of the positions of radical Islamism in the country is explained both by the country's institutional base of terrorists, strong leaders who are ready to swear allegiance to the caliphate, and by the presence of a susceptible social base of about 3 thousand people so far ( at least, so many Indonesians have expressed their commitment to ISIS on-line), but are able to increase in number, in case of activization of ISIL supporters, on their return to their homeland. They underwent military training, strengthened their morale and acquired international ties.

For the first time since the 1990s, when Indonesian extremists fought in Afghanistan, there was a real threat of involving local Islamists in the global terrorist movement with consequences for Indonesia’s stability. Indonesian jihadists are fighting not only for the creation of an Islamic caliphate in the Middle East, but they are also ready to embody this idea in Indonesia (this is part of the plans of ISIL) with a germ in the Poso region. But the borders of the Indonesian Caliphate, as part of the Southeast Caliphate called Daulah Islamiyah Nusantara (with the inclusion of Malaysia), may be extended, given the existing enclaves of activity of its followers. These are Western, Central, East Java, Jakarta, Sumatra, Kalimantan and other areas.

The very fact of their distribution throughout the archipelago makes it difficult to fight the radical Islamists, which is conducted today in different directions in close cooperation of the state with leading mass Muslim organizations. The fact that they unanimously openly condemned the idea of ​​a caliphate in Indonesia instills some optimism in the possibility of a mass resistance to the threat of the spread of radical Islam in the country. The state is counting on their help and assistance in the first place, trying to deprive the ISIL supporters of social support in society.

The state itself with some delay responded to the threat of spreading the influence of ISIL in the country, despite the fact that its supporters held a mass demonstration in March in the center of Jakarta. Only after the video message of the Indonesian militant from ISIL was posted on YouTube in July, urging their compatriots to join the battle for the Caliphate, the outgoing President Yudoyono imposed a ban on the organization’s activities in the country, followed by arrests of those suspected of having links with it.

However, the Indonesian security authorities complain about the lack of laws similar to those in force in Malaysia and Singapore, which would allow the detention of ISIL supporters without trial. Today, such a preventive mission is limited to monitoring their activities. Other areas of countering the threat of spreading the influence of ISIL are considered legal (in particular, the question is being asked to deprive Indonesians who are on the side of another state, citizenship), organizational (toughening of the visa regime and control over prisons, from where convicted terrorists can now freely transmit video messages, and also above the mosques, where religious processing of future militants is carried out), propaganda (using the mass media for counter-propaganda of radical exercises jihadists, given that about 80% of Internet users in the country are active on social networks, which are the main channel for recruiting ISIS militants), ideological (conducting public outreach on the hostility of ISIL to values ​​of Indonesian society).

The threat of spreading the influence of ISIL in Indonesia is measured not only by the loss of life as a result of terrorist acts, but also by attempts to create a caliphate in the country. The main danger is in the possible split of the Muslim community, in sowing religious hatred, in undermining the foundations of the Panchasila ideology, which ensures the unity of Indonesia, and therefore its stability.

Ctrl Enter
Noticed oshЫbku Highlight text and press. Ctrl + Enter
We are
About Stalin and KhrushchevMilitary reform as an integral part of the security concept of the Russian Federation: Systematic dynamic assessment
6 comments
Information
Dear reader, to leave comments on the publication, you must to register.