January 10 2018
18
At one time, the CIA predicted that sooner or later a nuclear bomb would appear in the DPRK. This was predicted by intelligence and the development vector of the North Korean nuclear program. Both the CIA and other US intelligence agencies were wrong about something else: their specialists did not assume that the North Koreans would create nuclear weapons and delivery systems with such speed. Experts believe that the miss with forecasts in relation to the DPRK was the biggest failure of the CIA. 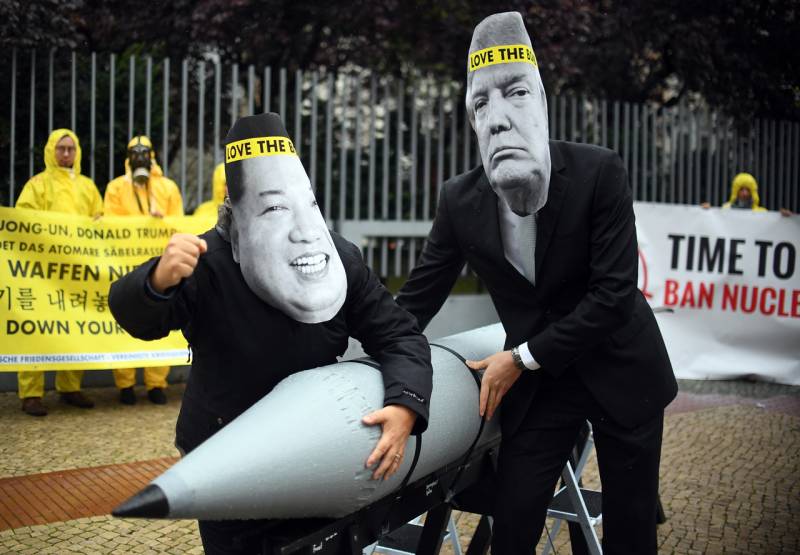 The CIA’s biggest mistake regarding North Korea was as follows. As soon as Donald Trump entered the White House, the American intelligence services informed his administration that the DPRK had built a nuclear bomb, but the United States still has a lot of time (or rather, at least 4 years) to stop in Pyongyang nuclear warheads that could strike at US cities.

The error of the CIA told D. Sanger and W. Broad in the newspaper "The New York Times".

According to the version of the American intelligence officers, the young leader Kim had a number of technical problems with missiles, and therefore Mr. Trump had time to negotiate or to take countermeasures, whatever they might be.

A certain official who presented information on the political situation to Trump reported on even more curious assumptions of intelligence: that Comrade Kim would not be able to strike the territory of the United States until the 2020 of the year, or even before the 2022.

Further, journalists are reminded of the rapid progress of Comrade Kim in missile technology and testing.

Kim Jong-un in 2016, conducted an 8 test of medium-range missiles. And he really had problems: 7 rockets exploded on the launch pad or in flight. Persons close to the White House were quick to explain these failures with the launches of the American “sabotage program” that President Barack Obama gave to the young leader.

However, there were still 5 underground nuclear tests. Despite this, the American intelligence community decided: Pyongyang will need a lot of time, years and years, to develop more powerful weapons, namely the hydrogen bomb. And what do we see? Some months have passed, and all American forecasts are outdated!

Yes, Comrade Kim deftly bypassed American experts. With incredible speed, the DPRK leader came to a new rocket technology based on the model of the Soviet engine, developed decades ago. And then Kim demonstrated models that can reach Guam, then the west coast, and then Washington!

In September, 2017 was tested a nuclear bomb, which experts reluctantly recognized as hydrogen. The force of its explosion turned out to be fifteen times higher than the power of the atomic bomb that razed Hiroshima.

Of course, both the CIA and other American intelligence agencies predicted: such a moment will surely come. The security services foresaw the general development of the DPRK's nuclear program. They missed in another: in the speed with which Pyongyang will act on the nuclear "direction".

The last few months, when the DPRK has demonstrated its successes, have become the biggest failure of the US intelligence services. This was stated in an interview with both retired and current US intelligence officials. The situation in the CIA had been foreseen, but the timing of the program was completely wrong. Hence the alarm with which the Trump team responds to the “nuclear crisis”.

Already, General McMaster, Mr. Trump's national security adviser, openly, in an interview, acknowledged that Comrade Kim’s move to the finish line "turned out to be faster than most people thought, and the deadlines [of the program] turned out to be much more tight."

According to observers, the North Koreans were able to outwit consistently several US presidents, both Republicans and Democrats. Over the years, this "trick" Pyongyang has achieved high technological advances. And there was no effective means against the DPRK: neither the growing military presence off the North Korean coast, nor the attempts of cyberattacks, nor the sabotage of imported parts, or anything else, stopped the North Korean nuclear program.

And Mr. Trump has a hard time: if his predecessors in the White House had time to think about measures, then he has no such time. In addition, the apparent weakness of intelligence on fundamental issues became apparent: in the United States they do not even know how many nuclear units weapons has comrade Kim

Alarmed and impulsive, Trump spoke more than once about the possibility of a war with North Korea and even ordered military plans to be drawn up - from a “flick of the nose” to a large-scale attack on North Korea’s nuclear facilities.

Peter Van Buren in "Huffington Post" confidently stated: sorry, but there will be no war with the DPRK.

There will be no - neither small nor large. Neither today nor tomorrow. There will not be, no matter how much Mr. Trump asserts about "fire and rage."

The author recalls that General Herbert McMaster considers the DPRK's nuclear program "the most destabilizing factor in the period since World War II."

John Brennan, ex-director of the CIA (see above about the quality of CIA forecasts), estimates the probability of a war with North Korea in 25%.

Senator Lindsay Graham found a fairly high probability of the United States delivering the first nuclear strike on North Korea: 30%. Well, in the Council on Foreign Relations this probability was assessed even higher: in 50%.

And now, many in the United States consider the idea of ​​a quick war with North Korea to be "normal."

The analyst himself believes that the threats of war from the White House are only bluster necessary for the self-delusion of the “tough guy” who climbed too high.

Today there is no rational reason to even assume that North Korea will destroy itself by first using nuclear weapons against the United States. Is it possible in Washington to believe that the DPRK, contrary to reason, will consider it necessary to use nuclear weapons "for offensive purposes" and go to war against South Korea for the sake of an "attempt at reunification"?

As for the “defense” strategy, according to it, Washington must strike first and in the near future, before the North Koreans do it. Familiar sounds! Similarly, the Americans said before the invasion of Iraq: they say Saddam has weapons of mass destruction, and one cannot wait for the day when he will use these weapons against the United States. Does everyone remember what Condoleezza Rice did in 2002? She, who in those years occupied the post of adviser to the president of the United States on national security, warned of a “nuclear mushroom”. “How much longer are we going to wait before we deal with an obvious and growing threat?” - this is what she said in 2002 year. Of course, the Bush administration was aware that Saddam did not have such weapons of mass destruction in 2002. Moreover, the administration knew that during the first war in Iraq, that is, during Operation Storm in the Desert (1991), Saddam did not use the available chemical or biological weapons.

Today, the analyst continues, any American plan involves accurate retaliatory strikes by the DPRK. And let them happen just a few, but Americans can imagine a strike, for example, in Los Angeles! .. And will the entire world economic system survive the large-scale nuclear war? And will then South Korea and Japan be allies of the United States? After all, Seoul and Tokyo will be in nuclear fire! Yes, and China - he will hardly be able to keep US government debt securities. The author even suggests that Beijing will cause an artificial crisis on Wall Street.

As for the American president, what he will look like when he tries to explain to his country that Los Angeles, covered with radioactive ashes, is the Americans' security pay. Otherwise, they would have been waiting for a much more terrible nuclear strike ... Trump is already hated by half of the Americans!

In conclusion, we recall that, while the US president pours empty sentences, the young energetic leader of the DPRK continues his rocket business. Will Washington, San Francisco, Los Angeles and other cities turn to ashes? That's what Americans think today! Southern California is so afraid of a nuclear strike that officials are talking about evacuating the population. We previously wrote on "IN"that the United Regional Intelligence Center in Los Angeles published a bulletin warning that a nuclear attack on Southern California would be "catastrophic." An intercontinental ballistic missile made by the DPRK can reach the west coast of the United States. “The propaganda clips of North Korea show the ruins of San Francisco and Washington,” American officials are saddened.

Mr. Trump would talk about the world, not about "fire." But, apparently, I want to make war ... With rockets! Just do not survive Mother Earth such missile wants.

Ctrl Enter
Noticed oshЫbku Highlight text and press. Ctrl + Enter
We are
Reports from the militia of New Russia for 27-28 September 2014 of the yearResults of the week. "Well, do not change me because of every idiot!"
18 comments
Information
Dear reader, to leave comments on the publication, you must to register.