January 4 2018
129
On New Year's Day, it is necessary to make predictions ... Senator John McCain called the recent decision of Washington to supply lethal weapons Bandera Ukraine "step in the right direction", which he waited for three years. I waited. What is interesting here is that this lethal decision was made without an invitation to Washington to advertise President Banderia Petro Poroshenko on it. Not invited, it seems, did not even notified the adoption of a fateful lethal decision. And Petro, in turn, greeted him somehow without much flare. Why, I ask? 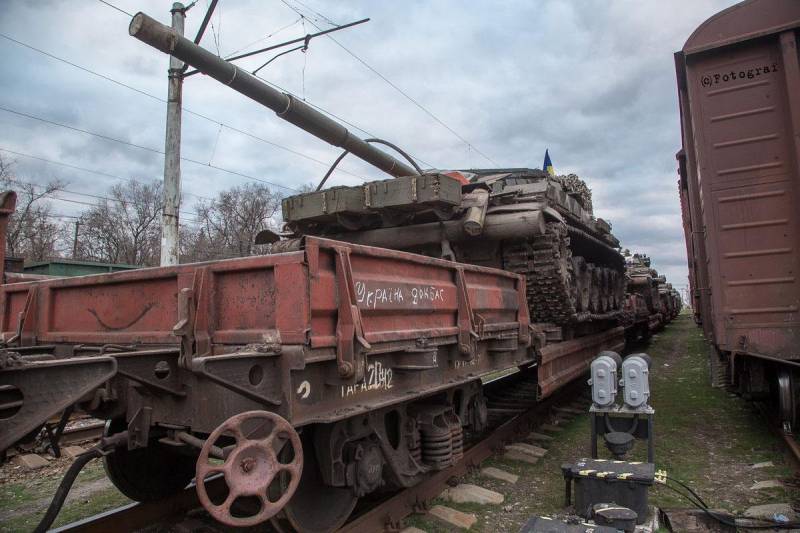 Our politicians appreciated the role of US Special Representative to Ukraine Kurt Volcker as the instigator of the war in the Donbas. Probably, Petro promised it and deceived Kurt. Gave out for the war “toad jumps” of the Armed Forces of Ukraine on the Svetlodar arc and the shelling of Donbass, intensified from November 5 2017 of the year. And Petro ended this military campaign with a pre-New Year prisoner exchange after a personal meeting of his special representative Viktor Medvedchuk with Vladimir Putin. Petro hardly agreed with Kurt. Of course, Kurt and the State Department who sent him such a humanitarian action cannot but welcome, but the deposit from Medvedchuk’s meeting with Putin remained with them. What are they still talking about?

Sergey Ryabkov, deputy. Foreign Minister Sergei Lavrov, regarding the decision of Washington on the supply of lethal weapons, said that "the United States crossed the" red line "and became an accomplice in fomenting the war in the Donbas." Note, not only Kurt Volker, but the whole of Washington. After that, Russia promptly withdraws its military from the JCC in Donbas, remembering the fate of its peacekeepers in South Ossetia.

Older Vice President Joe Biden, although retired, recalled recently about the colonial status of Ukraine, and joined the opinion of a number of American generals that the United States has 4 years left of military superiority over Russia and China, that is, hinted that it is urgent to start a big war . Therefore, delusional accusations of Russia and China are pouring out of the American cornucopia.

It is clear that it is better to start a US war sooner than later, because there will be more advantages, and where do they have opportunities for this? In Korea and in Ukraine. But in Korea, under the noses of both Russia and China, with a militant and nuclear DPRK, and where there is no peace-loving NATO at hand, this is not the best option. The situation is much better for the United States in Ukraine, where there is already a smoldering conflict, and NATO is near. Deliveries of anti-tank "Javelins" and provoke a war in Ukraine, they are planned somewhere in two or three months.

For a guaranteed escalation of tension in the Donbas, the “McCain-Biden-Walker party” needs to remove the weakling Poroshenko with Muzhenko and Poltorak, who have discredited themselves with “toad jumps”. Waiting for the next Ukrainian presidential election in 2019 is too long, but it may happen, quite by chance, the “people's impeachment” of Poroshenko, already declared the third Maidan named after Mikhail Saakashvili, who arrived in Ukraine from America through Poland. The best time for him is the anniversary of the revolution of Bandera’s “gidnosti” in February, and Mihomoydan is ready for this, everything is unraveled, as if waiting for something.

Therefore, the anniversary of the Nazi revolution in February may turn into its second stage, with the “people's impeachment” of Poroshenko and the demolition of his “regime of internal occupation”, as svidomye Bandera argues, oligarchic, naturally. Thus, in the beginning of spring, the regime of “internal trust” may come to power in Banderia, and deliveries of the Javelins from McCain and Walker will begin. We should also expect a major provocation in Ukraine, the scale of the Malaysian Boeing, as a pretext for the large-scale offensive of Bandera in the Donbas, and possibly a provocation on the border with Russia.

This time, the United States will act in Ukraine without notification of its plans for Europe and NATO, especially Germany, to put everyone in front of the fact and the need to choose: support the United States or declare some kind of "new" neutrality, with big consequences for themselves. However, the consequences for Europe will be great in any case, because the construction of the joint venture - 2, and in general trade with Russia, can seriously collapse. Europe in general can be left without Russian pipe gas, as Paul Craig Roberts, an American expert economist and adviser to President Reagan, has long warned. Europe will have to urgently switch to American liquefied gas, and Russia and China will have to urgently complete the Power of Siberia gas pipeline.

An interesting question: what could be the Bandera “regime of internal trust”? The greatest chance to take real power after Poroshenko has a triumvirate Avakov - Turchinov - Yatsenyuk. The last of them just recently returned from America to Kiev, for sure, with the freshest instructions. This triumvirate is capable of both war and smaller meanness. This is a well-known fact, therefore, the person and Zitz-chairman of the “regime of trust” may be offered to someone else, for example, Yulia Tymoshenko, and this person will greatly regret it if he agrees.

On the December Maidan festivities, the Nazis of Azov, especially close to the chief of the Ministry of Internal Affairs Avakov, threw out the slogan: “Misha to Georgia, Petya to Gagauzia!” Actually, this is the program of the second phase of the revolution “hydrability” from Avakov - Turchinov - Yatsenyuk.

Uncertainty in this outlined scenario brings still the "unpredictability of Trump." President Trump, as it were, allowed the delivery of the Javelinov, signed the necessary documents, but how will he behave when new great events begin in Ukraine? But this question, as they say today, on the salary of Vladimir Putin's advisers.