The Fire Hammer of the Third Rome. Part of 1


Heavy artillery is a type of artillery that includes large-caliber guns designed to destroy fortifications and enemy troops behind closures. Heavy guns were intended for the destruction of long-term trenches, powerful defensive structures and for counter battery.

Heavy field artillery perfectly manifested itself during the agile stage of world war. And when the impossibility to achieve a solution during maneuverable military operations “buried” the belligerents into the ground - heavy field artillery became an indispensable tool, a “fire hammer” in breaking through the enemy's echeloned defense. During the positional hostilities, heavy artillery was particularly in demand.

World War I put forward the following range of tasks for heavy artillery:

Heavy artillery is strong in its caliber and heavy projectile weight, as well as the destructive effect of the latter and a greater range of fire — that is, its advantages consisted in “power” and “long range”. On the other hand, it is inactive - especially with very large calibers, as well as “capricious” in matters of ammunition. But the minuses paid off with the results obtained from the totality of the power and range of heavy artillery systems. The rate of heavy artillery in this period ranged between 4 - 8 shots per minute, which was considered satisfactory.

Speaking of mobility and maneuverability, it is worth noting that the ability of Russian heavy field artillery to actively move was tested in the Carpathians in February - March 1915 (Volosyany, Vyskov pass, Likhobori) - for example, when a heavy battery of the 3 of the Siberian rifle artillery brigade out into the valley of the river. Sivki. She did this at night (!), Crossing the Vyshkov Pass, passing along terrible mountain roads, only in some places patched with wooden flooring. Here, of course, the level of training of the personnel, the high moral qualities of the Russian artillerymen and the awareness of the enormous responsibility to the infantry played a role.

The key criteria for classifying a gun into the category of "heavy artillery" were: a) its functional purpose; b) a place in the structure of the Russian army. That is why the 122-mm light field howitzer along with the 76-mm field gun was part of the light field artillery. And the 107-mm cannon belonged to the "heavy artillery" (as well as the 120-mm cannon of the Obukhov factory system and the 120-mm French cannon that appeared during the war in the Russian army). 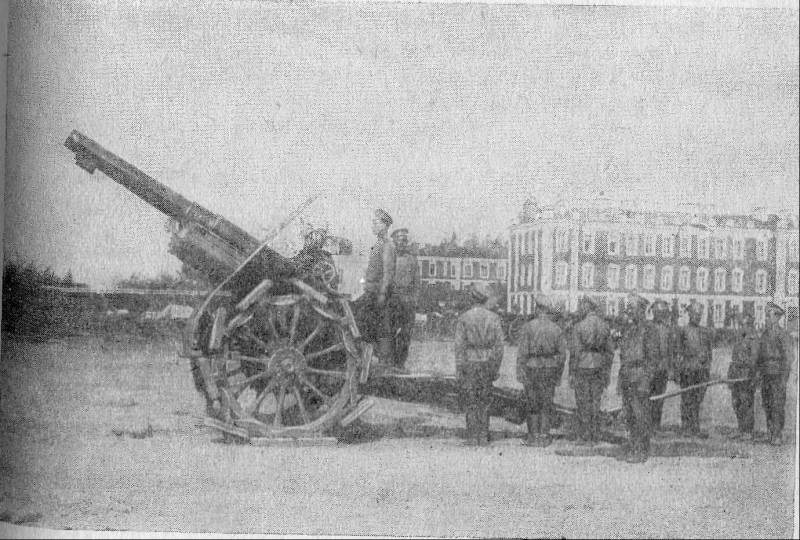 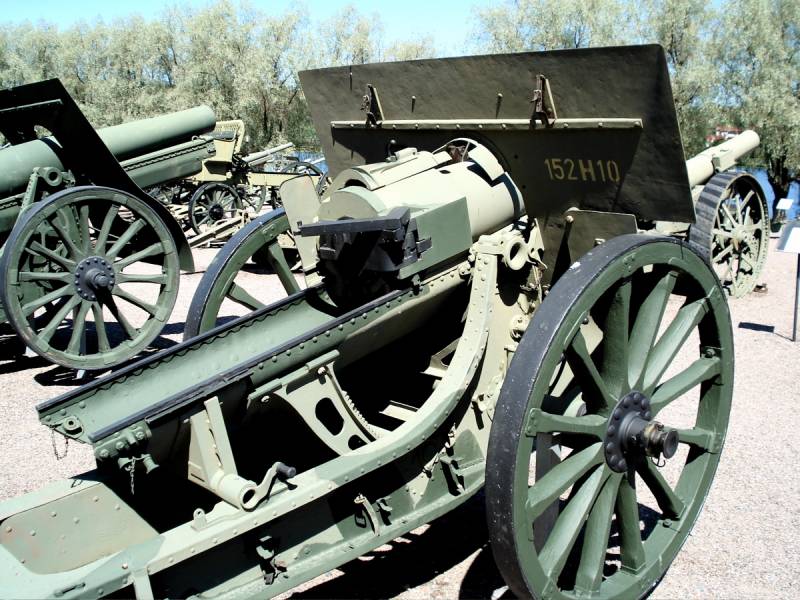 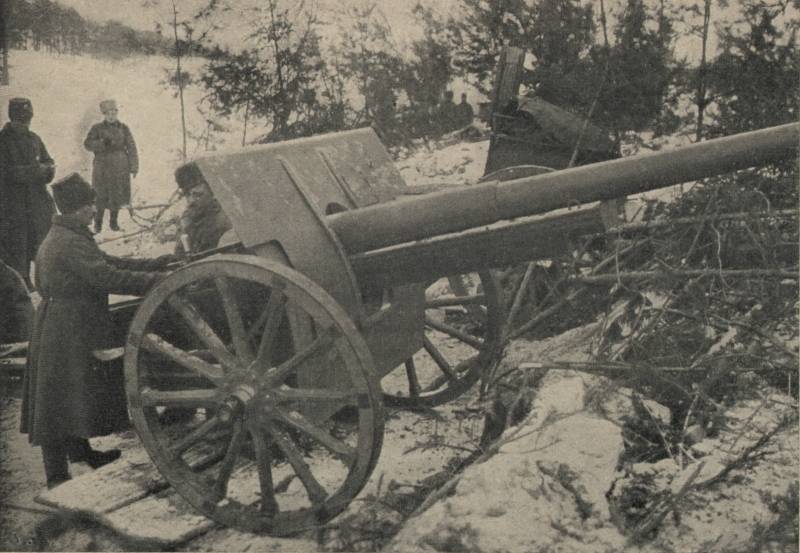 The fact that the main calibers for cannon and howitzers of field heavy artillery were adopted - for 4,2 inch guns (42-linear field guns), and for the howitzer - 6 inches (152-mm howitzer) - it was not accidental. Both guns were easily transported by 8 horses. Only the charging box carried by the entire 6 horses was not mobile enough. And in a combat situation, the box almost always lagged behind the gun. Sometimes it was necessary, to speed up the mobility of the charging boxes, to harness "civilian" horses towards them. Since both systems were equipped with automatic devices for rollback and roll up of the gun, as well as modern sighting devices, they were quite rapid. Thus, the battery under the command of Captain Sokolov, part of the 1 heavy artillery brigade, during the battles at Angerburg (East Prussia) showed: for a cannon - up to 9 shots, and for a howitzer - up to 4 shots per minute. The experience of firing peacetime peacetime, during the testing of these guns in 1914, showed the following indicators - for the 10 gun, and for the howitzer - 6 shots per minute. But, of course, test site conditions were significantly different from combat conditions.

The classification of heavy artillery that existed before the war — and which subdivided heavy artillery into “field” and “siege” —was also important. Russian artillery had in 1910 - 1913's. to endure repeated reorganizations until the heavy artillery reached the structure that took place during the First World War. During the latter years, heavy artillery became subdivided into “maneuverable” and “positional” - however, this functional division was rather arbitrary.

The above guns belonged to "maneuverable" or "mobile" heavy artillery.

T. n. Positional heavy artillery differed from it in that it did not have its own standard means of transportation, moving from one sector of the front to another as necessary. In contrast to the more unified on the gun park and the organizational structure of the maneuverable artillery, positional artillery was characterized by a greater "variegated". For the formation of positional artillery was used artillery, consisting of siege, serfs, coastal and even naval guns. The guns were transported, as a rule, by narrow-gauge railways, by good highways and for short distances - by dry and wide unpaved roads (if they were operational and had very strong bridges). The ability of such tools to move was largely dependent on their caliber, the state of the soil, and, consequently, the time of year. The speed of movement on tractors on good highways - 5 km / h (at higher speeds the material part suffered).

Positioning the positioning tools was prescribed in groups of at least 2 units - the complexity of the mechanism sometimes caused the tool to break, which could affect the execution of the task. Thus, the rupture of an 11-inch howitzer on the left flank of the 49 Corps deprived Russian troops of serious fire support on the crucial day of 18 June 1917 - the first day of the June offensive of the South-Western Front. This episode was very unpleasant - after all, the howitzer was supposed to destroy the enemy’s concrete observation post at the height of the villages. Years. As a result, the observation point of the commander of the 11 Army General of Infantry D. V. Balanin called “Volga”, located in 3 km from the front line of the enemy, was under continuous enemy fire observation. Every 5 minutes, a line of 4 projectiles of various types exploded next to it - and in the evening the enemy damaged the right embrasure of the observation post.

The formation of positional heavy artillery began with the allies for the 1915 summer by, and in the Russian army by the end of 1915. To install the positional guns it took 20 minutes (8-inch Vickers gun) to 7 days (10-inch coastal gun) and special cranes and other mechanisms.

Positional artillery was designed: a) to fire the most important targets in the enemy's rear (warehouses, headquarters, bridges, intersections of roads, etc.), to combat large-caliber and long-range artillery (Kane’s cannon was most actively used); 6) For destruction and shelling of important railway stations, communications centers and large military depots (used long-range 2-inch coastal gun with a range of almost 10 km and 20-mm Vickers gun - with a range of more than 120 km); 13) For the destruction of very strong structures and especially important fortified sites and sites (used 3- and 9-inch coastal artillery howitzers, 11-inch Vickers howitzer, Schneider’s 9-inch howitzer and other tools); 11) for the destruction of solid structures and especially fortified trenches - used 4-inch guns. 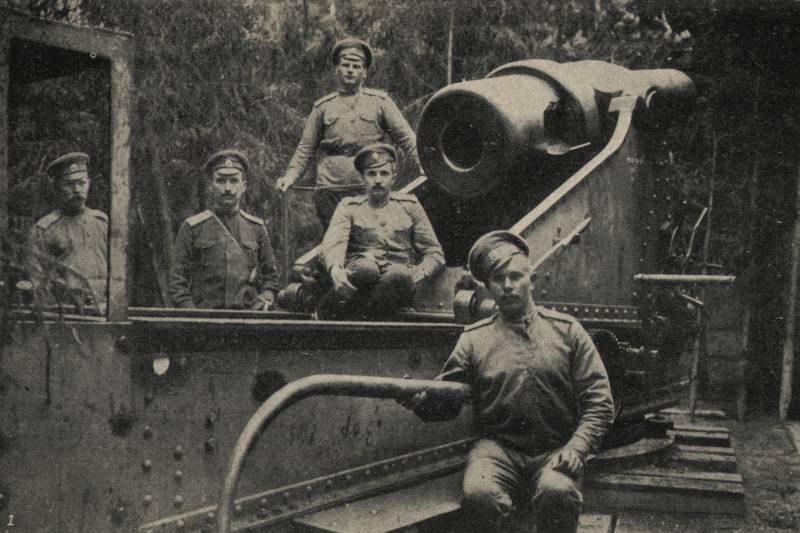 Ctrl Enter
Noticed oshЫbku Highlight text and press. Ctrl + Enter
We are
Reports from the militia of New Russia for 27-28 September 2014 of the yearAutomatic guns for armored combat vehicles. Point of view of a Western specialist
24 comments
Information
Dear reader, to leave comments on the publication, you must to register.