April 12 2012
19
Anton Ivanovich Denikin - a noble officer who remained loyal to Tsarist Russia, or the leader of an unbridled gang of marauders? Today, there are adherents of both that and this point of view. Rate historical the personality that Denikin is without a doubt follows, given the most varied facts and characteristics. The character of this outstanding personality can be understood only by turning to the path of life that he had to go through. The complex life of a person who is strong and certainly talented, rich in both tragic and bright events, deserves the attention of posterity. 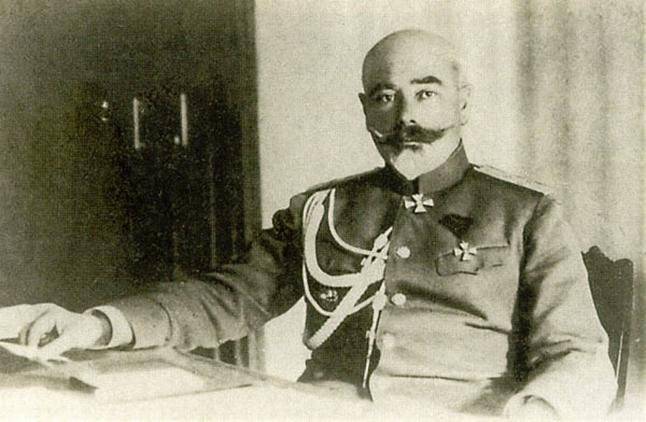 A white officer was born in the village of Shpetal Dolny in the Warsaw province 4 December 1872. The Denikin family, although related to military families, lived in poverty. His mother, Elizabeth Franciskovna, practically did not express herself in Russian, since she was a pure-blooded Polish woman, and her father had no noble origin. Ivan Efimovich, that was the name of the father of the future leader of the white movement, was a serf who was recruited and promoted to the rank of major. Despite the "proletarian" origin, the orders in the family were very refined and strict. Since childhood, the boy was inculcated with a sense of dignity, honor and responsibility. Ivan Efimovich professed Orthodoxy, while his wife was a Catholic. Little Anton was introduced more to the Russian church, but occasionally he attended the church. The boy grew up talented and lively, at the age of four he read well, and at nine he entered the Vlotslavskoe real school.

In 1885, Major Denikin passed away, and his relatives found themselves in very cramped financial conditions. The already small monthly pension for which the family existed has drastically decreased. Anton Ivanovich by that time turned 13 years, but already at such an early age he showed his best qualities. The young man took upon himself the burden of keeping his relatives and began giving paid lessons. Soon the diligent and out of age reasonable student noticed. In 15 years he was assigned student allowance, and also granted the right to live in a special apartment, together with peers. The responsible young man quickly gained credibility and was appointed a senior student in the dormitory. The fate of Denikin from an early age made him be strong and fight for well-being.

The atmosphere in the Denikins family reigned patriotic. My father spent most of his life in real service and from an early age instilled in his son love and respect for the Russian army. The dream of a young man soon came true. Immediately after the end of the Lovitsky Real School, Denikin was enlisted in the first rifle regiment as a volunteer and lived in the barracks for several months. However, a military career without appropriate training in Russia was impossible, especially for a person who had no noble origin. In July, Denikin entered the Kiev Junker School, graduating in 1892 with the rank of second lieutenant. In the same year, Anton Ivanovich met his future wife, Xenia, who was only a few weeks old at the time. Denikin met her father under very curious circumstances, after killing the boar who had driven the venerable Vasily Chizh to a tree. After the “salvation”, Anton Ivanovich became a family friend and even attended Xenia’s christenings.

In 1895, Denikin entered the Academy of the General Staff, but was expelled in his first year for academic debts. The hardness of character manifested itself at this stage in the life of the young officer — he again passed the entrance tests. 1899, Anton Ivanovich gets the rank of captain. A diligent and talented graduate was supposed to be enrolled in the General Staff, but some General Sukhotin changed the lists on his own initiative. Denikin complained about the general, and Sukhotin’s actions were declared illegal, but the impudent officer was not credited with the Headquarters.

In addition to abilities in military science, Denikin also possessed a literary gift. In his youth, he wrote poetry, but after that he preferred prose. His works Anton Ivanovich devoted to questions of army life. His first creations saw the light through the Warsaw Diary and Scout journals. The critics' literary ability was appreciated, but the command was wary of the thinking officer. Most of the problems that Denikin affected in his works were unpleasant for the commanding staff and aroused the keen interest of the public. Anton Ivanovich wrote all his life, especially his works became popular in the West. Each line of his writings is imbued with genuine love of country and rejection of the communist system. 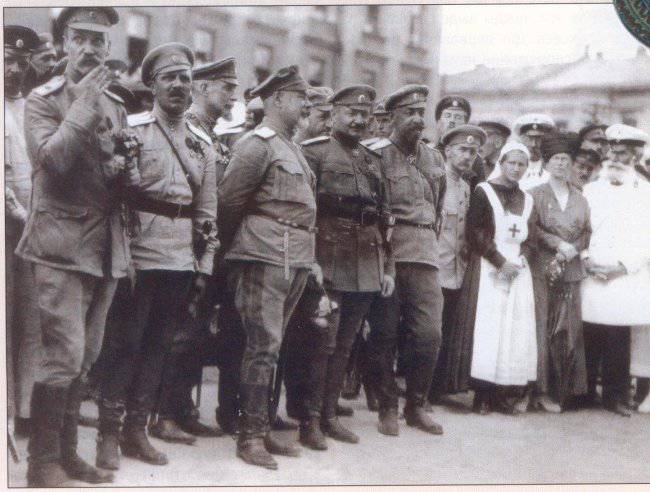 Friendship with Kuropatkin allowed Denikin to finally get to headquarters. The officer, who said that he was not looking for mercy, still actively used connections to move up the career ladder. Since 1902, Anton Ivanovich is one of the staff officers and receives not a small pension. Young, full of strength, Denikin sought to win awards and honor in real battles. Despite the slight injuries caused by falling from a horse, Anton Ivanovich goes to the front of the Russian-Japanese war. The first experience of the battles was obtained in clashes with the Chinese brigands, as the border brigade entrusted to Denikin was in the rear. However, October 28 in the rank of lieutenant colonel Anton Ivanovich sent to the Cossack division under the command of Rennekampf. While serving as chief of staff, Denikin participated in the Tsinkhechensky battle, where, under his leadership, one of the hills was repelled in a bayonet attack. This was followed by active and successful reconnaissance actions, as well as a clash with the Japanese at the Vancelin pass, the Mukden battle, and other effective operations. The command highly appreciated the merits of the brave commander, and from the war Denikin returned as a colonel who was awarded the Order of St. Anna 2 degree with swords, as well as St. Stanislav with bows and swords.

A further career has been quite successful, but the merit of career advancement belongs exclusively to Denikin himself. After the war, he spent a long time in a lower position at the headquarters of the second cavalry corps, awaiting an acceptable appointment. During this period he visited Europe. Anton Ivanovich was distinguished by astonishing self-control and perseverance, he was not afraid to give up his post as chief of staff of the Eighth Siberian Division and received the desired appointment to the Kazan Military District. The ability to wait and demand more than once helped Denikin to take a worthy place in the hierarchy of military officials. The conduct of the post of Chief of Staff of the Reserve Infantry Brigade in Saratov No. 57 is evaluated by researchers in different ways. During this period, Anton Ivanovich was actively writing to the journals, and his work contained sharp criticism of not only the existing orders in the army, but also contained clear "injections" addressed to the immediate commander, General Sandetsky. Life-filled with events and appointments shows us Denikin as an active and purposeful person. Anton Ivanovich openly expressed his political views, defiant in his youth, he softened somewhat in his mature age, but did not give up his convictions. 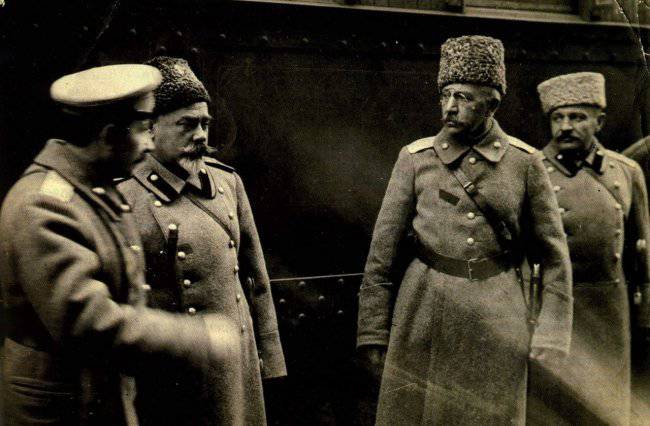 In 1914, Denikin arrives in Kiev in connection with his appointment to the post of general on instructions at the headquarters of the Commander in the Kiev Military District. By the beginning of the First World War, he received the rank of Major General and served under the command of Brusilov. Again, Denikin wrote a petition for his transfer to the line service and sent to the front. Almost immediately, Anton Ivanovich conducted a successful attack from Grodek, for which he was marked by Georgievsky weapons. The command of the Iron Brigade was so productive that soon the brave commander was awarded the Order of St. George 4 degree. In September, 1915, for taking Lutsk, he was promoted to lieutenant general, even a wound in the arm did not force Denikin to return to the rear. For the secondary capture of Lutsk, he was again granted a George’s own weapon adorned with diamonds and a special engraving. From September 1916 to 1917, Denikin commanded the Russians of the Eighth Corps on the Romanian front. For his services to Romania, he is awarded the highest military award by the Order of Mihai the Brave of the third degree.

The February Revolution interrupted Anton Ivanovich's glorious feats of arms, as it was caused by the new Minister Guchkov. After a long conversation, he was appointed chief of staff at the new Supreme Commander. Alekseev's displacement and the arrival in his place of Brusilov Denikin met tensely. The rejection of political change was reflected in the refusal of the post. For a sharp statement in support of General Kornilov, Denikin was arrested and thrown into Bykhov prison as a supporter of the rebellion. Together with Kornilov, he soon escaped under the name of Dombrowski. Combat experience made Denikin an authoritative figure in the military-political arena; in June 1918, he became the head of the Volunteer Army, numbering about 9000 people. The white general moved his troops to Yekaterinodar, and thanks to his knowledge, he was able to smash the Kuban grouping. By early next year, Denikin controlled the northern territory of the Caucasus, as well as the Kuban and the Don. Using political connections, he receives impressive assistance from members of the Entente, which largely determined the success of offensive operations.

In January, 1919, the Denikin Volunteer Army merged with the Don military forces, and Anton Ivanovich became the commander of the Armed Forces of Southern Russia. Researchers of personal correspondence and diaries of this extraordinary and strong person indicate that, despite the importance of the position, Anton Ivanovich was not happy with her. Being a successful commander-in-chief, he did not strive for sole authority, but rather feared it. Perhaps that is why in June 1919 he recognized the power of Kolchak. However, there are other points of view. For example, some historians prove the Nizhneudinsky decree of Kolchak 1920 of the year to prove the opposite, in which he confirms the possibility of transferring all the power to Denikin. The commander himself, in his memoirs, confesses that he would have refused sole authority. Historians explain the failure of the White Army, Denikin’s miscalculations in the area of ​​discipline, as well as an insufficient assessment of the forces and capabilities of the enemy. 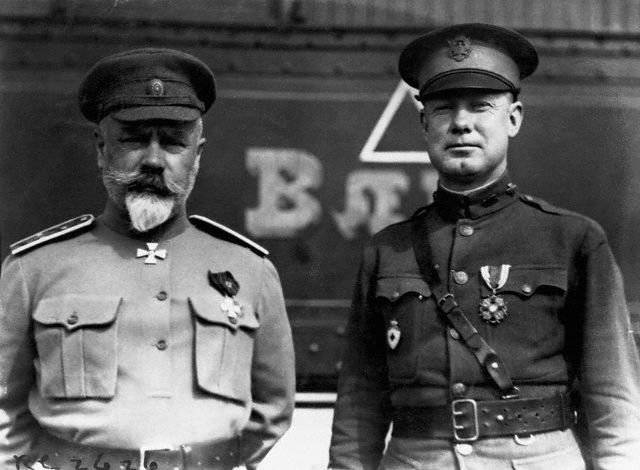 By April, 1920, relations with the opposition are coming to a head, and Denikin is leaving for England, handing over his post to Wrangel. Despite his long tenure as commander-in-chief, Anton Ivanovich is practically deprived of his means of livelihood. In exile, he refuses to support Churchill and the aristocratic English circles, promising large financial injections. A few months later the white general departed for France. His life in emigration was modest, he lived a subsistence economy, but still closely followed the situation in Russia, leaving no hope of return. During the years of the fascist occupation, he refused to assist the Third Reich, sincerely rejoicing at the successes of the Soviet army. In the postwar years, Denikin arrived in the United States, where he was received very coldly, since the USSR was officially considered an ally, and the disgraced general was perceived as a provocateur and even an enemy.

Anton Ivanovich’s diaries, letters and memoirs testify to his sincerity in serving Russia. Perhaps the historical truth and power turned against his ideological convictions, but he remained true to his ideals of patriotism and officer duty. Denikin called the fight against the Soviets a personal spiritual confrontation, and considered only Russia as his motherland.