"Belching flames." Flamethrower of the First World War. Part of 2

December 29 2017
17
The fuel was emitted under the pressure of gas (in Grof - 17 atmospheres, in Vex and Kleif - 25 atmospheres). Nitrogen for flame throwers was stored either in steel bottles with a capacity of 13,5 liters, or in small bottles - according to 2 liters. The bottles with nitrogen were painted by the Germans in a light green color - to distinguish them from other gases.


Gas was injected into the apparatuses filled with a mixture by a metal articulated tube equipped with a pressure gauge for measuring pressure. This tube had a safety valve.

After the use of flamethrowers, they were cleaned with raw benzene, blown and wiped.

In the first flamethrowers, ignition was carried out when a jet passed over a burning torch soaked in the same composition. Later a special powder igniter was invented. 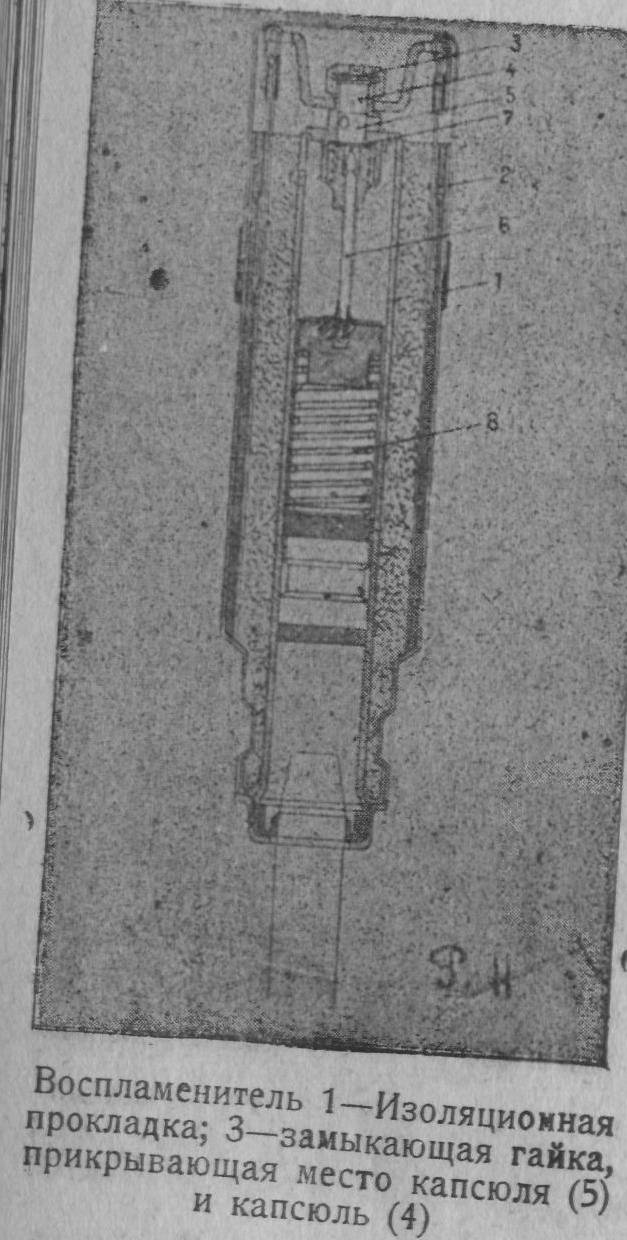 The fire jet was produced as one continuous, or as a series of “shots” (the flamethrower quickly opened and closed the edges of the hose, leaving it open for about a second). The jet ejected under full pressure when lifting the hoses up was called an arc - it could hit targets behind closures and for a greater distance. A series of shots was more effective than one continuous jet. But “Grof” was envisaged only to pour fire left and right — this was called “comb cutting”.

Flamethrower Application weapons required thorough technical and special training, knowledge of the material part, endurance and composure. The flamethrower had to do his work in any situation in cold blood, without paying attention to the environment, to continuously monitor the equipment, its work, the readings of pressure gauges, etc.

It was not for nothing that Emperor Wilhelm II assigned to flame-throwing units, in addition to being credited as a guard (which was very prestigious and honorable), a special emblem: Adam's head on the sleeve is a sign of immortality and fatal damage inflicted on the enemy.

All the fighters of calculation must have the same training - so that each of them can replace a disabled comrade without stopping the action of the flamethrower.

As a combat unit, a group of at least two branches was used, with the addition of several grenade throwers — grenadiers. Composition - 13 man (2 flamethrower unit and a group of grenadiers).

The grenadiers maintained the pace of the battle during the breaks when replacing the forward branch (spent or incapacitated) with the second (spare) one.

Flamethrowers were accustomed to do their work without noise and talk, day and night, carefully and carefully, without losing tools, in gas masks, crawling, overcoming obstacles and obstacles, dispensing with commands, acting on conventional signs. 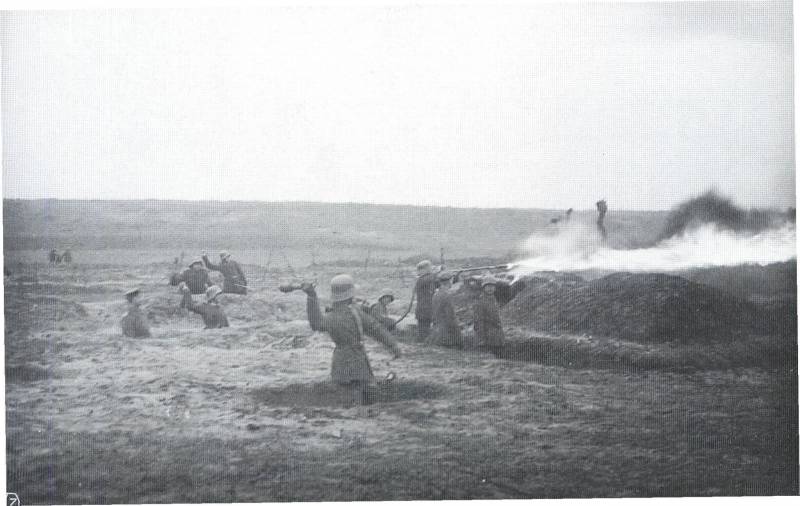 Training calculation flamethrower "Kleif" from the Guards Reserve Pioneer Regiment, 1917, the Grenadiers work out the interaction with flamethrowers. Photos from the book. Thomas Wictor Flamethrower Troops of World War I., 2010

The strength of individual platoons depended on combat missions and varied, but it was recommended to avoid moving people across different platoons.

During the preparation and conduct of the attack, the company suffered the following losses: when carrying flamethrowers on the night of June 1 - 2 killed and 4 injured, when installing flamethrowers - 5 poisoned with gases, while attacking - 1 killed and 3 injured. The loss of the enemy alone prisoners - 1014 people, including the commander of the regiment 2.

The flamethrower, as a melee weapon, was supposed to help the infantry capture the enemy's trenches, capture strongholds, and so on. The "Wex" could follow with infantry everywhere. Usually part of the flamethrower units was in front of the infantry - in order to break the resistance of the enemy and cover the infantry advancing from behind with smoke. These offices or unfolded on the front or dissected in depth. Flamethrowers operated against equipped areas of the enemy’s position and points on which stubborn resistance was expected.

The mass grouping of flamethrowers against the keys of the enemy’s position was more important than the uniform distribution of the attack front. The Veksov’s flame-throwing strike was sufficient to attack 200, the 400-meter section of the trenches.

The tactics used by the Germans of the Vex type flamethrowers, developed by them by the end of 1918, is interesting. It consisted in the combined actions of grenade throwers and flamethrowers attacking the enemy position under the cover of a smoke screen. Thanks to the latter, flamethrowers managed to approach the distance required for flamethrowing, and, suddenly opening fire, to bring panic into the ranks of the enemy.

But combat experience showed that courageous and experienced machine gunners could repel such combined attacks.

When installed in the “Grofa” position, they were placed in 50 - 60 meters from each other.

The terrain strongly influenced the course of the attack. The most favorable was considered to be rugged, covered with bushes (allowing you to go as unnoticed as possible to the enemy).

Flamethrowers before the offensive investigated the area on which to act, the message moves and the position of the enemy. The Germans even built campuses reproducing the attacked section of the enemy position.

Flamethrowers were very helpful for reconnaissance groups — especially the small Wex flamethrowers, which operated silently. The fiery jet forced the enemy to abandon resistance, which ensured the capture of prisoners (while hand grenades were uncomfortable in intelligence because of noise).

In reconnaissance, two Vex divisions were also usually identified. The fiery jet acted only when resistance was met. Going into the flank of a trench or a group of trenches, flamethrowers helped cut off the enemy from the rear and capture prisoners and trophies.

Stationary (trench) and backpack flame-throwers with defense were located in the trenches or in the funnels from the shells (taking into account the range of fire) - to achieve the formation of a solid fire wall.

High-explosive flame throwers were recognized most appropriately used to protect the approaches, placing them in a checkerboard pattern on those areas from which the enemy was directly threatened.

The Germans combined the use of flamethrowers in the defense with a counterattack, using the strong moral influence that this weapon produced on the enemy troops. Flamethrowers raised the spirit of their troops. But if the first attack failed, it was not recommended to repeat it in the same combat area.

The best means of repelling flame-throwing attacks, as already noted, was accurate fire from machine guns and rifles, as well as the skillful use of rifle and hand grenades. It was very important not to allow the enemy flamethrowers to reach the trenches, and in the event of an offensive, to detect their positions in a timely manner and destroy them with artillery or mortar fire.

When detecting the positions of stationary (trench) flamethrowers, the latter were attacked from the rear or from the flank - it was not possible to use these flamethrowers for circular fire.

And Russian tactical instructions from the First World War - what recommendations did they give regarding the use of flamethrower weapons?

They also noted that they differ: 1) Heavy flamethrowers (of high power), which, due to their weight, cannot be easily moved from place to place and, because of this, can only serve in positional warfare as an exclusive weapon of defense. either an important point; 2) Portable flamethrowers (medium power), which had a lower weight than the previous type, but still require a certain number of people to move - they are mainly defense weapons and are adapted to transfer during the battlefield from place to place along the position, although they can to be used when going on the offensive (for which they can be advanced into the starting trenches for attack or even closer); 3) Wearable (low power) flamethrowers of backpack type, which are easily carried on the back by one person, therefore, can be used in any combat situation.

Heavy and portable flamethrowers had a range of up to 75 - 100 steps at a burning time of 30 - 45 seconds. When installing them, it is necessary to create appropriate shelters and provide for masking. Despite the weight, it is desirable that flamethrowers maneuver. It was pointed out the need to have spare positions, to take measures to store the fire mixture.

Flamethrowers should be checked and charged regularly.

Wearable flamethrowers - as an excellent antistimulator tool (in defense), and a weapon preceding (in the offensive) bayonet combat.

In defense, flamethrowers pre-occupied these positions. When the enemy moves closer to 20, the burning jets strike its battle formations.

Throughout the distance of the flamethrower on the ground, the fire is mixed. And outside the fire jet, the flamethrower effect extends another step to 10 — a high temperature intolerable by man is formed in this space.

The action of flame throwers, besides the immediate withdrawal of people from the system, is characterized by the effect of having the very fact of the presence of fire and smoke — making a strong moral impression on the enemy, creating disorder and confusion in his ranks. This should take advantage of their troops.

Finally, a flamethrower should vigilantly ensure that he does not pour it on with his mixture. In the case of clothing ignition, each person who has lit up must firmly remember that those around him can save him only if he immediately falls to the ground. A flame-thrower that caught fire should, first of all, get rid of his weapon, and the others, without losing a single minute, should cover the fire with a tarpaulin, overcoats, tent panels, etc., and if there are fire extinguishers, use them.

All of the above was of practical importance - and with skillful use of a flamethrower, it became a formidable weapon of the battlefield of the First World War. 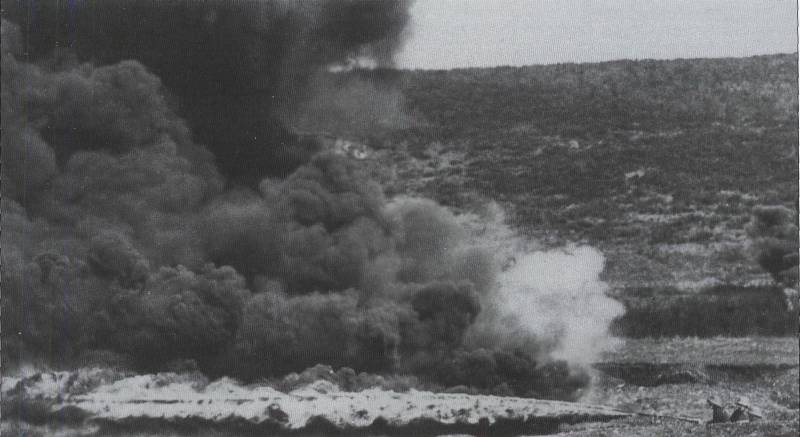