The City of Knights and Porcelain: A Date With Meissen (Part 2)

December 28 2017
34
Here it is necessary to recall a little about the genesis of the effigy itself and their exceptional importance for stories. Effigii are tombstones of the deceased, sometimes bulky, lying, sometimes bulky standing. The most famous effigiya is the figure of the “Black Prince” buried in the Canterbury Cathedral in England. Since a huge amount of armor has not been preserved, the effigy is the only thing that allows us to know exactly how the armor of this or that century looked and to trace their development in detail, since all the burials were dated. Over time, the figures ceased to do and replaced them with flat brass plates with engraving - breaststroke. But they were also refused in favor of flat carving on stone. Naturally, in addition to portrait resemblance to the departed, effigy very accurately conveys all the details of military equipment of those years, and they, in turn, are checked by samples that have come down to us. weapons and armor. 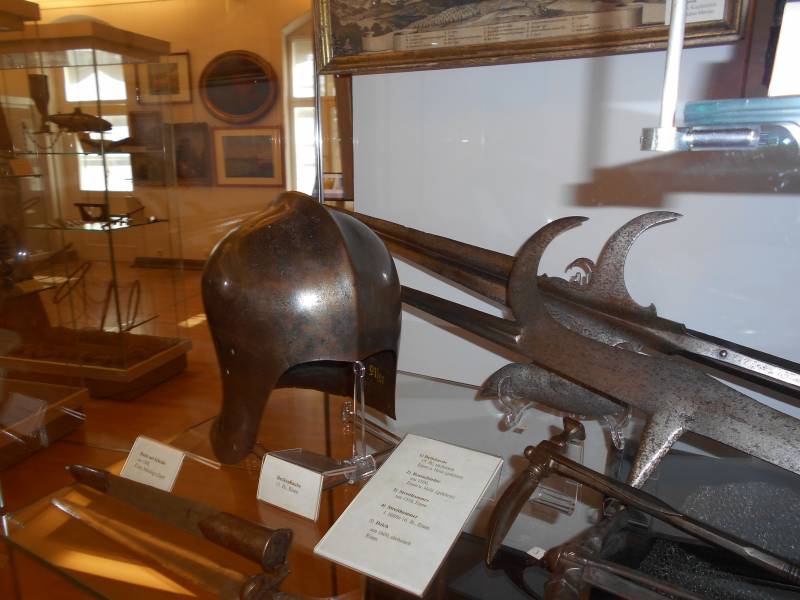 In this window we see one of the obvious reasons why knight armor became smooth. With such corsets, guizarmas, halberds, and “kolchuzhnik” glafs, it was easy to catch and throw off your horse! That is why, over time, if they used the chainmail with “white armor”, it was only as an additional protection: under the arms, cut out of it “underwear”, or used as a “skirt”.

For example, the memorial plaque of Sir Humphrey Stanley in Westminster Abbey 1505 of the year depicts him in a chain mail skirt, that is, at that time in England such armor was still worn! Moreover, on the “board” of Ralph Verni 1547, from Oldbury, Hertfordshire, we see on him the exact same “skirt” and the plate of Tassets suspended from the front, as well as the cloak - tabar worn over the armor. All this is very valuable historical evidence that the process of improving the armor, of course, was going, but it was rather slow, sometimes with unexpected jerks, but on the whole was not a quick matter! 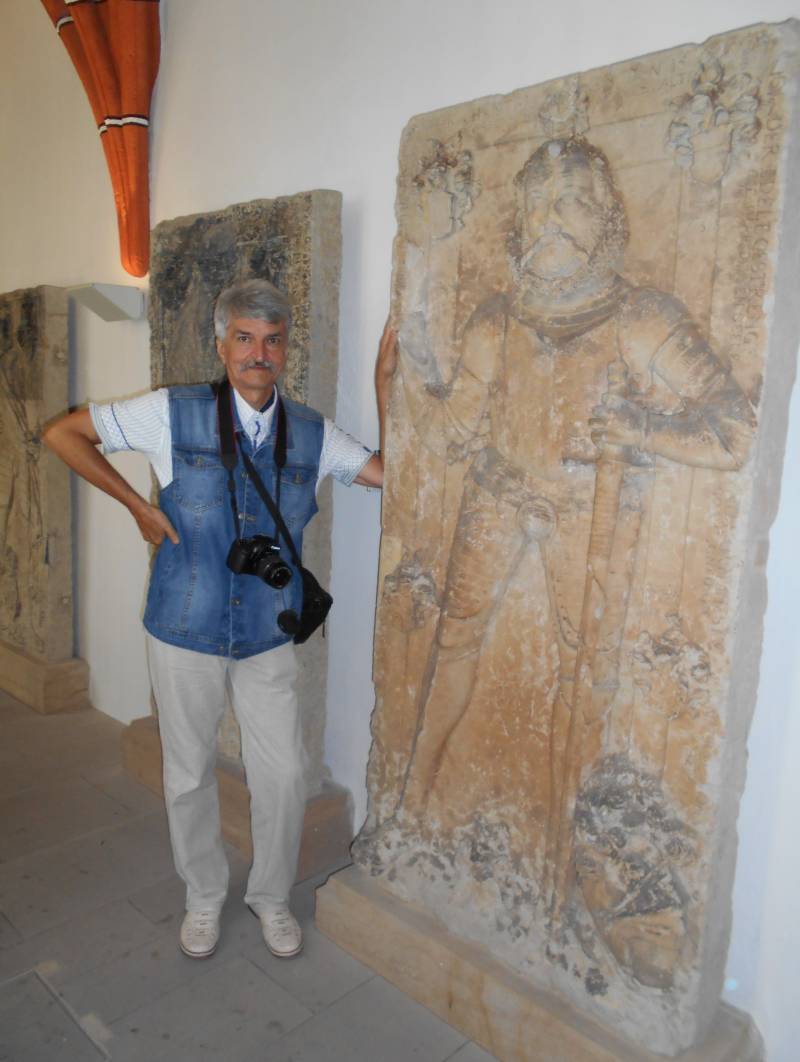 Usually I do not put photos of my person in the described places, but in this case, it turned out that this can not be done, because the scale of these tombstones needs to be shown. With my height in 176, it is obvious that, firstly, the proportions of the figure of the figure and, in particular, the faces of the sculptor were violated, and, secondly, they did not stint on the slab of the deceased! 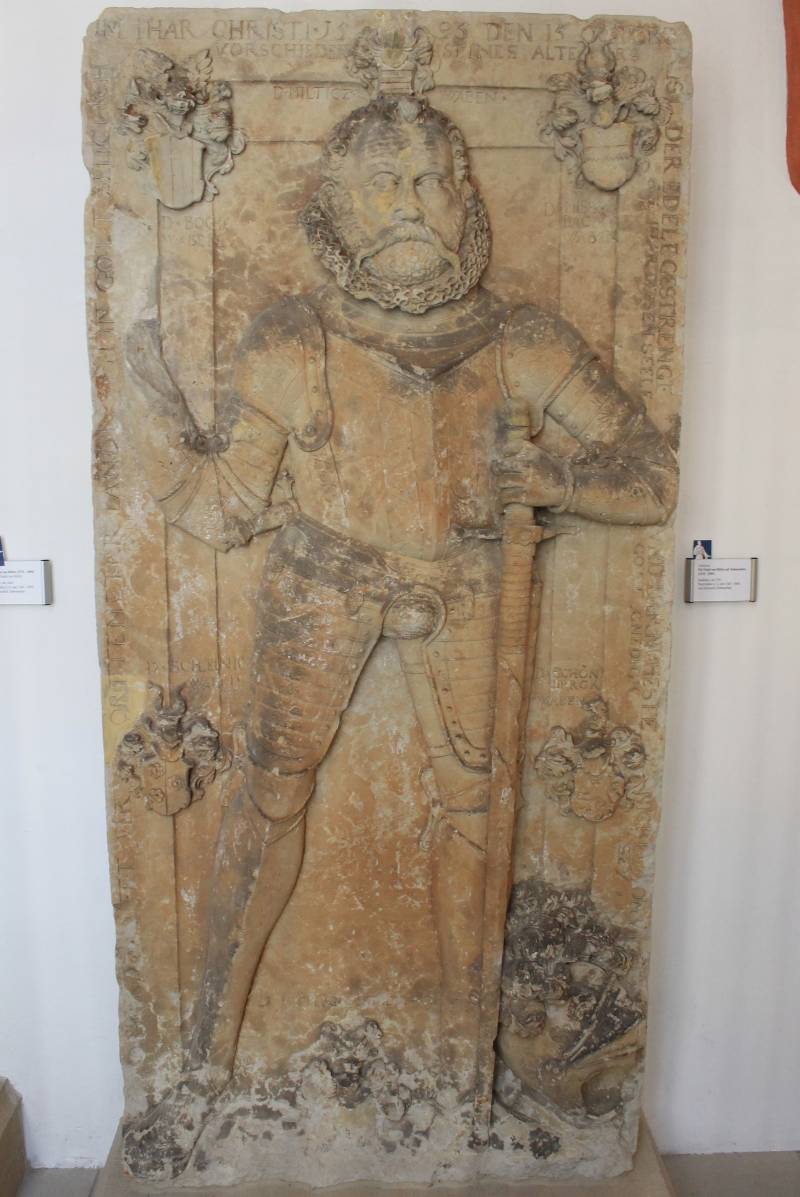 Here he is this handsome man in full growth! That is, it is obvious that somewhere around 1595, in Saxony, such armor existed. The codpiece is quite moderate in size, and there is no “skirt” here. Instead, lamellar thighs, covering the hips only in front. The armor on it is not cheap - chased with patterns both on the cuirass on the vertical stripes and on the armor plates on the hands. Since chasing increased the cost of armor at times, it is obvious that the deceased was a very wealthy man. 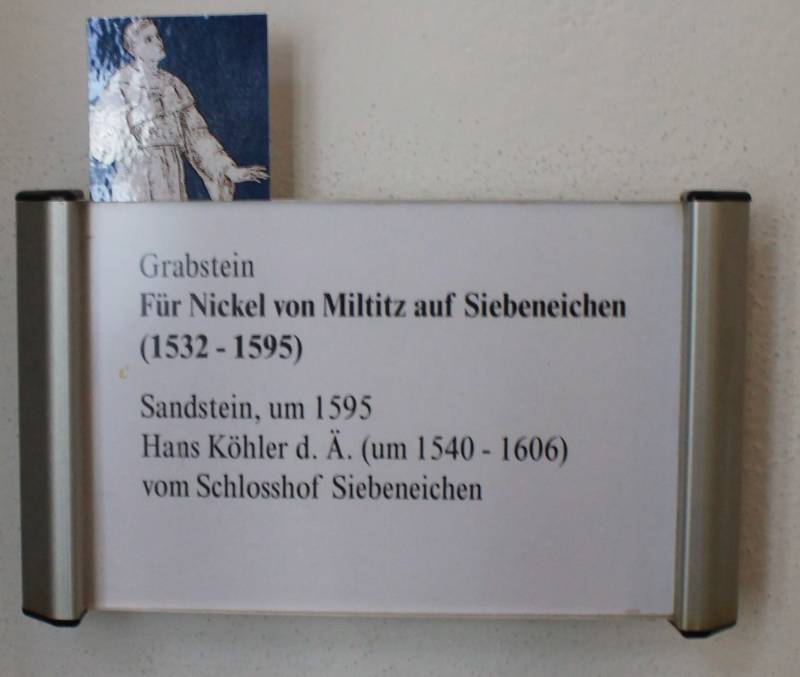 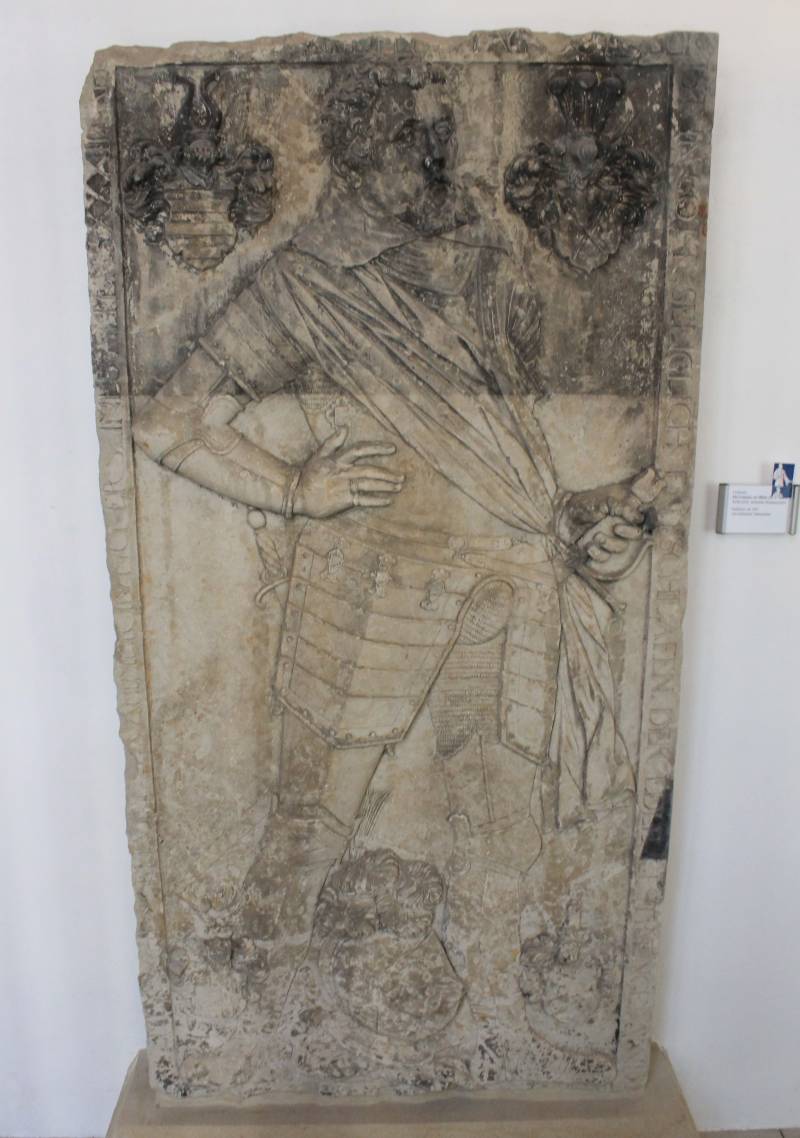 This effigy was preserved worse, apparently, part of it was wet in the rain. But on the other hand, we see a boss in front of us, though not a big one (a scarf over his shoulder!), A camunker. Faceted gothic leggings. But the fly of the chain mail, and moreover, after a closer look, we will see that it is just wearing chain mail breeches. And if so, then they could not be on the bottom, and worn over the boss. Needless to say, the chamberkeeper cared about his father's inheritance, cared ... Under his arms he also sees chainmail, that is, the enemy cannot reach him! And two more interesting details. The first is that he has the exact same dagger as in the photo from the first part - with a crosshair ring! The second - on the fingers of the right hand two rings - on the ring and little finger. The helmet, decorated with feathers, was not very well preserved, but it is obvious that this arm is with a reinforced headrest. 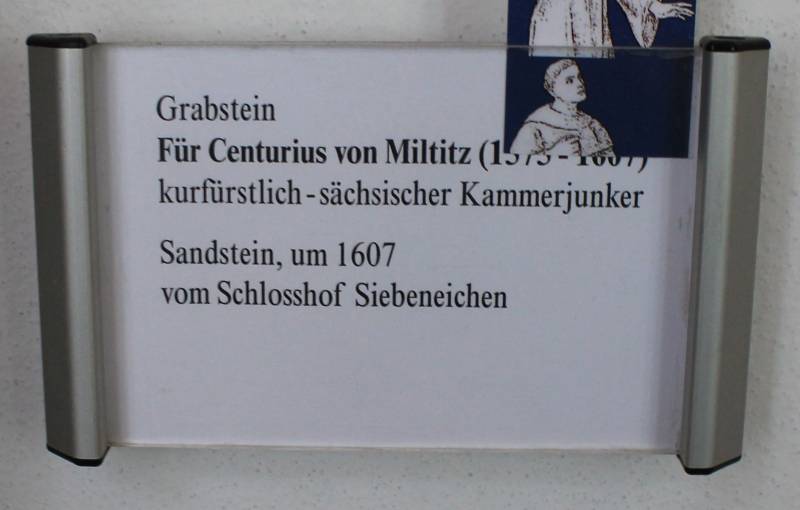 A label with information about this effect.

However, effigiyami lucky, it can be said, only in England. In France during the years of the French Revolution they were smashed, in Germany a lot of effigy were destroyed during the bombing. That is why so well-preserved and, moreover, dated effigiy of the museum in Meissen, of course, impressed me. By the way, there is another reason why effigy becomes unusable. Time and weather. After all, not always these tombstones and sculptures were under the roof. Limestone is easily destroyed by rains containing sulfur, that is, the relatively good preservation of Maysen effigy I was very pleased. 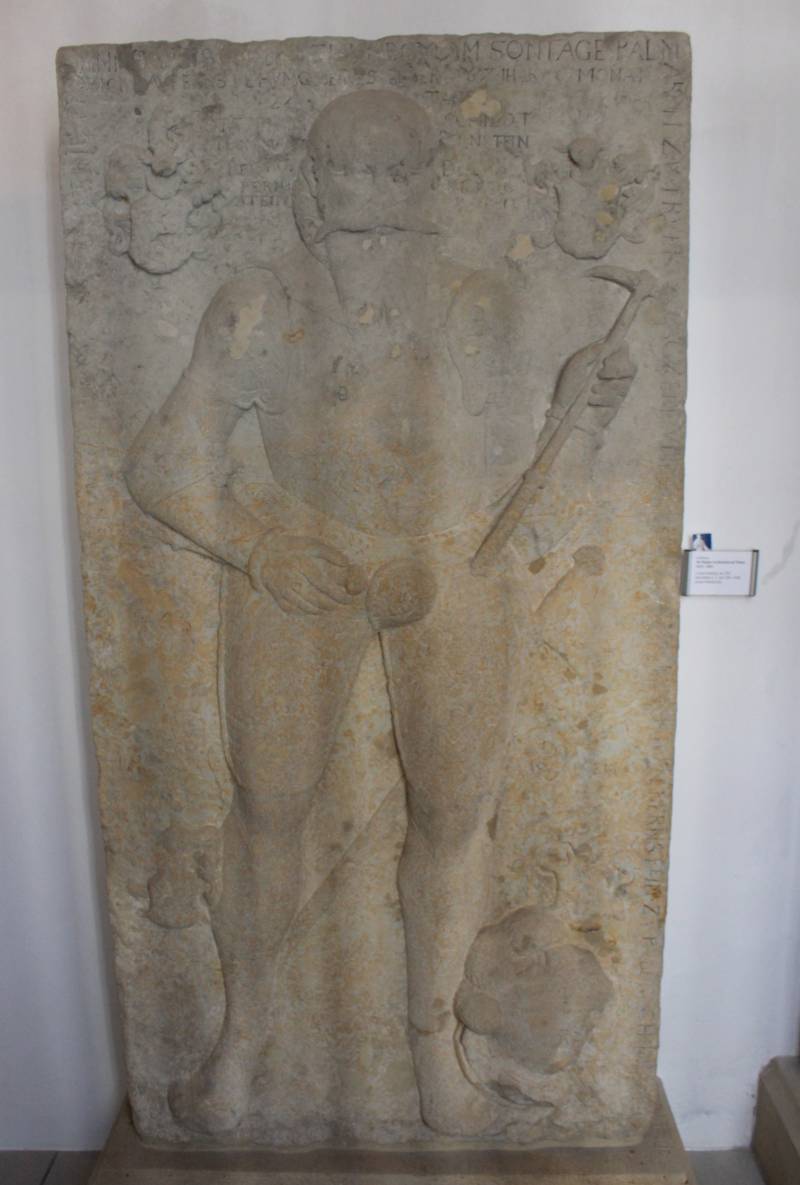 This effigy from the Meissen Museum, which I would also like to show here, was the worst preserved, but it is interesting because the person on it is depicted armed with the same stamp as the one shown in the photo in the first material, and secondly, obviously not German, but Italian, Milanese, globular-type armor. 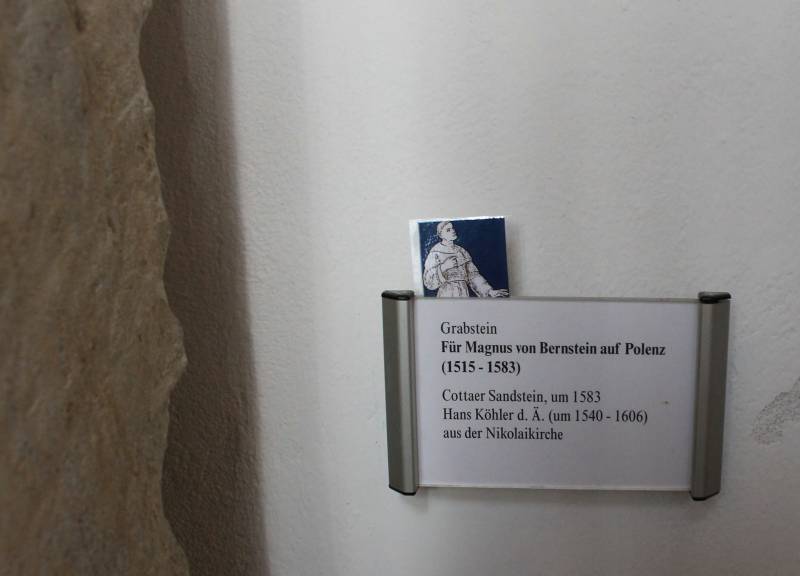 Signed to this effect. 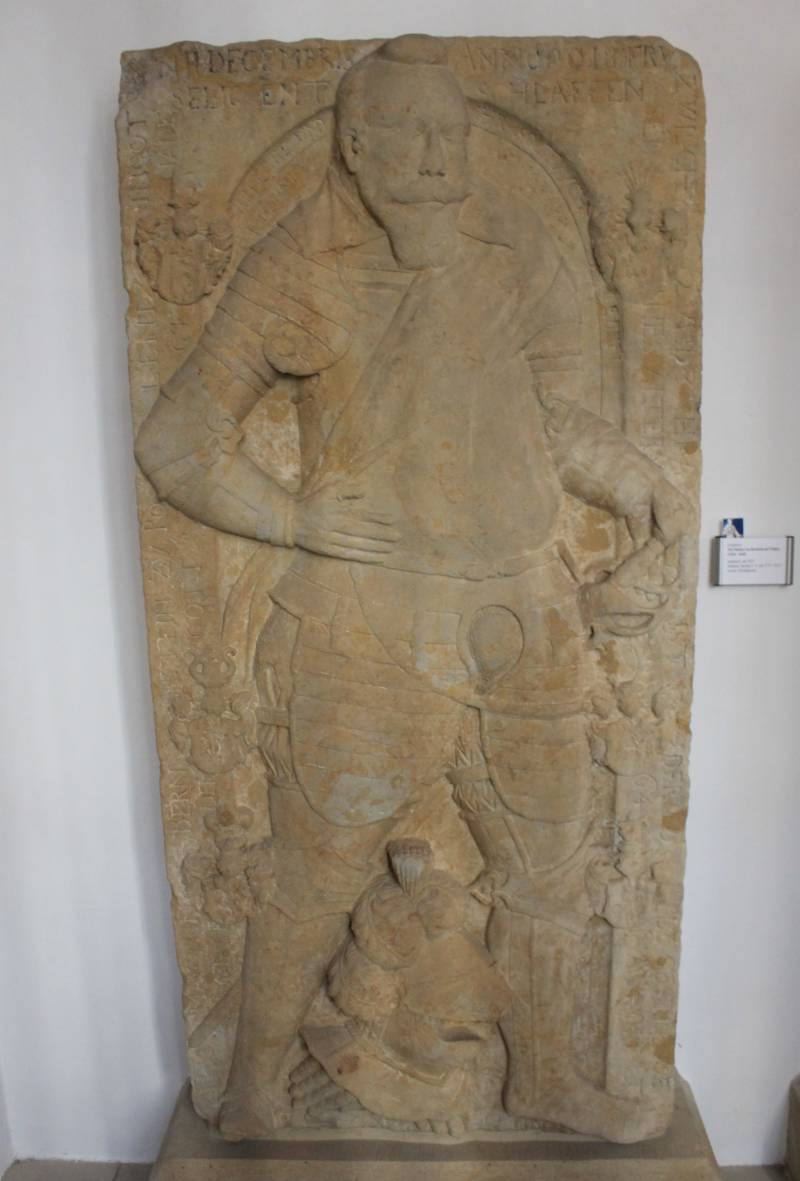 Well, in this case, the changes in the armor are noticeable even to the unprepared look. And it's understandable, because a man died in 1621 year. Legguards are clearly not Gothic, and under them are lush, with puffs and slits pants. And he is armed no longer with a sword, but with a cavalry sword with a developed crosshair. And nevertheless, if you look closely, you will notice that under the armor he is wearing the same chainmail with teeth on the hem and this is it, and not the tapule, is visible in the slot between the front tasets. By the way, look at the collar over the armor. It is simple, not laced, so there is clearly a severe Lutheran before us. 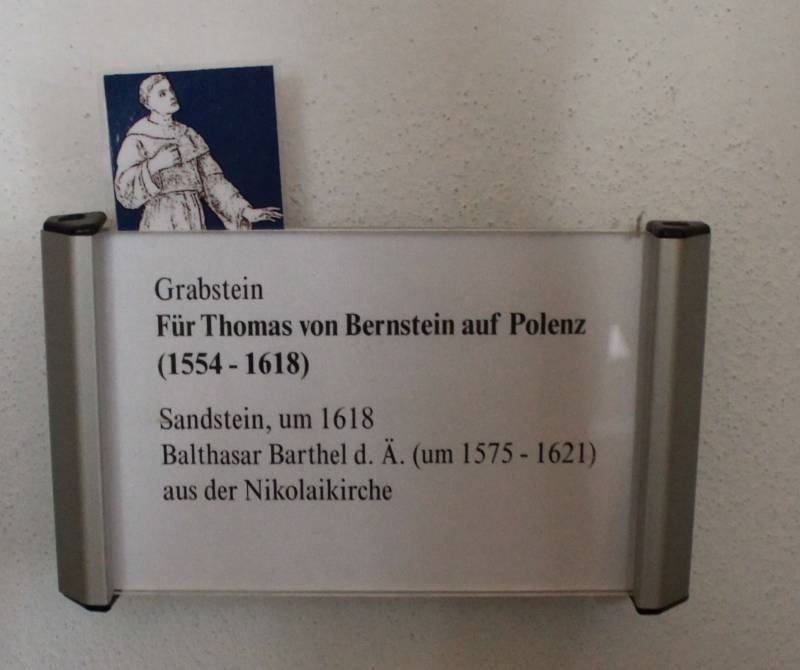 Signed to this effect.

“How to get to the castle?” We asked the hospitable Pole and received the answer: - “Go higher and higher and you will not be mistaken!” And we went, and neither the castle nor the cathedral were practically visible from below. Houses are high! And the no further up, the higher they are. This area of ​​Meissen, by the way, is called “Freiheit”, which means “free from taxes”. 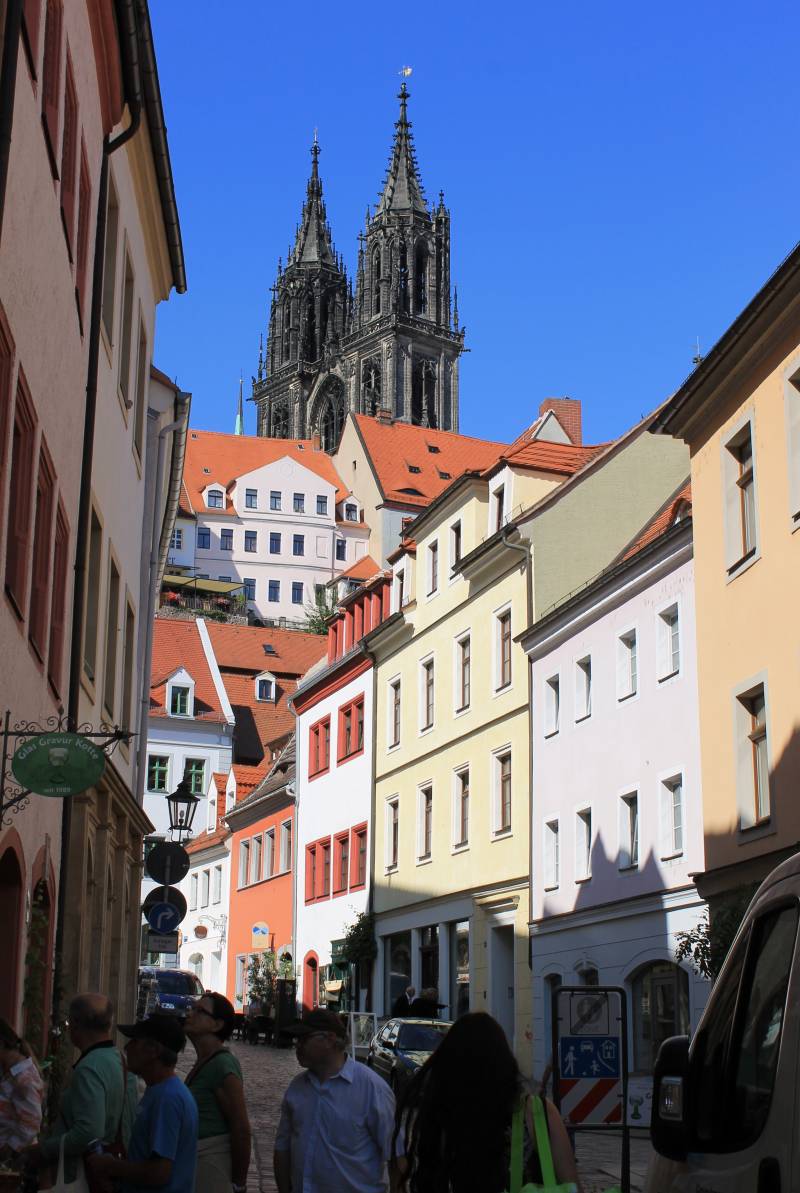 So from one of the streets you can see the spiers of the Maysen Cathedral! 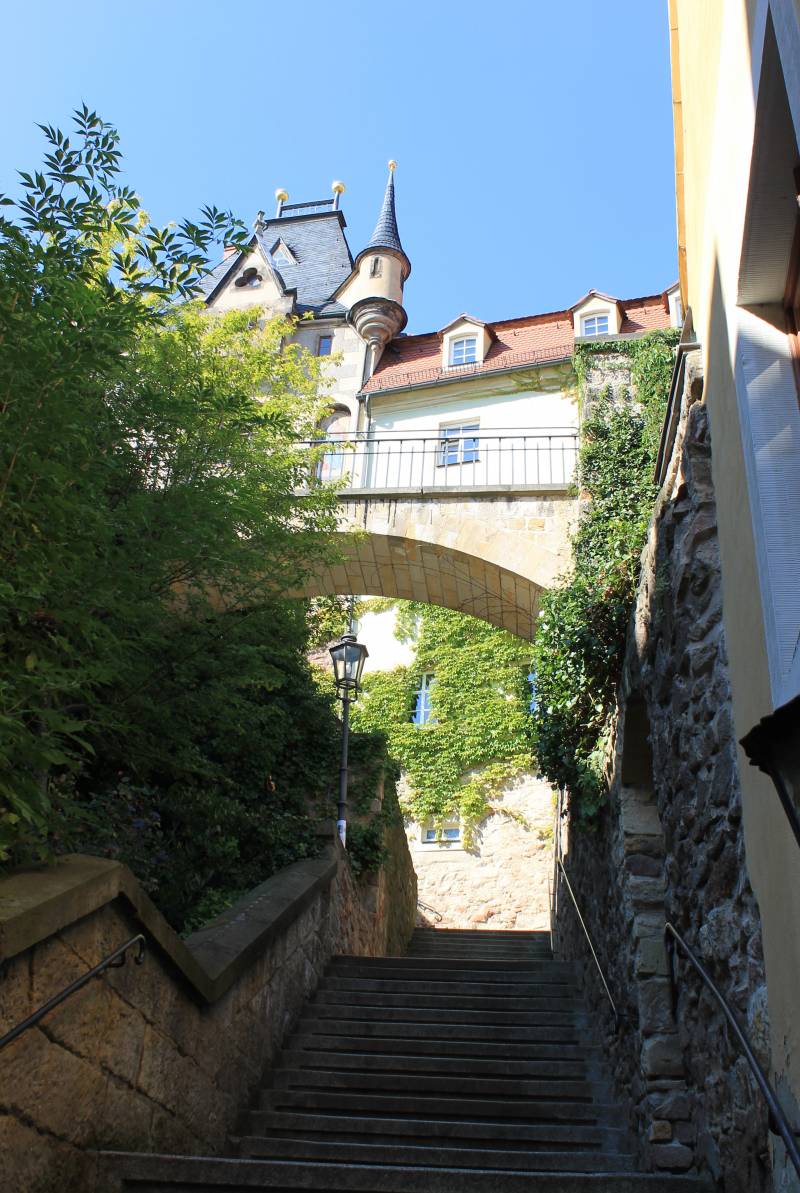 And these are the stairs leading to it and the castle.

Here, on the top of a hill, in the Middle Ages, the local nobility and clergymen lived, and he did not bear all the duties, and did not pay taxes. Houses here are more like fortresses and why this is understandable. Here, for example, the half-timbered house 1564 of the year, the house with the lions 1610 of the year, and the thousand-year-old yew are growing nearby. So the story here is literally before your eyes. 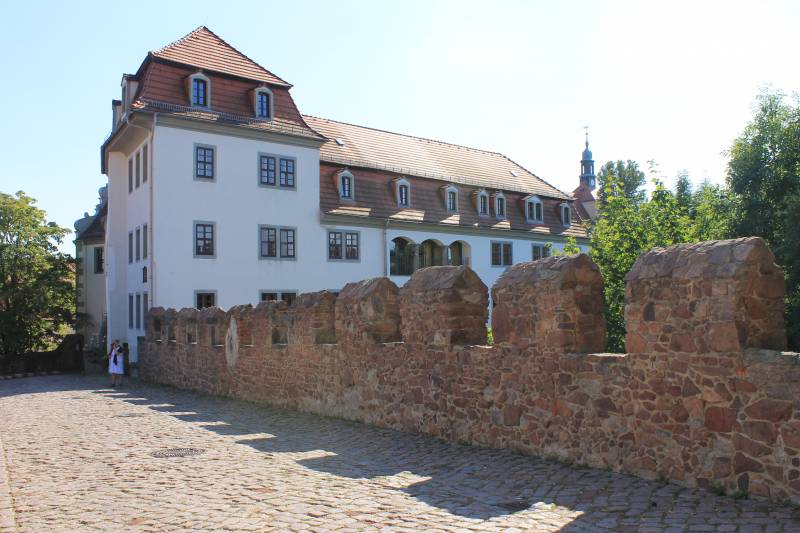 This is the Schlossbrücke bridge, which offers a beautiful view of the fields, vineyards and private houses of Meissen, which leads to the castle and the cathedral. 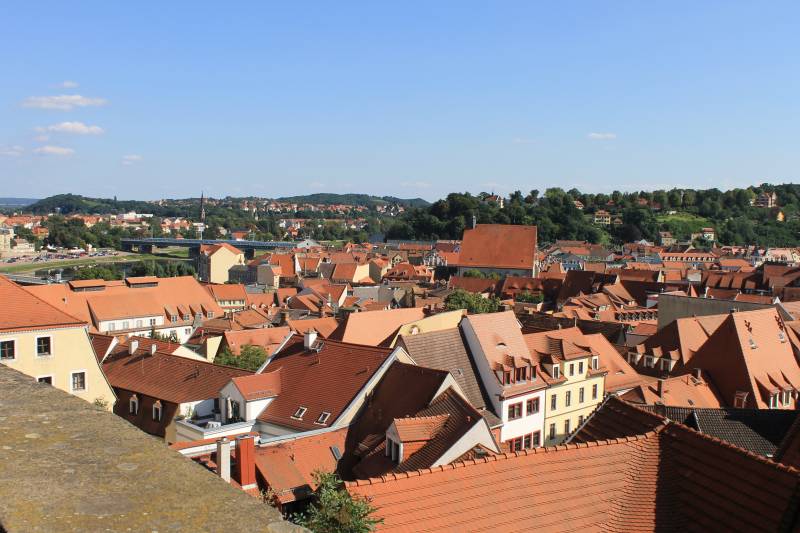 From the top there is a beautiful view of the red tiled roofs of the houses in the lower part of the city. By the way, the highest roof in this picture is just the roof of the museum with effigiy. Everything is close, literally within reach. 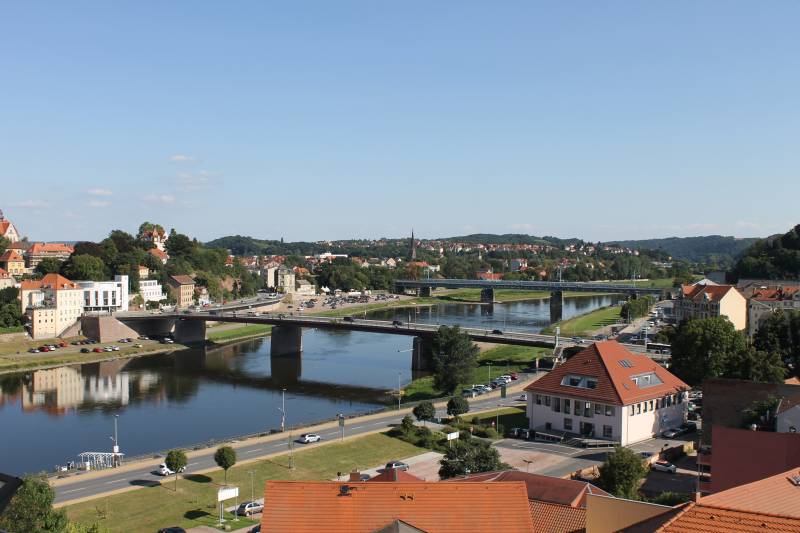 And this is a view of the bridges over the Elbe.

It remains only to pass under the beautiful Gateway House of the Tohaus Museum to get to the Cathedral Square or Domplats. In the middle of the square rises the Gothic Maysen Cathedral, which is commonly called the House (Dom in German - the cathedral). It was built in honor of St. John the Divine and Bishop Donat, and it was built over 500 years. For example, both towers (height 81 m) were completed only by the 1909 year, although construction itself was begun as early as the 1250 year. Inside the cathedral is decorated with sculptures of John and Donat, as well as the founders of the German Empire - Emperor Otto I and his wife Adelgeida. More information about the cathedral, by the way, you can read here. I am very sorry that I did not find this material before the trip. https://www.mishanita.ru/data/images/Germany_2011/Meissen/Meissen_Map.jpg 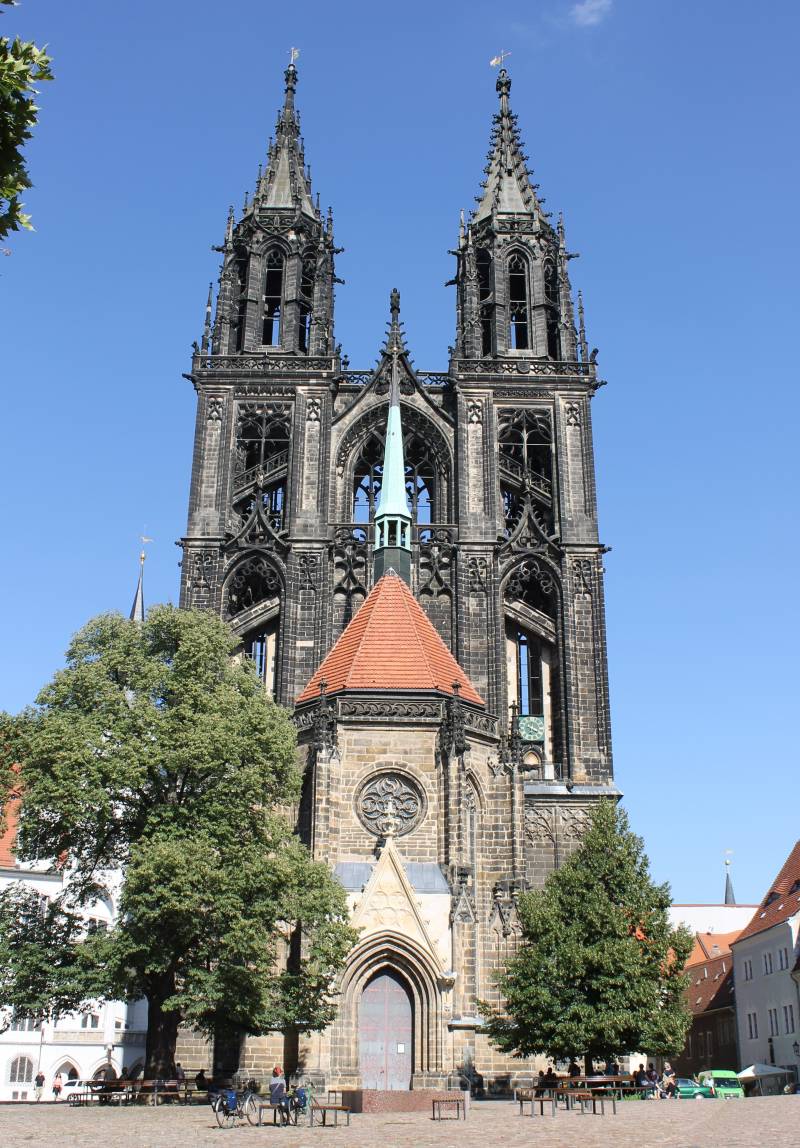 That's how it looks outside! 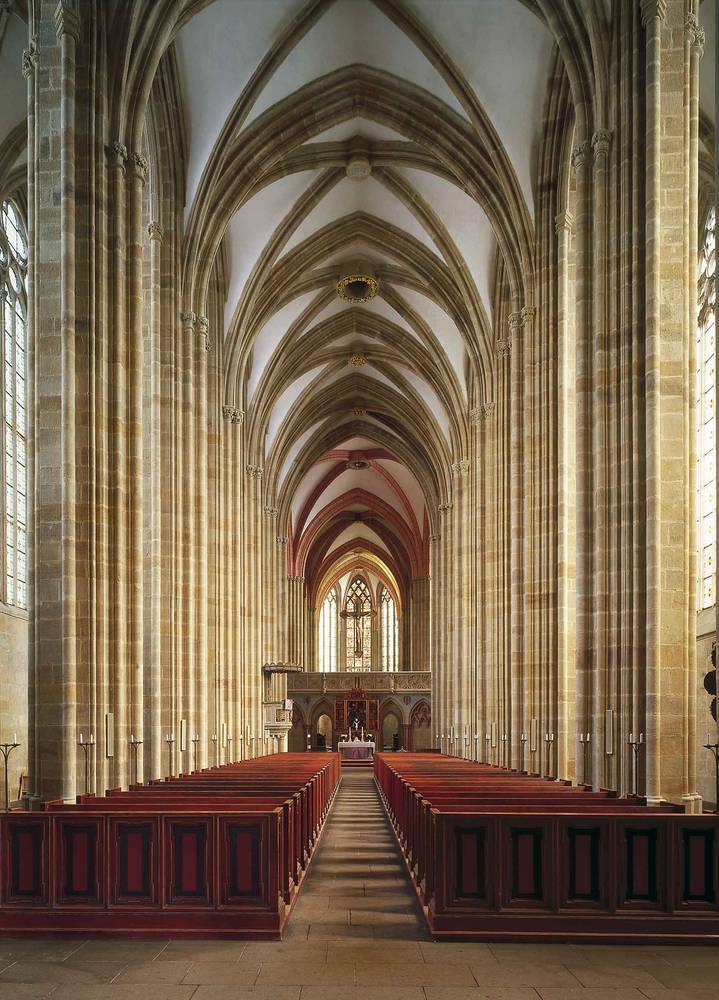 And so this cathedral looks from the inside. 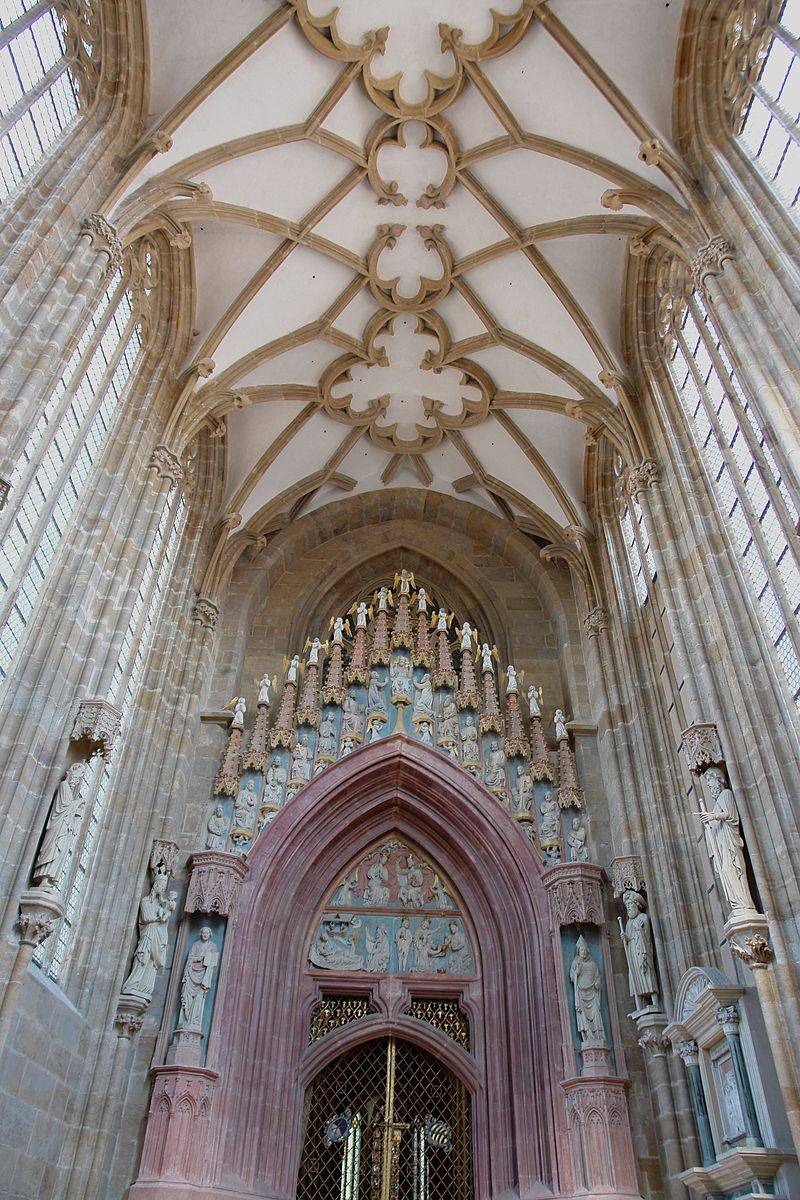 Unfortunately, the cathedral itself was closed, so we did not manage to get into it and had to be content to look around outside, although there is something to look at inside, including the same beautifully preserved images, and there is no charge for filming there! However, several effigy were displayed in a small garden behind the cathedral. But ... all belonging to the monks, and the knight only one (steam room), and it is poorly preserved. 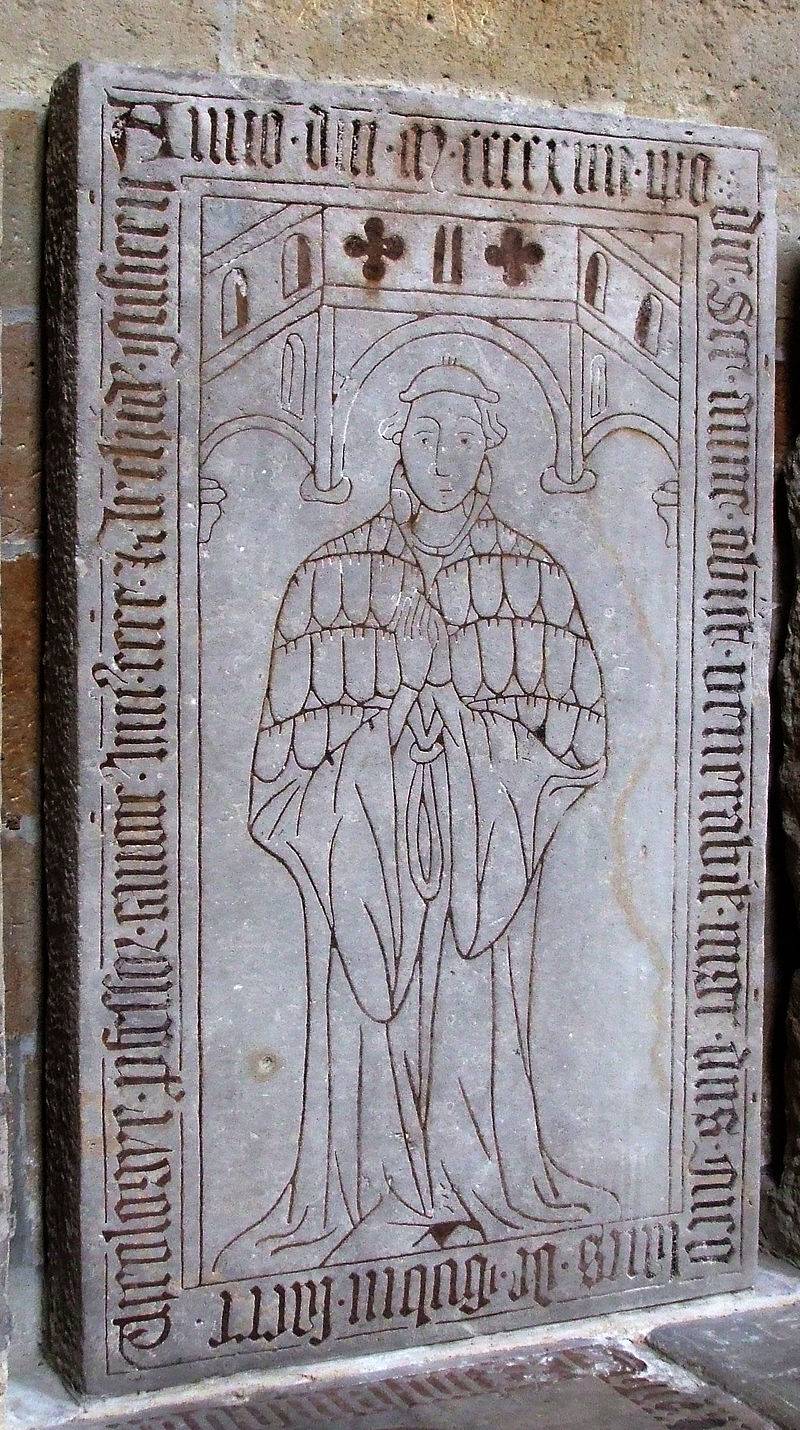 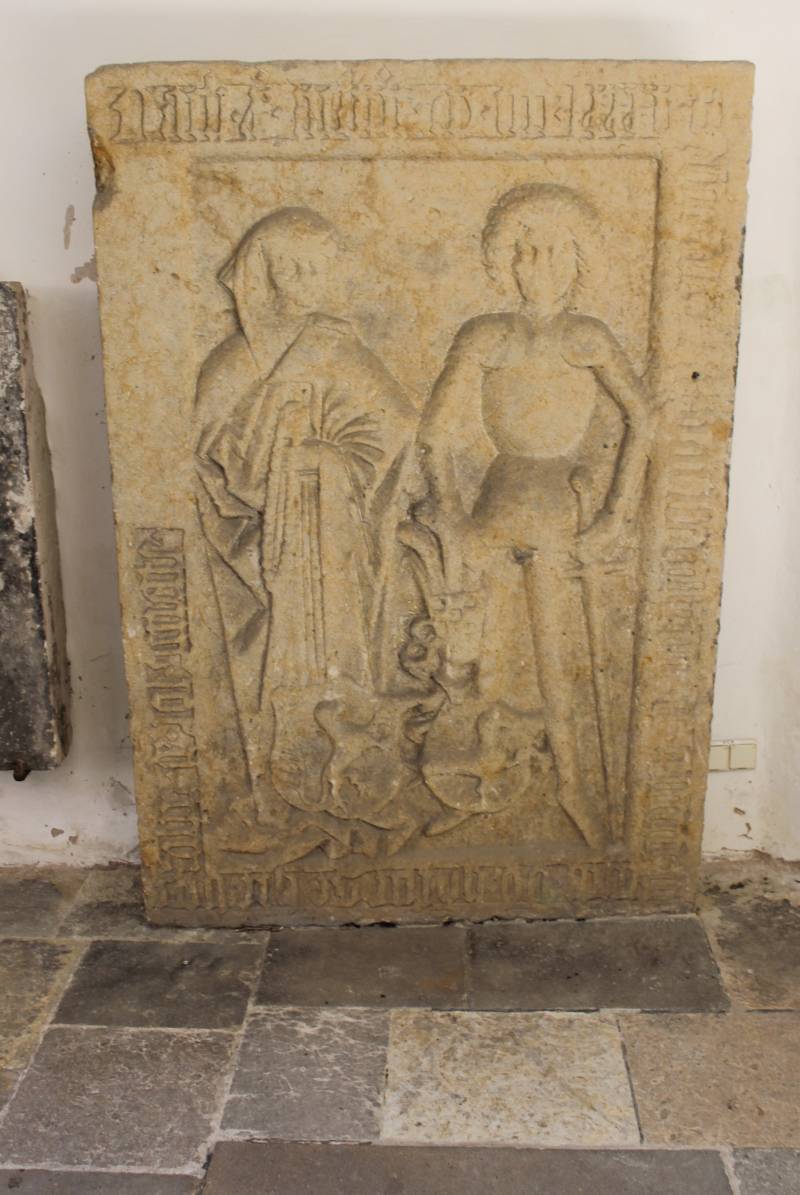 Next to the cathedral is the Albrechtsburg castle and the bishop's palace, which together create a unique monumental silhouette of Meissen, if you look at them from the side of the river. By the way, here is the zone of Saxon winemaking. Because of its particularly mild climate in the Elbe Valley, grapes provide excellent dry wine, which is revered by both tourists and locals. We were convinced of this literally right there, when they began to descend into the city from the castle along the stairs that lay along the hill slope. He is full of grapes! Vineyard right in the city center. And the announcement: "Whoever comes down this ladder, to the right is wine tasting from this vineyard for 50 euros!" We went down and found a shop. Tasting did not, but they took a bottle of local wine. We drank at home. Wine is good, although it grew in the center of the city. 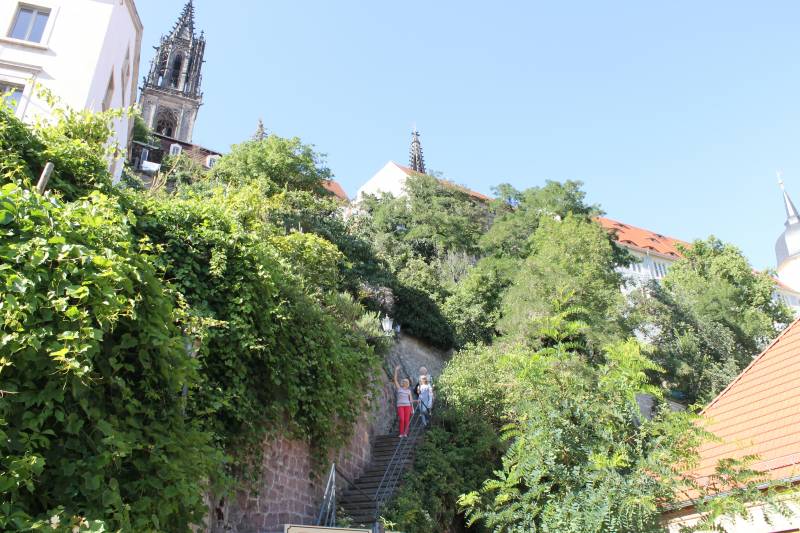 Here it is, this slope and grapes grow right under the castle. 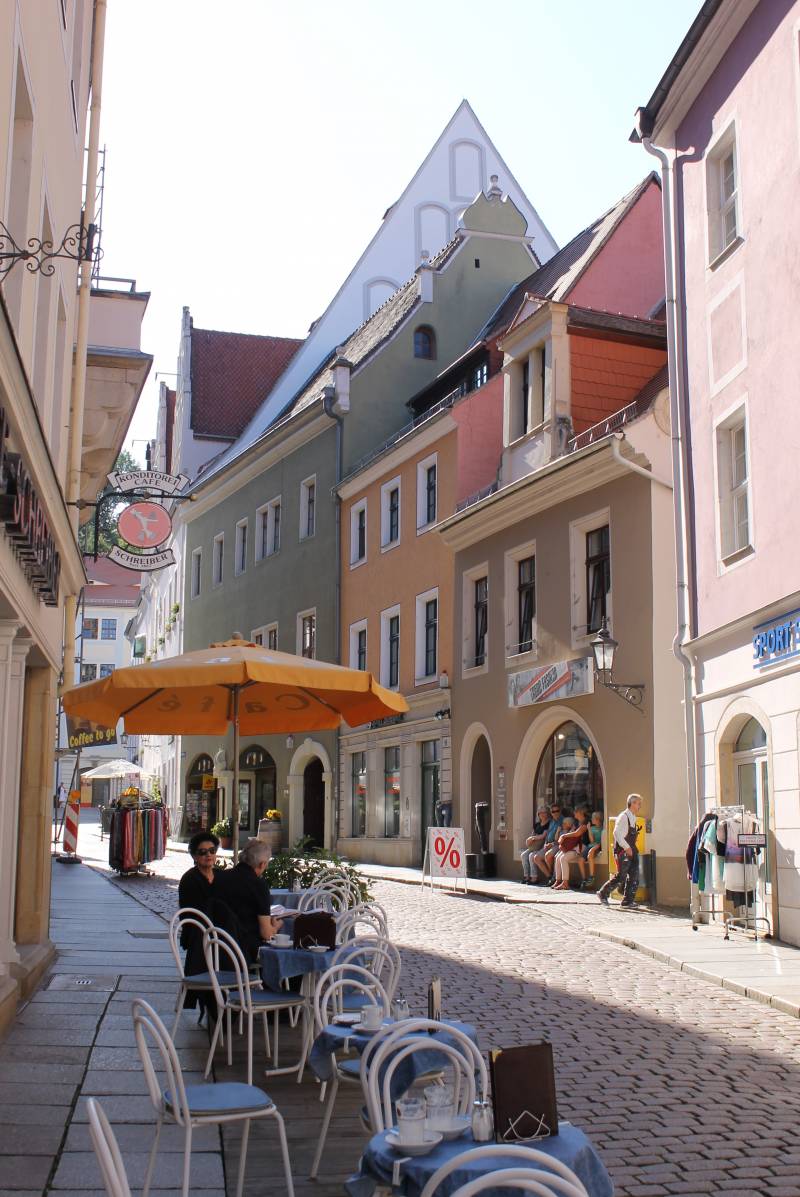 There are few tourists in the city, and there were no visible people at all. There are people in cafes, but no one is surprised, which was especially pleasant. You can just sit "like this" and drink coffee and cakes.

We also ended up in one such cafe: the housewife did not know English (!), And we were German, but explained ourselves on our fingers. Then we went to a meeting with the bus. On the way, we decided to drink beer again and have a snack. Found ... well, a typical German pub. And in it ... an old man who considered the revenue on the accounts !!! I asked to be served, and he barked: “Gretchen!” And Gretchen came out, as if from the movie: striped red and white knee socks, black flared skirt with laces, a blouse with piercing and sleeves with a flashlight, and in a lace-up corset. We explained to her that we are in a hurry. “EU! - She replied with a terrible accent. “Five minutes is coming?” - “EU!”. It was very interesting what can be cooked in such a hurry, but exactly five minutes later we were served fried cheese in batter with stewed sauerkraut and lingonberries. With beer it was very tasty. 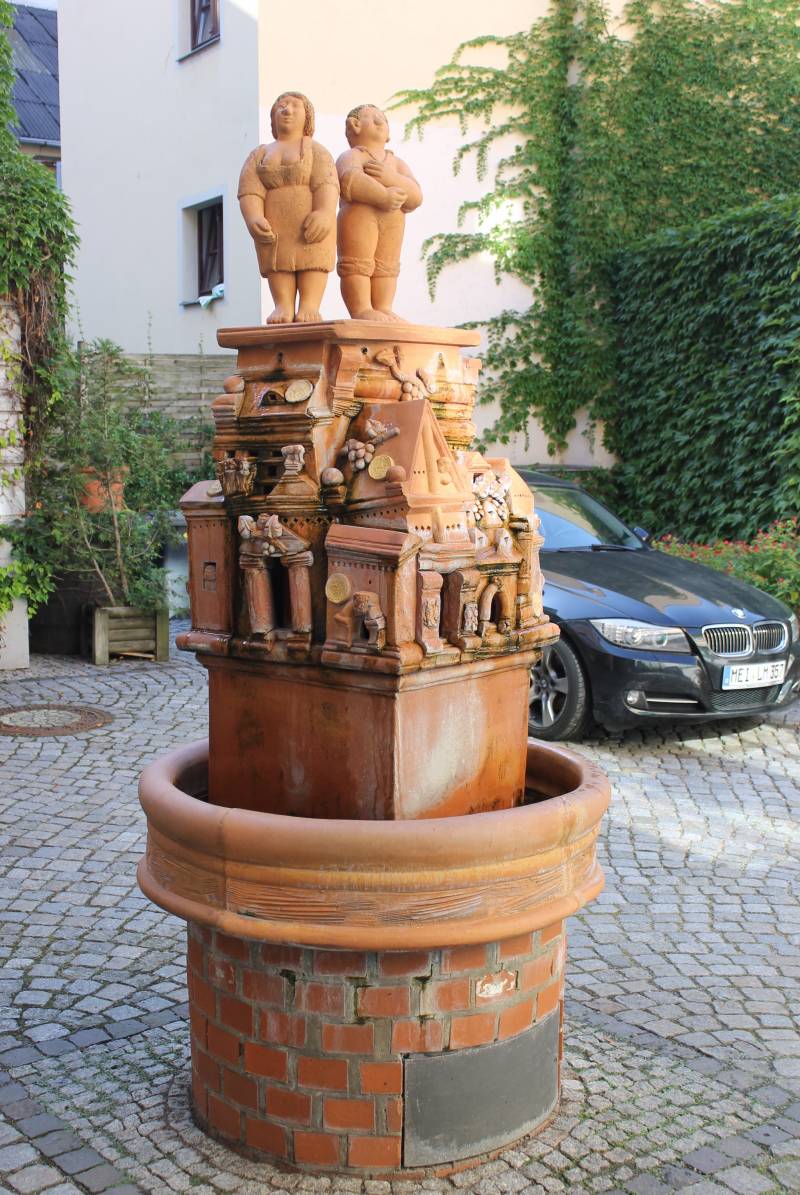 In one of the local courtyards I accidentally found such a dry fountain. Clean, nothing repulsed, no inscriptions painted. It was nice to see this ... In the courtyard. Not in the square under the cameras.

And then a bus appeared, and our stay in Meissen ended there!

Ctrl Enter
Noticed oshЫbku Highlight text and press. Ctrl + Enter
We are
Effigiya Dona Rodrigo Campusano or "the best alabaster armor"Effigy and breaststrops tell ... (Tombstone in the study of weapons of Western knights of the era of 1170-1659.)
Military Reviewin Yandex News
Military Reviewin Google News
34 comments
Information
Dear reader, to leave comments on the publication, you must to register.