December 26 2017
175
We continue to publish materials from S. Shpakovskaya’s dissertation on the formation and development of public relations services at the turn of the epochs - in 80-90. Twentieth century. The previous materials dealt with the training of propagandists and agitators, lecturers of the Knowledge Society and the work of Marxist-Leninist schools and universities. Today we will discuss what role the councils of workers' deputies played in the conduct of the party’s information policy. This, of course, is not “easy reading,” but it is clear evidence of how reforms were carried out at that time in the area of ​​establishing a constructive dialogue between the authorities and the people at the level of the regions of the Middle Volga region.
V.Shpakovsky


At that time, there were many councils of various levels whose task, just like the bodies of the party, was to carry out its policies. From among their deputies, commissions were created that were responsible for a specific direction in this work. Thus, 3 in October 1986 in the Standing Committee on Culture of the Penza Council of People’s Deputies addressed the issue of the work of cinemas “to improve public services in the light of the decisions of the 27th CPSU Congress”. The document adopted on this issue, the editorial offices of the newspapers Penzenskaya Pravda and the Young Leninist, proposed expanding the publication of reviews and in-depth analytical reviews of film productions in the spirit of the day, and suggested persistent anti-alcohol propaganda in cinemas, as well as opening a lecture hall for a sober lifestyle. Visual agitation: posters, advertising stands, invitations - all this is reflected in the session resolution. In order to improve the organization of communist education, it was proposed to hold conversations about morality: “About things”, “Friendship is a serious thing”, “Let's talk about humanity”. The subjects of the issues that were considered by the Penza City Executive Committee in the second half of the 80 were also quite diverse. Among them are the status and measures to improve the work on the prevention of offenses among students of vocational school №1 (08.04.85); “On the status of work at the Penza brewery (28.12.1987)”; “On measures to improve the fight against drunkenness and alcoholism and the eradication of home brewing at the brick factory No. 1 (15.09.1987) [1]. At the beginning of the year, the question was raised about the implementation of the decision of the Central Committee of the CPSU by the Leninsky ROVD of Penza from 20.11.86 on the “Further strengthening of socialist legality and law and order, strengthening the protection of the rights and legitimate interests of citizens (19.01.1988) [2]. 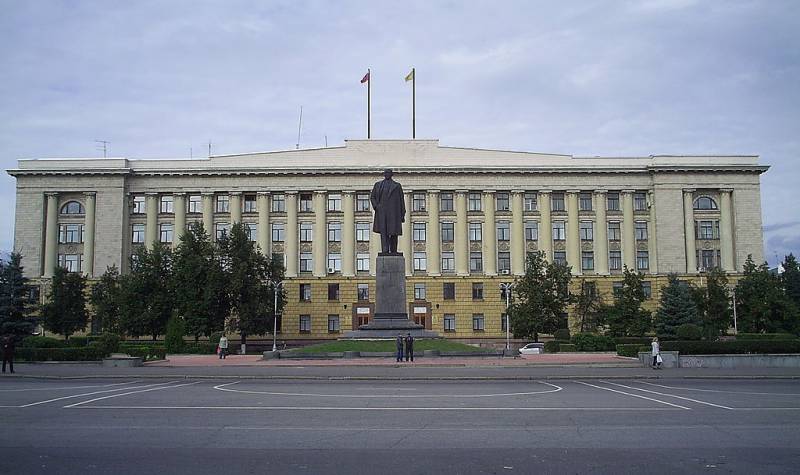 The building of the Government of the Penza region. 1958 to 1991 here was located the Penza Regional Committee of the CPSU.

The management process was carried out according to the following scheme: all instructions of the party were immediately duplicated by resolutions of the Soviets of People's Deputies. At the same time, a lot of attention was paid to the work with suggestions and comments expressed both by individuals and members of public organizations. Thus, the decisions of the III session of 21 of convocation of the Penza city council of people's deputies from 30.10.90 considered the information on the fulfillment of critical comments and suggestions made by the deputies of the previous session. The information indicated that 53 made suggestions and comments from 7, 26 was clarified, and 20 were in the area of ​​implementation. It was indicated to oblige the city executive committee and its departments to consider the submitted proposals more promptly, and most importantly - “make fuller use in this work of the power of publicity” [3].

At the same time, the certificates of the same city executive committee contain a lot of evidence that citizens do not show proper attention to citizens' appeals and complaints. Most often, the orders of the district councils were not fulfilled, although the citizens of Penza were the ones who most applied there.

Since the deputies did not possess any personal funds at that time and were completely dependent on budget allocations, most of their proposals did not find their fulfillment. Moreover, it was often stated in the documents that the deputy could not fulfill his duties in connection with being on maternity leave or childcare leave. However, the dominant problem was the lack of funds. Thus, deputy M. Gubenko, reporting on his work at the VEM plant (April 1987), told voters that he proposed to build an underground passage from the plant-technical technical unit to VEM. Then he said that he was receiving voters, in addition, they had built a playground on the street. Revolutionary, and the deputy didn’t manage to do anything else [5].

Interestingly, MS himself. Gorbachev, the initiator of perestroika in the USSR, became famous at this time with the following statements: “There can be no pluralism of two opinions” and “There is no dialogue with the opposition”, which clearly demonstrates the attitude of the then authorities to any forms and methods of dialogical communication.

Nevertheless, new forms of information work with the masses gradually entered into the practice of work of party organizations in the field. In particular, in the city of Saratov in the work plans of the ideological department of the CPSU Regional Committee, in addition to the standard requirement to hear the secretaries of the lower level to study the best practices of the party leadership of the press, the task was to create a press center at the CPSU OK. True, the goals of the work of this press center were determined by the old ones: informing journalists and “forming their political consciousness”. It was decided to regularly, at least 6-8, once a quarter, together with the press centers of the regional executive committees and other departments, to hold press conferences and briefings, together with the Saratov organization of the Union of Journalists to create a press club for contacts with journalists and other public organizations. [6].

As for the media of the Saratov region, they were given the following tasks at this time:
- to promote the strengthening of the ideological impact on the consolidation of society, the strengthening of the socialist ideal, the rationing of the communist worldview, enrichment and culture of the spiritual and moral sphere in society, the implementation of socio-economic programs;
- to provide objective coverage of the process of updating the party, increasing the role of local councils;
- to strive for the implementation of a close connection between Lenin's principles of partnership, partnership with party workers and journalists, to help the press in ensuring the effectiveness of publications.

It is characteristic that at the same time first attempts are being made to study public opinion. Thus, the ideological department of the OC CPSU of the Saratov region in March 1990 conducted a sociological survey of women, the purpose of which was to find out their attitude to the situation in the country, region and the CPSU as the organizing and leading force of Soviet society. In the report submitted to the Communist Party of the Soviet Union, the total number of respondents was not indicated, but it was noted that 53% of Saratov women from 29 to 49 years took part in it. The total volume of the document - 29 sheets containing very important and interesting information. In fact, it was a guide for conducting events on JI and further deepening the socio-economic, political and structural reforms of Soviet society. However, he did not find any practical application in the activities of the Saratov OK Communist Party of no recommendations for its publication and, at least for some practical use, were accepted [7].

This was already evident in the paralysis of the power structures, which had exhausted its potential for further development. Changes were increasingly caused by pressure from below with, again, the absence of effective measures on CO from above.

For example, in the city of Chapaevsk of the Samara region, JI measures aimed at establishing an ethical dialogue with the public during the construction of a plant for the elimination of chemical weapons, were not held. But the opponents of this plant staged a whole tent camp, in which there were representatives of informal organizations from Chapayevsk, Kazan and Saratov.

After the aforementioned events that took place in August 1989, foreign correspondents, representatives of the US Congress were allowed to enter the enterprise, who had to be personally convinced of its environmental safety [8]. But even this visit could not change the mindset of the residents of Chapaevsk and the deputies of the City Council. This plant has never been opened.

It is interesting to note that the Samara OK CPSU just as well as the OK CPSU of Saratov, was concerned with studying the public opinion of residents of the city and region. To this end, employees of the Kuybyshev State University conducted a sociological survey of the communists of the city and region on issues related to the restructuring and activities of the members of the CPSU in the new conditions. The result of the work was the proposal to create a regional socio-political center of the Center for Legal Control), which is supposed to ensure the interaction of the party with the masses in conditions of publicity and restructuring, as well as consultations, analytical and prognostic activities [9]. In addition to consultants, even a video studio was included in the OPC. Of course, this center was still far from modern structures such as committees for relations with materiality under the government of a particular area, but the fact is obvious that structures approaching them in terms of tasks at this time have already begun to emerge.

Thus, we can conclude that by the end of 1990 - the beginning of 1991, despite the rather traditional nature of the work of party and Soviet institutions in the Penza, Samara and Saratov regions, certain changes that we can now interpret as the first manifestations of new elements in areas of work on CO have already taken place. That is, the USSR was slowly but surely entering the information society. The influence of the media has increased, since the density of information flow has seriously increased. However, changes in the information policy were not supported by material support. People began to know more, but they didn’t become better off living.