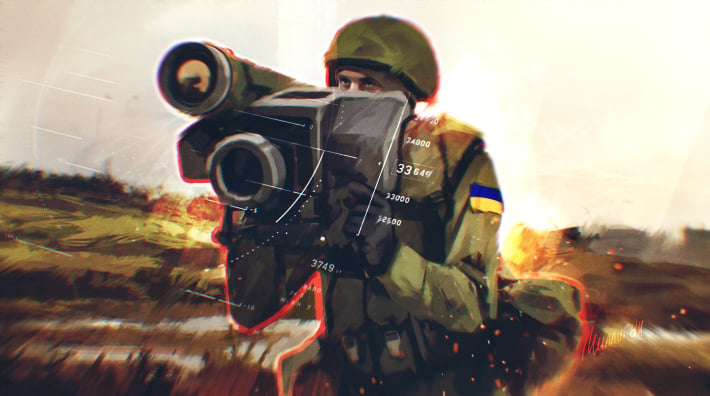 Russia promptly responded to this overseas “knight's move”: it withdraws its officers from the JSCC - the Joint Center for Control and Coordination in the Donbas at the OSCE mission. Officially, this is not mentioned, but everyone agrees that this is a serious decision of Russia, and it followed the serious decision of Canada / USA. The formal reason was the impossibility for Russian officers in the JCCC to carry out their mission, and the new rules for Russians to enter Ukraine from January 1, 2018, for which Kiev leads, in fact, the visa regime. Although the uselessness of the JCCC, which played the role of an OSCE fig leaf, was obvious for a long time, only now Russia took advantage of this occasion.

According to Franz Klintsevich, Chairman of the Committee on Defense of the Federation Council, the Bandera regime is preparing an offensive in the Donbas, and will supply weapons for it allegedly from Canada. Russia withdraws its contingent from the JCCC so that it does not fall victim to the provocation of the Armed Forces of Ukraine according to the South Ossetian scenario, and prepares retaliatory measures.

The demise of the JCCC also means the actual demise of the OSCE mission in the Donbas: it was its working body. Apparently, the OSCE will restrict its activities in Donetsk and Lugansk, as a mirror step, which means that the armed forces of Novorossia will be able to more actively and firmly suppress the firing positions of the Ukrainian Armed Forces. Actually, this is the practical meaning of Russia's withdrawal from the JCCC on the eve of the Bandera “toad jumps” announced by the bill on the “reintegration of Donbass”.

Secondly, the end of the JCCC is a consequence of Kiev’s sabotage of the Minsk Agreements, and the connivance of the western guarantors of Minsk. Minsk comedy of Kiev fed Moscow. In fact, the Minsk Agreement, and even the "Norman format", ceased to exist. When was the last time we heard about the “Norman format”? Volker-Surkov Summit took his place.

Thirdly, the end of the JCCC is the end of the Volker-Surkov summit. The promised meeting of the special representatives at the end of December seemed to be just hanging, and now buried. What peacekeepers in the Donbass can we talk about when there are no conditions for the work of the JCCC? (When this idea arose, I noted in my articles that there would be no peacekeepers in the Donbas: this is contrary to the political plans of both Kiev and Washington.)

Fourthly, in Kiev, not only began Michael, but also the second stage of the red-black, Bandera integral revolution, which its ideologues have always dreamed of. This is evidenced by the abundance of red-black banners of the “Right Sector” at the protest actions of Miho Saakashvili. The “Right Sector” uses Saakashvili as a cover, and will throw him at the earliest opportunity, if he does not make a “sacred victim” of his national revolution. If Saosashvili’s “imprisoned” Poroshenko’s squads, or if he somehow suicides, it will only play into the hands of Bandera neo-Nazis, they are already declaring that they will continue their “revolution” without Miho.

Note that Russia leaves the JSCC very quickly, without prior issuing of requirements. Therefore, the OSCE and the Western capitals are silent, and Kiev is in hysterics, screaming about the imminent offensive of the Armed Forces of New Russia. This is not clever: very soon this lie will be revealed. In relation to the West, this, of course, is Russia's demarche, and a serious warning, because it was done without words, but by concrete actions.

The withdrawal of Russian officers from the JCCC unleashes Russia's hands to react to possible provocations of the Armed Forces of Ukraine or the Nazi battalions on the front lines in the Donbas. In fact, Moscow warns: do not try to exacerbate the situation in the Donbas! Preparing at the same time conditions for the counter-attack of the Armed Forces of the New Russia in the event of a Bandera offensive. Note that the VKS, by the way, is partially withdrawn from Syria.

Poroshenko began to burn in Kiev. Mikhomaydan develops into a new “revolution of hydration”, and the Right Sector is firmly in it. Most experts agree that Poroshenko can stop the neo-Nazi Maidan in Kiev only by the onset of the Armed Forces of Ukraine in the Donbas. Under the slogan: "Bandera in danger! All to the Donbass Front! ”Will the Head of the General Staff of the Armed Forces of Ukraine, Victor Muzhenko, go for it? Are there enough reserves for this, or will everything be reduced to new “toad jumps”? Will the VSU really help arms from overseas? Soon we will find out ...

The only obstacle to the new adventure of Kiev looks Donald Trump. Including why Putin at a press conference was concerned Donald. However, the "well-wishers" have found a way to deliver weapons to Ukraine through Canada bypassing Trump, and the war can begin to bypass Trump. Bandera Krajina same "independent country"! This is how rapidly the events began after Canada’s decision to allow the delivery of weapons to Bandera.

Ctrl Enter
Noticed oshЫbku Highlight text and press. Ctrl + Enter
We are
Reports from the militia of New Russia for 27-28 September 2014 of the yearResults of the week. "Well, do not change me because of every idiot!"
Military Reviewin Yandex News
Military Reviewin Google News
29 comments
Information
Dear reader, to leave comments on the publication, you must to register.