The first serial Mi-28HM will be produced before the end of the 2018 of the year.

December 18 2017
46
The Russian Ministry of Defense and the Russian Helicopters holding signed a state contract for the production of an installation batch of upgraded Mi-28HM helicopters, the first two cars will be made before the end of 2018, the Krasnaya Zvezda newspaper reported on Monday.


As Deputy Defense Minister Yury Borisov noted, the appearance of the Mi-28HM differs significantly from the basic version of the Mi-28Н helicopter. 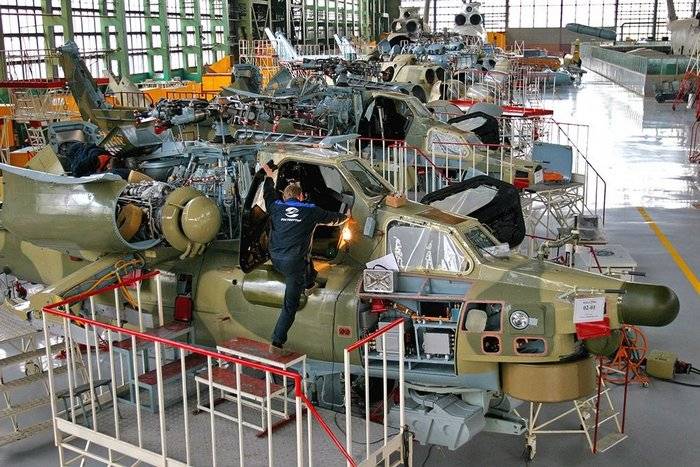 First of all, the functionality of the combat vehicle has been improved by changing the ergonomics of the crew cabin and installing a backup helicopter control system in the cockpit of the pilot-operator. The car acquired a modified fuselage, upgraded engines, an onboard complex of electronic equipment and a sight-sight system, a new auxiliary power unit, communications equipment with unmanned aerial vehicles.
- said Borisov, whose words are quoted by the publication.

The laser defense complex also serves to increase the combat survivability of the helicopter. A control system weapons allows you to use at long distances guided missiles with laser and radar guidance systems.

Planned installation on the Mi-28HM nashlemnoy target designation and guidance. Together with the all-around radar of a circular view, it will significantly increase the effectiveness of the Night Hunter in all weather conditions.
- noted Yuri Borisov.

We decided that further contracting of the "twenty-eighth" vehicles will be conducted in favor of the Mi-28HM
- stressed the deputy head of the Ministry of Defense.

Ctrl Enter
Noticed oshЫbku Highlight text and press. Ctrl + Enter
We are
News of the Mi-28HM projectRadioelectronic Technologies Concern is developing equipment for Mi-28HM
46 comments
Information
Dear reader, to leave comments on the publication, you must to register.