December 16 2017
31
In the province of Damascus, an important meeting of local elders, government officials and the public was held. The main topics of discussion were local security issues, as well as the call of local youth in the Syrian army. This meeting is remarkable in that the recruitment of young people into the Syrian army against the background of hostilities in the country is being discussed for the first time in several years.


The governor of the metropolitan province noted that today already about 4 thousands of young Syrians (and this is only in the province of Damascus) have applied for service in the ranks of the Syrian government forces.

From the statement of the governor, which the Syrian journalist Riyad Farid Hijab cites:
Young people are ready to contribute to the stability and security in the country.

However, representatives of the administration have so far been forced to refuse many young Syrians to be admitted to the army, so that after a while they can give a green light to the call not just as an eager revenge for the death of their relatives, but as a soldier who is given the opportunity to become the owner of a full-fledged MES In other words, we are talking about the need to restore in Syria a full-fledged learning process in the army as well. At the same time, it is important for the Syrian authorities that the Syrian youth, in case of refusal today, do not take up weapon already tomorrow

From the statement of the governor:
Let's reason logically. If a young man who, due to age and life circumstances, wants revenge for the death of his parents at the hands of terrorists, refuses the government army, what will he do? Most likely, he will find the opportunity to buy weapons and join the ranks of the militia. For such young people still need to provide places in the armed forces. They will be trained not only to shoot from a machine gun, but also to control a tank. He will receive a related specialty. 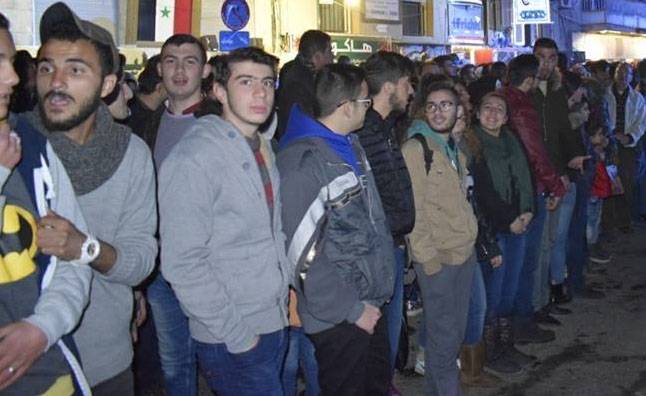 Riyad Farid Hijab interviewed a young Syrian who applied for membership in the SAR armed forces. According to the young man, whose name is Ahmad, he is determined to help Syria finally get rid of the terrorists and their accomplices.

From the statement of Ahmad:
We must force the occupiers to leave the lands of the Arab Republic, and they, like any bandits, understand only power!

At the same time, the Syrian said that he was ready to fight and against the American servicemen who are illegally in his country.

Against this background, there are reports from the Middle East that the United States is having problems with contacts with Jordan, which has in fact recently provided the US army with logistics operations in several provinces of Syria. The problems are related to the fact that the Jordanian authorities have reacted extremely negatively to the decision of the US President Donald Trump to recognize Jerusalem as the capital of Israel. Without Amman’s logistical support, the issue of providing American bases in Syria hangs in the air, especially considering that the United States also has problems with another state neighboring Turkey - Turkey.