Operation "Capless" - a half-century tradition of Novorossiysk. How is it now?

December 14 2017
8
"Peakless Cap" as a tradition goes farther and farther from its origins. And the further, the more superficial, which the founders did not even plan. Moreover, the founders of "beskorzyrki" partly defended their initiative precisely as an alternative to officialdom with all its official bureaucratic activities, and at the same time looking back at the high authorities.


For example, according to the idea of ​​Konstantin Podymy, initially a boy, but not a warrior, was supposed to bear a visor. The warriors, on the other hand, should have been sent a guard of honor next to the boy, on whose hands lay his cap. According to the idea of ​​the shkhunatikov and their captain, this would in the best possible way underline the continuity of generations and gratitude to the heroes who have defended the freedom and independence of our Motherland. The obstacles began instantly. The authorities were indignant at once, but when the boy suddenly stumbled. Reinsured in one word. 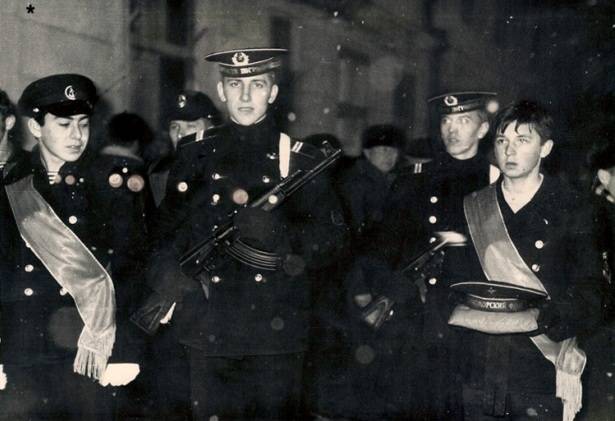 Right in the hands of a young schoolboy the famous beskorik 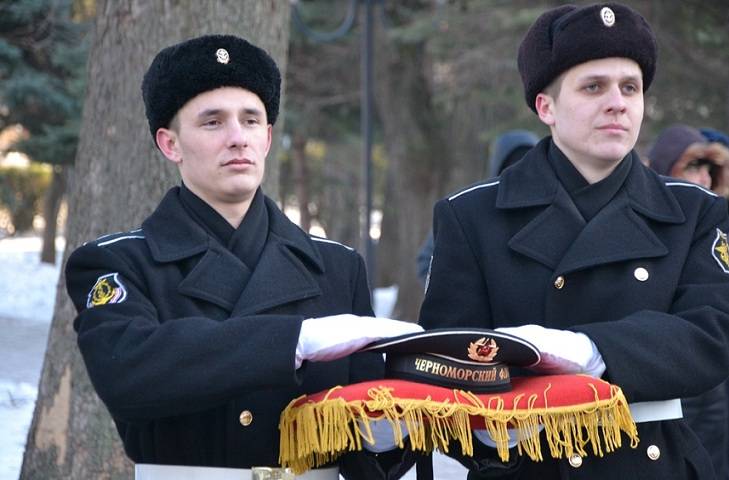 Despite this, right up to 1990, the young man bore his cap without fail, and the guard of honor minted a step nearby. The new democratic government turned out to be so “wiser” than the Communists that it instantly forgot both the continuity and the younger generation. From 90 year, only servicemen, besides servicemen riding an armored personnel carrier, carried a capless helmet. The columns were now headed by local officials and officers of the Novorossiysk garrison, and more recently the Cossacks. 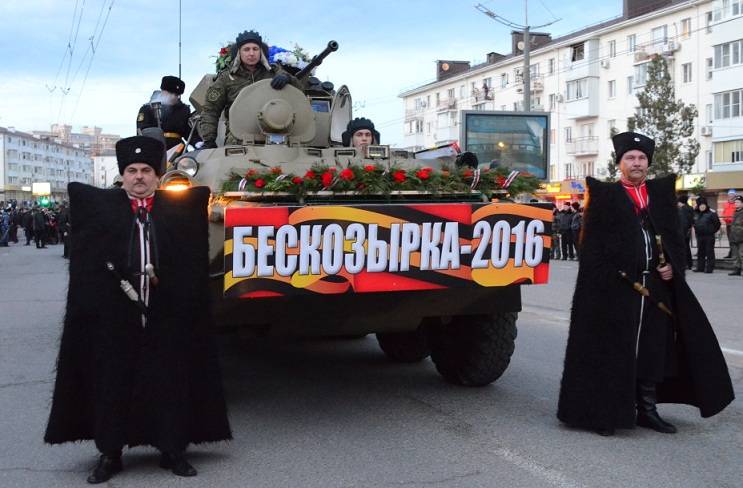 In my humble opinion, this is at least ridiculous.

Simply put, many comrades decided to warm their reputation near the Flameless Peak flame. It should be remembered that the difficulty lies precisely in the fact that these same “comrades” hide among hundreds of people for whom this march is not only a tradition, but also an honor, a memory. 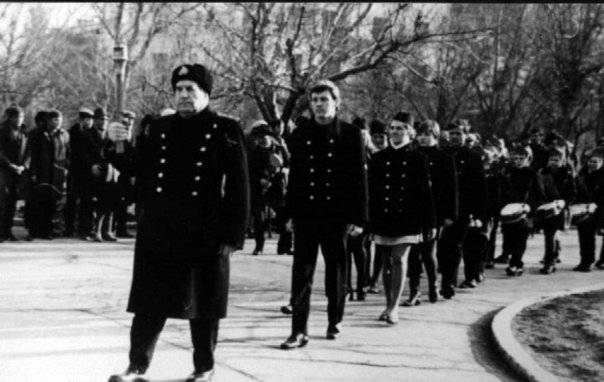 The right to carry the fire was entrusted to George Kholostyakov, an honored guest of the city, the hero of the Battle of Novorossiysk, who deserved the order with blood.

Unfortunately, it was not possible to completely withdraw from the official, unusual for "Peakless Cap" initially. Applied the old good policy of "voluntary-compulsory" invitations to the participation of students, schoolchildren, municipal workers and so on. All of this, to the benefit of certain people, turns into “work on patriotic education.” And the trouble is not that someone will be ticked off on paper, but the fact that without constant educational work among young people, the guys participating in the "Capless" do not really understand the meaning of such a mass event at all. stories. But this already makes the "operation" for them alien, even a fake and bureaucratic. Not once or twice did I myself have heard outraged voices, they say, and what are we doing here. And often it turned out not indifference or laziness, but simply ignorance of history. This is especially true of the incoming student youth who entered the Novorossiysk universities.

Also, the time of the "Peakless", which now ends earlier than 22: February 00 3, has shifted completely. The former midnight procession is remembered by only a few. But it is at least explainable. But the fact that the “operation” was overgrown with various accompanying poorly organized events, which, however, look beautiful in the reports, is very disturbing. For example, the so-called “reconstruction” of events, which was not even originally envisaged by the plan, has long been the subject of headaches for local historical and patriotic communities. 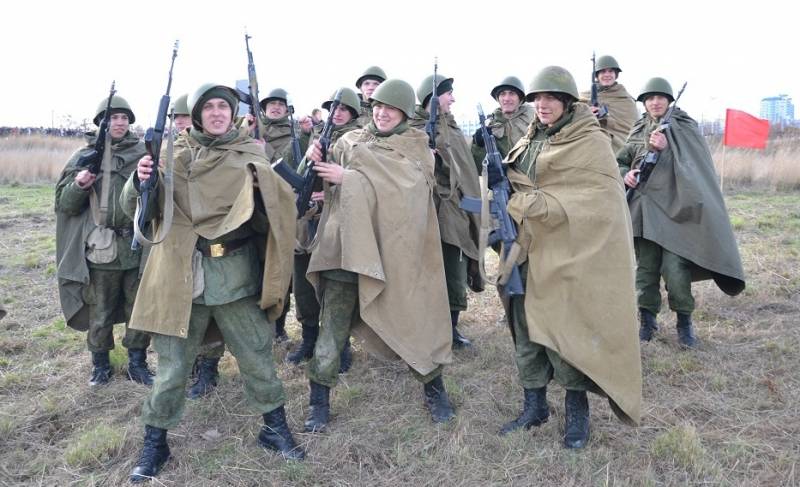 According to the Novorossiysk search engines, who traditionally take an active part in the "Capless", sometimes you feel real shame for the level of "reconstruction" of the 1943 events of the year (landing of Caesar Kunikov's troops). In fact, it is bitter to see how, within the framework of the “All-Russian Action”, a crowd of men running from the coast, armed with AK-74M, and also dressed in modern camouflage, is running for the reconstruction. In this motley "landing" even an unknowing viewer can easily single out the real reenactors, equipped as required by the original event. This, in turn, makes it even sharper to understand the weak, even disorderly organization of such an important phenomenon for Novorossiysk as “Operation Peakless Cap”. In part, this situation is only the result of the desire of the mass action on the part of the authorities. And no matter what kind of landing "landed" on the shore - the main thing is a lot, in green and with weapons, even with a gun Galil.

The “operation”, of course, was attended by the guys from Krasnodar, Sevastopol, even once from Murmansk. At the same time, at a very high level, there are no complaints about them. But again, the initiative came from below through a bureaucratic apparatus. At least some continuity.
However, I am obliged to note that "Peakless" is still developing, contrary to or due to - another question. So, that is not so well known outside of Novorossiysk, the torch lit from the Eternal Flame is sent not only to the “Malaya Zemlya” memorial, but also to South Ozereyka, in which upon the arrival of the torch a requiem for the dead in the tragic main landing begins. And this is completely true. 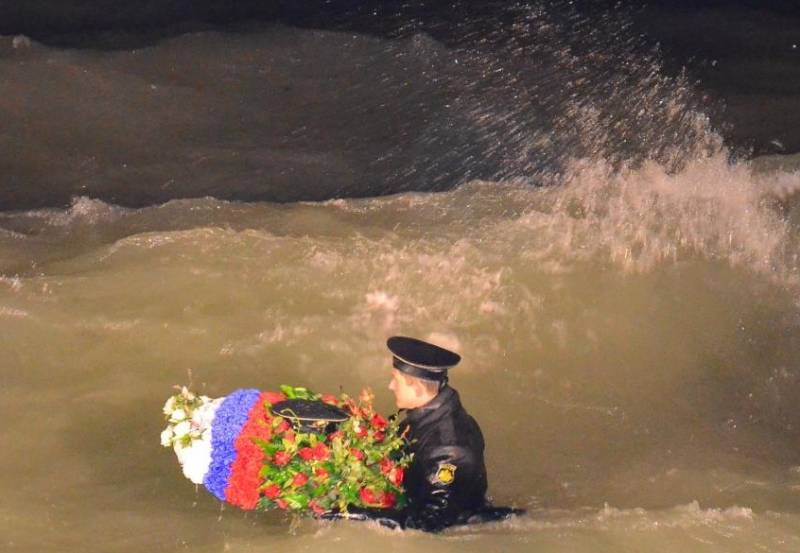 Also, a very sensible idea was the start of the “Candle in the Window” campaign for those who cannot reach the sea on February evening. But the main thing is that every year the peakless cap sinks into the stormy waves of the Black Sea in memory of all the fallen. Sometimes, it seems that it is necessary to interrupt this tradition, as Novorossiysk itself will end.

Ctrl Enter
Noticed oshЫbku Highlight text and press. Ctrl + Enter
We are
Results of the week. “If I am leaning against a warm wall in a quiet place, then I’m still nothing at all!”Reports from the militia of New Russia for 27-28 September 2014 of the year
Military Reviewin Yandex News
Military Reviewin Google News
8 comments
Information
Dear reader, to leave comments on the publication, you must to register.