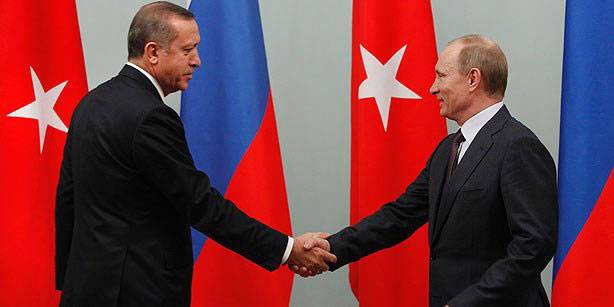 It seems that the year approaching the end of 2017 will be a landmark in terms of changing the geopolitical situation in Eurasia, which, of course, will change the whole picture at the global level. The latest events in the international political arena demonstrate the previously unthinkable rapid rapprochement between Russia and Turkey. Two seemingly eternal military, religious and political adversaries who, after the incident with the downed Russian bomber, were on the verge of a complete breakup of relations, not only concluded a temporary “truce”, but demonstrated a truly amazing boost in almost all areas of cooperation.

Of course, such a maneuver did not go unnoticed by the army of political experts and analysts. However, in explaining the new Russian-Turkish political phenomenon, the overwhelming majority of them demonstrate surprising short-sightedness, based on the interpretation of the latest landmark events solely from the personal characteristics of Erdogan. Saying, faced with the rejection in the West of their authoritarian methods and adherence to Islamic ideology, Erdogan made a demonstrative, but temporary, turn towards Moscow. And with any positive foreign policy sign of attention from the US or the EU, it will instantly turn its back on Russia. However, there are a number of points that make us think that changing the priorities of official Ankara is a long-term one.

First, with all his dictatorial manners, Recep Tayyip Erdogan was and remains a pragmatist. An example of this is his position regarding Turkey’s accession to the European Union. If someone does not know, then the idea of ​​the entry of the Turkish Republic into the structures of a united Europe for Ankara for many decades was a fundamental, if you will, ideological one. Indeed, since the time of Kemal Ataturk, most of the Turkish intellectual, military and political elite have thought of themselves as Europeans. Turkey is an associate member of the EU since the 1964 of the year, and the formal application for membership was submitted back in the 1987 year. Think about it, for thirty years the Turks have been waiting for, and when their European aspirations will be appreciated. And what is the result? Two key continental players, France and Germany, were and remain strongly opposed to this, regardless of the change in their own internal political course. Germany, having conducted an unsuccessful multicultural experiment, fears the uncontrolled growth of the Turkish diaspora, and France traditionally finds a reason to talk about human rights violations, disguising a deep aversion to a country with a large population and a promising economy.

What is the result of Turkish "European integration" today? And the bottom line is: Erdogan, being a realist, did not bury his head in the sand and acknowledged publicly the fact that the EU is, in fact, a closed Christian club, which Turkey will never accept under any circumstances. Consequently, it is not worth trying. Think about it: for the first time in three decades, the political leader of Turkey declared a rejection of the foreign policy line, which was before that a constant of the entire national foreign policy! However, nature does not tolerate emptiness, and the gaping dip in the western direction should be compensated by something. And we see that the ship of Turkish foreign policy confidently headed for the north.

Secondly, Ankara’s crisis with the North Atlantic Alliance has been observed for several years now, "culminating" in a recent scandal at the training exercises in Norway, when images of Turkish political leaders, including Ataturk, were used as targets for shooting. But this malicious insult from military "allies" is just petty hooliganism compared to what happened in the 2015 year. The fact is that, despite the size of its armed forces (second place in the entire NATO bloc), there is a significant gap in Turkey’s defense capability. We are talking about the absence of modern echeloned air defense (AD). All attempts by Ankara to purchase Patriot complexes from its American partners failed due to the fundamental unwillingness of the United States. Unwillingness to arm with modern defensive weapons The "friends" on whose territory the Americans have a huge, strategically important Incirlik air base have long been masked by the ranting that the American and German Patriots deployed in the country already guarantee the safe skies of Turkey. And only by extending to the Americans permission to use the airbase in 2015, the Turks were surprised to learn that the "guarantors" unilaterally decided to remove the complexes from duty! To say that trust in NATO partners has been undermined is to say nothing. Considering that the legislative base of the alliance does not at all envisage the mandatory entry of the Allies into the war in case of an attack on one of the participants, leaving the decision to the discretion of the national governments, the Turks had to ask themselves: who then Russia should be for them? Strategic adversary or strategic partner? The signing of a contract for the supply of the latest Russian C-400 air defense systems against the background of contracts concluded earlier with Moscow in the field of energy transportation and nuclear energy makes it clear what answer the Turkish side has come to. The fact is that the Russian C-400, which is fundamentally not integrated into a single NATO air defense system, means in practice the beginning of long-term cooperation (training of operators and supply of components), as well as the design of a national defense-level defense system with extensive involvement of the Russian military-industrial complex capable of offering a large range of ground-based complexes.

Thus, we are witnessing how Turkey is making a cardinal geopolitical turn towards Russia. Already signed contracts only make sense if their implementation is prolonged for at least 50 years. And there is an absolute certainty that Russia will not alienate the Turkish partners in the way that America and Europe did.