December 12 2017
19
The verb "allow" in the title could be quoted. And you can not take it: after all, Washington considers its will almost as law for those it dictates. Major US media have reported that the White House is ready to allow Mr. Assad to rule Syria right up to the 2021 year. Where did this political generosity come from? 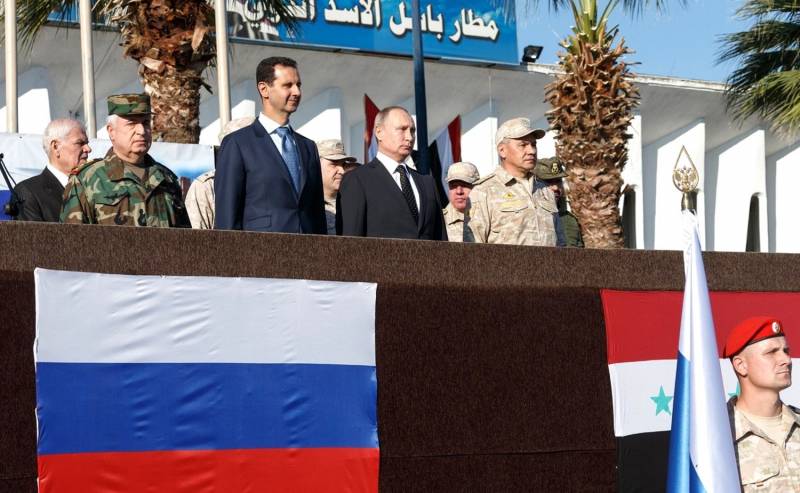 Let's look at the original sources. Where did the sensational American news?

A few hours ago in the edition "New Yorker" Robin Wright has been published. The journalist reported something sensational: the administration of D. Trump is ready to agree with the continuation of the rule of President Bashar al-Assad in Syria. And not for any short-term period, but until the next scheduled presidential election in the country, which is due in 2021 year.

This correspondent said US officials. The information was confirmed by European officials. (Names are not named.)

This decision of the White House nullifies a number of statements by the United States that Assad should resign in the peace process.

And this decision was made, R. Wright notes, despite the fact that “more than half a million people died in the Syrian civil war, and dozens of people died from chemical weapons».

The observer recalls that recently, in October, US Secretary of State Rex Tillerson, after his tour of the Middle Eastern states, told reporters of the White House pool that the Asad family rule "is coming to an end." And "the only problem is how this [Asad’s departure] is going to happen."

The current decision of the US administration seems to reflect the "limited opportunities" of the White House and the "military reality on the ground", that is, "the success of the Syrian allies: Russia, Iran and Hezbollah, who supported the Assad regime, which was under siege."

In an "unexpected visit to Syria," held on Monday, Russian President Vladimir Putin proclaimed victory over the IG jihadists (banned in Russia), the journalist writes. According to Putin, two years later, the Russian armed forces and the Syrian army defeated the international terrorist groups.

The decision of Russia to support the Assad army from the air, taken in 2015, is considered a turning point for the Syrian regime, reminds Wright.

Washington also participated in this war. Since 2014, the United States has spent more than fourteen billion dollars (an average of more than thirteen million a day) on its air campaign against a pseudo-caliphate. Washington also sent two thousand soldiers to consult the Syrian democratic forces and insurgent groups.

Despite this, the situation on the ground over the past few months has led the White House administration to agree with Assad, whose family has ruled Syria for almost half a century, in power for almost 4.

Currently, the publication points out, Asad controls most of the territories, including Damascus, Hama, Homs, Latakia and Aleppo, the latter of which were once strongholds of the opposition, that is, the part that American analysts called "useful Syria". The Assad regime and its foreign allies (Russia, Iran and the Lebanese Hezbollah) combined what was considered to be separate pieces of territory just a year ago. The power of Assad is now restored over most of the Syrian population.

As for the opposition groups in Syria, previously supported by the United States, they were in the struggle "ineffective." They not only argued among themselves, but also divided into factions. No strong unified leadership of the opposition has emerged in almost seven years of war, which began with the unrest of the “Arab Spring” in 2011. And the demand of these groups for the "resignation" of Assad, put forward "as a prerequisite for peace or a political transition process," is becoming "increasingly unrealistic," the journalist sums up.

Washington got into an uncomfortable political situation: diplomatically, it turned out to be ousted from the process by a “powerful troika”: Russia, Iran and Turkey. It is these three states that dominate the peace process today. Several rounds of negotiations organized by the UN in Geneva did not lead to success. The UN efforts "were replaced" by peace negotiations held with the active participation of Russia in Astana (Kazakhstan). After a visit to Syria, Putin immediately flew to Turkey to discuss the next steps in this process with President Recep Tayyip Erdogan.

When Trump began his presidency, the United States hoped that Syria would become the issue on which a compromise with Russia would be reached. However, in April 2017, one of Trump’s first military decisions was a massive missile attack on the Syrian base. Trump thus delivered a “personal blow” to Assad.

Now, given the "political and military realities", US officials have come to the conclusion: any transfer of power in Syria depends on credible elections held under the supervision of the United Nations. Today, the situation in Syria is extremely heavy. A number of cities, enterprises, schools, medical institutions were destroyed, infrastructure (electric networks, roads) was swept away. Millions of people left the country, tens of millions turned into forced migrants.

According to diplomats, the prospect of holding free and fair elections in Syria, in which millions of refugees scattered across dozens of countries must participate, will be an “unprecedented challenge.” And her decision to take considerable time. It will also take time to form a “new, more reliable Syrian opposition,” a commentator notes.

It turns out that Assad may remain in power even after Trump leaves the White House (the next US election will be held in the fall of 2020 of the year). US officials are already worried that Assad will be able to win elections in Syria and in 2021, and then he "will remain in power for many years."

The turning point in Syria served as a reason for foreign analysts to announce the new Middle East order. Federico Perachchini, whose material was published on the English-language website "Fund of Strategic Culture", no longer doubts: the fate of the region will be decided first of all by Russia, Turkey and Iran.

All meetings of recent days and weeks to confirm this. Moscow’s dedication to a coherent Syrian state and a political solution leading to the peace process is obvious. The presidents of Russia and Syria were able to agree on the need to involve in the reform process "the maximum possible number of opposition groups," the analyst writes. And in this regard, the meeting of Rouhani, Erdogan and Putin was aimed precisely at creating the conditions for a comprehensive solution that would suit all those who agreed to lay down their arms and begin negotiations with the legitimate government in Damascus.

The steps of the Turkish President Erdogan also confirmed: his strategy in the region is really “based on a turn towards Russia” and is formed on the basis of “full-fledged cooperation with Moscow”. This is “an almost unprecedented diplomatic victory for Russia,” the expert believes. In just two years, the Russians have managed to "turn a potential enemy into one of the main guarantors of the peace process in Syria."

The result of this war in Syria was the “new Middle East,” says Pierraccini. Players like Riyadh, Tel Aviv and Washington, formerly regional puppeteers, were apparently “more or less intentionally” cut off from the decision-making process. Of course, it can be argued that Washington played a role in the defeat of the IG, but Trump's policy protects America from direct participation in such conflicts.

The reality that the trio of forces and the Syrian army won over terrorists of all stripes and shades in the region has pushed the United States and its allies into the background. This situation does not mean that Washington would dictate its rules of the game either to Syria itself, and even less to the key players who helped liberate this country from jihadists.

And even though Mr. Trump has not officially “allowed” Bashar Asad to rule until 2021, this outcome is obvious. If only because the White House does not have a significant impact on the situation in Syria. Now it is accepted to reckon with the opinion of Moscow.

Ctrl Enter
Noticed oshЫbku Highlight text and press. Ctrl + Enter
We are
Syria: Bashar Assad comes, and for that he will not be allowed to attend the Olympics in LondonSyria: Americans scare themselves, and Asma Asad buys chairs
19 comments
Information
Dear reader, to leave comments on the publication, you must to register.