From geopolitical clashes to Olympic aspirations: the brink of confrontation between the West and Russia

December 12 2017
81
American Secretary of State Rex Tillerson, who was not eager to spoil relations with Russia before being appointed to the post, now finally admitted: the restoration of relations with Moscow at the current stage is impossible. And indeed, what a recovery there is! The 2.0 Cold War is in full swing. Its signs are shown everywhere - from geopolitical clashes to Olympic aspirations. 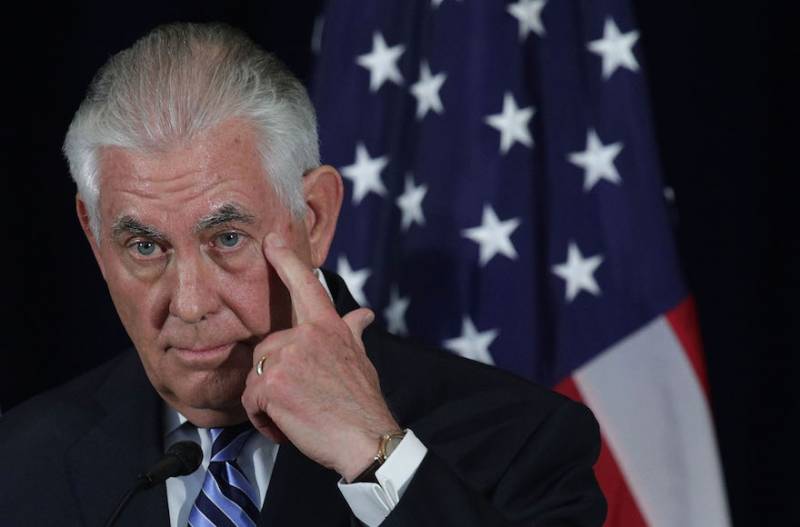 US Secretary of State Rex Tillerson, avoiding hints and half-hints by his old habit, explicitly stated that Washington would never agree with the “Russian annexation” of the Ukrainian Crimea. The sanctions imposed on Moscow because of the aforementioned annexation will remain in effect until Russia regains control over the Crimea to Ukraine.

Such an unequivocal statement, we note, is completely within the policy that Mr. Obama initiated even before leaving the presidency. It was Obama, and behind him the US allies in Europe, stated that they “never” recognize the Crimea peninsula as Russian territory. And did not recognize.

Sanctions since the time of Obama expanded several times. In this sense, the Trump Republican team consistently continues the line of Democrat Obama. There is something like the unity of the foreign policy line. Probably, such a line is very convenient to Trump: he is an ardent supporter of the arms race, just like his idol Reagan. It is precisely due to the growth of the military-industrial complex that Trump plans to "make America great again."

Meanwhile, Putin is making his country "great". At least, the idea of ​​arming is present in Russia in recent years more than ever, and even despite lower oil prices, from which the budget gets the lion's share of its revenues along with gas.

Mr. Tillerson made his loud statement before meeting with his colleague Lavrov. The moment was calculated precisely: there are no prospects for US-Russian relations either in the short term or in the medium term. Even Trump's successor will unravel the porridge made under Obama.

To characterize the period of the cold war 2.0 can be in two words: polar differences.

Crimea, eastern Ukraine, Syria, the inconvenient figure of Assad for the USA, “the intervention of Russian hackers” in the American elections, again “interference in the elections”, already in Europe, are around contradictions, partly real, partly artificial, and against their background blooms and smells propaganda paranoia. American politicians, like European ones, see Putin’s hand everywhere (and even his “ghost”, joking gloomily some analysts), and the Kremlin, with its failures in domestic politics, chose the United States as the scapegoat.

What kind of reconciliation is there, if one side needs the said "goat", and the other - an arms race!

“We will never agree with the Russian occupation and the attempt to annex the Crimea. The sanctions associated with the Crimea will remain in force until Russia regains control over the peninsula of Ukraine, ”he said. "Voice of America" Mr. Tillerson, responsible for the foreign policy of the American chief.

He sealed the Trump minister and Donbass: “As far as eastern Ukraine is concerned, we join our European partners in maintaining the sanctions until Russia withdraws its troops from the Donbass and fulfills its Minsk commitments.”

Tillerson, in fact, repeated what he had said the day before. A day earlier, while in Brussels, he popularly explained: there can be no normal relations with Russia until the Kremlin stops supporting separatists in Ukraine and returns the Crimea peninsula to Kiev.

And in the city of Brussels, Mr. Tillerson was not anyhow somewhere, but at a dinner with persons from NATO, namely with the foreign ministers of the countries of the alliance.

Speaking before the meeting, Tillerson said that, “by continuing to use the means of hybrid warfare, Russia is trying to shake Western institutions” by means of state-supported computer attacks and a disinformation campaign on the Internet. “This is a significant obstacle to the normalization of our relations,” the same Voice of America quotes him. Finally, at the same dinner, Tillerson accused Russia of interfering in the US 2016 election of the year.

His most scandalous statement was, nevertheless, a statement about the "war" of Russia in Ukraine.

America’s chief diplomat publicly stated that only one thing really stands in the way of “normal relations between the US and Russia.” It is Ukraine.

Relations with Moscow today have become cold to the lowest point since the days of the former cold war. And the biggest obstacle, according to Tillerson, is the "permanent role of the Kremlin" in the war in Ukraine.

"The problem that stands in the way is Ukraine", - quotes "Foreign Policy" Tillerson's speech at the Organization for Security and Cooperation in Vienna.

Tillerson has no doubt that the Kremlin is arming, waging war and training fighters of "anti-government forces" in eastern Ukraine.

“We may have discrepancies in other arenas, in Syria, we may have discrepancies in other areas, however, when one country invades another, this is a difference that is hard to miss and difficult to reconcile,” said Tillerson. “This is the only and most difficult obstacle facing the normalization of relations with Russia, which we would very much like to do.”

At the same time, “Foreign Policy” notes, Mr. Tillerson has been saying for several months now that normalizing relations with Russia is one of the main priorities of Trump’s foreign policy.

Another front of the Cold War is still the Olympic wrestling, which in recent years has become a struggle against "Russian doping." Here, too, there are "discrepancies." And here, too, the West intends to stand on its own until the end (obviously, until a new victory in the new cold war). And the Western "struggle" has brought its results, and very tangible.

Due to the non-admission of the national team of Russia to the Winter Olympics under the national flag in the country there was a real split. Some citizens (and other athletes with them) believe that it is necessary to go to the games in a neutral status: you should win and defend the country's honor at least in this way. Other citizens (and with them other athletes) believe that it is a shame to dance to the tune of the West and go to the Olympics under the white flag. Very big celebrities are involved in the dispute. The West can rejoice: it has really achieved its goal and has split sports Russia from the inside.

“I have seen many victories of the USSR national team. And for me to go to the Olympics in a white form is the same as throwing the white flag, ”wrote Vladimir Plyushchev, deserved trainer of the Russian Federation, on the Internet. - My opinion: Russia should not agree to a handout with a neutral status.

Alexander Karelin, a participant in four Olympics and a three-time champion in Greco-Roman wrestling, has the opposite look at the problem.

“I prefer to ignore such cries [about the boycott]. They have nothing to do with our place in stories Olympic movement. I am deeply convinced that if we now maintain our reputation as a sports power even in neutral status, we will express our gratitude to the organizers of the games in Pyeongchang and South Korea itself. And, obviously, we will earn the respect of the world community ", - leads his opinion "Free press".

"SP" asked Vitaly Milonov, State Duma deputy: "Then tell me, please, was Vitaly Mutko's possible fault, who was the Minister of Sport for many years, and now the Vice-Premier of the Russian Federation responsible for sports, discussed at Okhotny And his colleagues, Alexander Zhukov, who heads the National Olympic Committee? Justly punished both the IOC? "

"As far as I know, was not discussed."

And this is the whole answer!

“I can only say one thing about this: apparently (I guess so), there are people in the State Duma whose interests do not include discussing the activities of the same Vitaly Mutko as sport minister and his relationship with Grigory Rodchenkov.”

Meanwhile, V. Zhirinovsky issued a call to hold a referendum on the participation of Russian athletes in the Olympics-2018 and referred to the "Vlasov form". “Let the people decide. Or we will take a tough stance and make everyone [respect us] respect, or we all wear the Vlasov uniform, the Olympic uniform, and we will be silent about the Russian flag and Russian anthem in Russia, ”Zhirinovsky quotes TASS.

Zhirinovsky, of course, is not a decree for Russian athletes. They have already gathered for the Winter Olympics. Yes, under a neutral flag. And this means one thing: the victory of the West in the next stage of the Cold War.

The other day the Russian national team in luge has unanimously decided to play at the Olympics under a neutral flag. This was reported TASS Natalia Garth, President of the Russian Luge Sport Federation.

Actually, why not? The Kremlin does not mind.

The President of Russia has nothing against the country's athletes representing her at games without a flag. Putin said that the authorities will not prevent the participation of those who agree with the terms of the IOC.

That is why Tillerson with his directness and said that the restoration of relations with Moscow at the current stage is impossible. Why now restore something?

The West has no doubt that sanctions because of the Crimea and Olympic bans weakened Russia. When the enemy is weakened and agrees to the "neutral" flag, the attacker already considers himself the winner. The West in the face of Tillerson, and at the same time in the faces of NATO ministers, is waiting for Russia to lose completely - and then it will impose its own conditions on it. So it was under Yeltsin. Now the Americans want victory in the second cold war.

Observed and commented on Oleg Chuvakin
- especially for topwar.ru
Ctrl Enter
Noticed oshЫbku Highlight text and press. Ctrl + Enter
We are
Project "ZZ". Trump administration will accuse Russia of the gravest sinSituational analysis of the death of the MH17 flight (Malaysian Boeing 777), made on the basis of engineering analysis from 15.08.2014
Military Reviewin Yandex News
Military Reviewin Google News
81 comment
Information
Dear reader, to leave comments on the publication, you must to register.