The first is poisonous. Part of 2. Not one step back

December 15 2017
18
Now it was the turn of the onslaught of the German infantry, which, like Ypres, was counting on the success of its offensive, because the gas strike was supposed to shake the defenses of the Russian troops.

At about 4 hours, the enemy’s artillery from the Bolimov and Skierniewitz forest opened fire on a section of the height. 45,8 - Folv. Mogels - moreover, shells with a burst emitted suffocating gases. 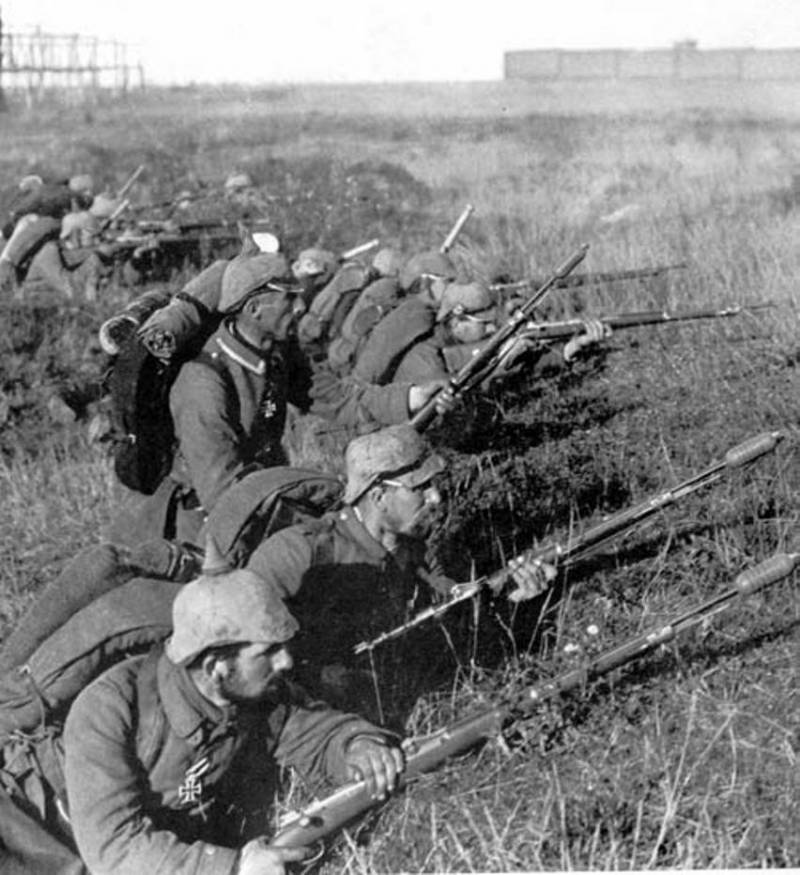 German infantry before the attack.

Despite the failure of three quarters of the 1 th defensive line personnel, the German attack on the 5 watch was repelled - with accurate and strong fire from the fighters remaining in the ranks. Artillery fire (both enemy batteries and attacking infantry) completed the success of the defenders.

Despite the fact that the suffocating gases, spreading through the trenches of the first line and the reserve, reached artillery positions and incapacitated every minute more and more fighters, the latter, overcoming agony and barely keeping their feet, remained in the ranks and, with the support of 1 th and 3 light batteries of the 55 artillery brigade, 1 of the Warsaw fortress battery, acting on the flank of the enemy advancing in the direction of Will-Shidlow, and 2 of the Warsaw fortress battery acting on the enemy batteries, met the advancing delving into heavy fire and forced him to withdraw with heavy losses in their trenches.

In the sixth hour, an enemy accumulated at Voly-Shydlouska distillery, and then the Germans launched an offensive on the 217 Infantry Regiment - north of the Bolimov-Medniewice route and on Will Shidlovskaya. The attacks, despite the difficult conditions in which the Russian fighters had to fight, were also repulsed.

Despite the fact that the sufferings of the fighters and the casualties reached their apogee, the defenders of the front line, together with the artillery, met the enemy with honor and repulsed the attack for the second time - around 6 in the morning.

At about 6 hours the battalion of the 219 Infantry Regiment was moved from the reserve to the command of the combat unit.

Around 7 hours under the cover of hurricane artillery fire, the Germans launched an offensive in the sector of the 14-th Siberian rifle division. The accurate fire of the Russian machine-gunners and artillerymen stopped the enemy offensive, forcing the enemy soldiers to lie down.

The offensive began and on the right flank of the 218 Infantry Regiment of the 55 Division - it was also beaten off, and the Germans with large losses retreated to their original positions.

Despite the great losses of this sector from the suffocating gases, the enemy’s attack was met with hurricane rifle and machine-gun fire and was beaten off - and the enemy not only withdrew with great losses, he was dispersed.

In 14, the hours before the battalion of the German infantry, with the support of artillery, went on the offensive south of Volya Shidlovskaya - in the area of ​​the 217 infantry regiment. The remaining fighters reinforced by the 4 Battalion of the 217 Regiment, together with the support of the artillery, unanimously repulsed the attack, forcing the Germans to 14 45 minutes with heavy losses to retreat to their original lines.

Attacks on 14 hours 50 minutes and 15 hours 45 minutes were also repulsed.
The first was conducted on the site of the 217 Infantry Regiment north of Volya-Shidlovskaya - and was repulsed to 15 45 minutes.

About 19 hours opposite der. Humin, as well as on the right flank of the 55 of the Siberian Rifle Regiment, repeated attempts of the enemy offensive were reflected - the latter with artillery fire thrown at Bzura. Captives were taken.

In 22 hours of 30 minutes, the Germans again attacked the site of the 217 Infantry Regiment south of Will Shidlovskaya - after 15 minutes the offensive was also stopped by fire, and the enemy retreated to his trenches.

Finally, around 24 hours, the Germans launched another attack - on the site of the 55 Siberian Rifle Regiment. She also managed to fight off artillery and machine gun fire.

By the end of the day, the sector was reinforced by additional troops.

The total losses of the Russian troops during the first gas attack of the Germans amounted to more than 9000 people (of which 1183 people died). 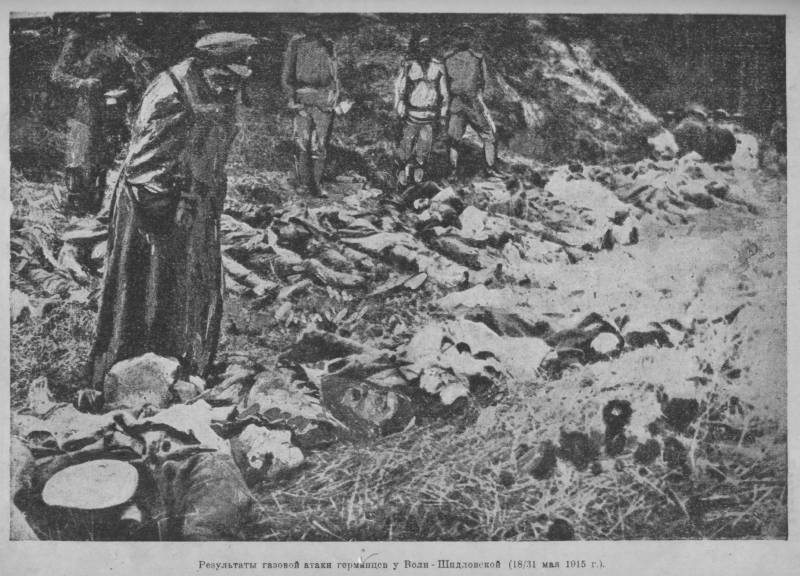 Conducting a tremendous work on organizing a gas balloon attack on a broad front, the Germans, like Ypres, could not achieve a breakthrough of operational scale. Moreover, in the case of the Russian troops, they were not able to achieve even tactical success (with the exception of causing great losses to the Russian troops). The stubbornness of the German infantry attacks committed after a gas strike and with the support of artillery using chemical ammunition was broken by the stubborn resistance of the Russian troops, who had time to close the breakthrough that had begun to form. Greater stamina and a greater moral boost than the infantry and the Siberian arrows of 18 in May of 1915 showed, it was impossible to show. The spirit of panic caused by the realization of helplessness was absent in parts. The troops, acting without gas masks, repulsed the enemy's 9 attacks, remaining in advanced trenches, and despite huge losses (such as in the 217 regiment), continued to occupy their sections until the shift that occurred on 25. there is a week later). Both individual fighters and the commanding staff took all possible and affordable measures in a timely manner - and control, despite the unexpected effect of the gas strike, remained in the hands of the commanders.

Of particular importance for repelling chemical attacks was the presence of reserves - and the actions of the Russian reserves, and in a difficult situation, played a crucial role in repelling the enemy's massive gas attack. And if the defenders Osovets had at least some protective equipment (so-called "protective dressings" - dressings made of gauze soaked in hyposulphite and glycerin; besides them, each fighter had with him a small tin of water to wet the gauze; had to breathe through gauze, and a small amount of anti-gas impregnation available in it, quickly spent, and such a bandage- "gas mask" lost its value) and on the basis of the first experience, the first elements of the chemical discipline of the troops began to appear, then 18 of May 1915 of the mask and gas masks were missing. The 18 gas attack of May was reflected without gas masks - that is, defenseless troops, "in the open." The Russian troops could not oppose the technical countermeasures to the enemy - by opposing their courage, firepower and competent tactics. 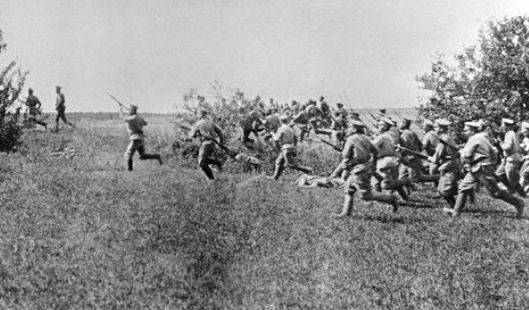 Counterattack of the Russian infantry

Documents mark the feat and call the names of some of the heroes who distinguished themselves on that difficult day. AT stories The 55 of the Siberian rifle regiment, the 18 day of May, was considered an outstanding feat when “the Germans released poisonous-asphyxating gases before the attack. Despite the fact that the regiment did not have gas masks, the 1 day of the lower ranks was out of order in 2500, the regiment repulsed several enemy attacks and held the position. ” [RGVIA. F. 16180. Op.1. D.63. L. 169]. And the 217 Infantry Regiment of the Kovrov Regiment "18 of May 1915, when the Germans attacked the regiment with the help of choking gases, despite the poisoning, the attack was repulsed and the enemy could not take possession of a single inch of the land." The officers awarded for him with the crosses of St. George of 4 degree are especially distinguished: the regiment commander Colonel Osipov, the staff captain Antonov and the second lieutenant of Krishtops, and the lower ranks awarded with St. George crosses of the 4 and 3-th degree, and George's crosses, and the ranks for the number of people who have received the crosses of St. George's XNUMX and XNUMX and the St. George's crosses. , Ivan Shandov, Ivan Titov, Mikhail Larin, Ivan Panfilov, Ivan Golunov, Mikhail Potapov, Nikolai Voronov, senior non-commissioned officers Dmitry Ponomarev, Mikhail Zelenkov, Alex Trinkunov, Mikhail Veselov, Ivan Kopysov, Fyodor Danilenko, Illarion Lopashev, Georgiy Pe seizures, Dorofey Krivenko, junior non-commissioned officers Ivan Dinischuk, Ignatius Sorokin, Ivan Gorshkov, corporal Platon Svistunov, Ivan Pisling, Afanasy Maximov, Fyodor Mikhailov and many others [RGVIA. F. 16180. Op. 1. D. 63. L. 279 - 279 Rev.].

First exposed to the blow of the newest weaponsand then a whole series of Germans infantry attacks, Russian troops without chemical protection (!) resisted. In contrast to the situation under Ypres 22 on April of the same year, when the German troops managed to seize a significant part of the Ipres projection, the Russians did not surrender a single inch of land to the Germans. Only the Russian army could probably fight without any means of chemical protection and at the same time survive.

The Russian command for the month that had passed since the attack of the Ipris attempted to take some kind of protective measures (the order of masks and gas masks), and in the course of the battle used fire weapons and skillfully maneuvered reserves.

We named the names of only some of the heroes who committed a massive feat during the reflection of the first chemical strike in the history of the Russian army - and they should be written in golden letters in the chronicle of the exploits of the Russian officer and soldier.