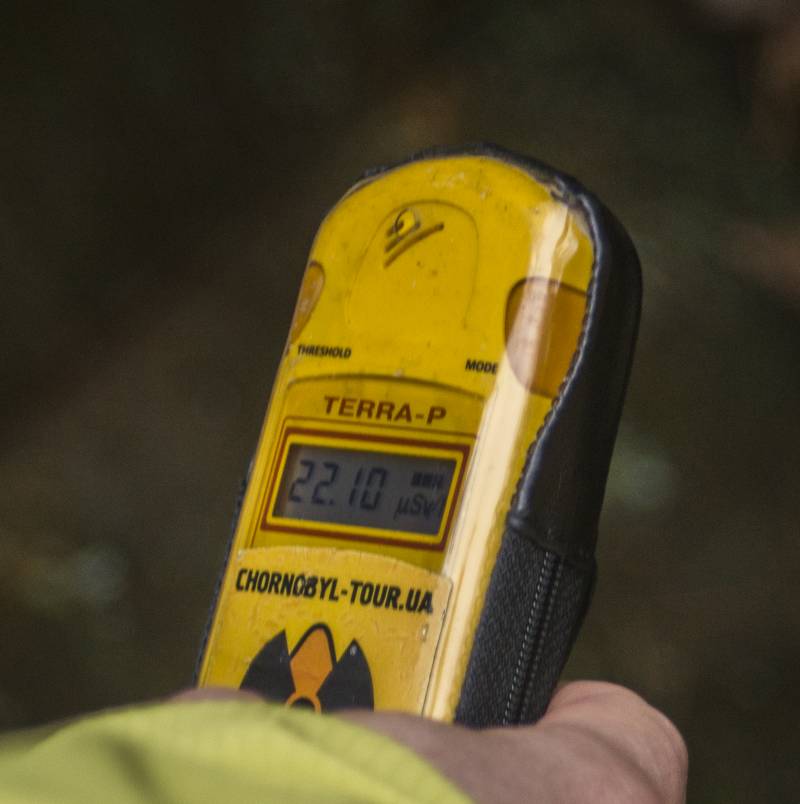 Greetings to you, my dear and very necessary people to me. Readers and readers, young and sophisticated life experiences, beautiful and intelligent, shaved and bearded, hairy and bald. I greet everyone together and everyone personally.

In several articles I tried to combine reflections on events in Ukraine and my own photo stories. But even despite your comments, I realized that two such voluminous topics are difficult to combine into one. It turns out that both topics have to be squeezed to the state of dried fruit.

Therefore, having thought well and asked for the permission of the editorial board, I decided to gobble up another type of my narratives. The photographs that I already have and which will still appear are purely mine, a crap look at life. Maybe the right one, maybe not. But my.

I remembered a mathematician here. George Danzig. He got into about the same situation while still a graduate student. As often happens with young people, George somehow slept at the beginning of the lecture. I rushed to the university, and the couple is already, in a sense, over. Only on the board is some kind of equation written down. He returned home and a few days reproached himself for the missed lecture. Already very difficult was the equation. But decided!

Satisfied, brings the decision to his professor and sees that the decision somehow badly affects the face of the teacher. In general, it turned out that the graduate student solved two unsolvable problems in statistics, which many scientists from all over the world were beating on. So that's me. Maybe accidentally opening a new genre in journalism will do ...

So, today I will tell you and show some more of the materials about Pripyat and Chernobyl.

And the first thing I wanted to say is about those who lead tours there. About guides. Or guides who very sensibly explain the events that occurred in 1986 year. But on the other hand, already at the approach to the Chernobyl Nuclear Power Plant, it is explained that the new safe shelter (confinement) is nothing more than an exemplary cut of the budget. 44 countries have allocated Ukraine 2,5 billion to germoarku.

Probably, now you thought that the Cockroach had messed up something. 44 countries! This is how many engineers and scientists? Did they not say that this project is complete, but expensive, stupid?

Have told. And proved. Moreover, in these countries, like us, there was not a single engineer who would agree to give an expert assessment of the sarcophagus. About the ability to contain radiation and emissions say. But about the timing of no. Who knows, this sarcophagus. The roof is not sealed. Some precipitation is pumped out to 1000 tons per year.

The main thing that I planned was. Between workers (do not be surprised, but there are a lot of workers and engineers) to knock. Talk to listen. Take pictures where the guard will not notice.

By the way, the security at the Chernobyl NPP is notable. Full set. From a few hundred of the National Guard on horseback patrols and all flying video cameras. I don’t even want to write about the primitive thorn everywhere. The mouse will not slip. Only a cockroach. This, by the way, explains the periodic reports about the detention of all stalkers.

I listened to the guards. It is necessary to understand what is all the matter. The case turned out to be really serious. In the 2013 year, when the Maidan was seething and passions going off-scale, several scumbags tried to enter the territory of the Chernobyl NPP. And not just to penetrate, but to wet septic tanks and collect spent nuclear fuel there. For what? About the "dirty" bomb heard, I hope? Good caught them.

Even more interesting was to knock around among the hard workers. I did not divide them there. People walk in robes and gas masks. Who is who? But in the rest room everything was clear. Work at the station Ukrainian and European shift workers. The object is complex. Dangerous. Therefore, the corresponding salary. From 5 000 and up! Only each employee receives "their" money. Europeans - euro, Ukrainians - hryvnia.

Remember, I already showed you a few photos from the zone? There was a frame, which depicts robots used in the elimination of the disaster. Fonti they even today beyond. 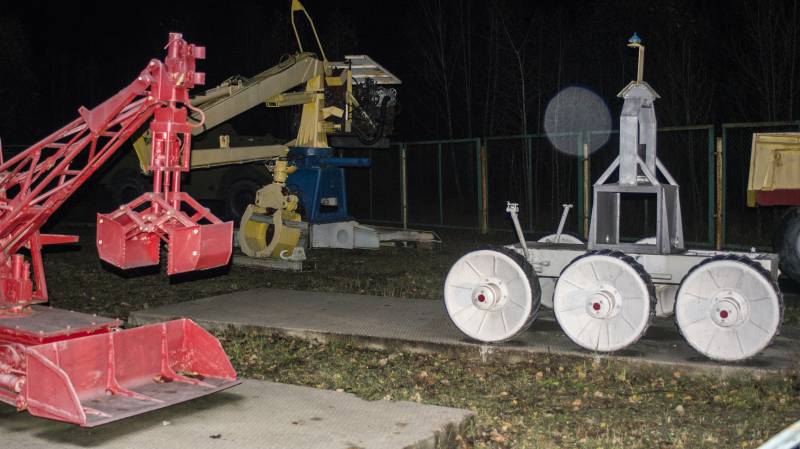 And I remembered them because I heard the news that struck me. Soon they will begin to disassemble the 4 power unit! Right under the new arch. Work has already begun. 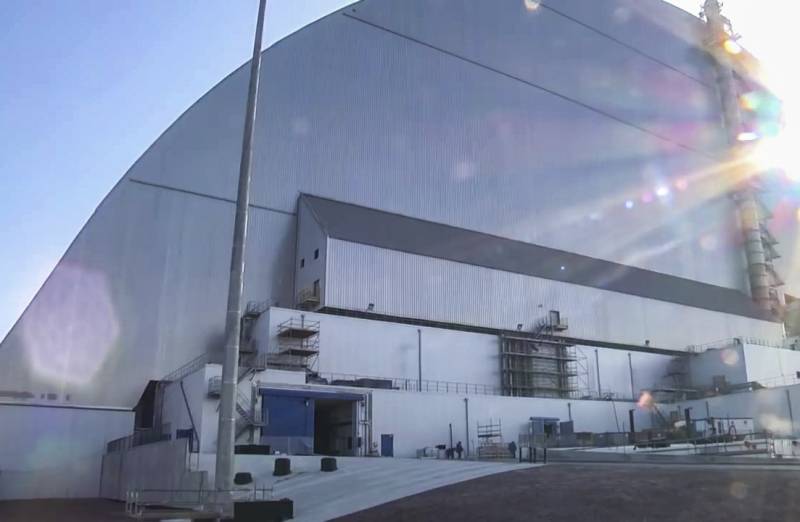 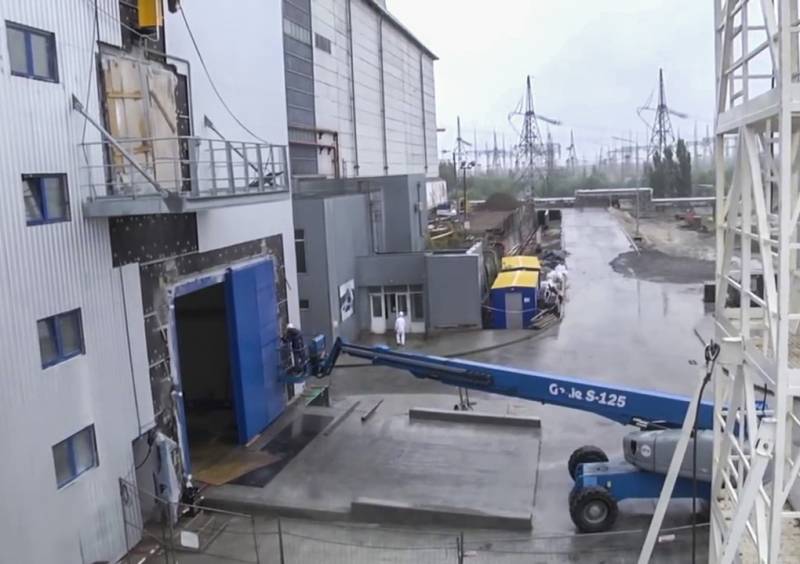 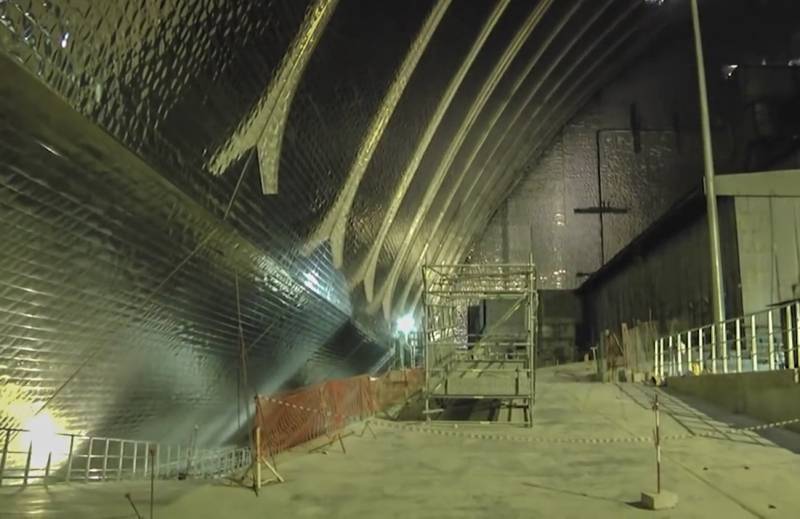 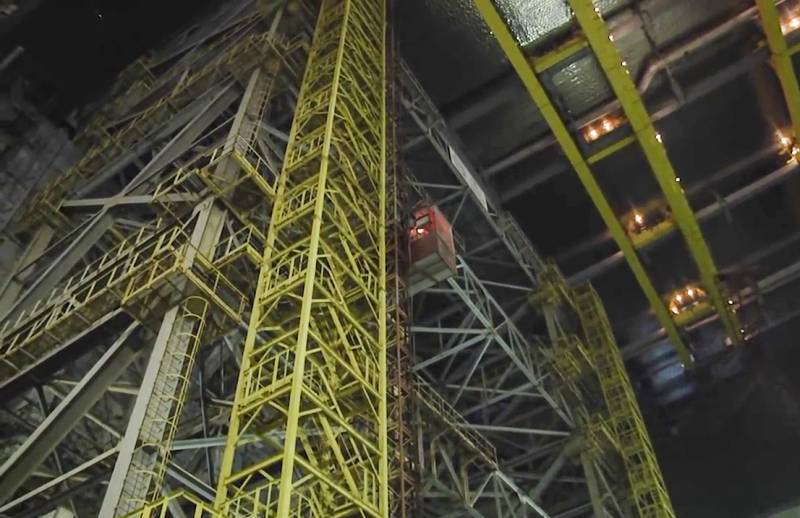 So, there is no new robots there! And there are no cars with remote control! Will disassemble the workers! I do not know what to call these people. Heroes? Probably. Only here is some kind of artificial heroism. Going to death to save the state? In order for the extra hryvnia to go into someone's pocket? I have no answer ... 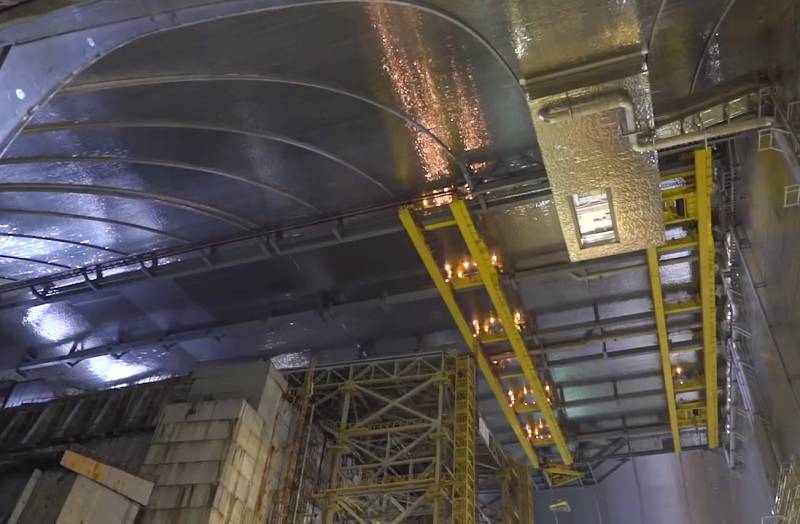 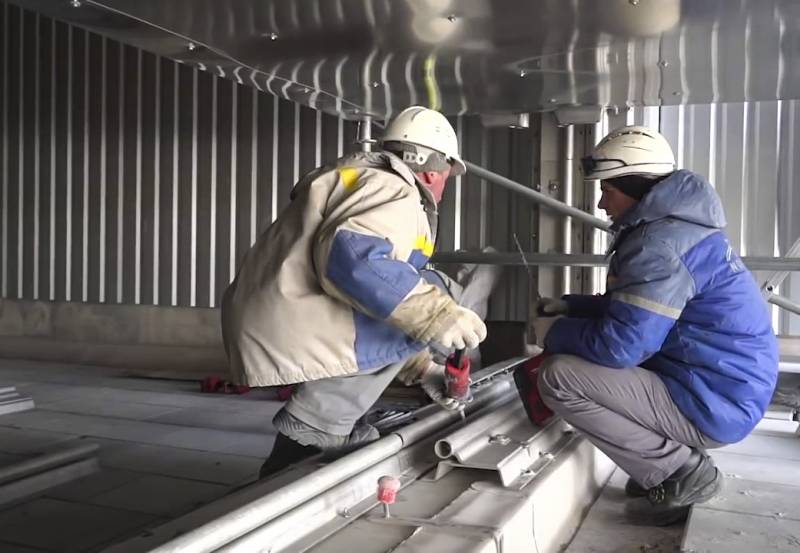 I was often tormented by thoughts about why the Chernobyl NPP was completely shut down, and the rest of the nuclear power plants on the territory of Ukraine, using exactly the same reactors, are working. Something does not add up to me. Europeans do not understand that experiments with RBMK reactors are dangerous? Or is it all safe? Especially in our "experimental" time? I had to go deeper. Where there are thinking brains.

It is plutonium with the least amount of impurities and the highest purity that is obtained when the uranium rods are produced in the RBMK reactors. Our friends from NATO do not see our experiments at nuclear power plants for a reason. They think!

And if they think, they see what? That's right, the source for the accelerated production of high-quality weapons-grade plutonium. Ask Korea and Iran what it is worth launching such a reactor. Good old probable adversary does not shy away from arranging BelorSima and Kievsaki in the 21 century with the help of concrete bombs, the benefit of declaring Ukrainians carriers of communism and terrorists is not a tricky matter, a matter of desire.

It seems we are being tolerated today, thankfully, we seem to be the foremost stronghold of democracy in the struggle against Russia. But how will it turn tomorrow, who knows ...

These are my conclusions ...

That is why the Chernobyl nuclear power plant and mothballed, and, despite the fact that 1 and 2 units could work and work, Europe firmly said: no. Ukraine has enough stations that operate on VVER-type reactors. And about the Chernobyl NPP with its RBMK forget from here and forever.

And considering that we are still monkeys with a grenade, then away from sin in Europe they want it to be an ordinary grenade. Not nuclear bomb.

What we stopped there, on the bans? Even on the bus, all the tourists are warned that it is forbidden to rent everything in the Chernobyl NPP area. For example, a monument and a sarcophagus on the background of it is possible, and the nuclear fuel storage on the left is not, the railway too.
And if you find yourself a warrior who is not too lazy to look out the window, then you are faced with formatting a flash drive and a long and tedious explanatory note that you are not a terrorist and you are not looking for intelligence information here. And it will be a good outcome!

They can bring the handcuffs in the Security Service of Ukraine (SBU), because they also have months to fight the Kremlin agents in the Zone and then prove that you are not a camel. Or not an agent of the FSB. 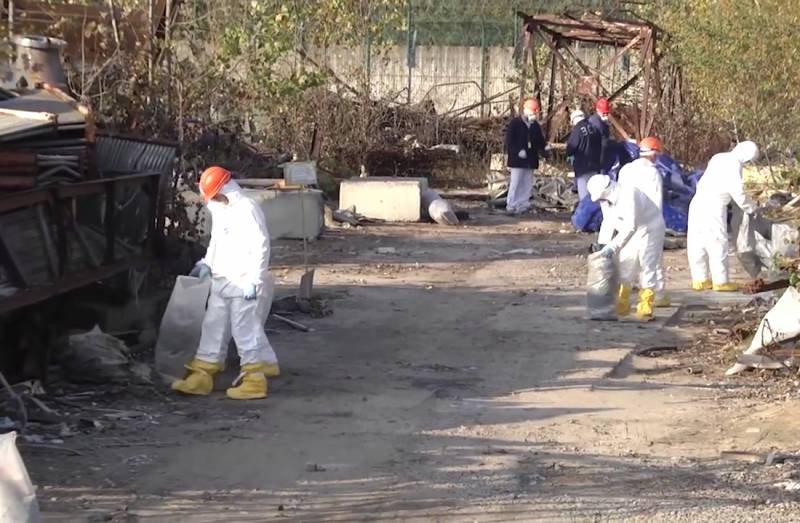 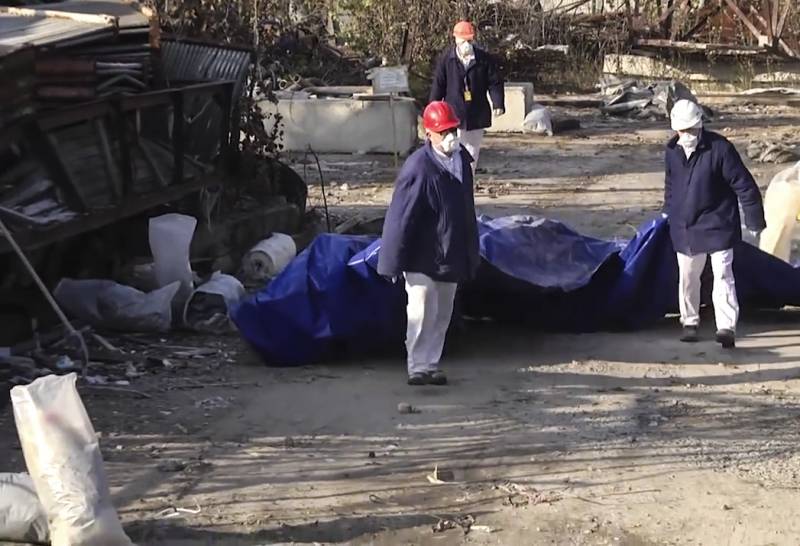 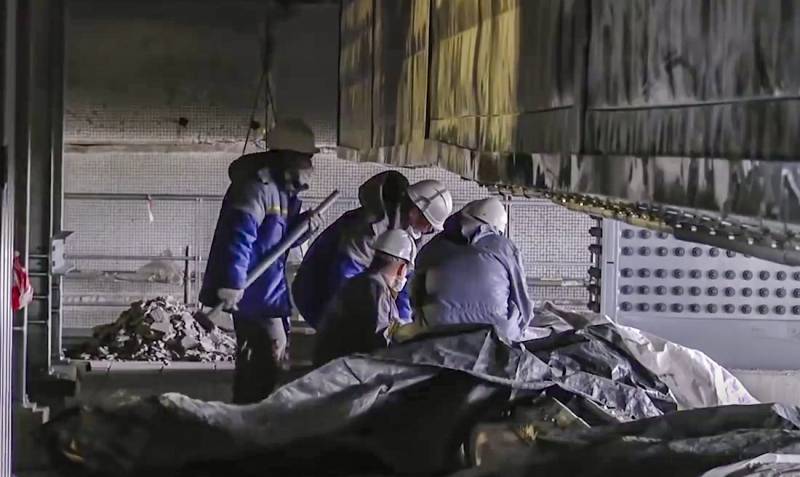 I do not know how you will respond to my report, but I think that you should also be interested in what, God forbid, you can touch Russia and Belarus. And life goes on. Runs to the end of the next year. The next point of reference. And I run. More precisely, we are running with you. Healthy lifestyle.

So we will not stop. See you soon and happiness, health, good luck! Well, when you are, dear people-readers!

Ctrl Enter
Noticed oshЫbku Highlight text and press. Ctrl + Enter
We are
Results of the week. "Well, do not change me because of every idiot!"Yuri Drozdov: Russia prepared the role of the sacrificial calf
Military Reviewin Yandex News
Military Reviewin Google News
10 comments
Information
Dear reader, to leave comments on the publication, you must to register.