November 20 2017
12
Fans of the current American president always emphasize that today a successful businessman has come to the management of the United States who has made his billionth state. Less often they say that the main success of Donald Trump was noted in the field of entertainment shows popular in America. Longstanding passion for this business has not passed for Trump without a trace. Under the leadership of the new president, American international politics began to incubate false assessments and impressions that prevail over real content. In it appeared elements of lightheadedness and frank bluff, so characteristic of modern shows. 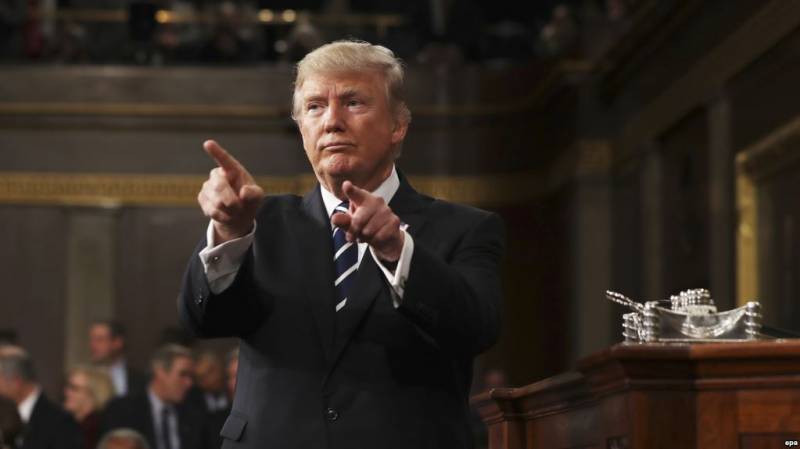 All this was fully manifested already during the first foreign visit of Donald Trump to Saudi Arabia. There was a saber dance performed by an American guest along with Arab leaders, and a metaphysical rite over the Earth globe with the participation of Saudi King Salman, President of Egypt Al-Sisi and Trump himself.

Over time, the pictures of these actions faded into the background. They were overshadowed by the practical results of the visit. In the Saudi capital was a record in the American stories arms deal. This hurried to please compatriots, White House spokesman Sean Spicer.

"In Saudi Arabia, the president has just made the largest one-time defense deal in American history, completing package negotiations (weapons) worth more than 109,7 billion dollars," Spicer wrote on his Twitter page. News caught Trump's aggressive opponents off guard. They even relaxed from the fact that Saudi money was going to America, and for a while they reduced the degree of criticism of Trump.

The meticulous experts rummaged in search of the texts of the concluded contracts, but found only a list of weapons, military equipment and services, which the parties agreed to when negotiating. The list is big. There is a battery of THAAD anti-aircraft and missile defense systems, Patriot anti-aircraft missile systems, Bradley infantry fighting vehicles, self-propelled and towed artillery howitzers and other joy for the Saudi military.

Against each position in the list was indicated the value in US dollars. For example, for the THAAD battery, Saudi Arabia agreed to pay the United States $ 13,5 billion. The amount is comparable to the recent spending of the Saudi kingdom on the purchase of weapons during the whole year. This circumstance forced the experts to look closely at what is really the advertised results of the talks in Riyadh.

It turned out that for the most part these are agreed agreements of intent. Sometimes, they do not even wear the final specifics. As is the case with Lockheed Martin’s delivery of a whole series of coastal corvettes. The amount of this supply is agreed - $ 6 billion, the exact number of ships built under the project is not. For a practical contract is not typical.

Later it turned out that the program announced by the White House will be implemented for ten years (from 2018 to 2027), that is, it goes far beyond the presidency of President Trump. In principle, the situation in the practice of arms trade is familiar. As a rule, at first the parties agree on an exemplary package of deliveries, then in the protocols of intentions determine their conditions. At the final stage of the transaction contracts are concluded, where everything is reflected - from the detailed specification of the order to the terms of its execution.

At any of these stages it is possible to adjust the terms of delivery, its cost, or even the refusal to continue the transaction. Meanwhile, the Trump administration presented the country and the world agreed positions in Riyadh as a final decision, after which American wallets should be pleasantly rustled by $ 110 billion. In fact, this is still a very long road, with an unclear end.

"Chinese miracle" was dissolved in the wording of the text

While experts understood the intricacies of the Saudi deal, President Trump turned his attention to the Far East and decided in one fell swoop, as they say, to bring North Korea from heaven to earth. In the summer, Donald Trump said: "The patience of the United States over the actions of Pyongyang has dried up."

This was the first hint of a military strike on the territory of the DPRK. At the very least, CNN, citing its sources in the White House, said that "Donald Trump will use military force against North Korea if Pyongyang conducts another ballistic missile launch or an underground nuclear test."

Soon this was publicly confirmed in a speech by Herbert MacMaster, Assistant to the President of the United States for National Security, at a forum of the Center for New American Security in Washington. General McMaster said there: "We must prepare all possible options and in the coming days and weeks to increase pressure on Pyongyang."

By the time of all these statements near the Korean Peninsula, three US carrier groups had already cut circles. However, the pressure of the Americans only provoke the North Koreans. They not only did not suspend their tests, but began to show new missile capabilities in range, altitude, and other parameters. Not even the threat of the complete destruction of North Korea helped.

American aircraft carriers also conduct exercises today in the waters close to North Korea, but the rhetoric of the American administration has noticeably subsided. Trump, as they say, "was blown away" and again started talking about finding a diplomatic solution to the crisis around North Korea. American bluff did not shake Pyongyang. The world realized this and saw in the inconsistency and indecision of Trump the reputational losses of the United States. (“If you can’t hit it, don’t swing it.”)

The picture, when the desired is given for reality, could be observed during President Trump’s recent tour in Asia. There have been several episodes of apparent bluffing. Of these, it is worth highlighting the agreement with China, which the American media called the “Chinese miracle.”

As reported by The Independent, during the visit of President Donald Trump to Beijing, the United States and China signed trade agreements worth 250 billion dollars. The news was presented as an outstanding sensation. The announced deal allowed to reduce the monstrously increased trade imbalance between countries.

A sharp increase in sales to China of jet engines, auto parts, energy carriers, chipsets, etc. was expected. Experts alerted the news immediately. The world managed to make sure that the Chinese are difficult negotiators. And suddenly such an inexplicable malleability. His main achievement Trump announced an agreement on Chinese investment in natural gas production in Alaska.

Strictly speaking, gas production was not limited. The Chinese are trying to invest 43 billion dollars not only in the development of gas fields, but also in the creation of capacities for the production of liquefied natural gas. Under the project, China will annually buy 20 million tons of LNG from the USA. Such is the American interpretation of the agreement reached.

Mindful of the fate of the Saudi billions, the experts delved into the text of the document and found a very strange formulation. She was quoted in her report by the American agency Bloomberg: “The Chinese side expressed only“ interest in the possibility of ”buying LNG from Alaska.

At the same time, Beijing will take the final decision on investments in this project and future purchases of American gas not earlier than the fourth quarter of 2019. In a word, there is again ahead uncertainty, issued for the great diplomatic success of the American administration and President Trump personally.

Upon returning to Washington, American attention shifted to the global energy market. Controlled by the United States (during the acute crisis of the seventies of the last century, the United States created it in opposition to the organization of oil exporting countries - OPEC), the International Energy Agency (IEA) published a scenario for the development of the global oil and gas market up to 2040.

The news, sad for Russians, readily spread the mainstream American media, convinced that the low price of oil would not allow Russia to develop hydrocarbon fields on the shelf. But in the United States themselves will miraculously increase the production of shale oil.

It's funny that the progress of oil production in the United States is based on an increase in the price of oil by 2025, to 83 dollars per barrel (at the end of 2016 year), and by 2040, to 111 dollars. OPEC experts were surprised at such a frank manipulation of the oil price forecast (for Russia it will fall, for America it will increase).

They operate on completely different data. Today, Russia's proven oil reserves amount to almost 16 billion tons. In America, confirmed reserves only 4,5 billion - three times lower than the Russian. OPEC predicts that Russia will maintain its leading position in the oil market and production growth by about a percent from the current level. So failed another attempt by Americans to wishful thinking.

Actually, the bluff came into our vocabulary from a card game. There are bluffing players with frankly weak cards. It seems that the American deck has diminished trumps, since the USA is increasingly bluffing in international politics, despite the obvious reputational losses.

Ctrl Enter
Noticed oshЫbku Highlight text and press. Ctrl + Enter
We are
Reports from the militia of New Russia for 27-28 September 2014 of the yearResults of the week. "Well, do not change me because of every idiot!"
12 comments
Information
Dear reader, to leave comments on the publication, you must to register.