And not a friend, not an enemy, and so 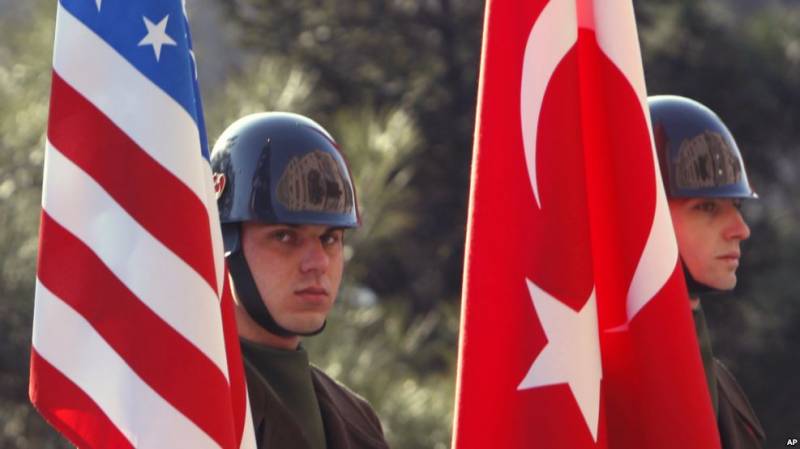 The international coalition, allegedly destroying terrorists in Syria, has long been no longer a camp of like-minded people united for the sake of a common goal — the overthrow of Assad. Today, the Western allies are pursuing a purely national interest in Syria, in pursuit of which they neglect not only international principles and norms, but also often overstep the limits of what is permitted.

In the camp of the Western allies, who are known to take part in hostilities on the territory of Syria without the permission of official Damascus, there are serious contradictions. Yesterday's comrades-in-arms and like-minded people who are ready to do anything for the common “good” - the resignation of the current regime, in trying to grab a bigger piece from the “Syrian loaf” accuse each other of complicity with world terrorism and find out who has more rights to be in the Arab Republic.

Earlier, the US government has also been accusation of sponsorship of terrorist organizations and the preparation of anti-government units in Syria. At first, Moscow and Damascus tried to open the eyes of the world community. Now Washington’s claims are made by its allies. Recognition of the former prime minister of Qatar, who said that Washington, Ankara, Riyadh and Doha were from the very beginning in Syria in the same boat, was freshly remembered: they constantly provided weapons to jihadists and coordinated the actions of illegal armed formations.

This time the resounding accusatory slap flew to the States from Ankara. Turkish President Erdogan openly declared support for the Igilovsky murderers, they say, the United States "was very disappointed" and "gave a lot of IG dollars." Something like that a few days ago the Turkish Prime Minister reported, however, he placed the main emphasis on the financial injections of Americans into Kurdish formations. But let's be objective, because the Turks themselves are also not sinless. By and large, they don’t care about the support of Washington igilovtsev and use it only as a pretext for the prosecution. Another thing is when there is a close connection between the Americans and the Syrian democratic forces, half consisting of Kurds, which clearly annoys the Turkish partners.

In turn, Ankara, being one of the guarantors of maintaining the ceasefire regime in de-escalation zones, at the same time tries to resolve the selfish, that is, the Kurdish issue. It is assumed that not for the sake of restoring order, the Turkish troops arrived in the province of Idlib, and today they are concentrated along the Turkish-Syrian border. According to Erdogan, the settlement of Afrin, in which the Kurdish units had long ago settled, should be completely cleared of the YPG people's self-defense units. This voluntary formation is an armed component of the political organization Democratic Union PYD, in fact, the Syrian branch of the Kurdistan Workers' Party, banned in Turkey.

However, if Ankara, explaining the location of troops in Syria, refers to the Astana agreements reached in mid-September, the United States is unlikely to lay claim to military presence, justifying its actions with the protection of the local population and the UN convention on the destruction of the IG terrorists. The behavior of the Western coalition suggests otherwise.

In October of this year, just before the storming of Raqqi, according to news agencies, the Americans, together with the loyal formation of the VTS, organized the evacuation of more than two hundred Igilovs.

This week, the American side, who for some time remembered the provisions of the Geneva Convention, refused to attack the terrorists of the Islamic State, retreating from the Abu Kemal town. Say, militants voluntarily laid down weapontherefore, are entitled to the manifestation of humanity.

But even in this case, the Americans showed ingenuity for the redeployment of militants. According to the version voiced by the Russian defense ministry, the militants were reevaluated to the Kurds on the east bank of the Euphrates.

This is indirectly confirmed by the statement of the operational headquarters of the armed forces fighting on the side of the Syrian army, which spread on Friday the Arab online edition of Suriya al-N. In particular, the news portal states that "almost all the leaders of the Islamic State, including Abu Bakr al-Baghdadi, fled from Abu Kemal to the zone controlled by the so-called Forces of Democratic Syria on the eastern bank of the Euphrates."

It is not excluded that in the near future Washington will try to create in the south of Syria a kind of enclave that would deprive Damascus of the possibility of access to oil and gas resources in the province of Deir ez-Zor.

Needless to say, the Western Allies, who are so illegally in Syria, distanced themselves from the publicly declared goal of fighting terrorism, having fully switched to the solution of selfish issues. At the same time, some of them do not disdain to negotiate with terrorists and provide military assistance to jihadists. Apparently, it is easier to negotiate with the militants than with the legitimate president.

Ctrl Enter
Noticed oshЫbku Highlight text and press. Ctrl + Enter
We are
About Stalin and KhrushchevMilitary reform as an integral part of the security concept of the Russian Federation: Systematic dynamic assessment
10 comments
Information
Dear reader, to leave comments on the publication, you must to register.