November 17 2017
11
Often, it is very difficult to imagine the people who have passed through the crucible of war behind combat reports, numbers of casualties and dry chronology of dates. It is difficult to imagine what they lived outside of reports and orders and what was the heavy work of a fighter every minute of his service, and not just in battle. How, for example, has the war changed itself captain of the legendary battery 394?


Future artillery hero Captain Andrei Zubkov, who arrived at the headquarters, appeared to Georgiy Kholostyakov to be “undignified”, somewhat boyishly angular, impetuous in movements and somehow disheveled. But Holostyakov noted that he very soon became convinced of the young commander’s quick and sharp mind, his firm character and the absence of fear of difficulties.

The deputy commander of the 394 battery, Nikolai Voronkin (holder of the Order of the Red Banner and a member of the Kunikovsky assault force), recalled Zubkov as an amazing gunner with a good theoretical background, which allowed him to independently study the rules of anti-aircraft and ground firing. Andrei Emmanuilovich had an excellent memory and knew by heart all the landmarks of his sectors. Perseverance and composure in this played an important role. 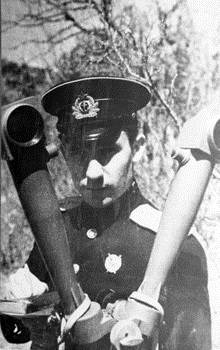 Later, when the Gering flocks plowed the entire height of the battery, Arkady Perventsev, one of the military officers who visited the “Zubkovtsi”, met with the celebrated commander. He already described Zubkov in a slightly different way - a young man of medium height, thin and sharp-faced, with tightly-shaped lips and a stern look with gloomy eyes. On the face of Captain Perventsov, he saw premature human maturity, like a trace of war. Zubkov occasionally smiled in the presence of the military commander, but instantly put out a smile, as something alien. It was during this meeting that the commander honestly admitted that "a little wild got here."

In fact, the Zubkov battery, after endless bombardments and shelling, resembled another planet not only visually, but also in its own way and some other atmosphere, isolated from everyone. In the afternoon, the garrison, already detached from the “mainland,” became even more lonely, since the movement was allowed only to replenish the ammunition, and it, as often as provisions, was routinely harvested before the first glimpses of dawn. The personnel were stationed at combat positions, spotters outside the firing positions of the batteries, the commander and some officers were constantly on the command post.

Only at night, the fighters could go outside, eat and smoke a full, without the risk of being torn to pieces by a random projectile. In the afternoon, in order to maintain strength, having seized the moment of calm, artillerymen could fortify themselves with bread crumbs and sometimes canned food. 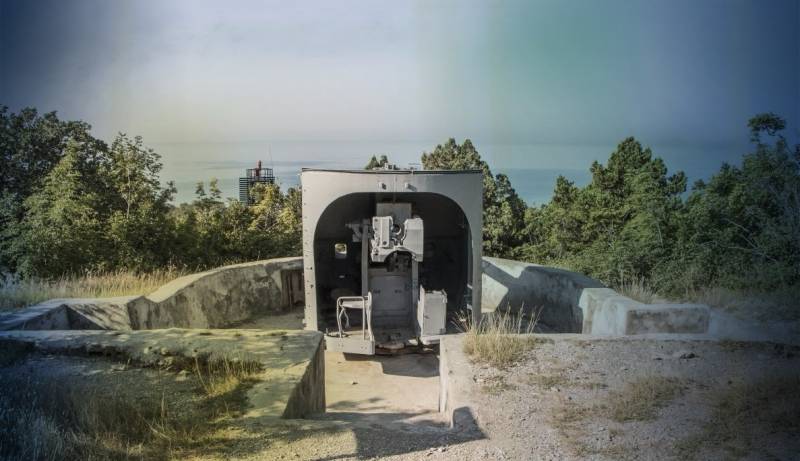 But even at night, the necessary amount of provisions could not be brought to the battery itself. And when the headquarters of NOR requires fire almost every day, and the garrison falling from fatigue asks for food, there will be a way out. Therefore, at night a detachment of battery gunners sometimes descended to the sea and temporarily became a team of poachers who did not have a shortage of explosives. The collected gifts of the sea were sent to replenish the diet. No less ingenuity "Zubkovtsy" showed and in the extraction of water. They simply intercepted one of the branches of the aqueduct that went to Novorossiysk and was functioning at that time.

The very road to the Zubkov battery already resembled something on the other side of reality and was extremely dangerous. The village closest to the battery, the once blooming resort of Kabardinka with neat houses braided by a vine, is located on the shore of a cozy southern bay. During the war she was completely depopulated, was destroyed aviation and artillery. This was followed by about 4 kilometers of the Sukhumi highway, which also suffered from bombing, here and there there were latches sprinkled with rubble, so that the supply vehicles of the advanced units and the “Zubkovtsy” could at least somehow bypass these difficult kilometers. 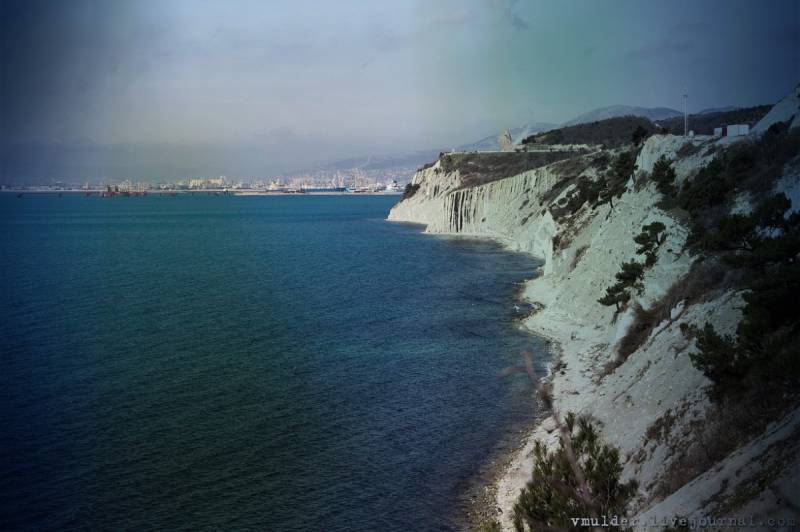 But already directly to the battery they mostly went only on foot. Once thick vegetation burned out, large trees were cut by shrapnel, and some did look like they were cut by lightning.

As if this did not sound crazy, but the Zubkov battery at some point in time was a real shelter for stray dogs and cats. As soon as the Nazis occupied most of the city, civilians fled from Novorossiysk under bombs. Following him, the pets were selected from the boiler that was boiling by the explosions, some were left in a hurry by the owners, and someone's owners were buried under the roof of their own house. So, the battery closest to the front has got its own pets.

Abandoned dogs and cats huddled in numerous craters. As the fighters themselves admitted, at first the pitiful heart-rending howl was simply unbearable, but then the battery workers got used to it. Sometimes Barsikov and Sharikov, who were nailed down, were lured, then they would get the fish head, then a couple of crackers. The wild pets were picky and seemed to wait to be able to return home.

Strange as it may seem, in such conditions the fighters found strength in themselves, but rather felt the need to return, even for a moment, to the reality of the human world, and not the cruelties of war. The sailors of Zubkov willingly made and boasted of the refinement of hand-made cigarette cases made from all sorts of “products” of war (from covering the downed enemy aircraft to artillery shells and other things). As it is very different from the polite habits of glorious allied soldiers to work trophyrs. 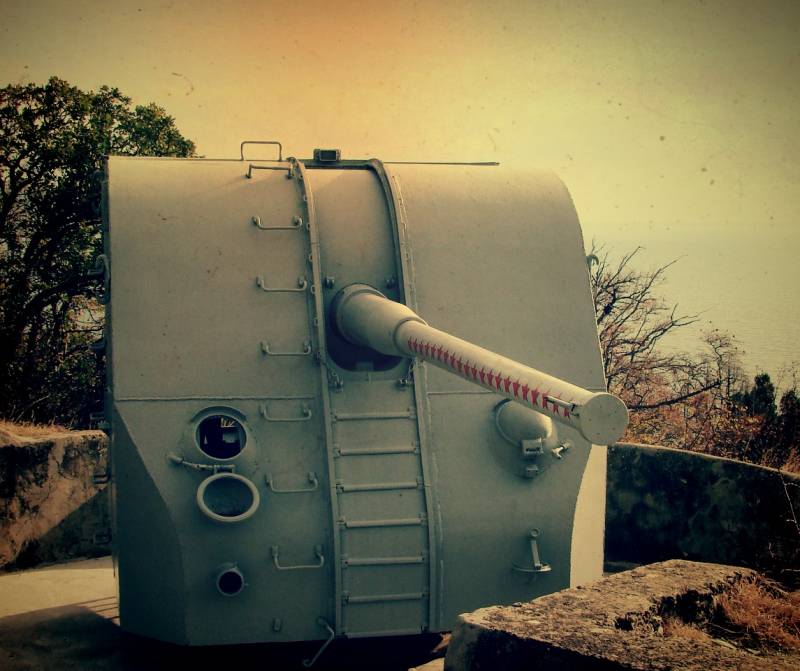 Another tradition of the garrison was to "go on a visit." After long hours, sometimes days, at a fighting post, the fighters torn from each other met with pleasure to share the news their sector of shelling, reading newspapers and letters, in the end, just to poison stories.

Several times, Zubkov’s battery was visited by concert groups of artists and the ensembles of song and dance of the Black Sea fleet. Special guests of the fighters were Arkady Raikin and Rina Zelenaya. The museum still holds photographs of these legendary artists, taken in conjunction with the Red Navy. Of course, such concerts took place at night at the maximum possible distance from the fighting positions of the battery. Several times, even these precautions did not help, the shelling began right during the concert, disrupting the moment of short-lived joy of the fighters.

Particularly noteworthy is the one case described by the already mentioned warlord Perventsev, who is extremely sunk into my memory. When describing the "battery" cemetery, which became the resting place of all the dead battery sailors, one of the fighters compared it to the cemetery of Captain Nemo from Jules Verne's famous work, this place seemed so unreal. And the height of the battery itself was reminiscent of the “Zubkovets” Nautilus. It turned out that even in this war child, this simple guy read Jules Verne, pondered, compared, thought ... Is it not a miracle?

Ctrl Enter
Noticed oshЫbku Highlight text and press. Ctrl + Enter
We are
Reports from the militia of New Russia for 27-28 September 2014 of the yearResults of the week. "Well, do not change me because of every idiot!"
11 comments
Information
Dear reader, to leave comments on the publication, you must to register.