American Marines will be the first to fight the Russians

November 14 2017
185
US marines prepare for conflict in Eastern Europe: The US Marine Corps is considering the prospect of an armed clash with Russia. In connection with the looming conflict, additional resources will be received by the headquarters of the Expeditionary Force of the Marine Corps. 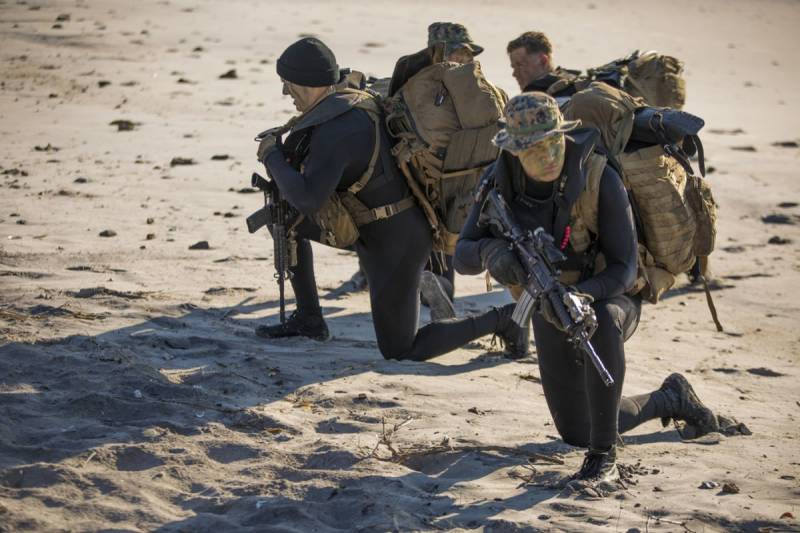 The prospect of a “conflict with the Russian military” in Eastern Europe pushed the US Marine Corps to increase its combat capabilities. This should deal with the headquarters of the high level marines.

According to the general, MEF units "must be prepared" to support efforts to counter the "war in Europe." Hedelund said this at a recent annual conference on national defense.

The publication reminds us that in recent years, the US Marine Corps has already expanded its presence in Europe (in Romania, as well as the deployment of back-to-back in Norway, where the marines mentioned will provide security “near the Russian border”).

Hedelund believes that the Marine Expeditionary Force must maintain mobility and be able to carry out crisis response missions. The general proudly showed to the conference participants the “extensive geography” of the activities of his units in Asia, Europe, Africa, and South America.

He recalled that summer exercises in California had already “united” US marines with British, Canadian and French forces. Here are the questions that US marines should know: “What is the enemy doing? What do we want him to do? How can we make him do it? ”

The “European mission” of the Marines is changing “against the background of Russian aggression,” according to the material. At the moment, the Corps will continue to prepare and deploy "for a number of missions." The general hints: they say, if somewhere ("anywhere in the world") a shot is heard, "the marines want to be there."

While the US marines are preparing to repel the Russian attack in Eastern Europe, NATO may be thinking about a real war with Russia. At least, other foreign analysts have compiled a whole list of those “threats” that are no big deal to NATO strategists.

“Is NATO preparing for war with Russia?” This question was answered by renowned expert Stephen Lendman in the Canadian edition Global Research.

Bilateral relations between Russia and the United States are still "dark." Will the cold "war of words" go into a hot collision? weapons?

The expert listed the "hostile actions" of the United States against Russia. This, in his opinion, includes the deployment of NATO forces near the Russian border and violation of the Treaty on Conventional Armed Forces in Europe (CFE, 1991), which limits the presence of traditional military equipment in Europe. The expert’s list also includes the holding of “provocative military exercises in bordering countries” and the use of Estonia, Latvia, Lithuania and Poland as “training sites for NATO-led wars”.

Americans "are preparing for a hybrid and conventional war with Russia," "inflating a non-existent Russian threat"; waive the Anti-Ballistic Missile Treaty (ABM); violate the 1987 Medium-range Nuclear Weapons Treaty of the Year by creating “weapon systems” that violate treaty obligations; falsely accusing Moscow of “aggression” in Ukraine; seize Russian real estate in the United States and expel diplomats; falsely accusing the Kremlin of interfering with last year’s US presidential election; impose "illegal sanctions" on Russia and interfere in its internal affairs. And this is not to mention the "unscrupulous persecution" of Vladimir Putin!

All of the above and much more should really “scare everyone”: after all, American neocon hawks dictate a geopolitical agenda. America is truly a military state, the author is sure, who is leading “endless aggressive wars at the same time in several theaters”. Washington wants all sovereign independent governments to be replaced by "pro-Western puppet regimes." So it should be "in Russia, China and Iran."

According to the Wall Street Journal, the United States, dominating NATO, intends to strengthen its ability of Russia's military confrontation, the expert continues. For this two events are held. To begin with, NATO logistics is being modernized, for which a special “command” is being created. The deployment and movement of troops and military equipment will now occur "more quickly." The second new "command" will focus on "protecting the sea routes from the Atlantic to the Arctic Ocean." The headquarters of the new commands will be located in the Netherlands and Italy.

Pentagon commanders want all NATO members to act “against the Russian troops” quickly and efficiently.

NATO Secretary General Jens Stoltenberg said that the deployment is a direct response "to Russia's aggressive actions in Ukraine, its military build-up near our [NATO] borders and the lack of transparency when it comes to military exercises such as" West 2017 " .

The military power of Russia is also discussed in the article by Dave Majumdar, who referred in his article to "The National Interest" on intelligence data.

Why is the US intelligence community afraid of Russia's growing military power? This question was answered by the browser.

In the long term, Russia "really seeks to once again become a great power, as it was during the Russian Empire, and then in Soviet times." At least, analysts from the Pentagon’s defense intelligence agency, whose report retells Dave Majumdar, think so.

The United States Department of Defense Intelligence Agency (RUMO) has announced a new assessment of Russian military power. This document "revives the practice of the Cold War." RUMO concluded that the modern Russian military machine is based on the Soviet legacy, but the possibilities have already been modernized, and with them the military doctrine has been changed. The Russians "modernized their military strategy, doctrine and tactics to introduce the use of asymmetric responses, such as cyber attacks and hybrid actions similar to those observed in Ukraine," the report says.

Today’s Russia is trying to reduce its dependence on nuclear weapons, is rebuilding its traditional forces and using modern high-precision munitions. This allows Moscow to create a "more balanced" military machine. Moscow itself emphasizes the development of conventional precision weapons. Recently, such has been tested in combat conditions in Syria.

"Russia's desire to become a leader in a multipolar world and regain the status of a great power, which it had in tsarist times and until the last days of the Soviet Union, requires the presence of force capable of restraining aggression, fighting in a different range of conflicts, from local crises to nuclear war, the ability project power and use force, if necessary, when intervening in conflicts around the world, ”concludes the report. Russian power is being created "despite the economic downturn."

The Russians are doing everything to become a “great power” again.

In general, this report of the department Madzhumdar finds "crazy." Back in Soviet times, such reports were full of “gross exaggerations”, probably due to the mistakes of American intelligence.

It seems that in the US, not only intelligence officers are crazy. In the Marine Corps, which set out to repel Russian attacks in Eastern Europe, all is not well with the mind.

However, that's what the cold war is for its apologists to demonstrate a massive clouding of reason.

Observed and commented on Oleg Chuvakin
- especially for topwar.ru
Ctrl Enter
Noticed oshЫbku Highlight text and press. Ctrl + Enter
We are
Are there any prospects for the "flying party" CP-10?USMC
Military Reviewin Yandex News
Military Reviewin Google News
185 comments
Information
Dear reader, to leave comments on the publication, you must sign in.