November 10 2017
149
Read the article by Evgeny Leonov “Honest survey»And decided to reply to the author, but not in the comments, but as a separate article, since The topic, in my opinion, is important and very relevant. I think many interesting today. 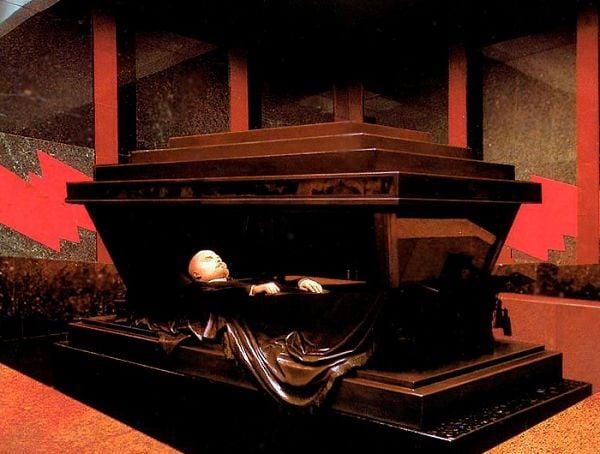 Comparison of the relics of saints with the mummy of Lenin is considered incorrect. Eugene writes that both the relics of the saints and the body of Ilyich are symbols, objects of worship of people for whom the identity of the deceased was and remains an important element of our storieswho honor and respect the contribution of this person to the development of the country and the people. Such a statement reveals the author’s misunderstanding of the meaning of Christian veneration both the saints themselves and their relics. This, by the way, is a common feature for all those who today are trying to polemize on this topic. They, not understanding the essence of the Christian cult of the saints, nevertheless calmly give him an assessment and draw parallels.

In fact, for Christians, a holy man is one who, during his lifetime, acquired the Holy Spirit, that is, reached the level of holiness that the Holy Spirit dwelt in him, so abundantly, that the body was perishable with its energy (by grace, in our ). With this energy, the saint during his lifetime worked miracles, healings, etc. And after his physical death, the Spirit of God continues to work through his remains. Now it’s not about whether it’s right to believe in this or whether it’s all wild superstition. I just want to explain to the readers and the author of the above article the essence of the Christian understanding of these things, so that they understand how much the body cult of Ilyich differs from it.

Even according to formal signs, the veneration of the relics of the saints and the body of Lenin are very much different. The relics of the saints are exhibited for worship in temples and monasteries, i.e. in places where Christian believers go. Let us go down to vulgarity and say that these are “interest clubs” for believers where they come, united by common values. They do not run through the streets (as opposed to sectarians) and do not invite passers-by to their divine services, they quietly come to the place where they can, including worshiping holy relics. The body of Ilyich is displayed on the main square of the country as a kind of national shrine, a national symbol.

And the most important difference is this. Christians believe in God, they believe that the Holy Spirit adored a man for his virtuous life or sacrificial feat, and thereby sanctified his body, which after death is not subjected to corruption. When worshiping the relics, Christians do not worship the body, but God, who consecrated this body and created its miracles through it. And to whom do atheist communists worship as the mummified body of Ilyich? After all, they do not believe in the afterlife, nor in God. So why do you need this cult, whose is it? Who do they worship, coming to the mausoleum and standing at the coffin with a lifeless body, which, according to their own views, is nothing more than a piece of meat, in which the process of decomposition is inhibited by the influence of chemical compounds?

To bury Lenin's body or not, only his relatives could decide in a good way. But since there are no such people left, and, considering that there are really a lot of people who honor him and want to be able to come to his body and worship him, then it would be quite possible not to bury him. But forgive me, leaving it on the central square of the country in the form of a national symbol is a bust. Please make a separate crypt on Vagankovsky or else where and put it there, let the fans walk and bow. But to compare the worship of the relics of the saints and the embalmed corpse of a man whose activities, in the opinion of a great number of our fellow men, were clearly anti-popular, at least absurd. Moreover, to make these two phenomena the subject of a survey, linking one with the other.

Finally, the last. The author, summing up, writes: "Either we take into account the interests of all, or every man for himself, and farewell to the state." Handsomely. But why then do not take into account the interests of the same LGBT activists? There are people for whom the phallus is a deity. Well, they have that right. And if they want to establish a phallic idol somewhere in Moscow, even if not in the center, then no one has the right to interfere with them. Why are we against gay parades then? Don't people have the right to show what is dear to them? Do you understand what I'm getting at? To the fact that if we allow everything to everyone just because “there are people who believe in it,” it is then that we will receive “goodbye, the state”. And by the way, thanks to the efforts of Ilyich, we almost got it 100 years ago. And the consequences of his national policy are bleeding now in the Donbas.

The state should have one dominant value system. Yes, there are many peoples and faiths in Russia, it has always been so. And they should all have a place in Russia. Your place! And the strange cult of Ilyich, since he still has his followers, must have his place. And it is clearly not in the center of the Russian consciousness.

Ctrl Enter
Noticed oshЫbku Highlight text and press. Ctrl + Enter
We are
About Stalin and KhrushchevWhat you didn't want to know about England
Military Reviewin Yandex News
Military Reviewin Google News
149 comments
Information
Dear reader, to leave comments on the publication, you must to register.