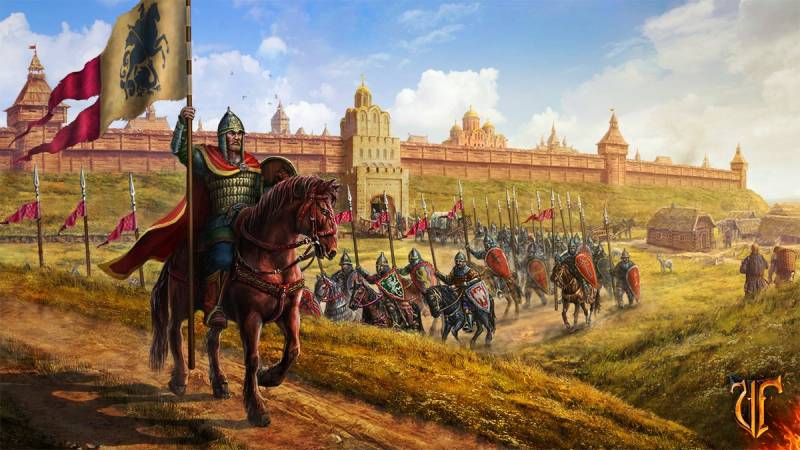 By the middle of the XI century, the nomadic Turkic-speaking people of the Polovtsi closely approached the eastern and southern borders of the ancient Russian state.

The first contact between the Russians and the Polovtsi was peaceful, the Kiev prince Vsevolod, the son of Yaroslav the Wise, made an alliance with them against the common enemy of the Torks.

After the victory over the Torks, the Allies fell out, and, starting with 1061, an armed confrontation began between them. If the first clashes were considered by the parties as a border conflict, then later they turned into a real war.

In September, 1068, in the battle on the Alta River, the combined Russian squads suffered a defeat from Khan Sharukan. This defeat led to a complication of the domestic political situation in the principality of Kiev. The Kievans, who suffered a lot from the Polovtsian raids, were still ready to defend their land, and they turned to Izyaslav with the request:
"Here are the Polovtsians being ruled in our land ... So let me, prince, to us weapon and horses, and we will fight them again! ”

Due to Izyaslav's refusal to organize a new campaign against the nomads, an uprising broke out, during which the Polotsk prince Vseslav Bryachislavich, who was languishing at that moment in Kiev captivity, was brought to power.

Vseslav, whom popular rumor endowed with extraordinary abilities, however, could not solve the Polovtsian problem. The nomads continued to make devastating raids on the Russian principalities.
In order to secure the southern frontiers of Russia, the Chernigov prince Svyatoslav spoke against the Polovtsy with a large, three thousand troops. He was the third son of Yaroslav the Wise, and together with his two brothers was one of the three persons of the Triumvirate of Yaroslavich.

The forces of the enemy, according to Nestor the chronicler, were 12 thousands of people, i.e. outnumbered Russian four times. Before the battle, Svyatoslav Yaroslavich addressed the soldiers with the call: “Let's fight! We have nowhere to go! ”

The battle took place on November 1 1068 of the year on the river Snov, near the town of Chernigovsky inheritance Snovsk (now Sednev). The Russians struck first, broke the Polovtsy, many of whom drowned in the river during their flight. The Polovtsian Khan himself was taken prisoner, Nestor the Chronicler does not name him, and the Novgorod First Chronicle says that it was Sharukan.

The Russian revenge was the first known victory over the Polovtsy, the threat looming over Russia after the defeat at Alta, was eliminated.

Ctrl Enter
Noticed oshЫbku Highlight text and press. Ctrl + Enter
We are
“Why are we destroying the Russian land?”Boleslav II the Bold and Izyaslav Yaroslavich against Kiev
Military Reviewin Yandex News
Military Reviewin Google News
15 comments
Information
Dear reader, to leave comments on the publication, you must to register.