On the Aurora Shot: Do not give trump cards to Russophobes

November 7 2017
123
A century has passed since the historic Aurora shot. Shot changed history not only Russia, but the whole world. No matter how anyone feels about this event, his epoch-making is not able to deny even the most ardent anti-Communists and the most notorious Russophobes. 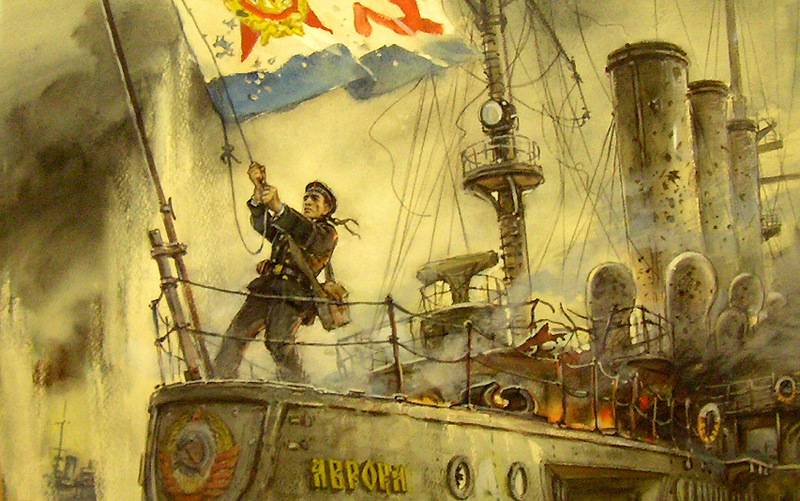 It is characteristic that anti-communism and russophobia too often go in the same team. The old “fighters against communism” in the West (especially in the USA) very quickly repainted into “fighters against the Russian threat”. Slogans have changed, but the essence has not changed. These forces do not want to see Russia strong, so the Soviet Union was hostile to them, so the independent actions of today's Moscow on the foreign policy arena are hostile to them.

The link between anti-communism and Russophobia in Ukraine can be seen most vividly, especially after the so-called “Euromaidan”. Of course, earlier there were acts of vandalism on the part of Ukrainian nationalists in relation to monuments to both Pushkin and Lenin. But today all this is already declared at the state level. A similar picture can be observed in the Baltic countries, as well as in Poland, where the law on the demolition of monuments to Soviet soldiers was recently passed.

There are, of course, in Russia many who, seemingly, loving their Homeland, in every way blackens the Great October Socialist Revolution. But the denial of this event, as well as the subsequent years of the Soviet era, is a voluntary or involuntary play into the hands of those who seek to see our country weak, dependent on someone else's will, unable to say its word in the world. As for appeals to liquidate Lenin’s Mausoleum and the necropolis on Red Square - oh, how happy Maidan horses and vandals will be! After all, this will be the actual recognition of their rightness ...

You can blame the Bolsheviks that they also demolished the monuments to the kings, blew up the churches, dekulakized middle peasants. Yes, a lot of what you can blame. However, all this was in the initial stages of the Revolution, when the mutual hatred of the “red” and “white” was especially fierce. It is unacceptable to talk about red terror, silent about white. It is inadmissible, using the excesses of the early period of Soviet power, to denigrate the entire socialist era, and even more so - the ideas of social justice in general.

It is impossible not to see that it was precisely during the Soviet period that both the elimination of illiteracy, the implementation of the electrification plan for the whole country, the Great Victory over fascism, and the first manned flight into space were realized. Not to mention such “trifles” as the right to work and to rest, as free education and medicine, as mass housing construction, as broad social guarantees to citizens. It was all born precisely on the night when the Great October Socialist Revolution occurred, which gave the opportunity to start building the first state in the world of workers and peasants.

There were flaws in the implementation of ideas in practice. Yes, in some years there was a shortage of consumer goods. There was an excessive bureaucracy ... Housing was underdeveloped. Cybernetics was declared pseudoscience, which, unfortunately, led to a lag. There was a lot of things. And at what time and in which country was everything absolutely perfect?

And was life in the USSR as hopeless as we are trying to impress? With all the shortage of festive delicacies and even some varieties of sausage - was there at least one settlement in the era of developed socialism where people would really go hungry? Not. The person who received even the minimum wage was guaranteed to be full, dressed, had the opportunity to pay for housing and travel, could receive medical care. Only now the grave-diggers of our great Epoch prefer to keep silent about this, who declare it all almost a complete evil - from the 1917 year to the 1991.

But then we all witnessed how quickly society degraded after the destruction of the gains of the Revolution, under the so-called “democracy”. How quickly began uncontrolled privatization, which turned into privatization. How the store shelves were filled with goods, but amid this abundance, one million per year died out. As people went to these stores, like in museums. As prices grew - and continue to grow - day by day. The consequences of "democratization" Russia can not overcome to this day. What can we say about the other Republics of the destroyed Soviet Union, where the situation is even worse?

In any case, those who do not see the great deed of the Russian people in the October Revolution, in practice, are not far from the crazy crowd with torchlight processions, shouting "Moskalyaku to the Gilyak" (together with the similar slogan "Kommunyaky to the Gilyak"). Who condemns the Soviet period, which is very important in our history, gives food to the most notorious anti-Russian forces. These anti-Russian forces see the whole “barbarism” in the whole history of our country, and in the Soviet period - the continuation of this “barbarism” (reducing this period only to the excesses of the first years, to the notorious GULAG and denying the achievements and social gains).

In Soviet times, there may have been an erroneous denial of the positive that was in previous periods. For too long, the traumas of the injustice that prevailed in pre-revolutionary times remained in the memory of the oppressed. But, if we recognize this denial as erroneous, then why do we consider the equally total denial of decades of socialism acceptable?

Burp 90-x - the constant exaggerated exaggeration of the topic of victims of political repression; calls for the destruction of the Mausoleum and monuments to V.I. Lenin and other leaders of the October Revolution; the disparate commemoration of writers loved in the West in their time, like Solzhenitsyn; films that distort the history of the Soviet period give powerful support to the Russophobic forces abroad and, in the end, harm our country during the current round of global confrontation. If we want to stand in the midst of the current world storms and continue to win victories, there is no need to give the enemy such trumps. On the contrary it would be worth reconsidering the attitude to the Great October Socialist Revolution at the state level and rehabilitate those who were so unjustly slandered in the years of "democratization." The Soviet era and its gigantic achievements could be ours weapons in the information war.

So - with the holiday! Happy November 7!

Ctrl Enter
Noticed a mistake Highlight text and press. Ctrl + Enter
We are
Happy Birthday, Aurora! 120 years since the beginning of the construction of the cruiser"Aurora" headed for the maximum task
123 comments
Information
Dear reader, to leave comments on the publication, you must to register.